Once you've taken a trip with an organization, you can be sure that every week or so there will be an enticing brochure in the mailbox describing upcoming programs. We ignore most of these, but one that showed up in late 2015 described an upcoming adventure with Stanford Alumni and Zegrahm Expeditions was too good to ignore. The destinations were Iceland, home of the famed Icelandic horse, and Greenland. Sign us up!

Early on I decided that a day of riding was mandatory. There were numerous riding programs offered on the WWW. Since I had no way to identify which was the best, I asked the folks at Zegrahm to set it up. They made a great choice!

After several months of anticipation, we headed out on 26 July for our latest adventure. I've cribbed the map from the Zegrahm web site lest they eventually take down the page on this trip. It gives an overview of our itinerary: 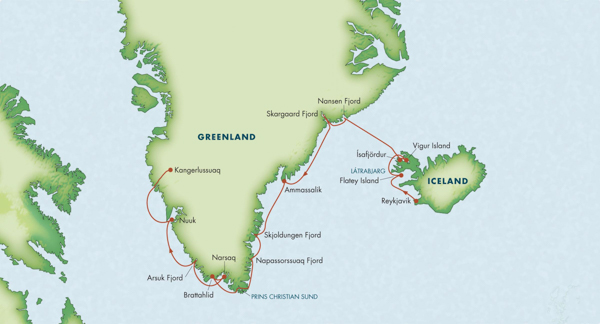 Before I begin, a comment on language. Usually I make it a point to learn at least how to pronounce the various places we visited as well as pick up a few phrases. I don't know if it is a function of age or laziness, but I failed to do that throughout this trip. The only two Icelandic words I learned to pronounce were: Reykjavik (pronounced WRECK-yah-vik) and takk, which is "thank you" and is pronounced TAHK. Greenlandic, of which there are East & West variants, was even worse. I only got a few of the simplest place names and no words or phrases whatsoever.

As usual I took very many pictures (because it was ALL so interesting), but here are the highlights (only one or two pictures from each day):

Now the details for those who have the time & interest.