Látrabjarg is the largest bird cliff in Europe. That implies that there are larger one elsewhere. The mind boggles! 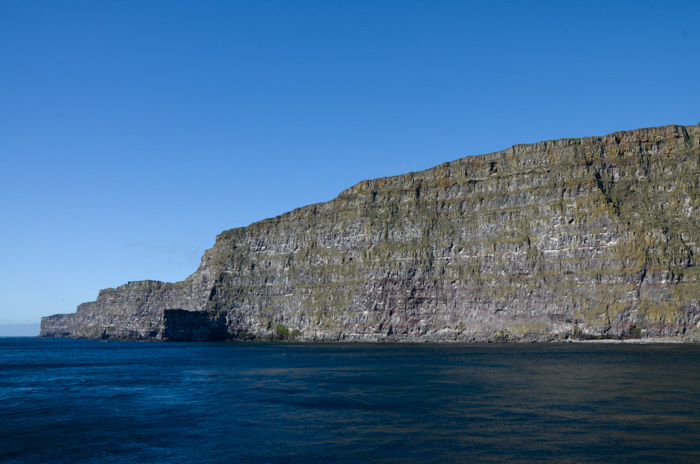 The cliffs are 14km long and up to 441m high. That's almost nine miles by 1440 feet for those of us who are trapped in the illogical and irregular English system.

Successive volcanic eruptions formed the horizontal ledges. These ledges are home to millions of birds and almost half of the world's population of some species.

The cape formed by these cliffs is the westernmost extent of Iceland. 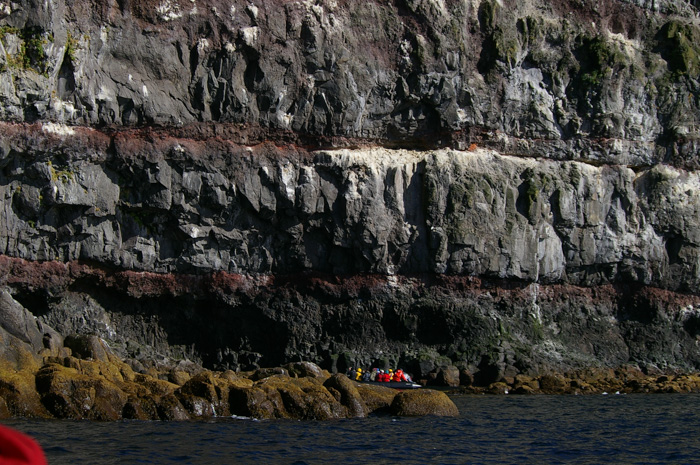 We loaded into Zodiacs for our up close and personal visit to the birds. We saw harlequin ducks, guillemots, phalaropes, puffins, razorbills, sanderlings, shags, and countless gulls. Birds are nesting in every conceivable (and some inconceivable) crevice.

Sometimes parents may choose a location that isn't quite large enough for safety. We passed more than one bird that had either fallen out of its nest or had a fatal mishap on an early flight attempt.

In places the seaweed made a seemingly impenetrable mat. 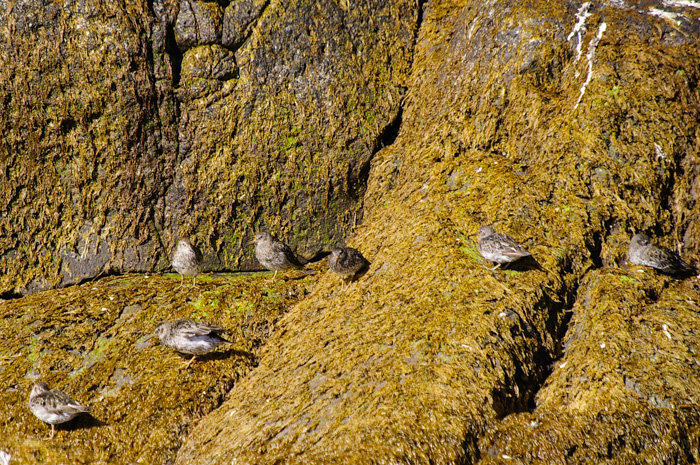 These small sanderlings scurried around on this mossy rock. 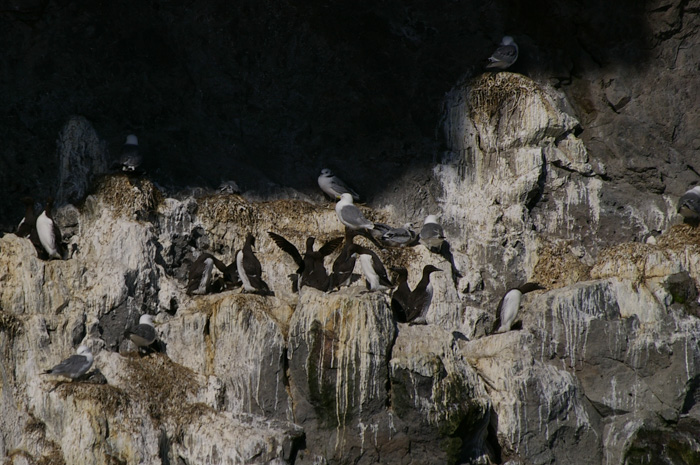 A colony of common guillemots tucked into a ledge along with some kittiwakes. Guillemots swim underwater better than they fly. Chicks leave the nest by fluttering to the water accompanied by their fathers. They head to sea together. The mother stays near the nest longer. Both parents moult after breeding and are unable to fly (in the air -- they can still dive) for a month or two. 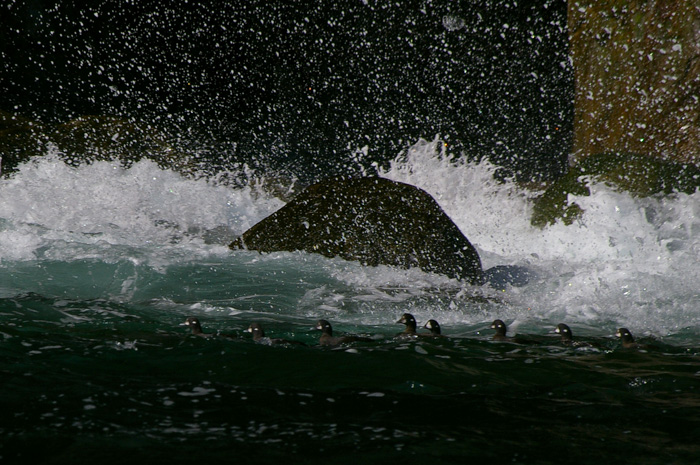 This little flotilla of female harlequin ducks were a hoot They swam amazingly fast, always stayed together and ducked (so to speak) behind every available rock and inlet. The pounding surf didn't seem to bother them at all. 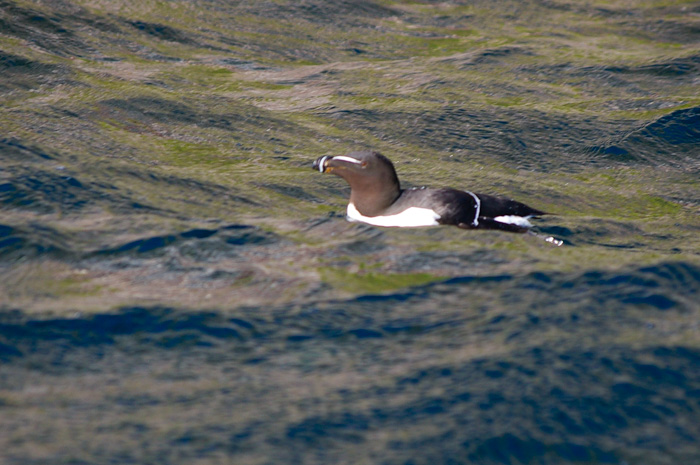 A razorbill. According to Wikipedia, 60-70% of the razorbill population breeds in Iceland. It is the only survivor of what was once a more diverse genus. 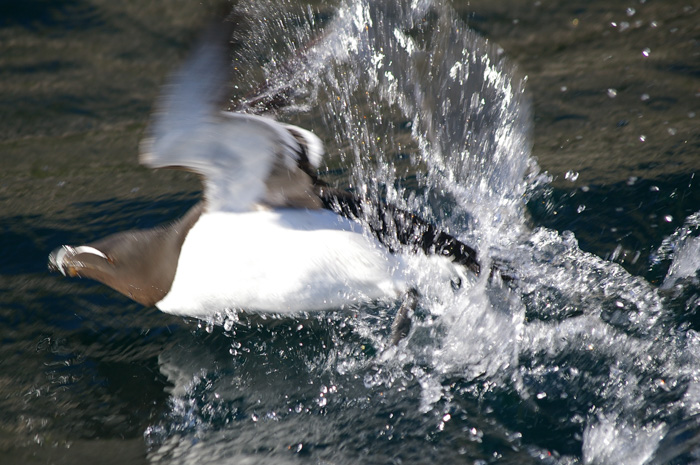 That same razorbill taking off. It's hard work getting airborne!

The colors of the water, reflecting the vegetation on the cliffs and the blue sky, are as fascinating to watch as the birds. 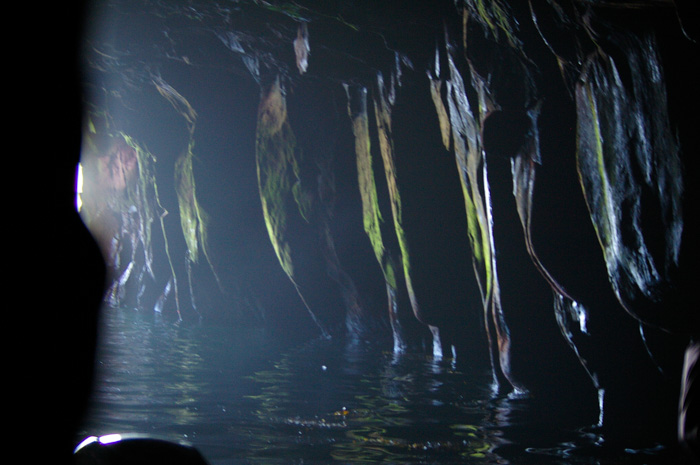 At one point along the cliff we found a cave that was just too tempting.

Our Zodiac proceeded slowly in the darkness, but we soon found that we didn't have enough light to continue. We turned around only to bump into another Zodiac that had followed us.

We were almost out of the cave when our engine died! That led to some tense moments but our driver got it going again after a short while. 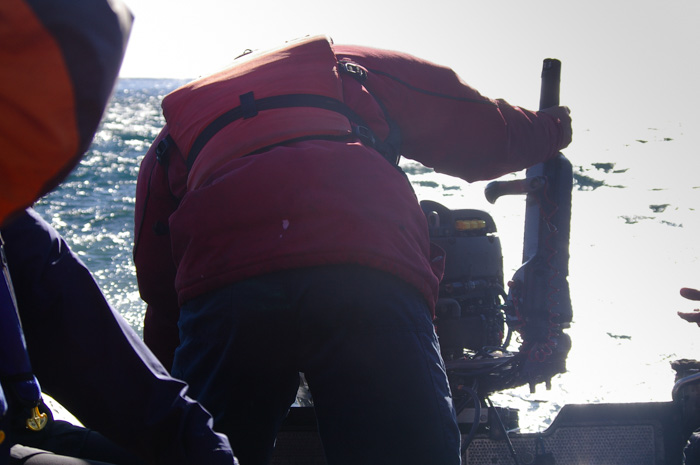 Luckily we got out of the dark tunnel because it didn't take long before our engine died again and wouldn't restart!

The wind and surf drove us onto some rocks at the base of the cliffs. We were never in any danger because these are very sturdy craft and the surf wasn't enough to make us concerned about flipping over, but we did get well-splashed! Thank heavens for water-proof pants & jackets.

One of the other Zodiacs came to our rescue, pulled us out of the rocks, and waited until another Zodiac could be sent from the ship. We wondered if we would have to make a watery transfer, but the other Zodiac brought a mechanic who proceeded to dismantle part of the engine, tweak this & that, and kick it into life again.

We limped back to the ship under our own power accompanied by the mechanic's Zodiac. It was an adventure.