An extensive Norse settlement was located at Narsaq. It is one of the few places in Greenland where more-or-less extensive farming is possible. Recently deposits of rare-earth minerals have been discovered in the area and mining is possible. As is often the case, the benefit/problem ratio of mining is controversial. Much of the controversy focuses on radioactive elements such as uranium and thorium. 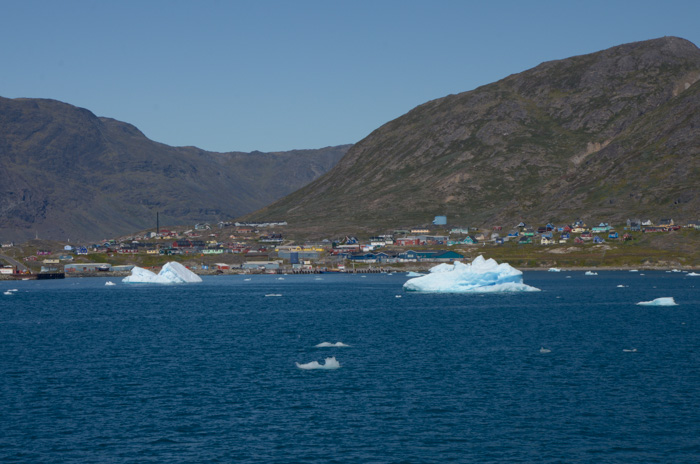 Like other Greenland towns, Narsaq is filled with colorful houses. At one time the colors had meaning. For example, yellow identified the home and office of the doctor. This "code" has fallen out of use and people paint their houses to suit themselves. 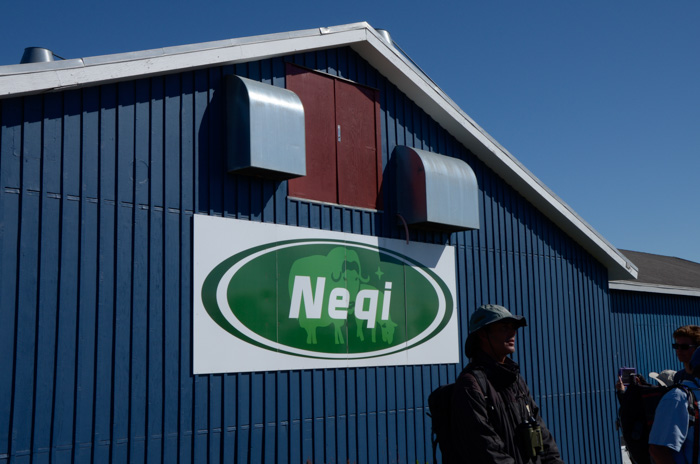 One of the mainstays of the economy is this slaughterhouse, the largest in Greenland.

This company is seeking to develop the mining potential.

Our geologist Tom was beside himself with excitement over possibly finding unusual rocks along the beach. 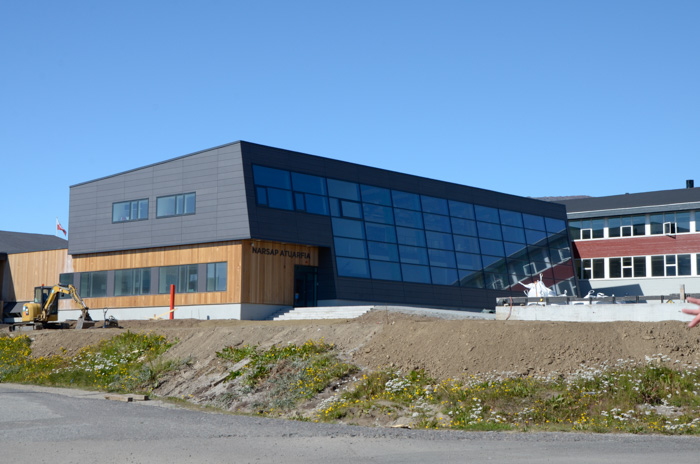 The new school is close to completion. 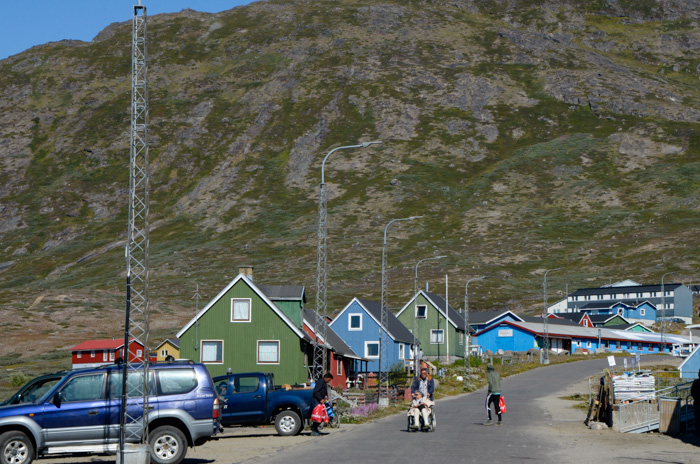 I was startled by the industrial street lighting in this residential neighborhood until I realized ... it is dark much of the day for much of the year! Lighting is essential.

It is Sunday and many folks were out enjoying the warm weather. 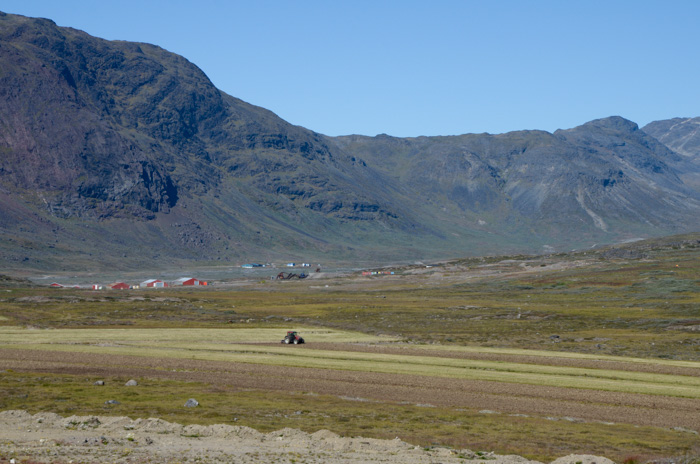 The plain outside of the town was home to intensively farmed fields.

We had seen fields in Qassiarsuk, but they were primarily to grow hay for the stock. These looked like they were set up for other crops. 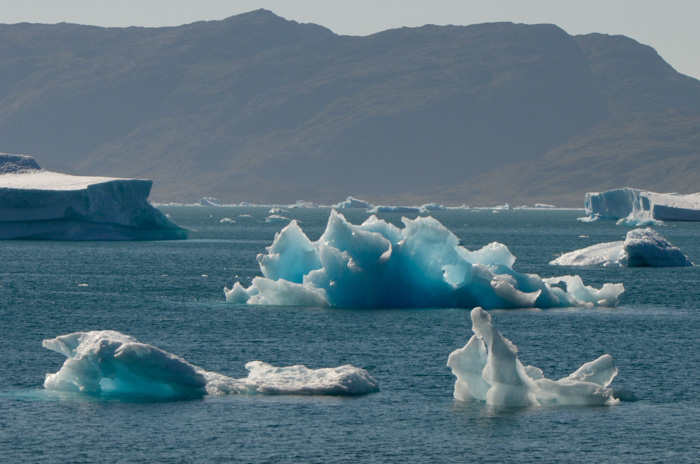 The long walk for the day was ostensibly to visit an unexcavated Viking site. The length of the walk meant that we would not have time to return to town to meet the Zodiacs, so we were to be picked up on the other side of this ice-choked inlet.

The varying expectations of the individual walkers, however, caused confusion. Some people signed up for the walk, but decided to stay behind in town. Some had in mind a brisk four mile walk on a flat road to the ruins with the major goal of simply stretching our legs (count me in this group). Others, including Tom, our leader, had a notion of exploring along the beach for varied and potentially rare geologic specimens.

The divergent goals meant that the group quickly splintered. I hope everyone had as satisfying time as I did -- it was a pleasure to step along without worry of falling over a rock or tripping over a dwarf tree of some kind or the other -- not to mention a polar bear encounter. 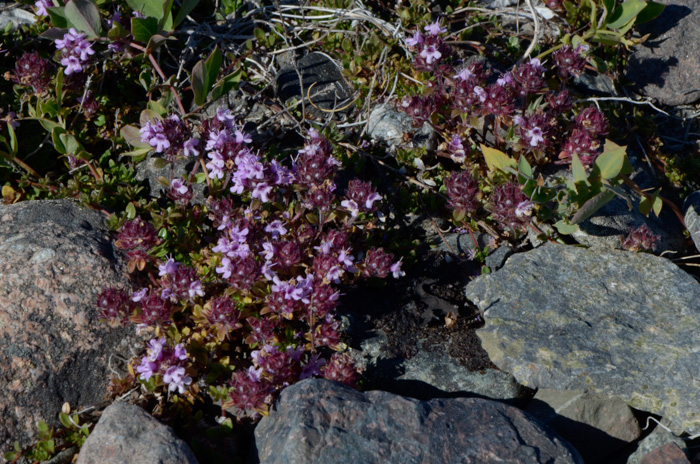 I have pictures of several life stages of this plant, but I've been unable to identify it. Like it though. 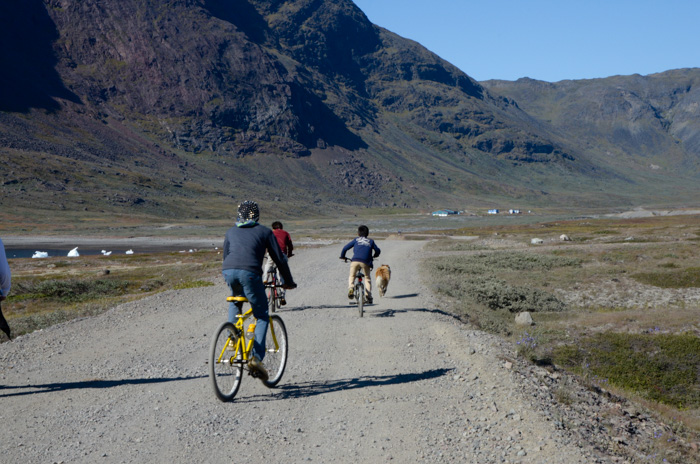 While on the way these youngsters went screaming by with their dog. They seem to be having a great time.

We didn't get close enough to the buildings up the valley to figure out what they were. 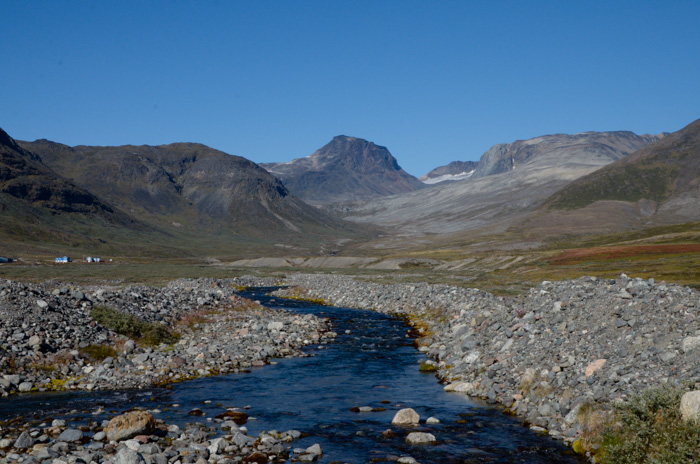 This was the most expansive region of flat-ish and potentially arable land that we saw in Greenland.

I'm pretty sure this is yellow mountain saxifrage. 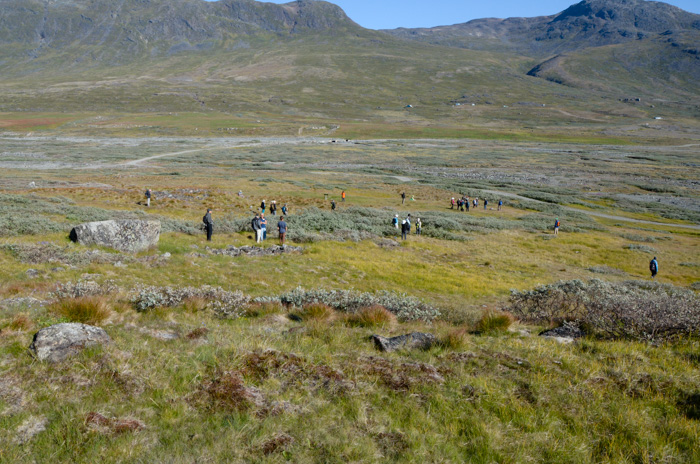 The area of the ruins, unexcavated and poorly marked, has been identified with Dyrnæs Church.

This would have been prime sheep country for the Norse. 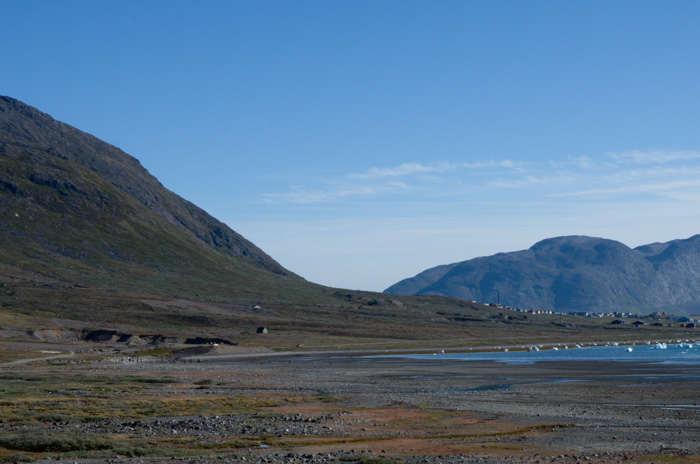 Those of us who were stretching our legs far outpaced the rock-hounds, who came slowly along the beach examining and even collecting geological specimens. They are the itty-bitty dots in front of the gully to the left of the image.

Tom said that he had never had so many professional geologists on a trip before, so I'm sure he was delighted to be among kindred spirits. 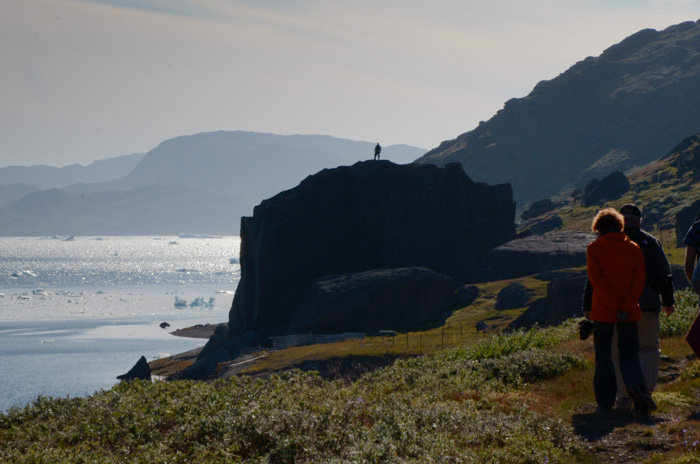 But it was time for us all to be headed back to the ship. The team had selected a landing point where we could meet our Zodiacs without having to return to Narsaq. It was under this massive rock.

The only place that expedition leader Russ could communicate with the ship was atop the rock, so whenever he had to make contact, he had a scramble up.

The ship is out of sight behind the spit of land in the distance. To get there, the Zodiacs will have to negotiate the ice-choked inlet. It made for a beautiful ride. 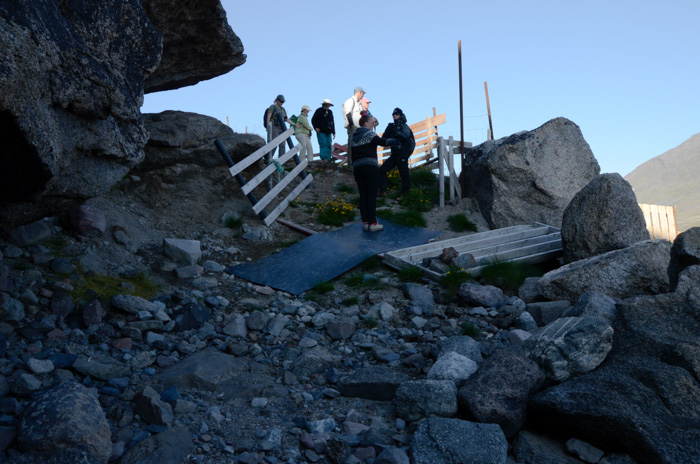 First we had a harrowing scramble down to the landing site. Trust me, this slope was a lot steeper than it looks! Staff people stationed at strategic points helped us over the worst spots.

I mentioned earlier that some of the folks who had said they would take the long walk decided to stay in town. This caused difficulty with life jackets. Since we were returning from this different location, the walkers' life jackets were collected separately at the disembarkation point. That meant that there weren't enough at the Zodiac landing in Narsaq. The staff had a juggle to get the right number of life jackets to the right places. Jim, who had decided to remain on board, said that there was quite a bit of buzzing around looking for spares. 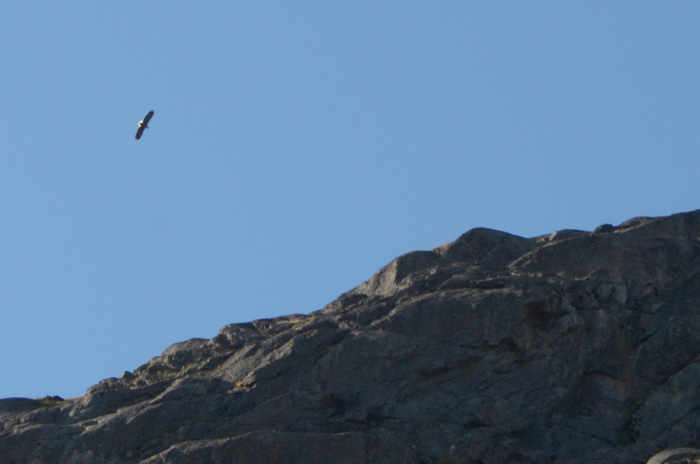 While waiting to depart, we saw a white-tailed eagle. They are closely related to our bald eagle. As a cross-word buff I have been acquainted with the "erne" for many years and now I've seen one.

The population in southern Greenland is distinct but not considered a separate species.

There is a long-term friendly rivalry between Tom Sharpe our geologist and Jim Wilson our ornithologist. Tom will occasionally make a snarky comment about "just another bird" and Jim will come back with "just another rock."

Jim was as excited about the eagles as Tom was about the rare-earth specimens.

Russ Evans was our very excellent expedition leader. He must be one of the hardest working folks I've ever met. I'm not sure when he got any sleep on this trip, if in fact he ever did. He and the rest of the team did a great job.

Note the polar bear deterrent in the bow of the Zodiac. 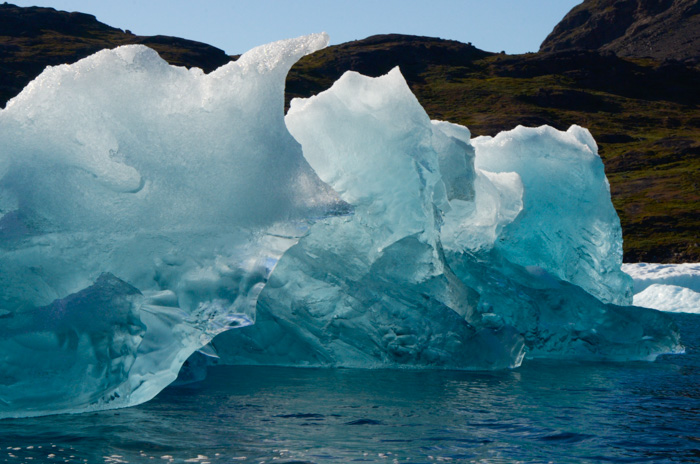 As noted above, our trip back to the ship was through the ice. We enjoyed the bergs immensely.

This is my second-favorite iceberg of the trip. (Unfortunately I didn't get a picture of my most favorite.)

It glowed with glacial blue and was gem-like in its clarity.