Our passage to Greenland took overnight and part of the following day. Nevertheless there wasn't much downtime. If we weren't taking in the magnificent scenery or watching for wildlife (or eating!), chances are there was an informative and entertaining lecture by the expedition staff.

The staff told us NOT to expect polar bears in Greenland. Well. In this one fjord we saw about a dozen including a mom and her two cubs! Even though you couldn't prove it by us, the polar bear population is declining due to environmental pollution and loss of critical sea ice habitat to warming sea temperatures.

This was our first sighting. Polar bears are well adapted to swim moderate distances, but decreased ice cover in the polar regions is forcing many on long distance trips. The longest documented swim is 426 miles in 9 days without stopping. Such trips are devastating to the bears that survive them. 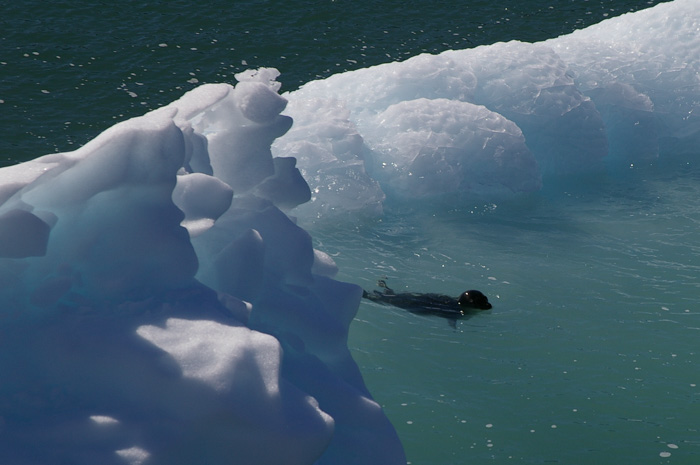 This seal was tucked away in an ice floe not far from the swimming bear.  I don't know if the seal knew about the bear, but if the bear had known about the seal I'm pretty sure he would have made an effort (probably futile) to capture it. The seal laid low for all the time that I watched it. 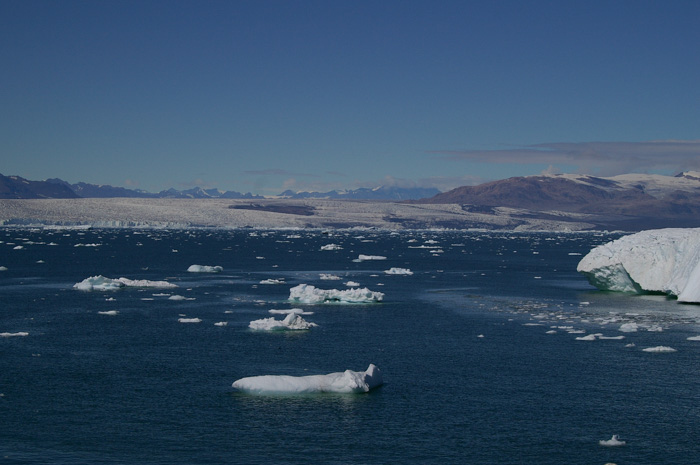 After leaving the bear in peace we proceeded farther into Nansen Fjord.

Icebergs large & small had calved off the many glaciers. Our goal was to find a place to land and explore.

Weather luck continued. On this particular day storms passed both north and south of us, but we had sunny skies. 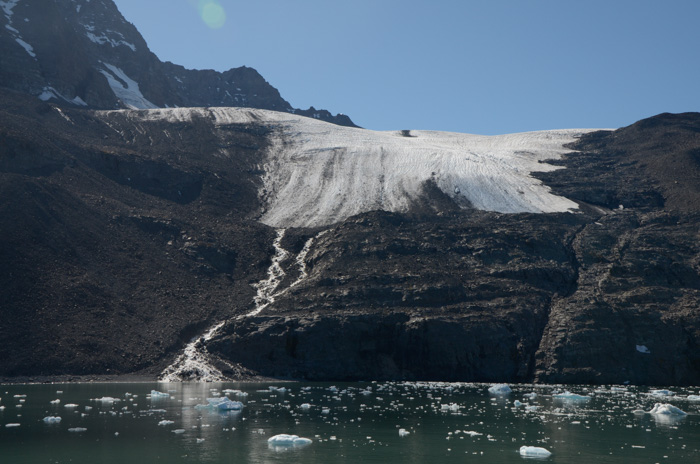 In many places glaciers no longer reach the water. This one is a mere shadow of its former self.

The melting of landbound ice contributes to sea level rise and changes the salinity of seawater, which has a devastating effect on marine life. 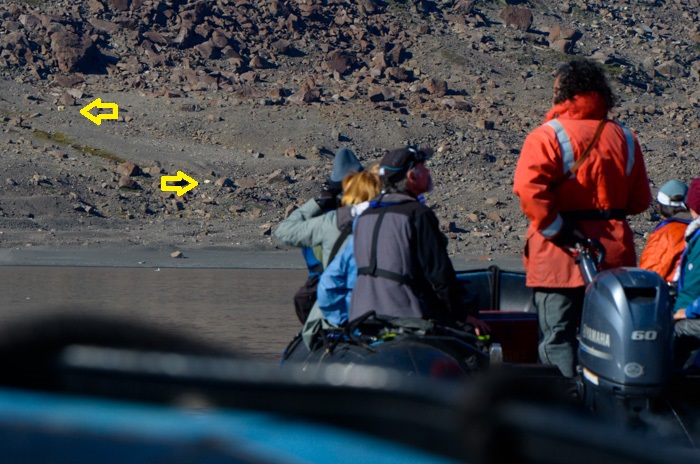 The ship had enough Zodiacs that all of the passengers could be embarked at once for exploration. We didn't have to take turns.

We never got ashore because of numerous polar bear sightings. There are two bears in this picture although they are quite small due to distance and don't look much different from the rocks, only whiter. Arrows indicate their locations. 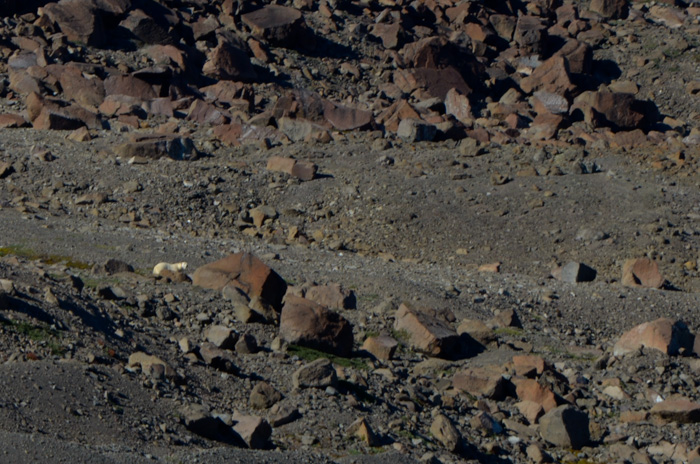 Just to prove that I wasn't lying, this image shows a more recognizable bear to the left of the large reddish boulder.

These were not the only bears hanging out on this rocky beach. There were at least two others that I saw and some folks identified more with their binoculars.

Since they were singles we figured that they were males and there was much speculation what might happen if they ran across each other, but they never did. Although polar bears are solitary animals, males may hang out near each other while waiting for sea ice to return. 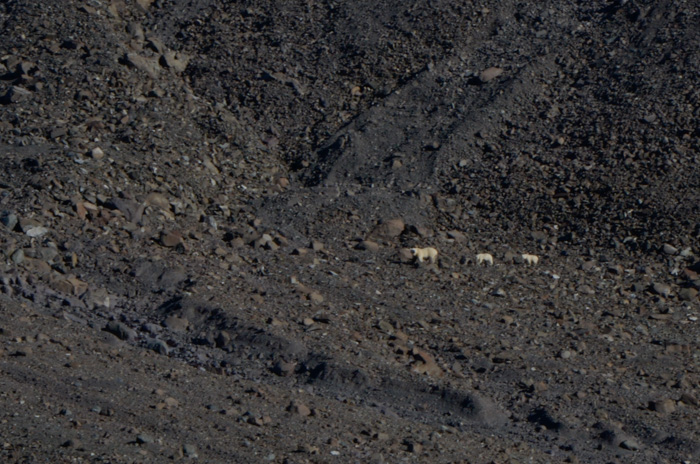 We got a call from the ship that a mama bear and cubs had been spotted on the opposite side of the fjord, so we high-tailed it over there.

We watched these bears for quite a while as they prowled around the rocks. There is nothing for them to eat here, but polar bears have evolved to endure long periods of fasting. Click to find out more about polar bear dining habits and needs. As the sea ice decreases, however, the bears' reproductive success declines.

This mama and cubs did not look thriving. 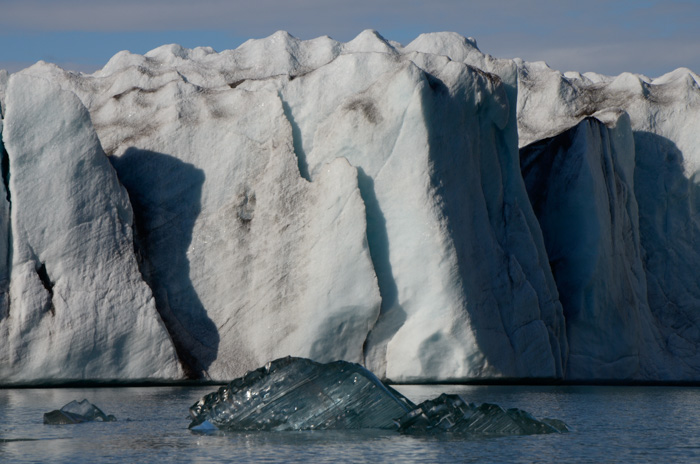 We left the bears to their own devices to explore the face of the largest glacier. It is dangerous to get too close because large segments can calve off at any time. Large glaciers are always moving, albeit slowly, and usually groaning more or less loudly. 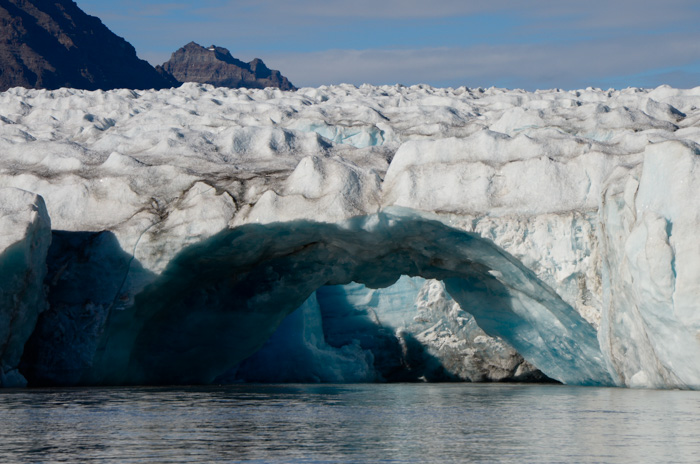 This arch might tempt an unwary boater into danger. It looks enticing, but as we cruised by we heard splashing behind the archway indicating that the glacier was calving.

Our expedition leaders thanked all of us for not being importunate about getting closer to glaciers and bergs and bears. Even smaller bergs could split or turn turtle without warning.

Early in the trip we were "treated" to a video of a boat almost being swamped by a calving glacier. That probably helped to minimize unreasonable "up close & personal" requests! 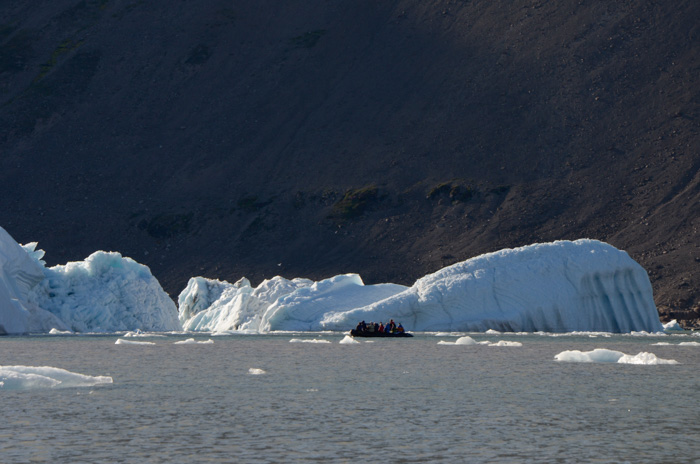 Most of the icebergs dwarfed our Zodiacs. Some were even larger than the ship. 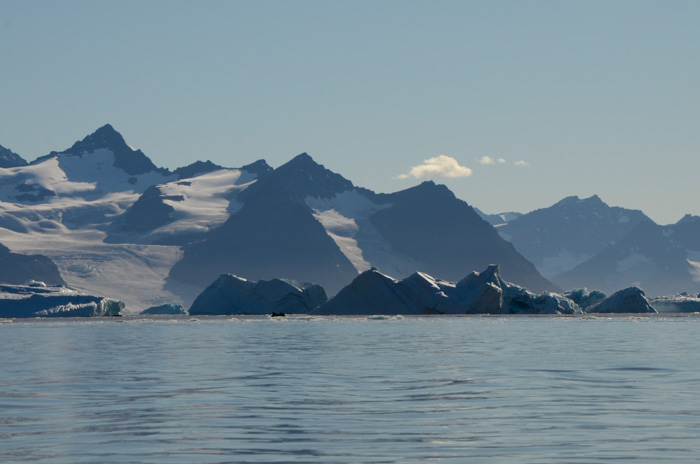 Nansen Fjord was a majestic introduction to Greenland.