Skaergaard Fjord is the second largest on the southeast coast of Greenland. The huge Kangerlussuaq Glacier, the largest glacier on the east coast of Greenland's ice sheet, feeds its waters. The fjord's entrance forms an impressive bay surrounded by towering cliffs and high mountains, such as the 1,600m high Batbjerg. It was our next stop. 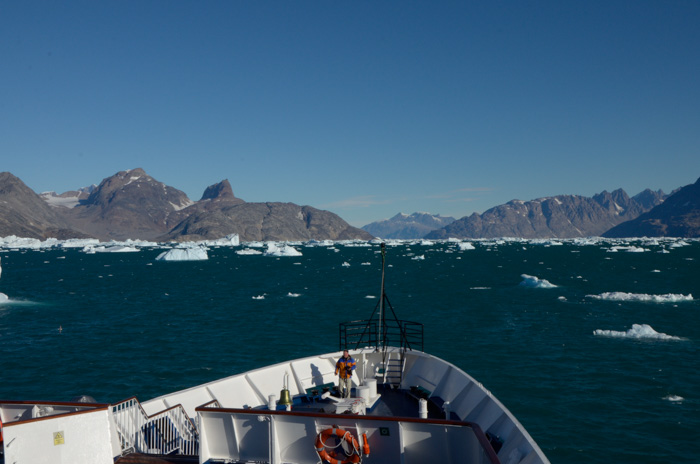 The following day saw us in Skaergaard Fjord, the location of the Skaergaard Intrusion. Our geologist, Tom Sharpe, was beside himself with enthusiasm. He told us to be sure and let our geologist friends back home know that we had been here ... and watch them turn green with envy.

Not being a geologist, I'll let the link above tell about the importance of this formation. I can attest that the location is very beautiful.

The Sea Adventurer is designed for the ice so we had no worries about venturing into ice-filled waters like these. 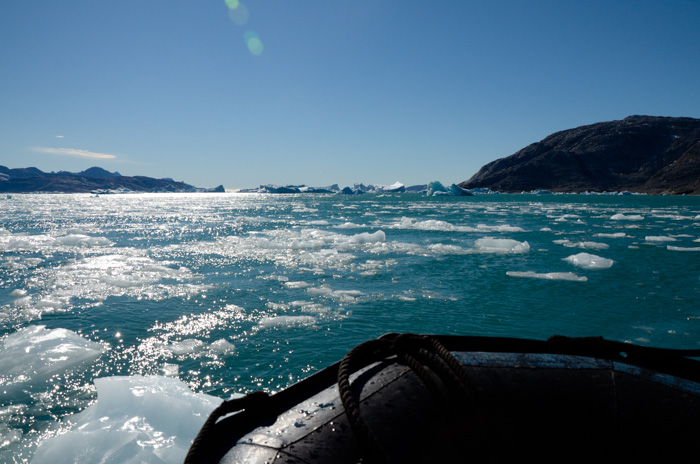 Once we reached our target anchorage, we piled into Zodiacs for a shore excursion. On the way to the landing we cruised among ice. I have a separate page containing some of the unusual and whimsical icebergs that we saw.

I don't usually take up offers to snap my picture at this or that place, but I made an exception here. This is about as bundled up as I could get with the clothes that I brought. It was a hard trip to pack for as we had a wide range of expected conditions: 90s when we left home, 50-60s in Iceland, 30s-70s in Greenland, back to 90s in Canada. Layers!

I think this was our coldest ride. The air temperature wasn't bad, but we were down on the icy water. 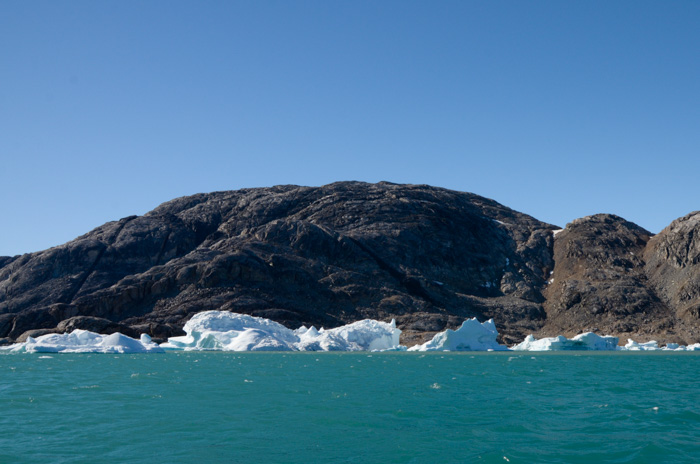 The intrusion can be seen here as the darker rock that has pushed up through the older and lighter colored rock. 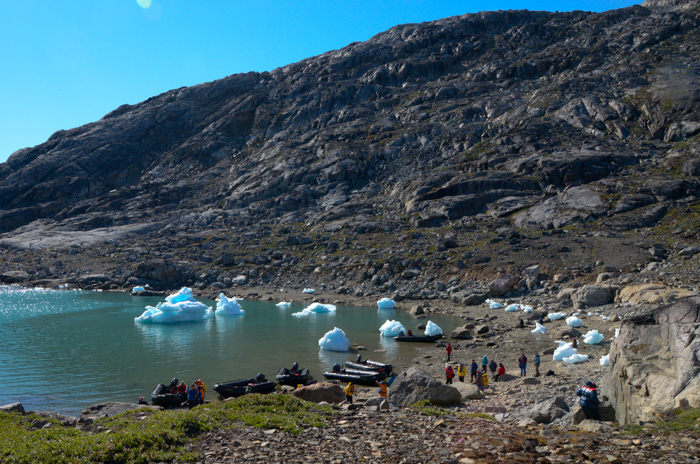 After our ice cruise we landed in this cove for an exploration of the intrusion. I wasn't aware that we wouldn't be taking the same Zodiac back to the ship, so I left my little orange backpack on the Zodiac. That little backpack has sentimental value and quite a few frequent flyer miles over the 30 years I've had it. I was dismayed at the thought that it might be lost! It didn't blow away, however, and it was soon found -- soaking wet from sloshing around in the bottom of the boat.

I never knew the backpack was washable! I rinsed it out well to use for the rest of the trip and after we got home I ran it through the washing machine. It looks better than it has in years! 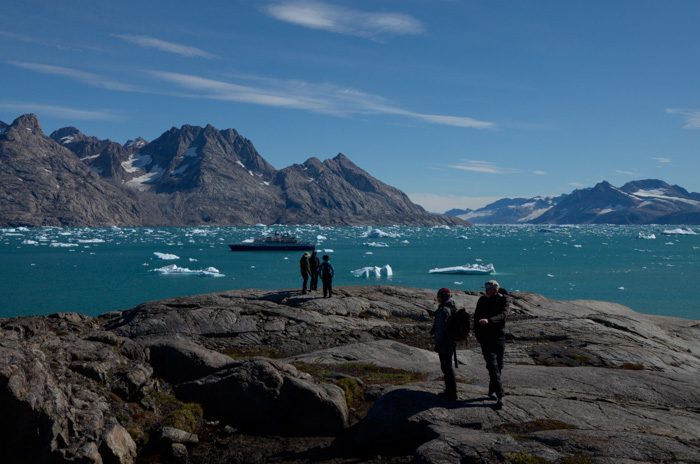 On all of the shore excursions, except those in towns, members of our expedition staff patrolled the area with binoculars and rifles to provide protection from the occasional polar bear! They warned us to keep a staff member in sight at all times and head immediately for the Zodiacs if directed. If bears were visible prior to landing, the landing was abandoned. I believe the rifles were loaded with one blank to scare the bear away, but the rest of the ammo was live. I'm happy to say they were never needed.

As I recall we are standing here on the crest of the darker rock shown above.

The remains of an abandoned cabin overlooked the cove where the Zodiacs landed. I don't recall whether the cabin had once housed a fisherman, hunter or geologist!

In addition to the wood scattered about, there were the rusted remains of a cooking stove.

The concrete foundation block was dated 1982.

There were some interesting plants to be seen. I've created a separate page for Skaergaard flora.

Here is where my memory gets as hazy as this scenery. When I produced this narrative, I found a large set of images from the same day as above. For some unknown reason I had not processed them while still on the ship.

Memory research has shown the benefits of rehearsal on retention of information. That set of images had not been reviewed (or "rehearsed") from the time they were taken until almost one month later. This has severely impacted my ability to recall details about them.

Judging from the sequence of pictures, we returned to the ship and proceeded somewhere else in or near the Skaergaard Fjord. Obviously we ran into fog along the way. This picture was taken over two hours after the one above.

The fog cleared and we made another landing in an area with strikingly different rocks than the ones we had seen earlier. The time of this picture is another two hours after the one above.

I found a reference online with maps that make me think that this is in fact another part of the intrusion and that we are not far away from our original landing. The amount of time it took between one landing and the other would be due to slow and careful progress through the fog and ice.

Aargh! Next time I WILL take notes (and won't manage to delete them all). 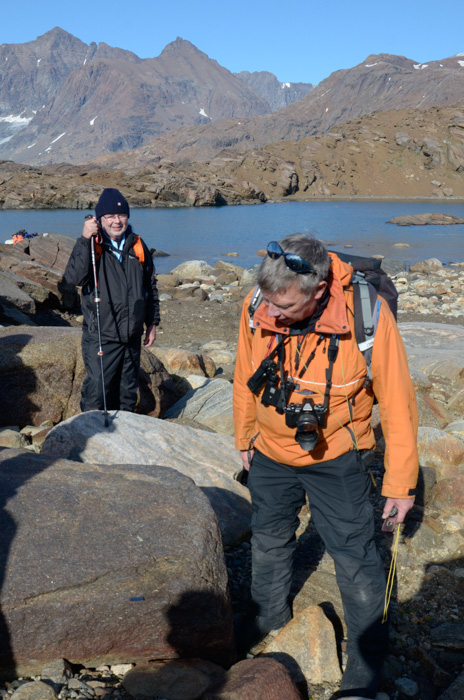 Tom describes the magnetic qualities of this particular rock. The little blue mark on the rock is part of one of our magnetic nametags, which has stuck fast. 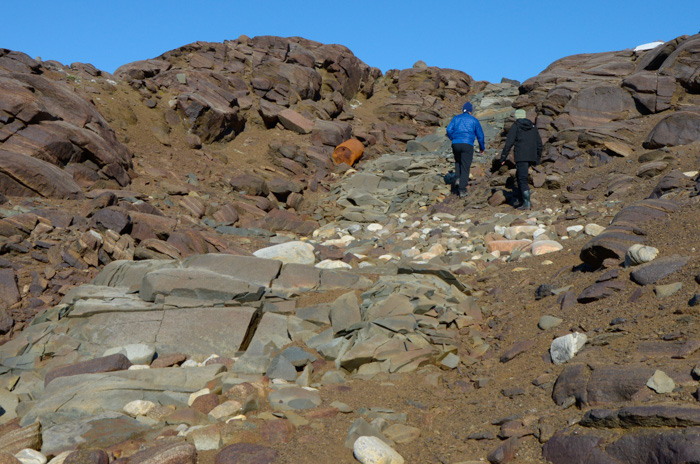 The plan was to go on a longish hike to find another abandoned cabin. First we scrambled up this dike of fractured stone. It was very brittle and had broken into sharp pieces. Falling on the sharp edges would have been VERY unpleasant. It was slow going.

The rusted oil drum is an indication that humans have been in the neighborhood. 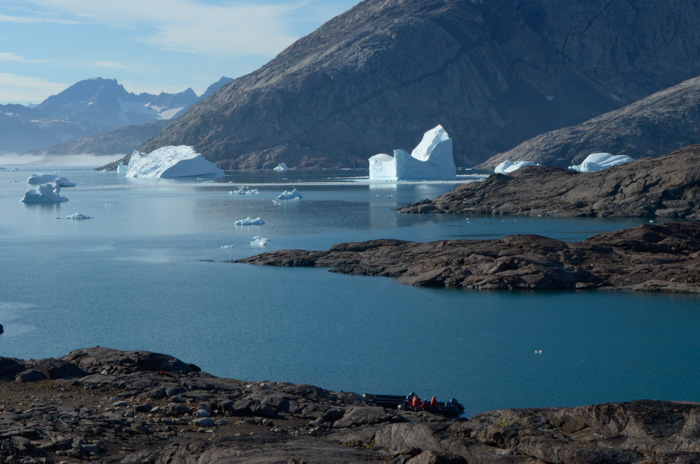 As we started on our climb, I was fascinated by the throne-shaped iceberg. This particular iceberg features heavily in the very excellent video compiled by Rob Dunbar, our Stanford professor, from his drone flights. It has a small meltwater pond in the center. The video identifies the footage as being from the "Skaergaard Cummulate," which reinforces my guess that this is really another part of the intrusion that we reached by cruising down one arm of the fjord and up another.

From the top we got a great view of the ship and surrounding area.

Unfortunately we ran out of time for our promised hike, so we scrambled back down the treacherous dike for a Zodiac ride to a delayed dinner.

I don't think I've ever appreciated my hiking poles more than on this day.