The expected attraction here was an area of geological wonders in Ikka Fjord. (Check out a breathtaking underwater video.) We needed a local guide to visit the site and had a prearranged meeting place and time.

Our weather luck is running out. We had been blessed with sunny skies and mild temperatures throughout the trip, but this day dawned grey and dank. Soon it began to drizzle. Undaunted, a hearty group disembarked into the Zodiacs for our expedition.

While waiting for our guide we watched a muskox or three hanging out on the hills, but soon our guide appeared.

We were enjoined to follow the guide boat in an evenly spaced line to avoid inadvertently damaging the underwater marvels we were to visit. We were also informed that this was a "no wake" zone, so our pace was stately. 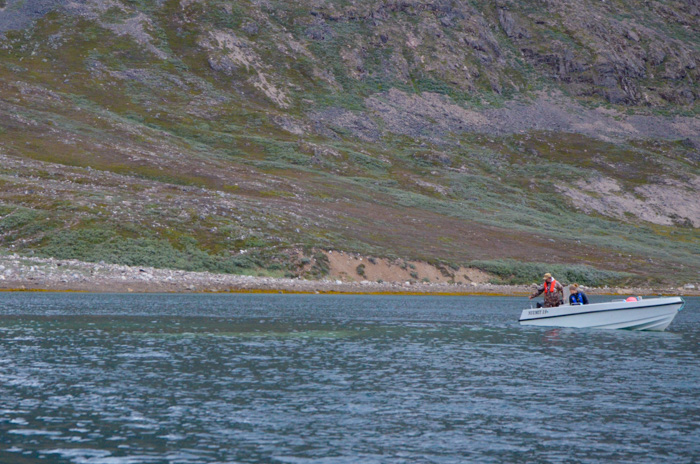 The spot. It doesn't look like much in this photo, but you can see the area of relatively calmer water with a lighter color. 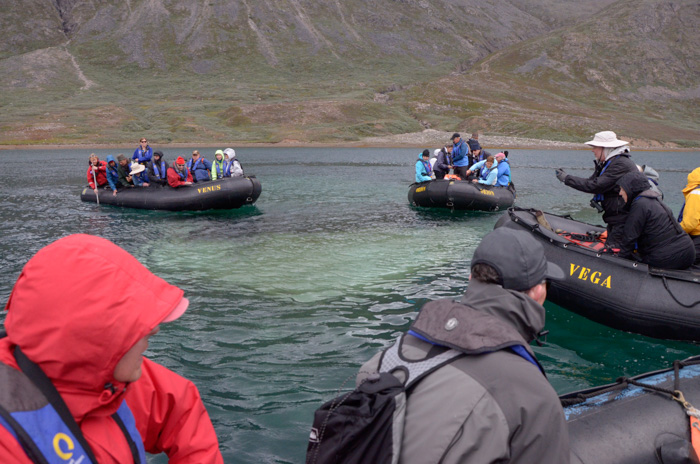 Zodiacs cluster around the column that the guide indicated above.

The material making up these columns is known as ikaite (ICK-a-ite) for this specific location. It can only exist in water. Once removed from its environment it decomposes. 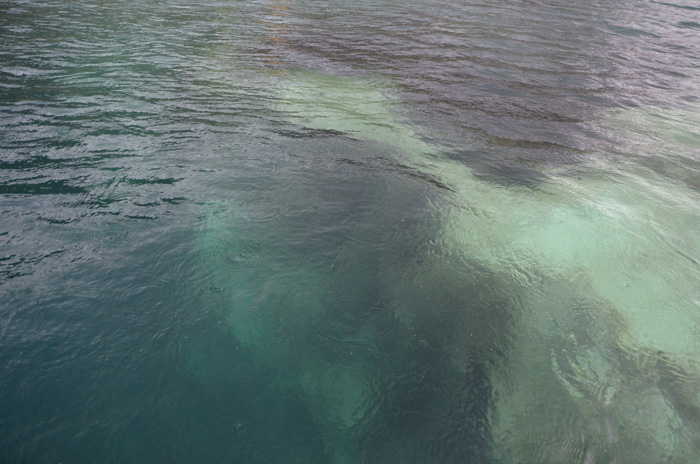 It would have been nice to have a polarized lens or an underwater camera, which some of our group did have.

The collections were very diverse and some had fanciful names like "Manhattan," presumably because of its resemblance to the skyline of New York City.

The height of the columns is limited by the low tide level.

That wasn't our only goal so eventually we left the eerie columns to proceed to the head of the fjord. We expected another landing for exploration.

But first we saw this small family of muskoxen. They are native to northern Greenland, but were introduced into southern Greenland in the 20th century.

Not far away we saw a larger group of animals hanging out by a low waterfall. 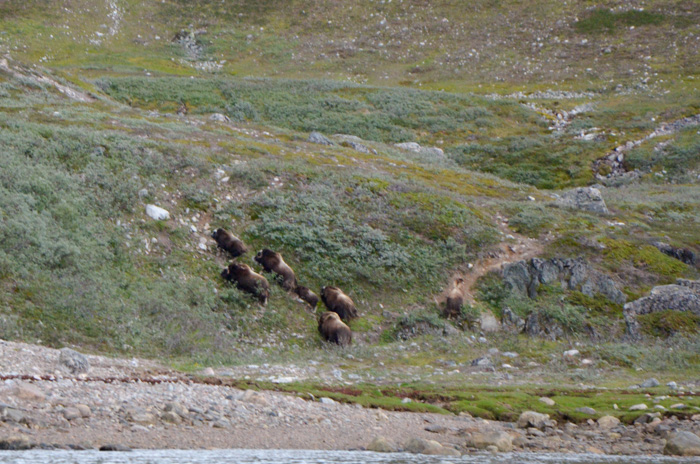 We stayed for quite a while watching the critters. They were equally curious about us until something startled them and they decamped en masse.

There were muskox herds on the other side of the fjord as well, so our shore landing was scratched and we proceeded back to the ship at a pace that was respectful of the underwater columns.

Following this excursion we had an entire day and night to reach Nuuk, the capital of Greenland and our next-to-last stop. It was clear that our excursion was drawing to an end by the "last call" notices: last call for laundry service, last call to settle shipboard accounts, etc.

The afternoon entertainment included watching the early documentary Nanook of the North. I had heard of this all my life, but never seen it. It was a product of its era, but informative nonetheless.