The Prince Christian Sound connects the Irminger Sea on the east of Greenland with the Labrador Sea on the west. It is around 60 miles long and narrow. Steep mountains surround the long fjord system and strong tidal currents limit the formation of ice. 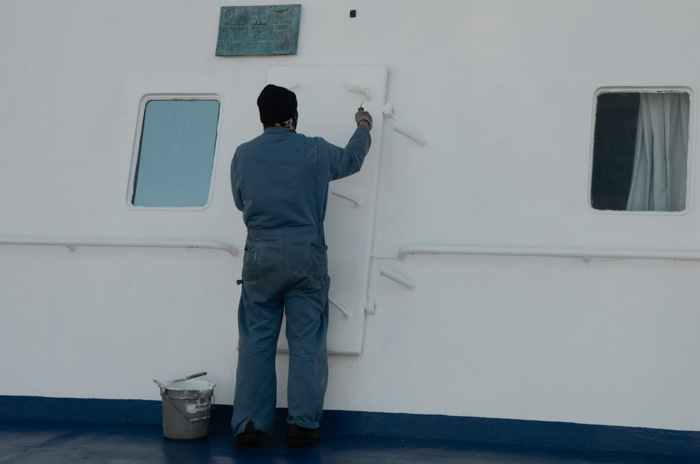 Before we get to the scenery, I must acknowledge the dedication of the crew of our vessel. Every day there was maintenance to be done or safety drills for the staff. This doesn't include the behind-the-scenes actions that weren't visible to us even though we benefited from them.

Thank you to all the staff of the Sea Adventurer for a fun and safe cruise! 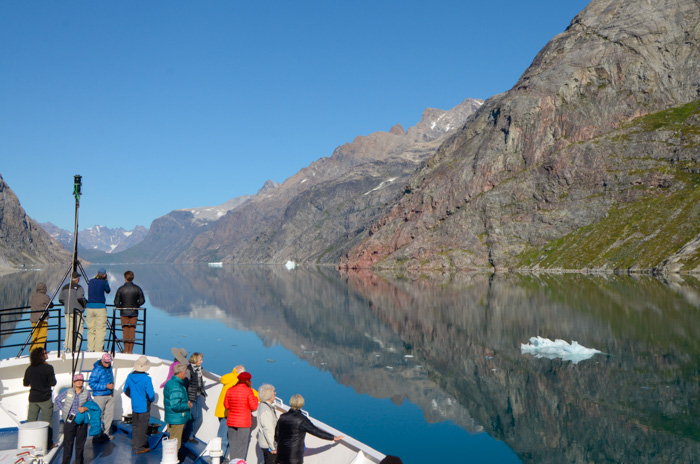 Much of our time in this fjord was spent on deck watching the scenery go by. As on the day before, the still water made great reflections. 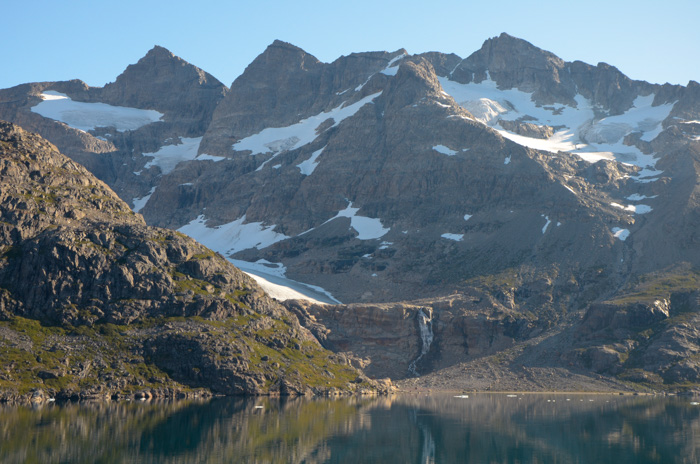 Waterfalls from melting glaciers were everywhere. 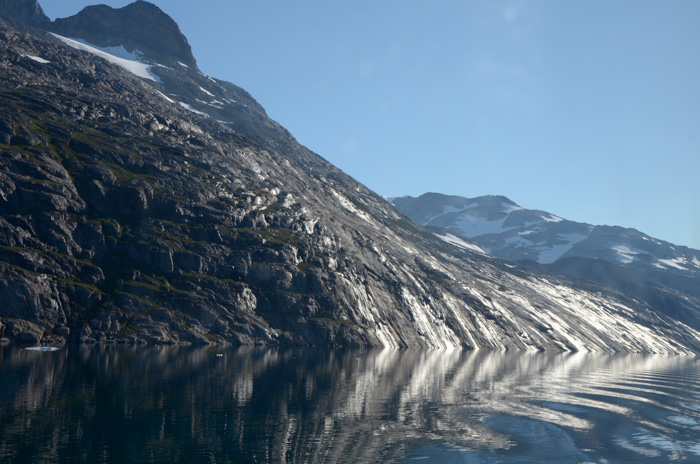 The only thing disturbing the reflections was our own wake.

I'm not sure if there is a "speed limit" in these fjords, but our ship moved at a stately pace to allow us to see what there was to see (and to look out for critters). 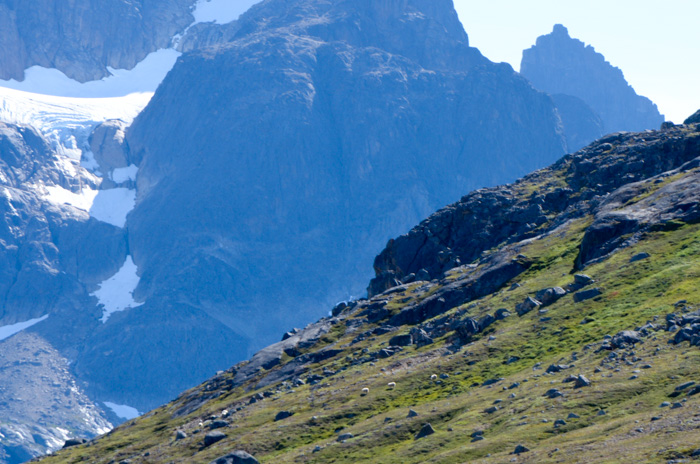 Partway through the passage, we cruised Kangerluk Fjord to land and explore. One of the sharp-eyed staff spotted white critters grouped around the potential landing spot and thought we had encountered yet more polar bears! You can see three of them towards the bottom of the image.

No bears -- polar sheep! They took one look at us and scampered away over the ridge. 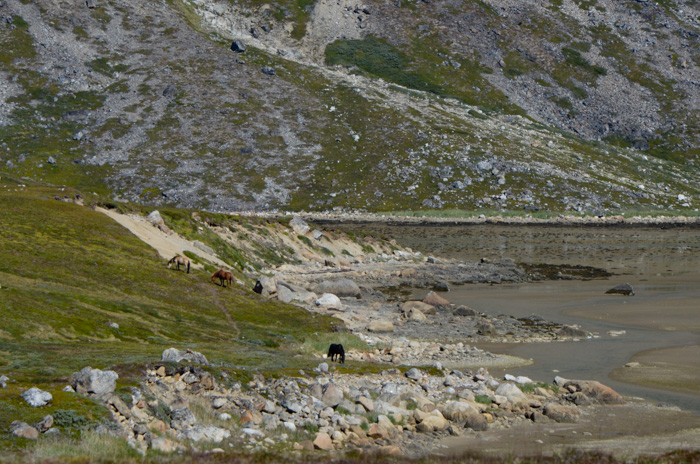 Also in the vicinity were polar horses.

We are near the small settlement of Aappilattoq, which supplied the livestock. 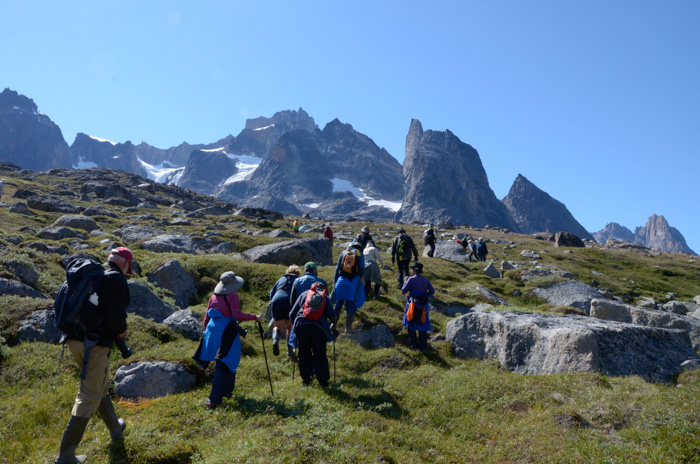 Long walkers scramble through boulders to see what's on the other side.

The terrain was treacherous and one of the hikers had a nasty fall. 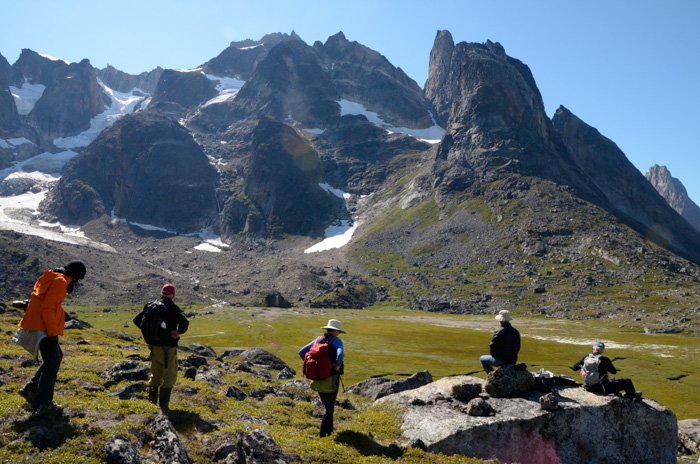 Even though our leader and rifle-bearing protector returned to the injured hiker, the rest of us continued to this overlook.

The meadow looks like a silted up former lake bed with a stream meandering through.

We were all glad for a rest, even with the accompanying black flies.

This was one of the places where Rob Dunbar launched his drone to capture images of places that we couldn't reach.

More than one of our number has returned home with drone envy, and I predict that there will be at least one or two camera drones under the Christmas tree this year.

I can't imagine the deft touch and three dimensional mental capability need to operate one of these beauties properly. Given the hostility toward drones here in Virginia, it might even become impossible to practice. I don't know if other localities are also as suspicious. 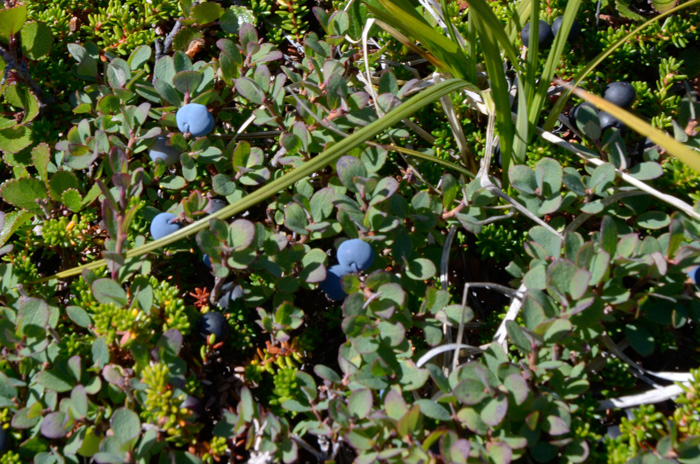 There were plentiful blueberries to sample on the way back to the ship. 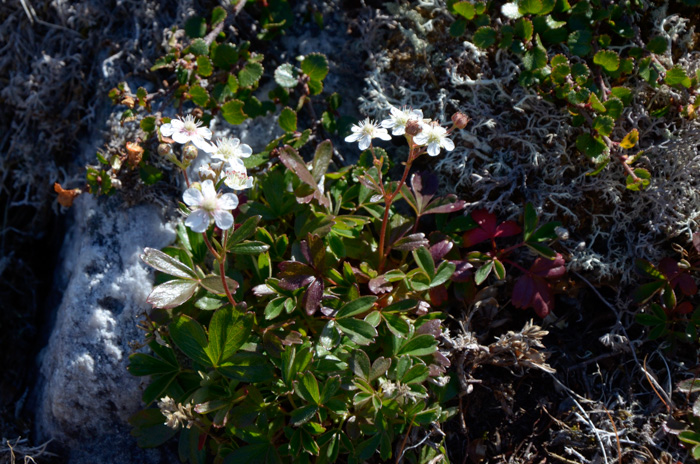 And some shrubby five-fingers. According to the information at the link, these grow wild in Virginia, but require acidic gravelly and well-drained soils, which we don't have at our house. Pity. 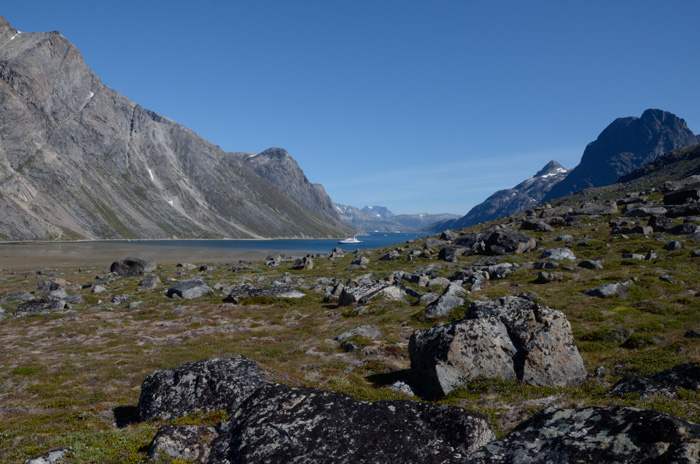 We continued through Prins Christian Sund to the western side of Greenland. From now on we will be seeing more settlements.