After my horseback excursion, I returned to the hotel to find the troops gathering. Jim & I joined them at happy hour and dinner and met our expedition staff and fellow travelers. There was even a couple we knew from a previous trip to northern Russia. We clearly have a common interest in the Arctic! The next morning we packed, left our suitcases to be taken to the ship, and loaded onto one of three buses for our "Golden Circle" tour. 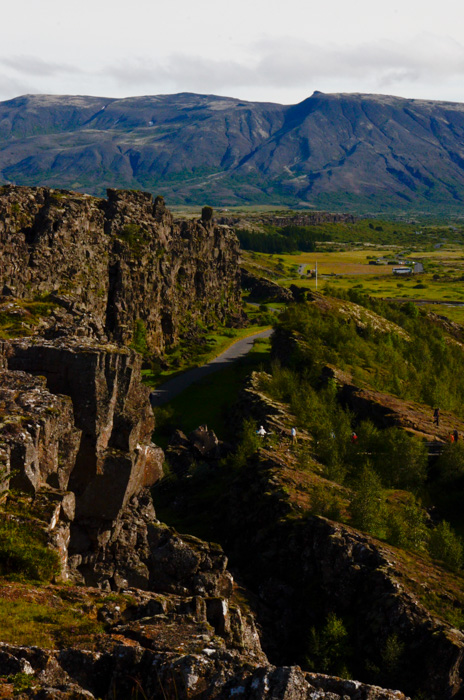 Þingvellir (Thingvellir) is the site of the ancient Icelandic "parliament" --  the first representative government in Europe. The Alþingi (Althing) was inaugurated in the 10th century and ruled until the 14th century when Iceland came under the control of Norway. After that time it served as the judiciary until 1798.

This rift valley was perfect for gathering the clans to review the laws, settle disputes, make decisions, and generally hob-nob. There was ample space for people to congregate, fresh water from the nearby lake, grazing for livestock, and firewood. 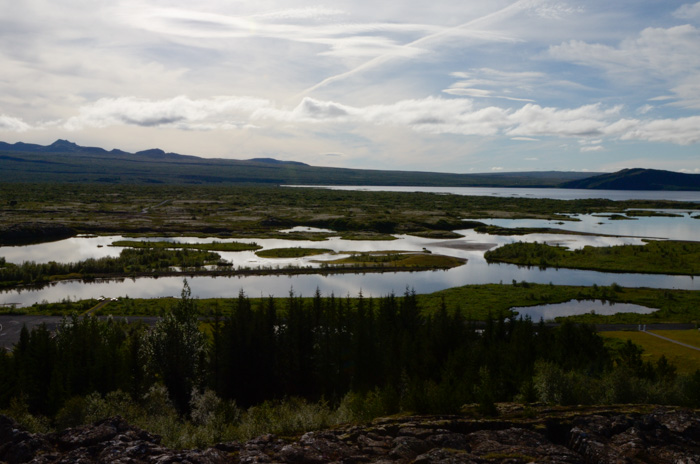 The nearby lake, Þingvallavatn, is the largest natural lake in Iceland.

The water channels shown here formed after subsidence of the land over the centuries. It is believed to be twelve feet lower than at the time of the first assembly in 930. 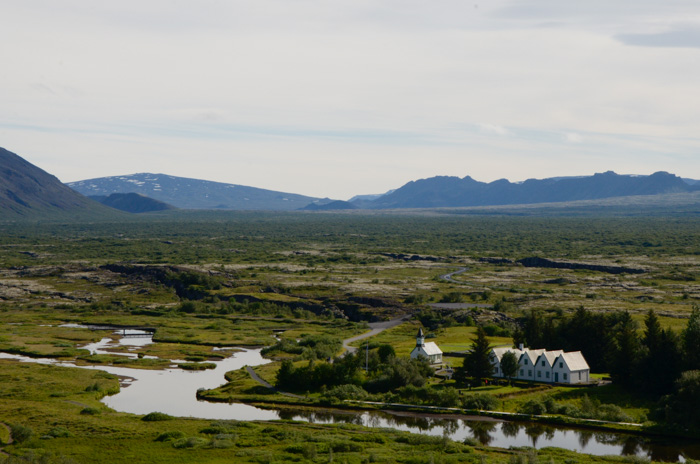 At the Alþingi in 1000 the Icelandic leaders decided to abandon the old Norse religion and convert to Christianity. The chieftain delegated to consider the matter and decide was himself pagan.

The original church at this location was built shortly after that decision using wood donated by the King of Norway. The current building was constructed in 1859. The building adjacent to it was built in 1930 to celebrate the millennium of the Alþingi. 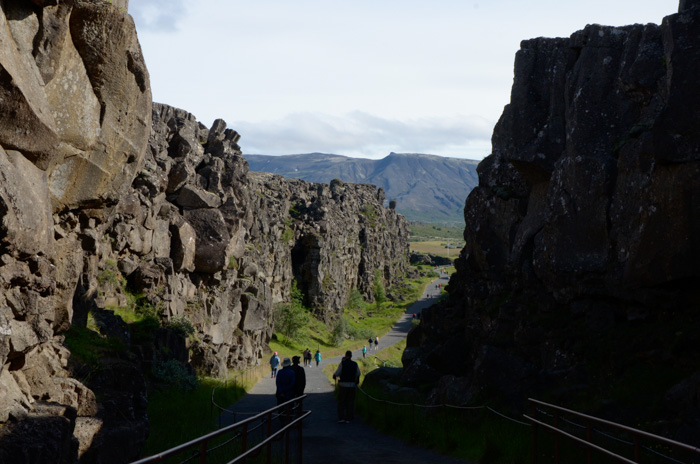 The path to the location of the Þingvellir follows a fissure that has enlarged since 2011. There was once a gravel pathway into the valley, but it was destroyed by the spreading of the earth. The current walkway is wooden and raised above what is now a deeper canyon.

The flat rock face towering over the path on the left was the location of the Alþingi debates. The configuration of the rocks makes for wonderful acoustics. Our guide recited a selection from the sagas to illustrate how easy it is to be heard. 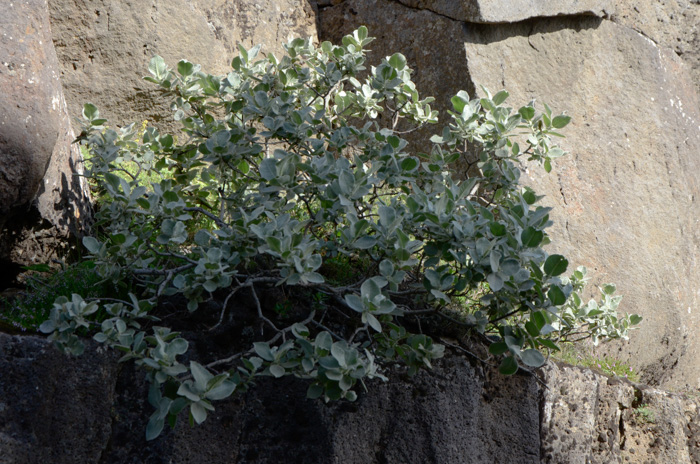 On the way down we were introduced to the two native Icelandic trees. The willow never grows much bigger than this, which is about two feet tall. We waded through similar willow "forests" in our visit to Greenland. 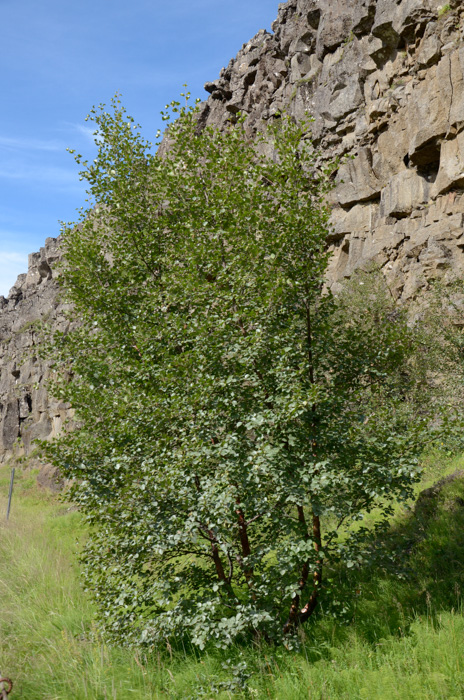 The other native tree is the birch. It grows this large only in a protected place.

Fierce winds, cold, and the short growing season combine to stunt the trees. 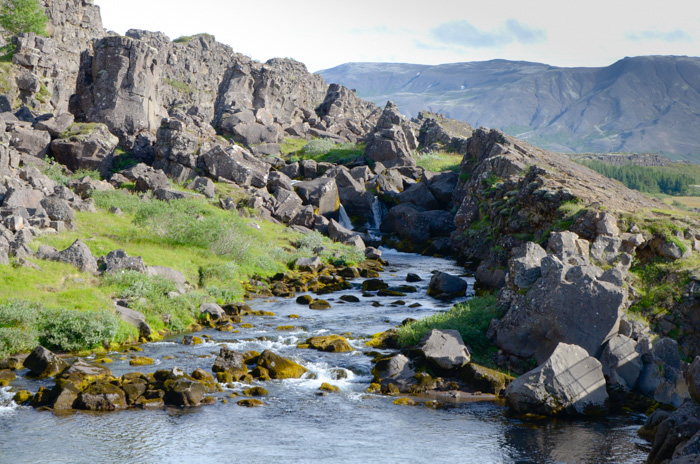 The pool associated with this waterfall was used in criminal justice cases. Someone found guilty of a minor crime may have to pay a fine. A more serious offence resulted in exile, either for a specified time or permanently. Capital punishment was rare, but beginning in the 13th century, it was administered by drowning in this pond or elsewhere.

An exiled individual had a specified amount of time to leave the island. If he exceeded his allotment, he became an outlaw and could be killed by any citizen. 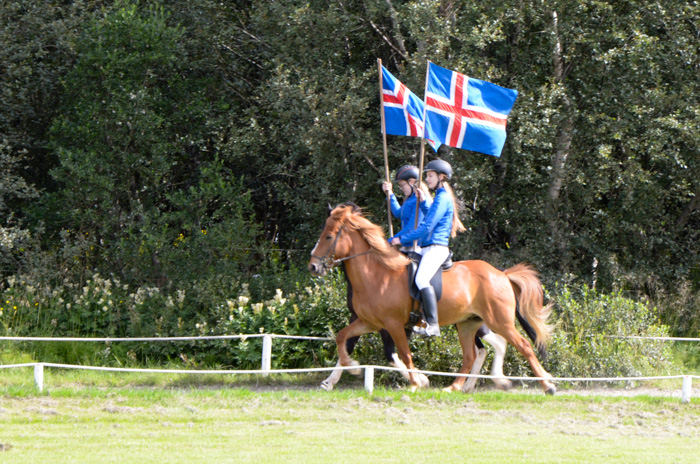 After visiting Þingvellir, I got another horsy fix at Fridheimar where we enjoyed an equestrian demonstration and lunch. Iceland is my kind of place: 300,000 inhabitants and 100,000 horses! The horses have been isolated for over 1000 years as have the local sheep and cattle. No livestock may be imported and any animals that leave the country may not return.

This color guard presented the Icelandic flag. The modern version of the flag is red, white & blue as shown here. An older version lacks the red cross. Both versions are accepted.

These horses are performing the tölt -- a lateral gait with two feet on the ground at all times. 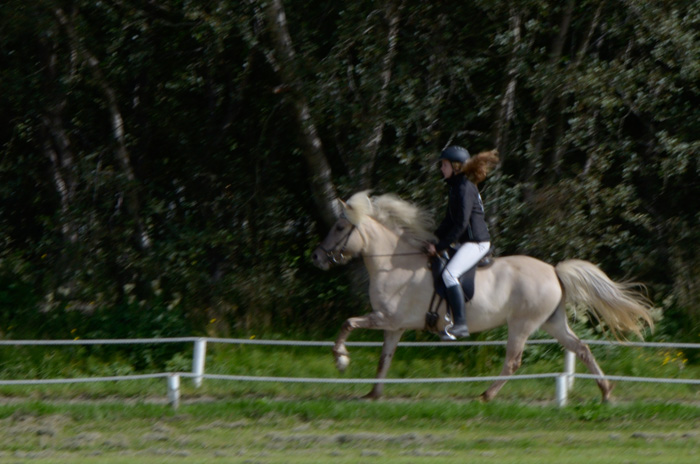 This horse is cantering. At this point of the stride there are two feet on the ground, but usually there is only one. There is also a time of suspension in the stride in which no feet are on the ground. This makes the canter a bounding gait. See how both the horse's mane and tail float as well at the rider's hair.

The gallop is simply a faster canter. 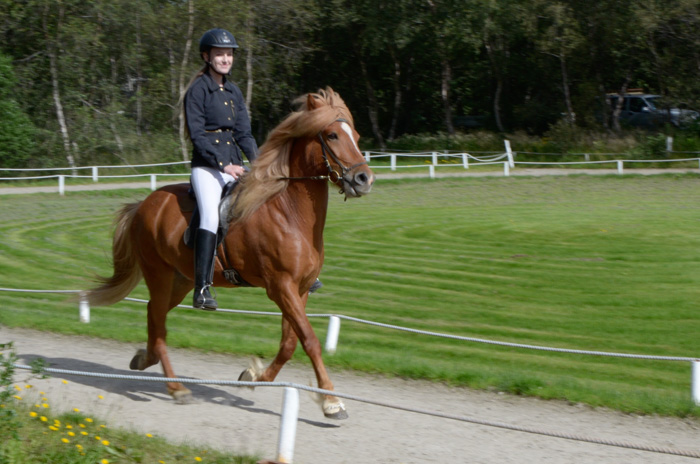 This is the flying pace, a gait that covers as much ground as the canter. In this picture you can see how there is one foot on the ground. It is the lack of suspension that makes the gait so smooth.

The abundant mane is one of the distinctive and attractive characteristics of the Icelandic breed. 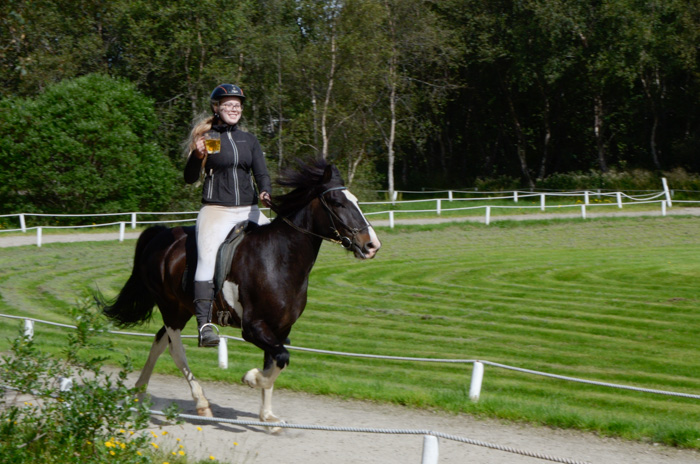 The demonstrators carried filled beer mugs as the horses showed off their gaits. This horse must not have been quite as smooth as the chestnut because a bit of the beer did get spilled. 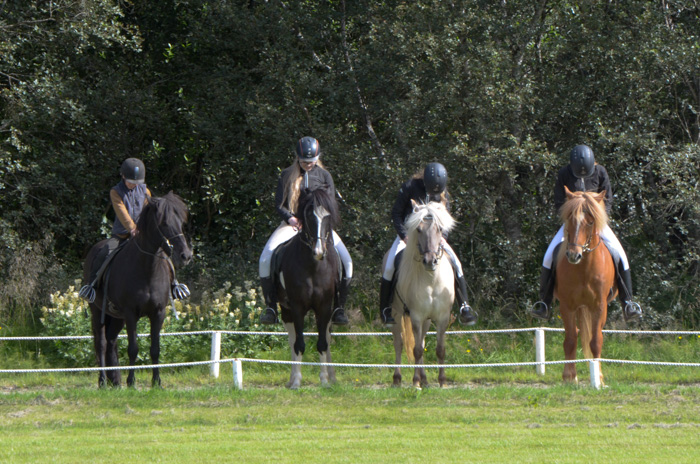 The demonstrators taking their final bow. As we migrated to the greenhouse for lunch the young girl on the left stood atop her horse wishing everyone a good meal. The horse never moved a muscle. 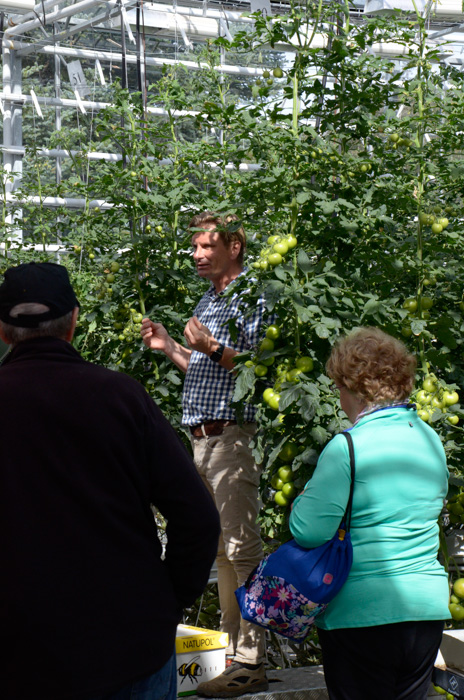 This family has more than its share of entrepreneur genes. In addition to the horse demonstration and dinners, they also have a huge tomato greenhouse. The vines grow up to nine feet on supporting wires and produce all year round. In the dark months lights keep the plants happy. I forget how many tons of fruit they sell.

Since the plants are in an enclosed space, they have imported bumblebees to pollinate them.

We were not surprised that the luncheon featured tomatoes in many different guises -- including tomato jam. Nothing was better than my Cherokee Purples, though!