Sometimes thinking ahead isn't enough. I had neglected to study the web site of the horseback company well enough to understand the restrictions on horsy gear in Iceland. The equine population of the island has been isolated for centuries and the horses have no immunity to diseases that are common elsewhere. They do not want people showing up with riding gear that could carry germs.

Since I wasn't aware of that, I had brought my own riding gear with me. I (finally) reviewed their web site before leaving the hotel and saw that I couldn't use my helmet, which we discarded at the hotel as I had already retired it from service. I put away my gloves, but was able to use my riding breeches because they had been well washed.

I awaited the pick-up at the hotel with only a little impatience. I was the last pickup for my bus so it didn't arrive until a half-hour after the scheduled time, which really stoked my anxiety level.

While I was out horsing around, Jim went on an expedition of his own to locate additional plug adapters for all of our chargers. We also needed one that would accept a US three-prong plug to enable me to use my computer. His search took almost three hours and he got to see quite a bit of Reykjavik.

The name of the provider that Zegrahm recommended was Ishestar (dunno how to pronounce it) and I selected their all-day "Viking Tour." The name means Iceland (IS) horse (hestar). There were numerous animals saddled and ready to go.

The staff first matched up beginners (fewer than one-dozen horseback rides) with horses. One woman near me worried what to do because she had ridden as a youngster, but hadn't been on a horse in many years. I suggested that the "beginner" horses were likely to be quieter, so she decided to go that route. I hope she was happy with her decision. Another woman from Germany was happy to be a beginner. She only rides when traveling like this. About fifty inexperienced riders formed into two groups.

After all the beginners were matched up, the advanced riders received their mounts. There were only about eight of us, and I was happy to note that everyone was in fact a capable rider. 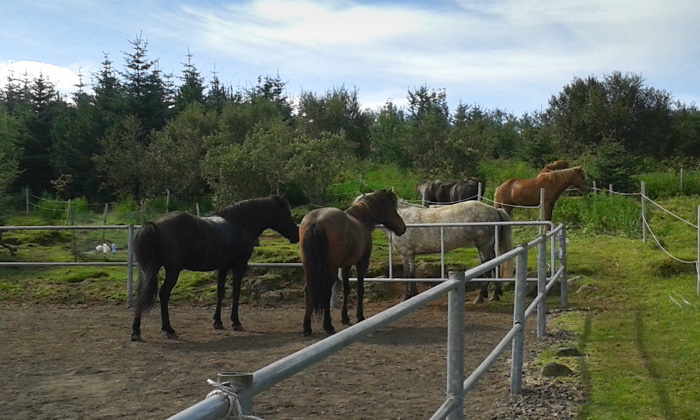 I didn't get a chance to take a picture of my morning mount before or during the ride, but she is the bay on the right. I couldn't pronounce her Icelandic name so I nicknamed her "Sweet Pea." She was a honey to be sure.

The experienced group covered a lot more ground than the beginners and put the horses through their basic gaits: walk, trot, tölt, gallop, and flying pace. The link has videos including a slow-mo section of each. I learned that you must cue the horse properly to get it to tölt rather than trot.

At one point the leader called for a gallop, but Sweet Pea extended into the flying pace. She was flying indeed and easily kept up with her galloping comrades. Wowzers! 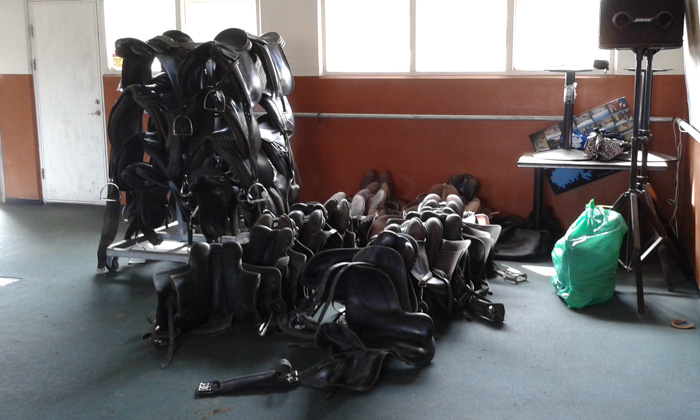 After all the groups returned to the stable, the staff unsaddled the horses and organized the equipment for the afternoon session. Most people only rode one-half day, but those on the "Viking" plan lunched between their morning and afternoon rides. 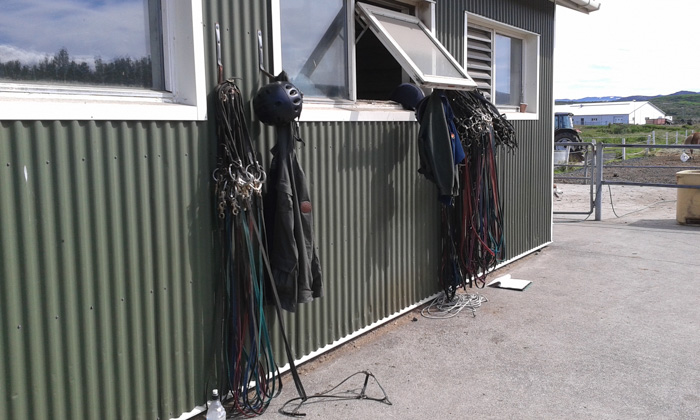 I asked how many horses the stable maintained and learned it was over 100. Each horse is used for half a day plus they get a day off each week. All the animals looked well-cared-for. They were also well conditioned. Even though the advanced group moved out briskly and covered a lot of ground, none of the horses were stressed or reluctant. 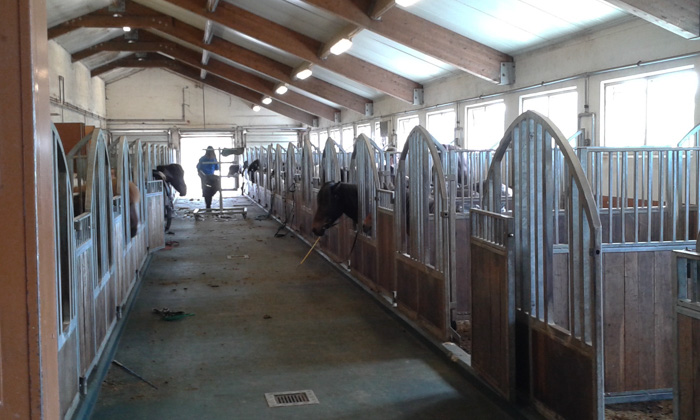 In the afternoon, staff tacked up the horses for the advanced riders in the stable. Some of the stalls had two horses in them, but everyone got along just fine.

Icelandic horses are small in stature -- less than fourteen hands (56") -- but they are called horses rather than ponies. They are sure-footed and sturdy mounts. The floor of the stalls sits several inches below the aisle so the horses here look even smaller.

Several people have asked and my research has determined that ponies and horses are no more different animals than a Dachshund is a different animal than a Great Dane -- they are both dogs. Size is the primary distinction although there are other breed characteristics. Some small breeds, such as Arabians and Icelandics, are called horses. Some "ponies," notably polo ponies, are actually horse-sized. 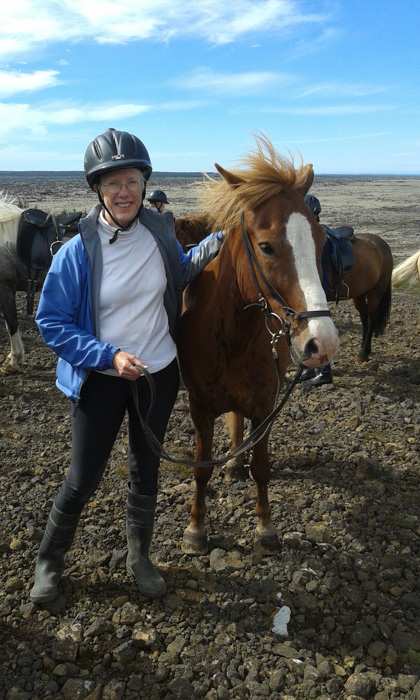 At one point during the afternoon ride, we dismounted and led our horses up a steep hill for a panoramic view. I couldn't pronounce my afternoon horse's name either, so I called him "Surfer Dude." He was just as willing and easy to ride as Sweet Pea although he didn't slip into that fast pace. When the other horses galloped, he galloped.

Icelandic horses come in every color. They also come in tobiano patterns, but I didn't see any overo or appaloosa type markings.

As we led the horses back down the steep and rocky hill, I stepped on a stone, twisted my ankle, and fell! Surfer Dude was the perfect gentleman and waited patiently while I scrambled to my feet. I'm much more balanced on a horse than I am on the ground. 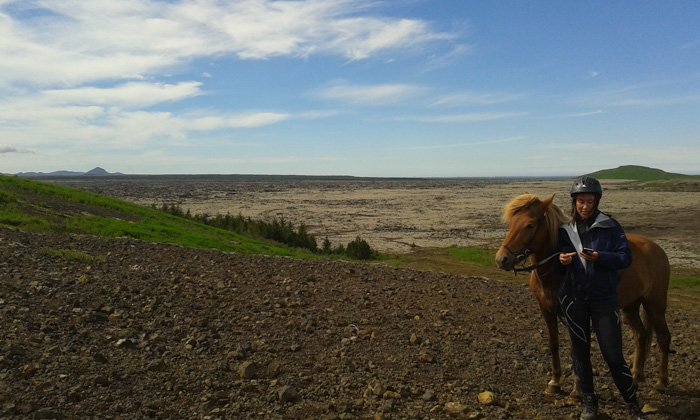 We rode most of the time along the lava field shown in the background. It is a relatively new deposit and the only vegetation that has colonized it is the light-colored moss or lichen. 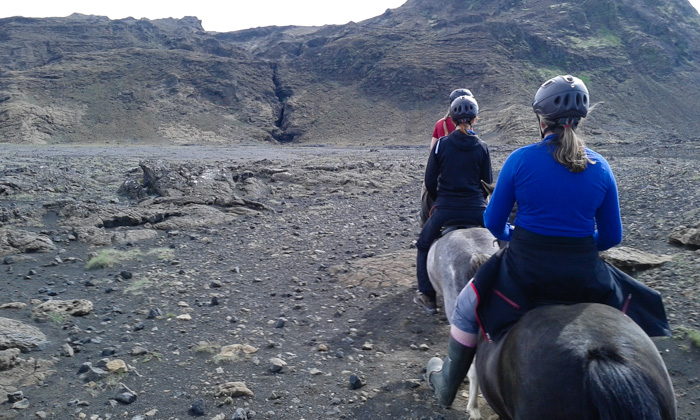 For our afternoon ride we circled the volcano shown in front of us.

We are in an area where two continental plates, the North American and Eurasian, are pulling apart. Iceland is located smack-dab on the spreading mid-Atlantic ridge, and fissures such as this one are common. 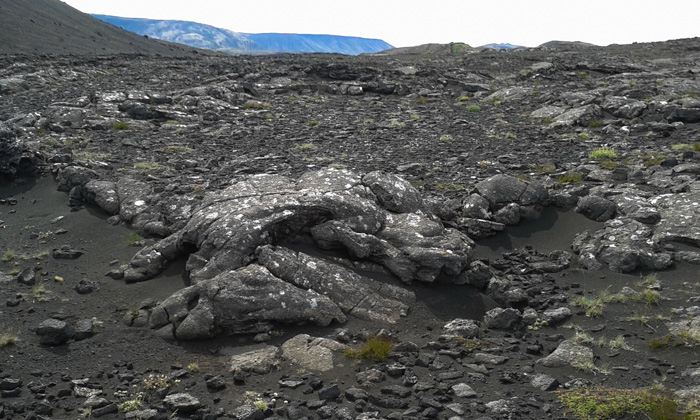 Lava in this area wasn't ejected in explosive eruptions. It oozed out of the earth and made these bubble-like structures. Some were hollow.

There was no incentive to stray from the path here!

Not far beyond this location we passed an area that had been visited by an anonymous artist. This individual carved faces into random boulders. We saw four of these, some quite abstract, some more representational. Given that many Icelanders believe in elves or "hidden folk" who live in rocks, I wonder if the unknown artist was attempting to represent them. I wonder if s/he asked their permission first! 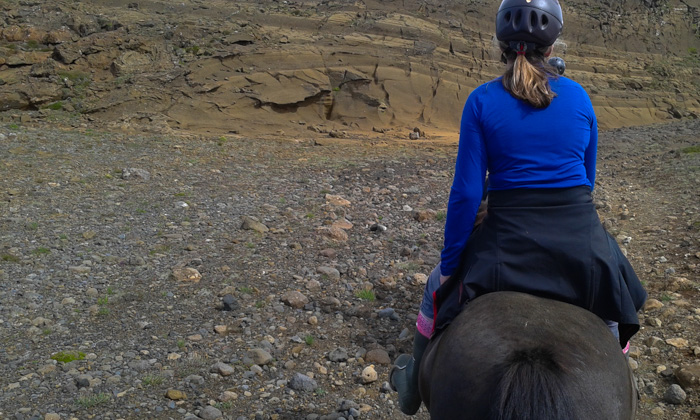 The tan-colored rock, which we only saw here, puzzled me. It doesn't look like lava and it also doesn't appear sedimentary. Our geologist on the tour looked at this picture and believes it is composed of ash layers from a series of eruptions. 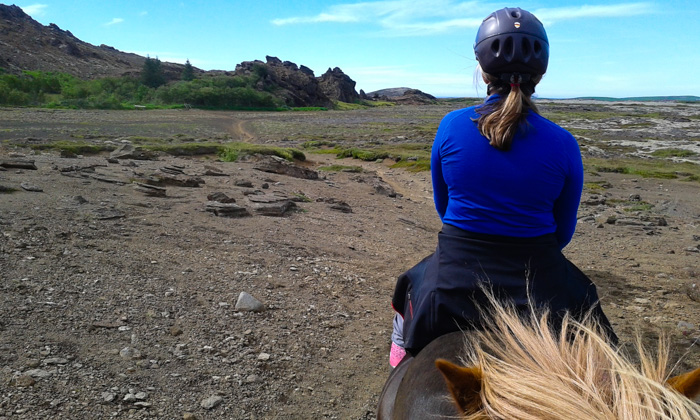 In the back of the volcano, we had a rest stop for riders and horses in the green area ahead.

All of the horses stood quietly at the hitching post while the riders explored the little park. Most of us unsaddled our mounts. This gave them even more rest, but the saddles were very much alike. When I returned, I discovered that someone had inadvertently swapped saddles. The new saddle fitted Surfer Dude fine, but the rider's legs were considerably shorter than mine plus her stirrups were quite uneven. I had to let down the stirrups two holes on one side and FOUR on the other! It was hard to imagine that an experienced rider would not have noticed such a discrepancy.

I'm sure her horse appreciated having an even payload for the rest of the afternoon. That much imbalance would have resulted in a sore back.

The little park was an oasis of green in the lava field. Someone must have planted the evergreen tree because they are not native. 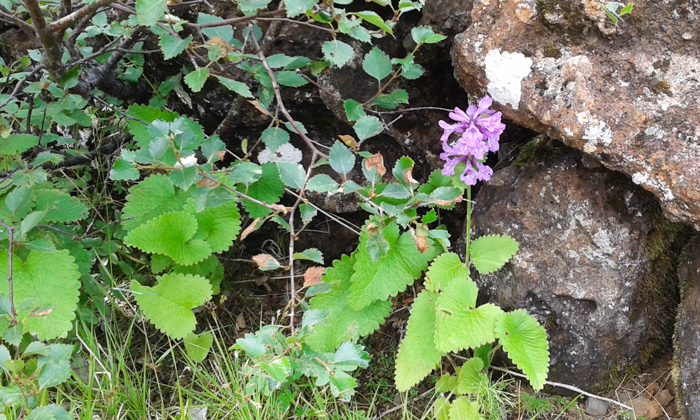 Wild flowers were tucked into sheltered places among the rocks. 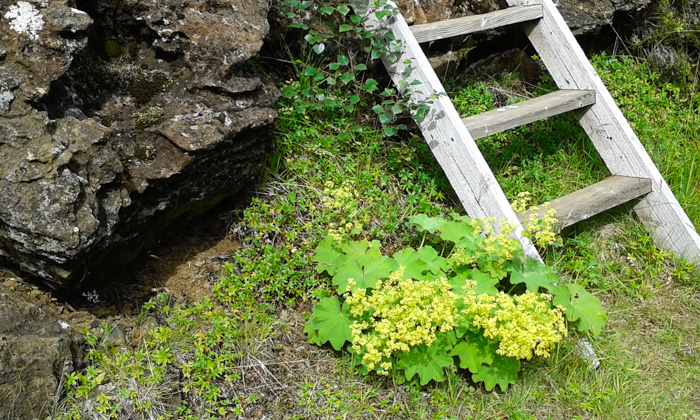 Strategically located short ladders made it easier to climb from one level to the other.

There were also a couple of caves located in the park. 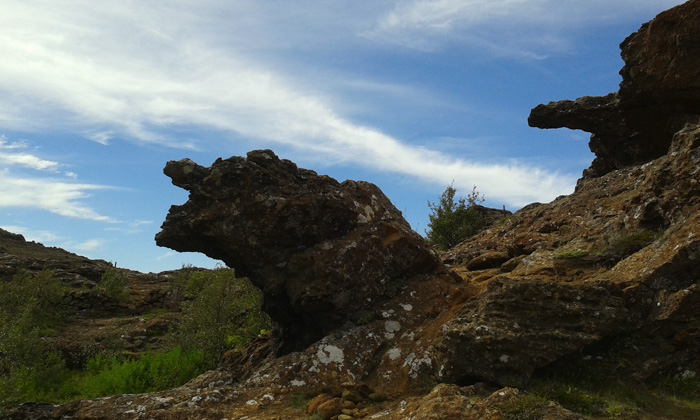 There were some eerie rock formations to be found. 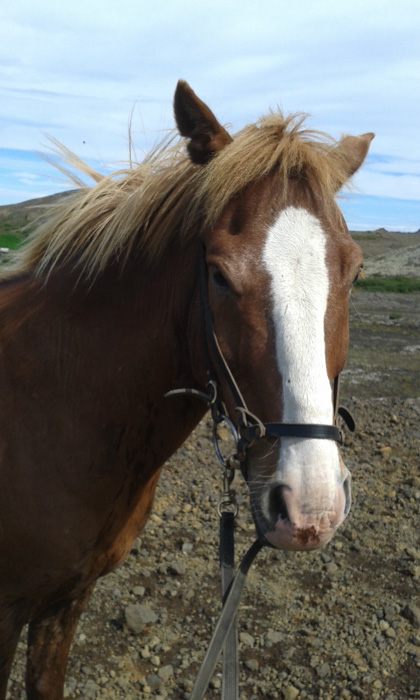 I hated to say goodbye to Surfer Dude. He was a good guy. The staff teased him about his ears, which both looked like chunks had been taken out. No one knew what had happened to them.

The staff didn't know how he scraped his nose, but they put ointment on it.

When I unsaddled him at the stable, he stayed with me rather than run off to roll like the other horses. I scratched him well, but I had to catch the bus to the hotel so I reluctantly said goodbye.

Although I ride 3-5 days a week at home, it isn't often that I ride four+ hours in a day. Since the seat on the gaited horses is somewhat different, I was concerted that I'd be really really sore, but I'm happy to say that I was not.

I would recommend this excursion to experienced riders. I can't comment on the experience for the beginner groups.