The Vikings were the first European settlers of Greenland. Erik the Red, exiled from Iceland for killing a man, established the first settlement in the 10th century and later returned to Iceland to recruit more settlers. The joke going around was that "Greenland" was the first real estate marketing scam, because even during the medieval warm period it wasn't much greener than it is today. In any event the Vikings occupied Greenland for over 500 years. To put that into perspective, the English arrived at Jamestown only a little over 400 years ago.

It may have been discovered by another European, however, some 400 years earlier: an Irish monk known as St. Brendan the Navigator. This traditional story has no hard evidence to back it up, but adventurer Tim Severin did succeed in making a similar voyage in a recreated hide boat.

Although there is no controversy over whether Erik found the first settlement, there have been questions raised about whether the site that we visited is it. Scholars may care, but we don't. 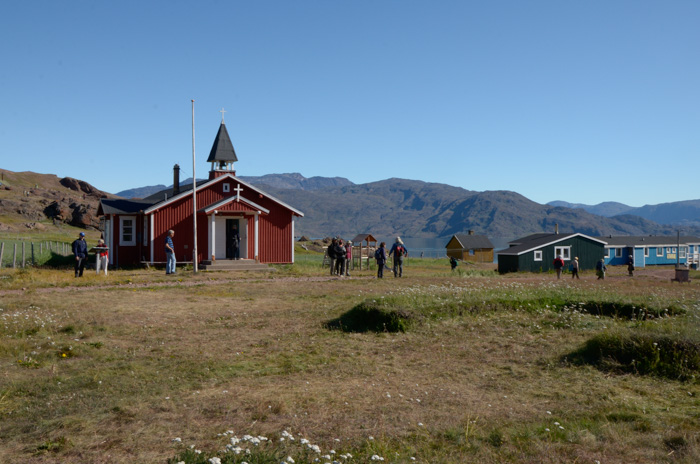 The low turf walls in the foreground mark the actual site excavated in the 1960s and identified as the location of Tjoldhild's church. She was Erik's wife and a convert to Christianity. The Saga of Erik the Red, Chapter 5, describes how Leif Eriksson brought the faith to Greenland from Norway.

The modern village is called Qassiarsuk. The red building is the modern church. 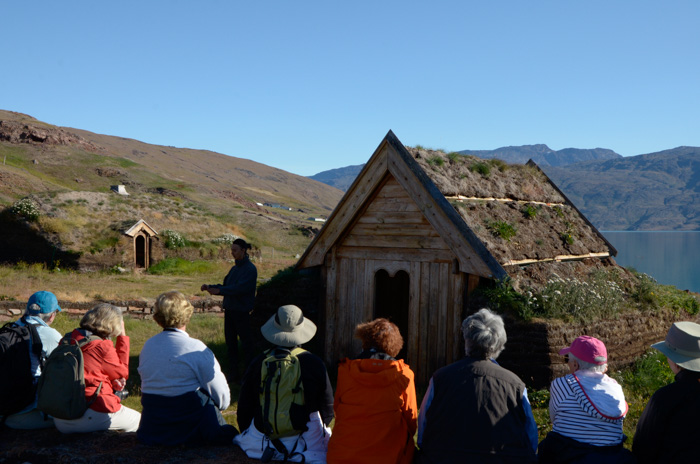 This reconstruction of the original church shows its small size and the thick turf walls used to protect it.

A reconstructed longhouse can be seen in the background. 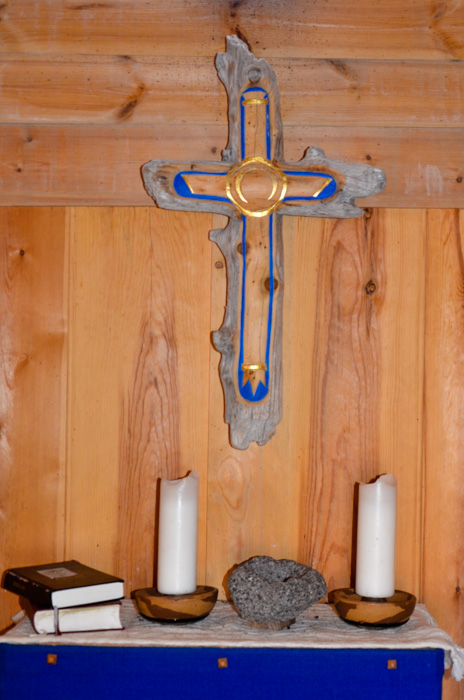 A recreated altar inside the church features a driftwood cross. 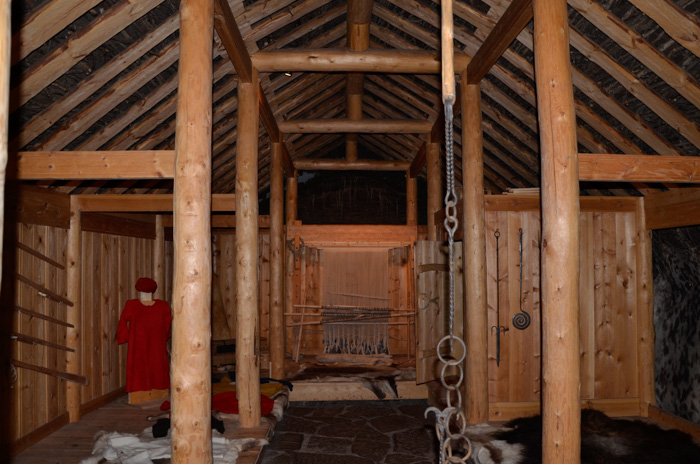 Implements of everyday living are on display in the interior of the longhouse. 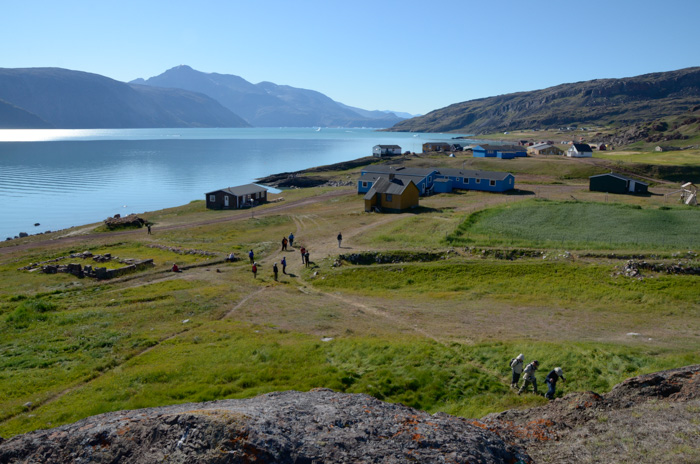 The excavated area in the right-center of the image marks the original location of the long-house. The ruins of a later church are on the left.

Livestock spent the winter in a portion of the longhouse. They were accessible for feeding and also provided additional warmth.

No one knows whether complete buildings were constructed of stone or only foundations. Upper structures were likely to have been wood and turf.

During the time of the Viking settlements there may have been large enough trees in the area to provide building lumber. Other lumber would have been imported from Norway and driftwood served a variety of uses. 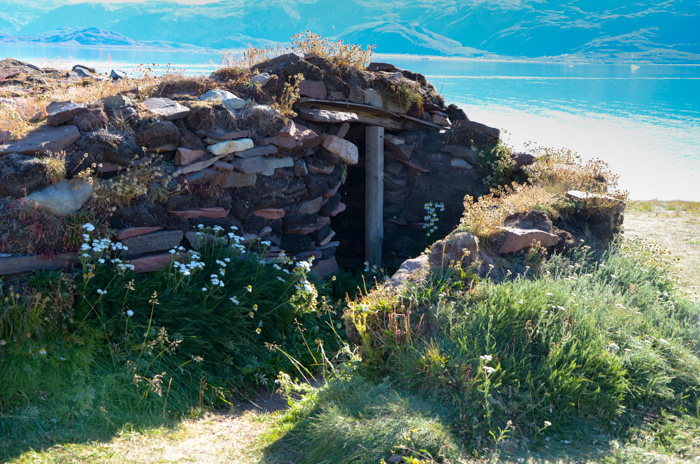 Later Inuit settlers scavenged stones from the Viking ruins to construct homes such as this one.

It had a protected entrance here and an additional tunnel entrance on the far side. The Inuit dwellings we saw in Alaska also had tunnel entrances to minimize cold infiltration in the winter. 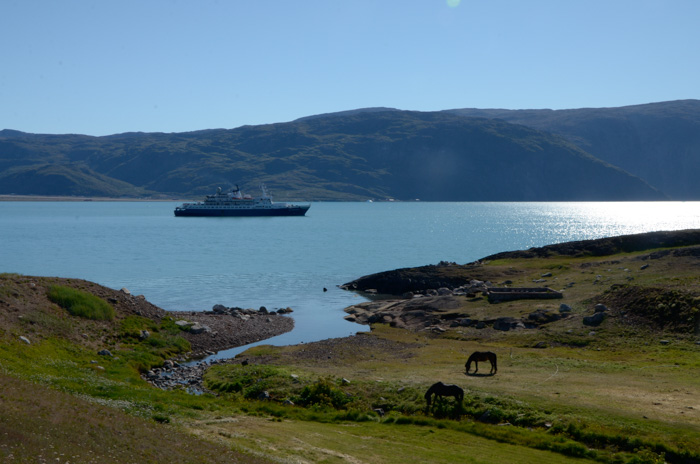 Narsarsuaq airport is across the fjord from Qassiarsuk. Part of the runway can be seen behind and to the left of our ship. A number of our travelers took an optional excursion to the ice sheet via helicopter. 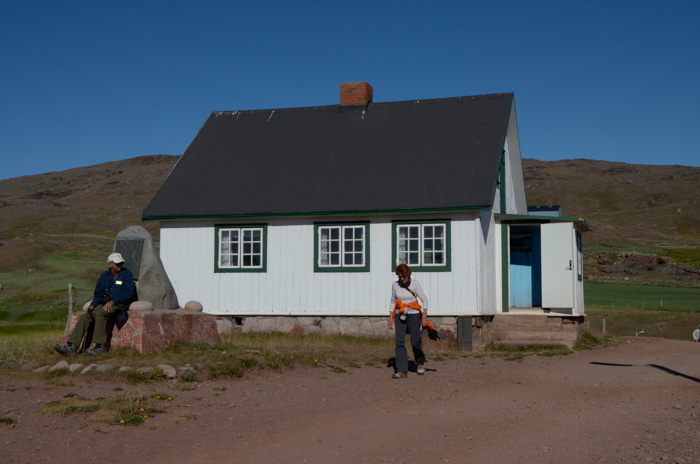 The Brattahlíð village site remained abandoned until 1924 when Otto Frederiksen moved here, built this house, and established a sheep farm. The house is now a small museum with original furnishings and other exhibits.

High above the village is a bronze statue of Leif Eriksson, who sailed from this spot to North America. Who would have guessed that there is a web page dedicated to statues of Leif Eriksson?

This particular statue is a copy of a 1962 original in Seattle. It was placed in 2000 to commemorate the 1000th anniversary of his voyage. Another replica is in Trondheim, Norway, and there are busts that have been created from the original. 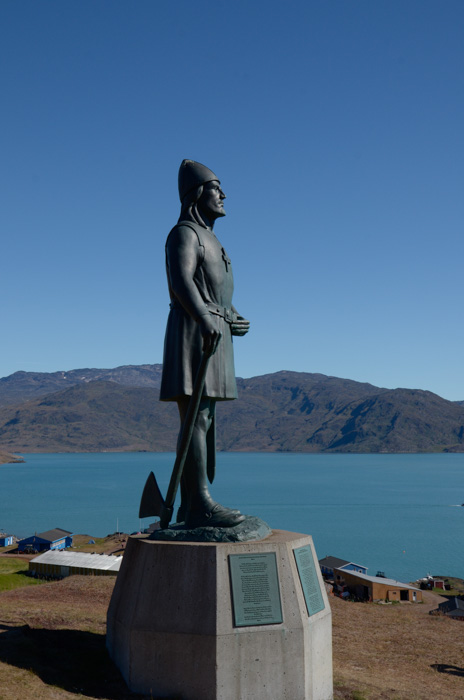 A close-up of the statue. 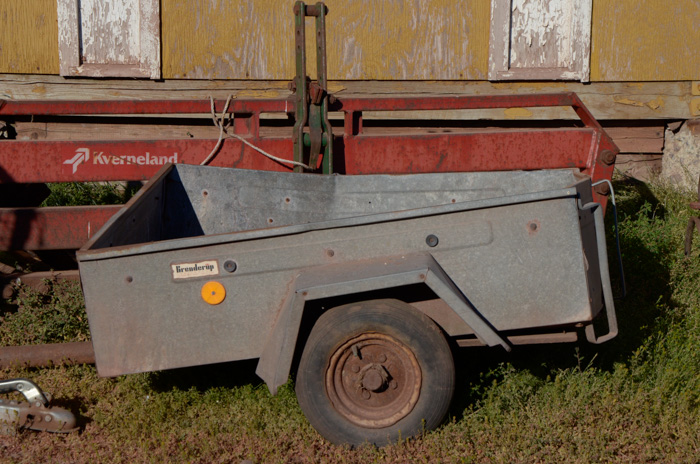 Why on earth would I include a picture of a ratty trailer?

My horse trailer, which I've had since 1993 is by the same manufacturer: Brenderup. It has served me well all these years.

About four or five years ago Brenderup was bought by a German conglomerate, Thule Group, which promptly pulled the plug on the US operation. Apparently it doesn't even make horse trailers for the European market anymore. It's too bad because the US folks were fine people and had committed themselves to this brand. Most of the actual manufacturing was done in Texas using only a few European-supplied parts. Globalization can bite both ways.

In the years since this trip I have sold my trailer. It was still in good mechanical condition, but needed body work. The new owners have refurbished it. They were thrilled to get a fine trailer for a small sum, and I was even more thrilled to find it a new home.

The Zodiacs returned us to the ship before lunch and we cruised to our second stop of the day: Narsaq.