Napassorssuaq Fjord was our next destination. We saw no traces of human occupation, but we saw glorious views and had another encounter with polar bears. 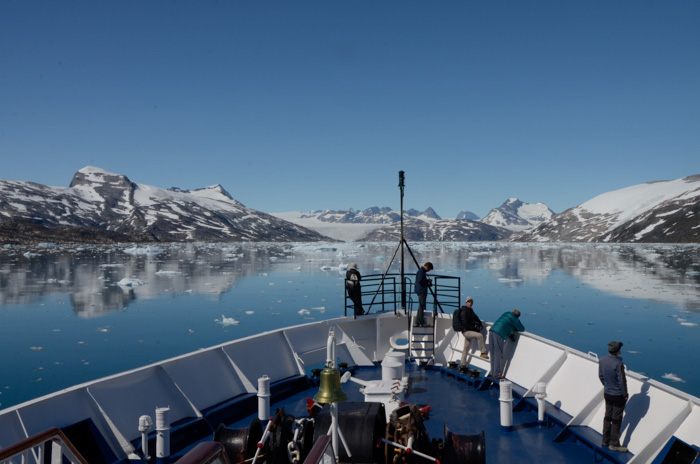 The waters of the fjord were remarkably still with breathtaking reflections. 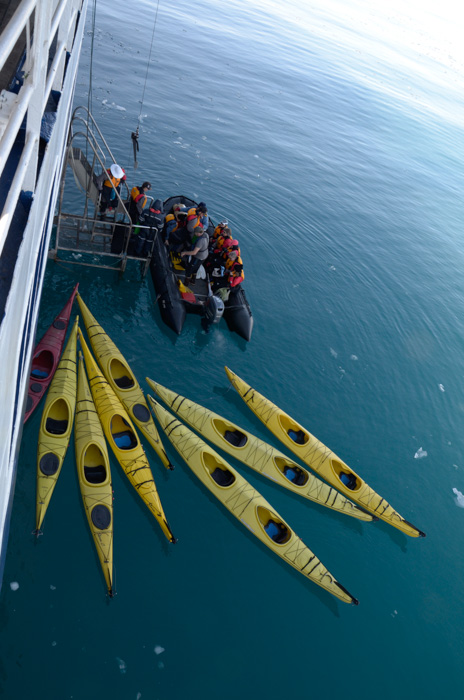 The expedition included an option (for experienced kayakers) of sea kayaking at selected locations.

The "suiting up" spot was outside our stateroom. It was a sight to see our fellow travellers in their special suits, form-fitting life vests, and spray skirts hanging down to their knees.

The kayakers didn't load their craft from the ship. A Zodiac took them to the location they would explore. They then boarded the kayaks from the Zodiac. 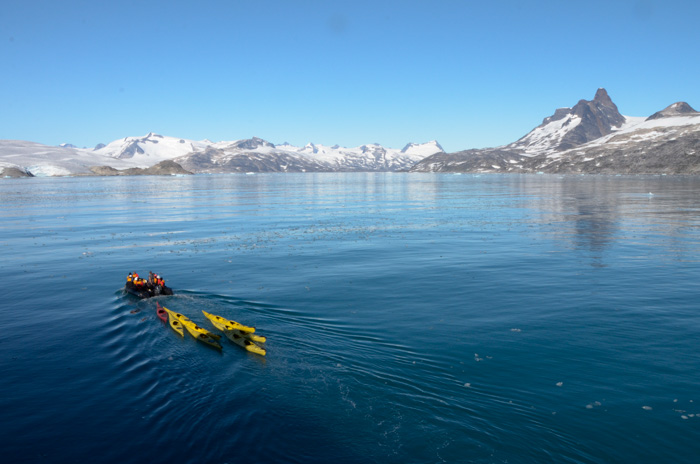 Off they go with kayaks in tow. We never saw them once they left the ship, so I couldn't get a picture of them in action. They all enjoyed the experiences. 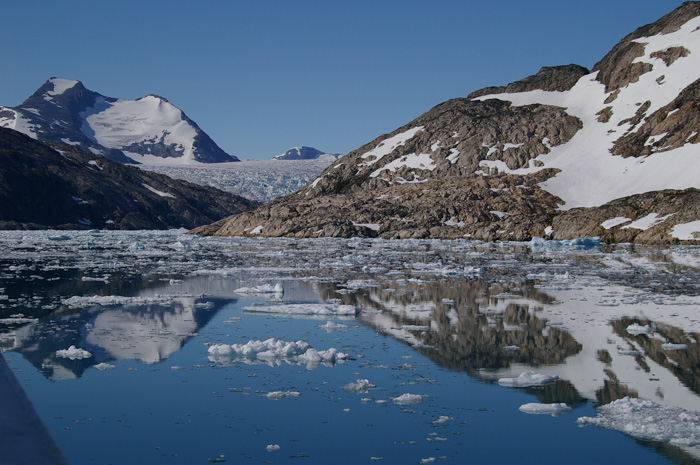 Once the kayaks were away, the ship proceeded to the location that the Zodiacs would explore.

Jim and I elected to stay on board rather than take to the Zodiacs. It meant that we got a great overview of the magical polar bear encounter even though we weren't up close and personal. 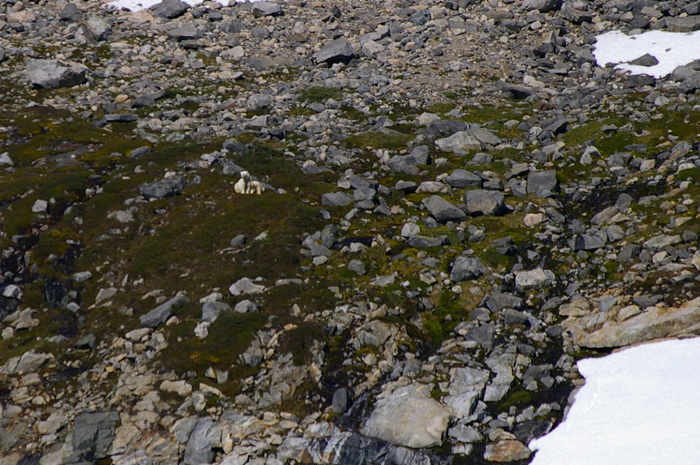 This mother bear had only one cub. She seemed in much better condition than the earlier mother bear. The cub was larger as well. I don't know whether the difference was due to the single cub or whether the cub might have been older. Cubs stay with their mother for 2 1/2 to 3 years. 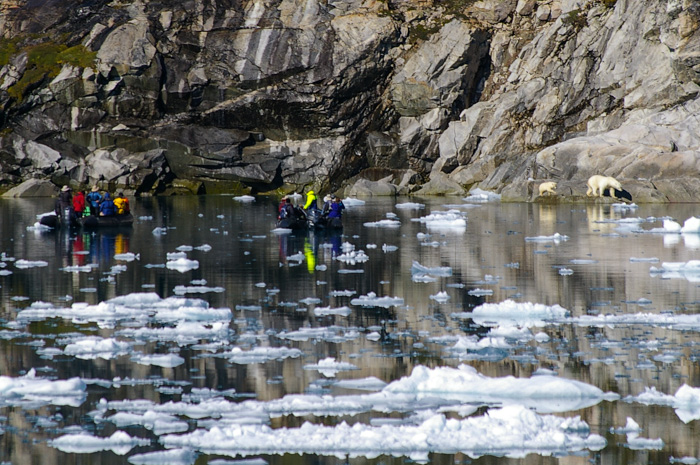 After prowling around the shore and looking like she would head for the hills, mom approached the shoreline in spite of the presence of the Zodiacs, which maintained a respectful distance.

She alternated between suspicion and curiosity, but curiosity won out. Imagine everyone's surprise when the bears came right down to the water! 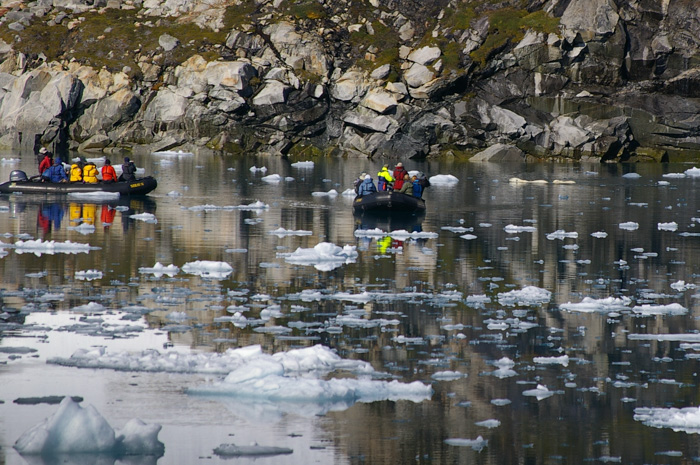 And then the bears eased INTO the water and swam along the shoreline (they are to the right of the right-most Zodiac).

The Zodiacs promptly retreated. I expect that the passengers were under strict instructions to keep quiet, but there was plenty of oohing and aahing on the ship! 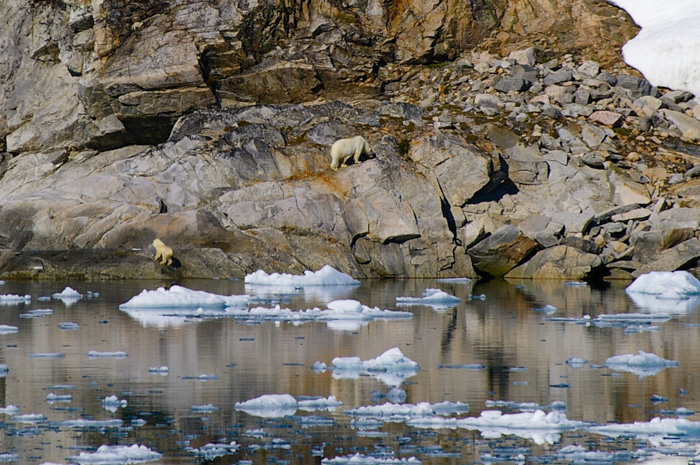 Their curiosity satisfied, the bears hauled out and moseyed off into the mountains.

It was an amazing experience, even for those of us on the ship. The folks in the Zodiacs were on Cloud Nine! 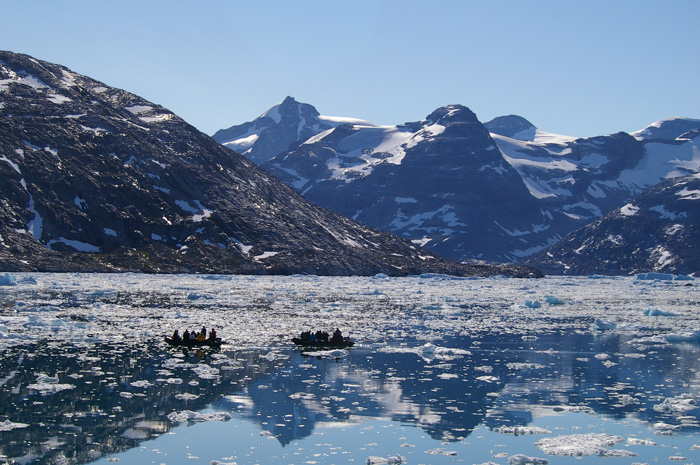 That wasn't the end of the excitement. As mom and kid wandered off, the Zodiacs continued their exploration of the fjord. Imagine their disbelief when they encountered ANOTHER bear in the water. He climbed onto an ice floe and stood up on his hind legs to get a better look at these strange craft. I've seen some of those pictures and they are pretty amazing.

Was he trying to decide if tourists were good to eat?

Bears aside, this was the most beautiful place of the entire trip. 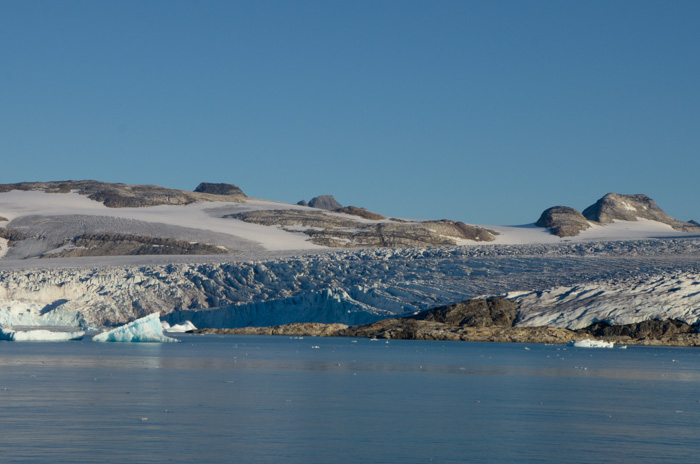 Just one other picture from Napassorssuaq Fjord. The rocks have been so recently scoured by the ice that no plant material has gotten established.

The darker ice around the rocks has no new snow layer from the current season. The bright white is fresh snow. The darker color absorbs more sun energy and hastens melting.

We skipped another Zodiac outing that gave people the opportunity to walk on a glacier. We've skied on glaciers and didn't feel the need to walk on one ... even in Greenland. Some folks had a great excursion, but others ran afoul of treacherous bogs and returned to the ship with a lot of Greenland mud for a souvenir! 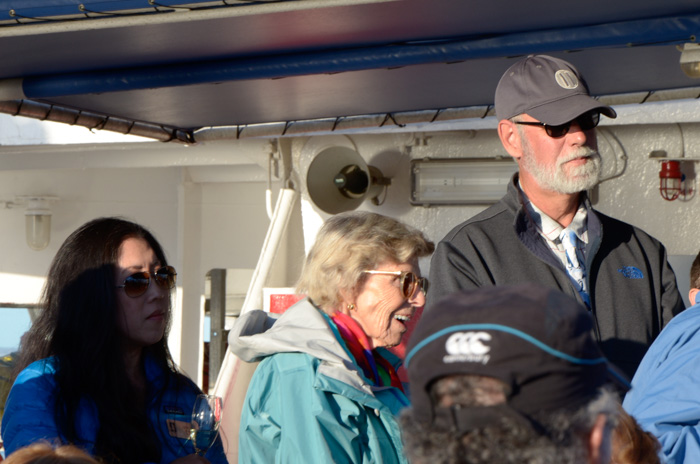 Leslie Kim, on the left, and Rob Dunbar, on the right, were the Stanford staff with us on the trip. Leslie was our Stanford Leader, and she did a fabulous job of keeping up with us all and generally herding cats.

Rob was our Stanford lecturer. All of the lectures that we heard on board were informative and entertaining. I took great notes on my laptop. Unfortunately I managed to delete most of the content in my "lectures" file. Next time I'll make sure that I create separate files for each lecture!

Even though Rob has made his slides available to the attendees, they really do need the notes to be completely intelligible to this non-oceanographer. There is much, however, that I do remember -- enough to find sobering.