"Flatey" means "Flat" in Icelandic. I didn't find it particularly flat, but compared to much else of the country I suppose it is. 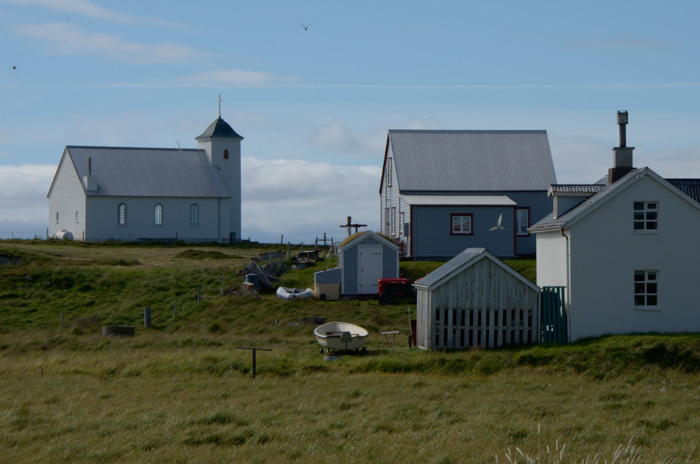 Our morning stop the next day was Flatey Island. This once-thriving community is now a summer tourist destination. Only a couple families live on the island year-round. As in most countries, the Icelandic population has migrated to the cities where services are nearby and jobs are not as arduous. 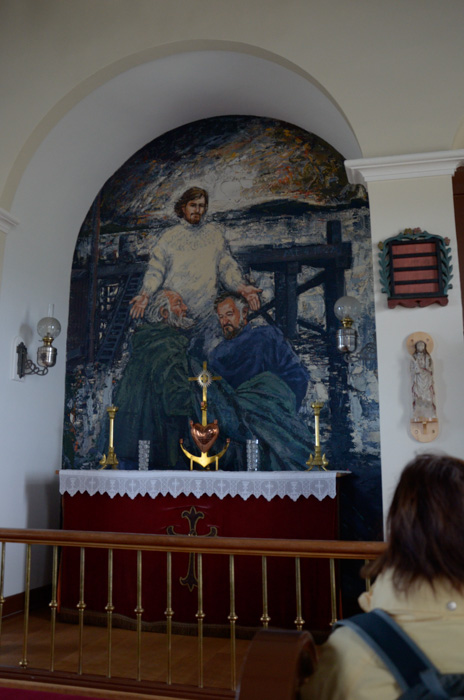 Our first stop was the little church pictured above. Paintings decorated the ceiling as well as this altarpiece showing Jesus inviting Andrew and his brother Peter to become "fishers of men." The artist was Catalan painter Baltasar Samper.

I found the representation of Jesus as Icelandic to be charming.

The small icon to the right of the altar came from a much earlier church. 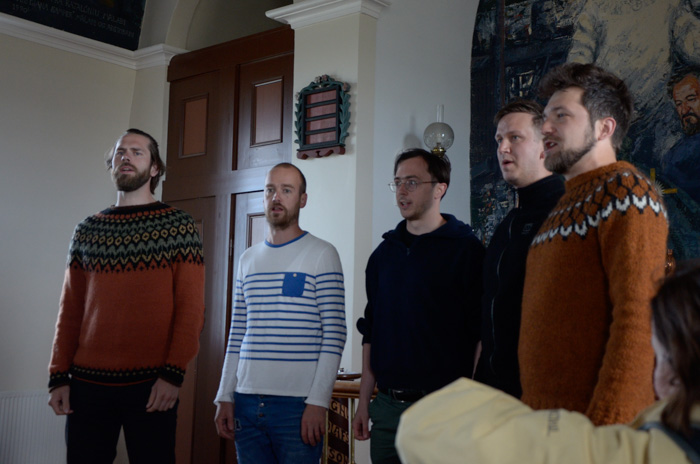 These five young Dutch men were visiting Flatey and sang some traditional Nordic songs for us. They were really good, but I can't remember the name of their group. They were planning a US tour later in the year.

Stanford sends out a little notebook for travelers to record their experiences so they don't forget details like this. But did I use it? Nooooo. Not only that, but I find that the notes I thought I saved on my computer of all the lectures were lost due to operator error! Oh well. 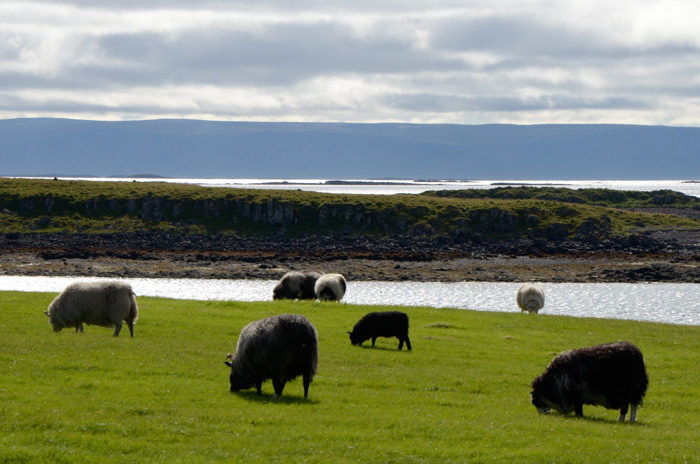 Iceland is known for its woolen products, which is why I wanted to get a sweater. One of the recommended books for our pre-trip reading was Independent People by Nobel prize winner Halldór Laxness. The version I read had an introduction by a man who had been fascinated by its main character, Bjartur. He once met Laxness and told him about this fascination. Laxness' comment: "But he's so stupid!" When commenting on the theme of the book, Laxness replied succinctly: "Sheep."

The book is much more than that, of course, but sheep do figure large. I was pleased to see this small flock of Icelandic sheep. I was astonished at the variety of colors -- including a spotted one.

The sheep are sheared twice each year in the spring and fall. They don't need a heavy woolen coat in the winter because they are kept inside away from the deep snows. 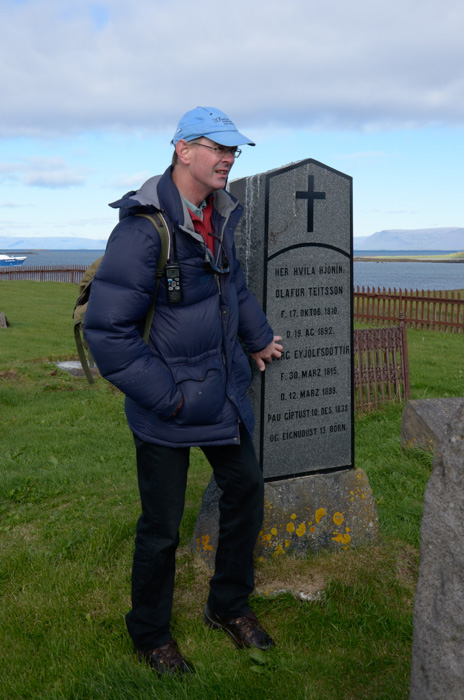 Ragnar Hauksson accompanied us on the Icelandic portion of the cruise. Many of us visited the cemetery on Flatey and he took the opportunity to explain Icelandic names. The information at the link is much more detailed, but Ragnar focused on the use of patronymic names such as those of the husband and wife on the tombstone: Ólafur Teitsson and Björg Eyjólfsdóttir. The husband and wife are both named after their respective fathers. There is no concept of a "family name" as we know it here.

Ragnar said his young son was appalled when he first heard of the practice of the wife's changing her name upon marriage. "But how could she become the daughter of her husband's father?" 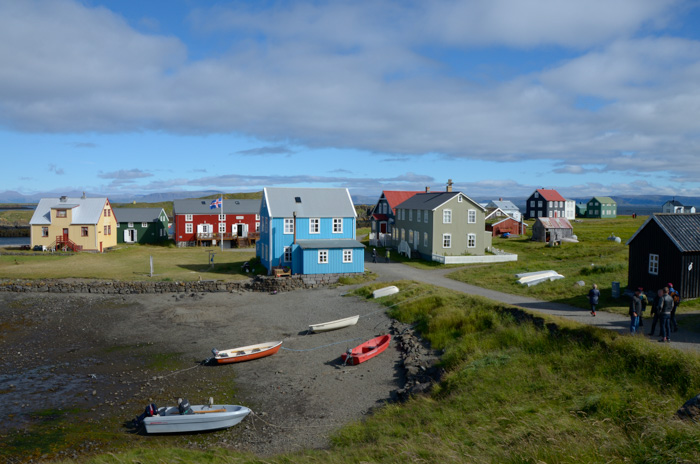 Looking at the WWW while putting this log together, I find that this is perhaps the most common view of the village on Flatey. It is a pretty one.

Whenever visitors come to town, the locals put out food to attract arctic terns. We asked if the larger gulls stole food from the terns. The gentleman doing the feeding laughed and said that the terns were much more aggressive. The poor kittiwake in the center has made a play for some fish and is about to become lunch itself for the terns.

Our feeder went on to say that a few years ago natural food for the terns had been really short so they would mob the area on feeding days. They would even take food from the tourist's hands. He was glad that times are better now. Not so many birds came and those that did were shyer.

These birds migrate from their northern breeding grounds to Antarctica and back every year -- the longest migration of any bird. 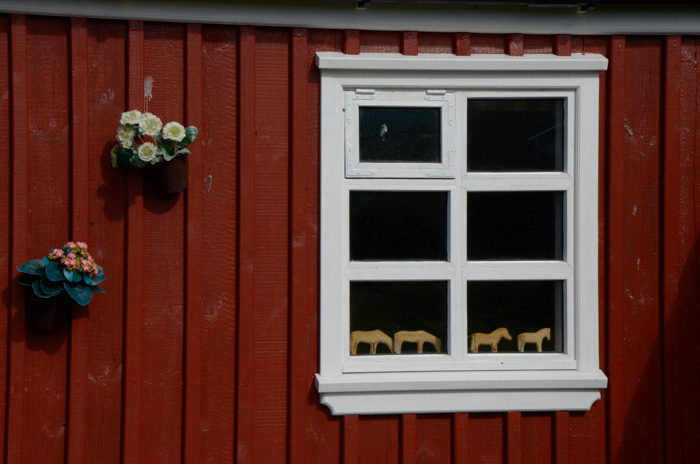 Village houses had many whimsical touches. 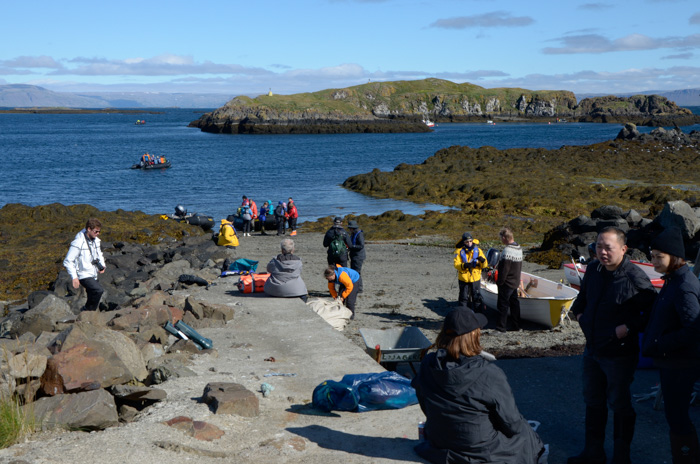 Flatey Island was our first Zodiac expedition of the voyage.

We had box lunches that we could either eat on the island or take back to the ship. Most people elected to picnic on the ship, but there were a few folks munching away in the sunshine near our landing point. 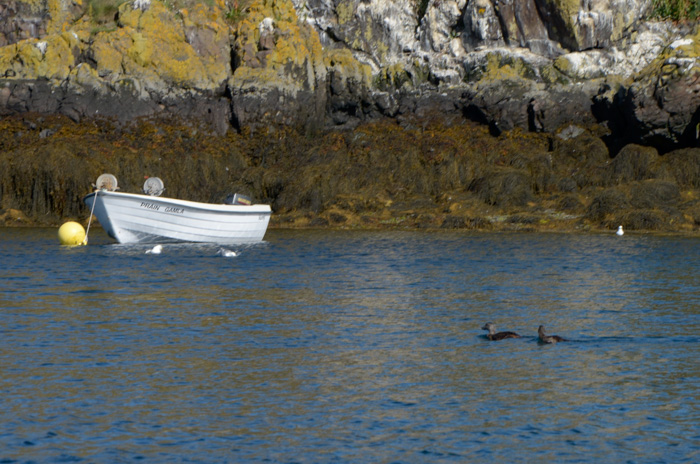 As we left the island, each Zodiac took a short tour of the nesting areas.

We saw these two eider duck hens in the water.

The male eider ducks have striking black & white breeding plumage, but after breeding they change to an "eclipse plumage," which one of our naturalists described as "the boys running off together and spending the winter cross-dressing."

Collecting eider down is an ongoing home industry in Iceland. 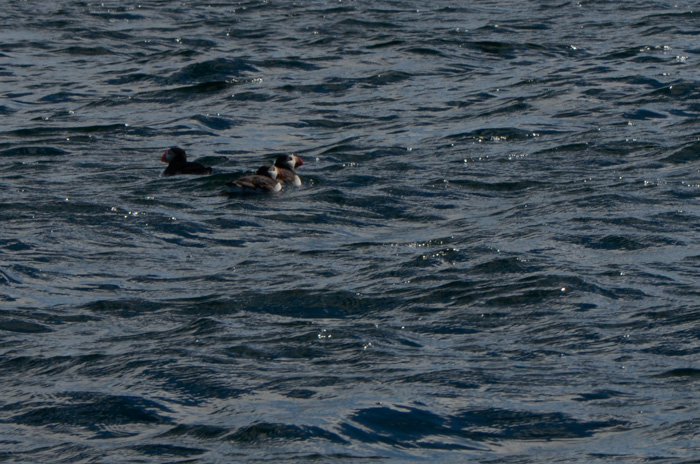 We also saw an abundance of puffins in the water. 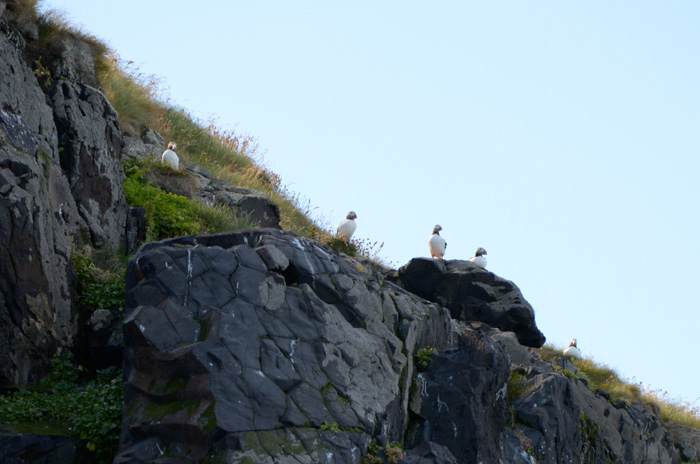 And on the land.

Sometimes I think I should get one of those super-duper long lenses that some folks carry around. But then I'd have to carry it around.

After our bird cruise we returned to the ship, which proceeded to Latrabjarg, one of the largest bird nurseries in Europe.