The afternoon saw us on Vigur Island. The entire island is owned by a family that once farmed it. Now they focus on tourism during the season and live and work elsewhere otherwise. Seabirds nest here in abundance. 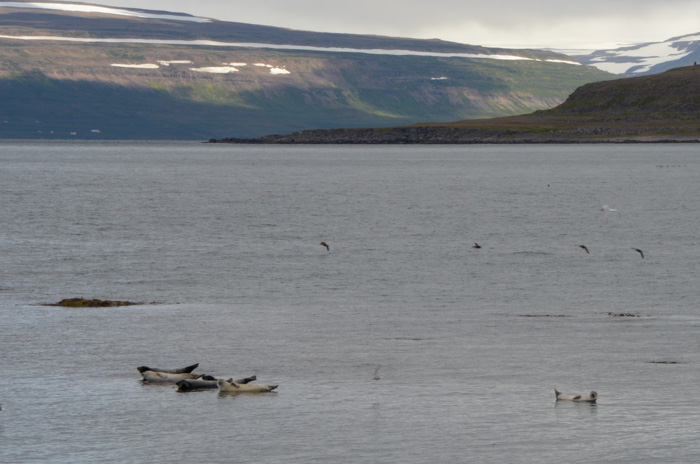 Earlier in the cruise, we had divided into four groups to facilitate disembarking whenever Zodiacs were to be used. Jim and I selected group three because we were already assigned to lifeboat three and keeping things consistent made it easier to remember. The order in which the groups were called changed for every excursion. At Vigur the various disembarkation groups stayed together for the guided tour of the island rather than dividing into long/medium/short walkers.

As we assembled for our tour, we walked past these basking harbor seals. They are true seals, not sea lions, and are ungainly on land. 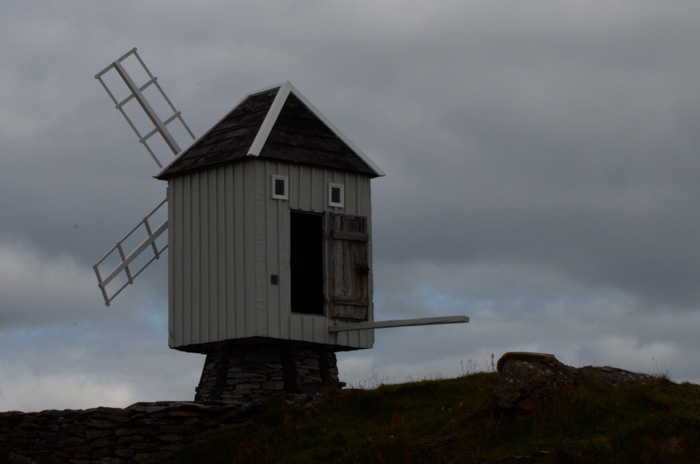 Our assembly point was this small windmill, the only surviving such structure in Iceland. The mill isn't operational at present, although there are plans to restore it as money becomes available. The long pole is used to turn the entire building to better capture the wind. 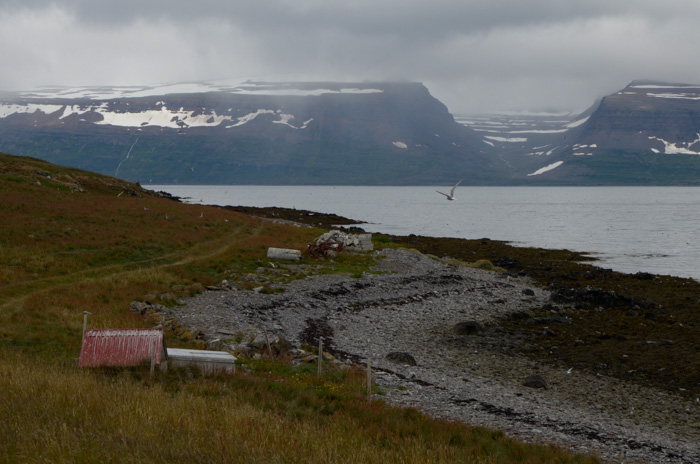 This was an ideal place for terns & puffins and nests were closely packed into the tall grass. Other seabirds nested nearby. 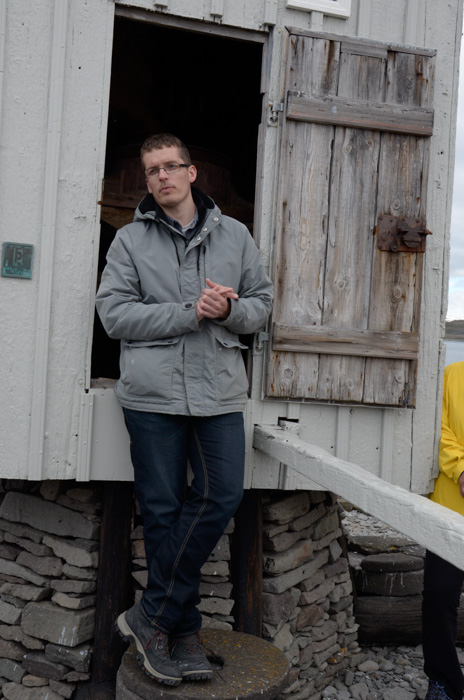 The guide for our group belonged to the family that owned the island. He described the hardships associated with living on and farming the island, especially in the harsh winters. They now live in the city except for the summer tourist season and the island is allocated to sea life rather than sheep.

While our guide was talking, I was distracted by this black guillemot bringing home the bacon, er, fish, for his or her chicks. The nest appeared to be in the base of the windmill, but I didn't investigate too closely for fear of disturbing them. 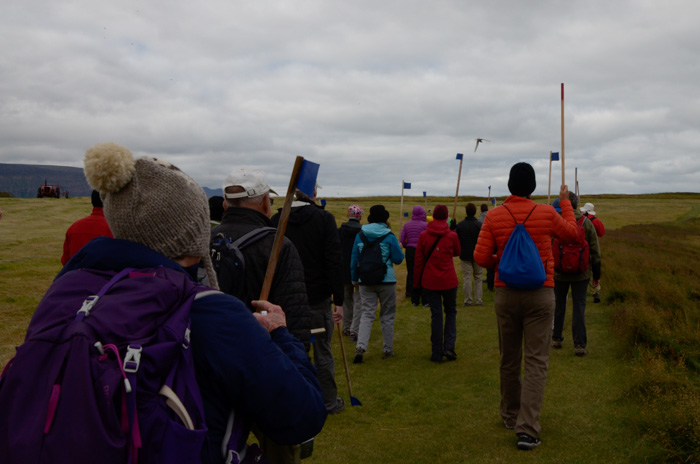 As we began our tour of the nesting areas, we were issued "tern deflectors." The arctic terns aggressively protect their nests and attack intruders. Since they go for the highest point, the sticks ensure that your punkin head is not the highest point. Without this precaution, their attacks can draw blood. Calling Alfred Hitchcock!

Our guide said that we were visiting late enough in the breeding season that the birds were less aggressive. Nevertheless, they did buzz noisily around. 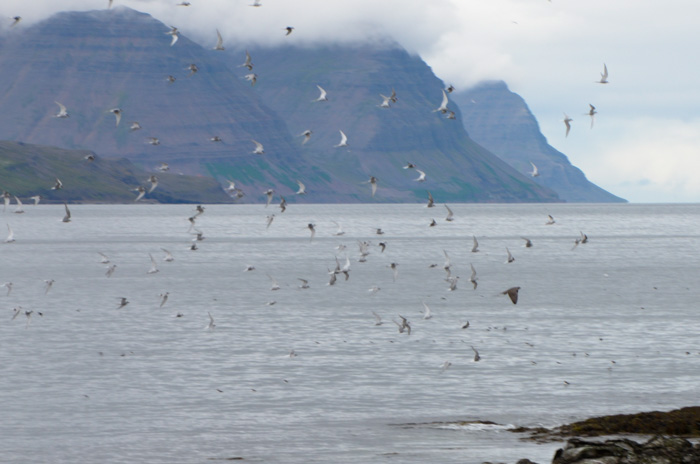 At a few points the terns were distracted from threatening the tourists to address a more present threat: a gyrfalcon. It was easy to determine when the predator was in the area by the noisy host of terns following every move.

The falcon is the larger bird toward the right of the picture. 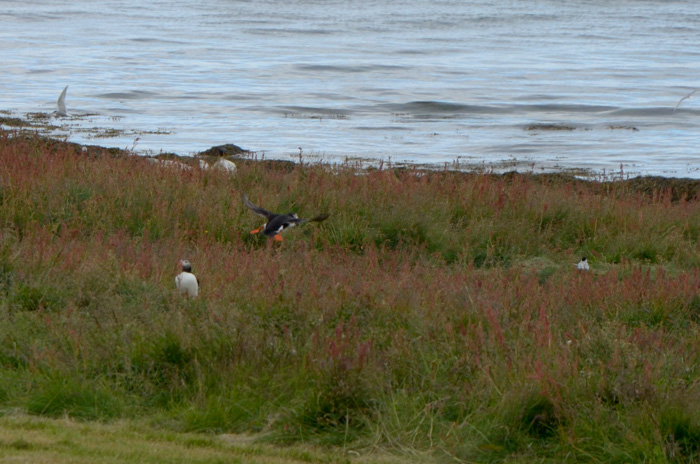 The puffins were not shy, but would fly off if I got too close for comfort. I think their fat little bodies with the bright orange feet are very cute. 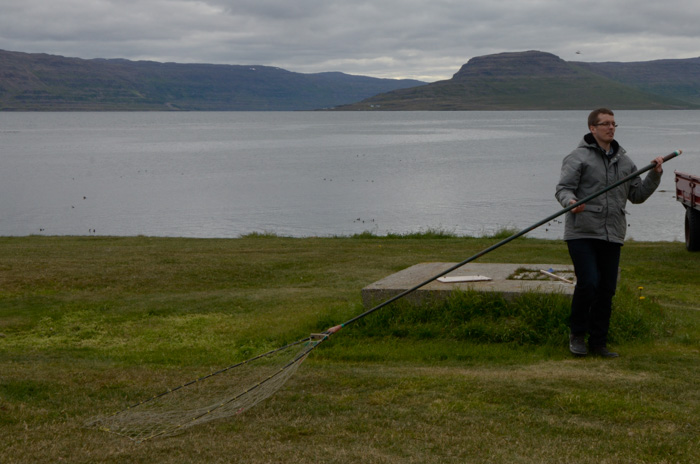 Speaking of fat little bodies, the puffins are said to be good eating -- at least to Icelanders. This is a puffin net. Our guide told how his grandfather could sit and snare passing puffins for taking to market. It didn't require much skill and no stalking -- just patience.

The bird with the bright orange legs hanging out with the terns is the common redshank.

After tea and cake at the island's coffeehouse, we returned to the ship for our goodbye to Iceland. We were sad to leave, but we weren't quite done yet. The ship's staff noticed a pod of humpback whales feeding not far from the island. 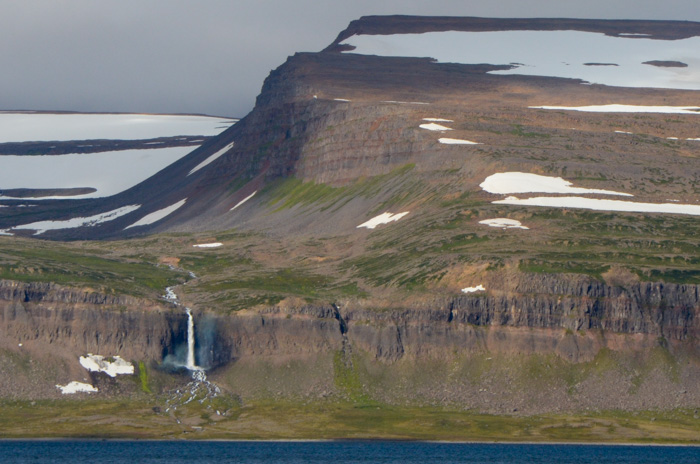 This stunning waterfall was on our way to the whales.

The horizontal layers, which we saw everywhere in the Westfjords, are due to successive deposits of volcanic eruptions. The "U" shaped valley behind the waterfall would probably have been carved by a glacier in the distant past. 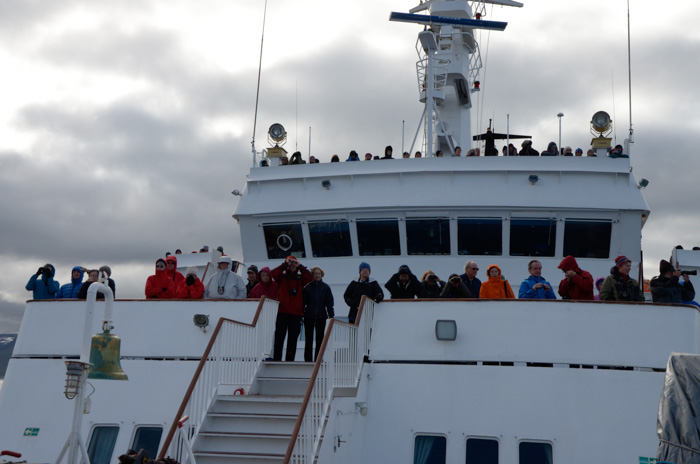 This was a common sight aboard the ship when there was anything to be seen, animal, vegetable or mineral. Or ice. I believe this was our first major whale sighting. There were ooohs and aaahs over every spout and fluke although the whales were pretty far away. 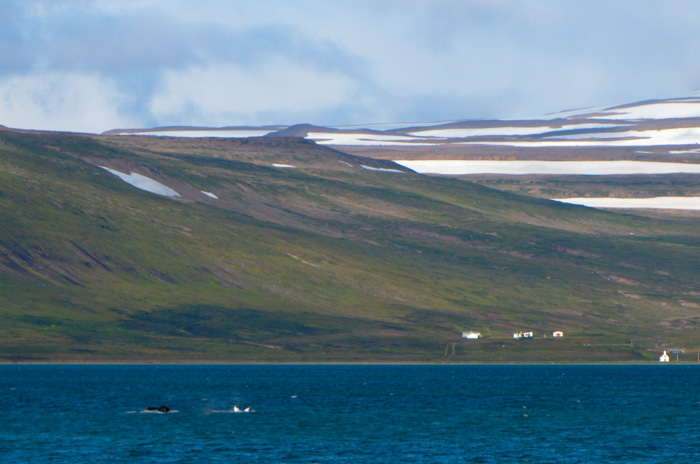 A pair of whales with an isolated hamlet in the background. The white markings on the flukes are as distinctive as fingerprints and have been used in various research programs on whale demographics. 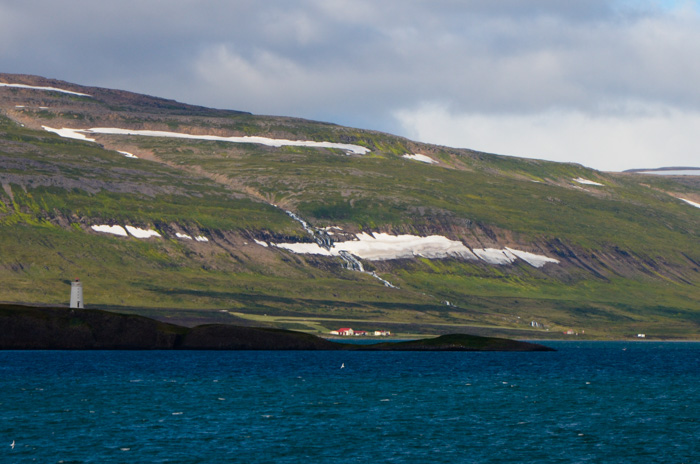 Isolated farmsteads seem to be the norm in this part of Iceland.

This is the only lighthouse that I remember seeing in the entire trip.

Now, on to Greenland!