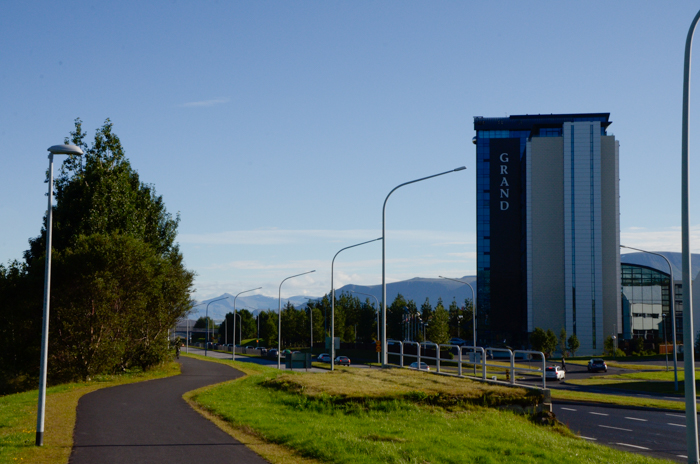 We arrived in Reykjavik a day early to provide time for my riding expedition. Our hotel room wasn't yet available so we deposited our bags with reception and set out to explore the city. The downtown area is compact and easy to navigate on foot.

Our goals were (1) to find something for breakfast and (2) to locate the hand-knitting association to check out Icelandic woolens. I had a mind to get a new sweater and had researched the best place to buy.

On the way downtown we passed a side street and noticed a gathering of folks on the sidewalk. It was a bakery serving yummy breakfast goodies. One goal down. 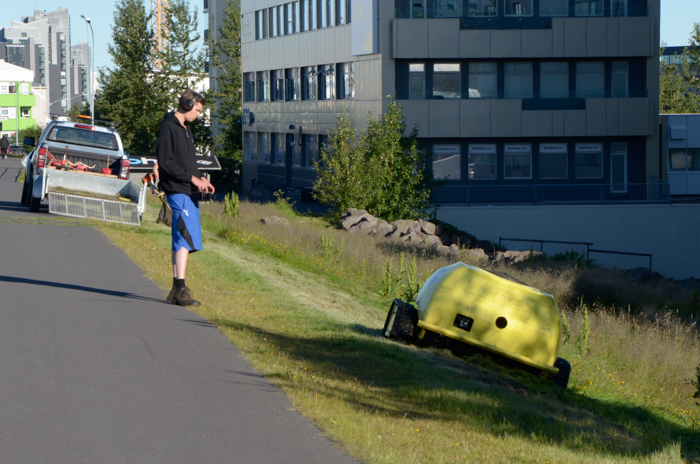 Landscapers in hilly Rockbridge County, VA, would love to have one of these remote-controlled mowers to cut the grass on steep slopes. 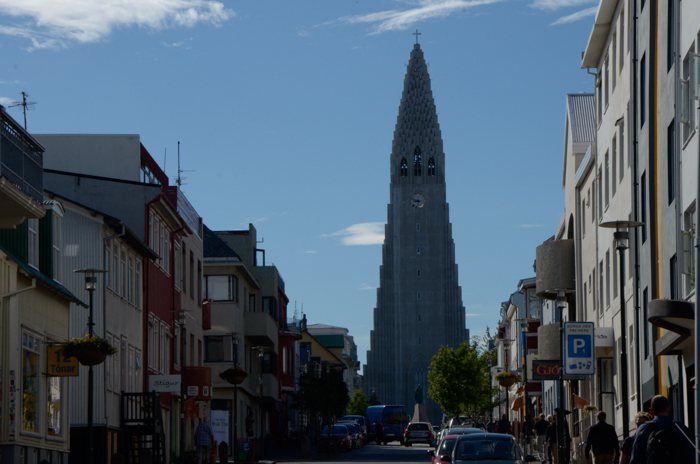 Hallgrímskirkja church dominates the Reykjavik skyline. We had read that a wonderful overview of the city could be had from the top of the steeple so it became our next port of call. We arrived at opening time and avoided the crowds. 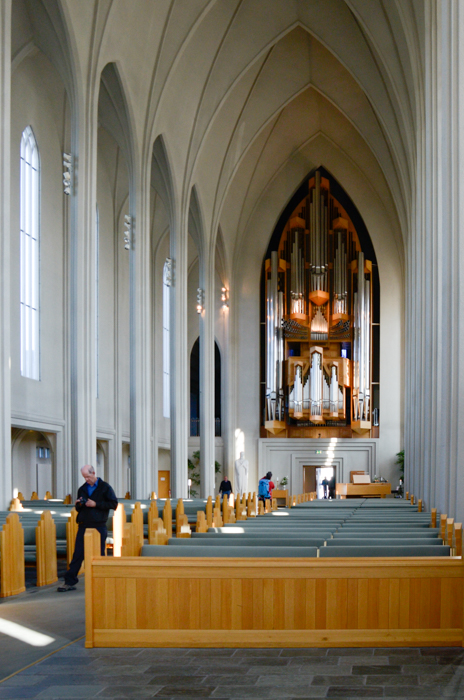 The organ dominates the rear of the sanctuary. A unique feature of this church was reversible pews. They faced the front for services and the rear for organ recitals.

There was a recital scheduled for noon the following day, but I was on a horse and Jim was busy finding plug adapters for our numerous electronic chargers. 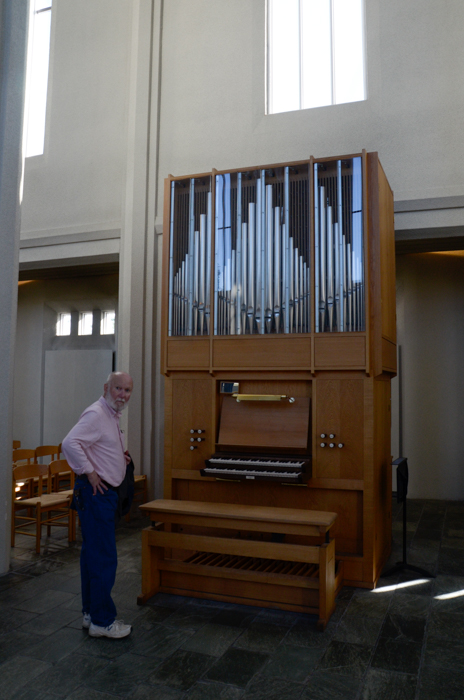 Jim found this stand-alone pipe organ in a side aisle. In addition to the pipes on the front, it had eight-foot wooden pipes on the back. 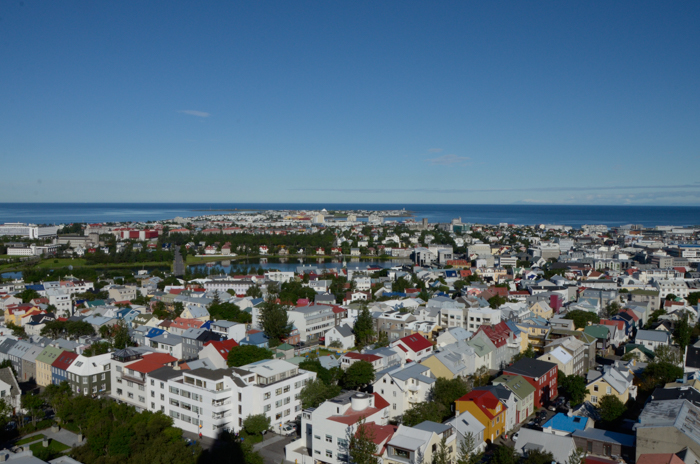 The view from the top was spectacular as promised. An elevator goes most of the way leaving two flights of stairs to the observation post. We were early enough that there was no wait for the elevator. 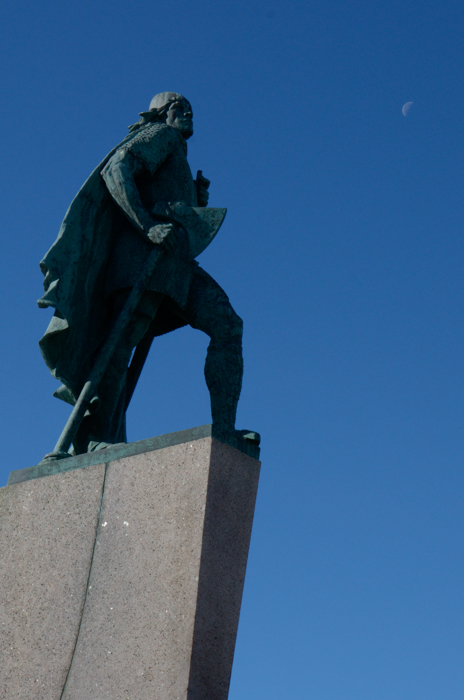 The US presented this statue of Leif Eriksson to the people of Iceland to commemorate the 1,000th anniversary of their parliament. It was designed by Alexander Stirling Calder, father of Alexander Calder, and stands in front of the church. 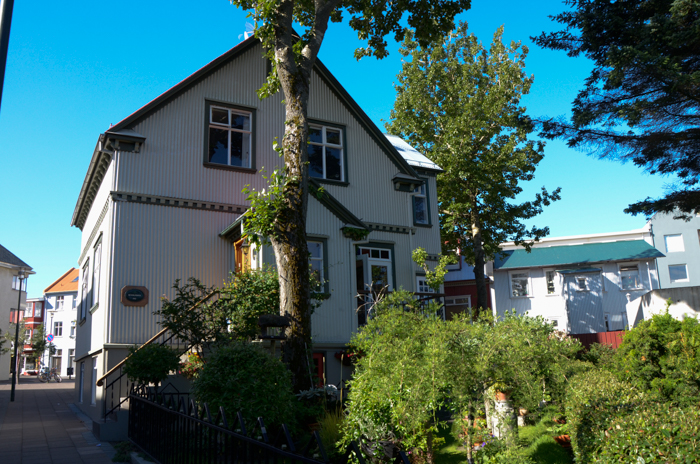 Reykjavik seems to be a very livable city. There are numerous residences in the downtown area.

Most houses were made of corrugated metal, but they were built in a variety of styles. This one included a small garden and had a plaque dating it to 1912. 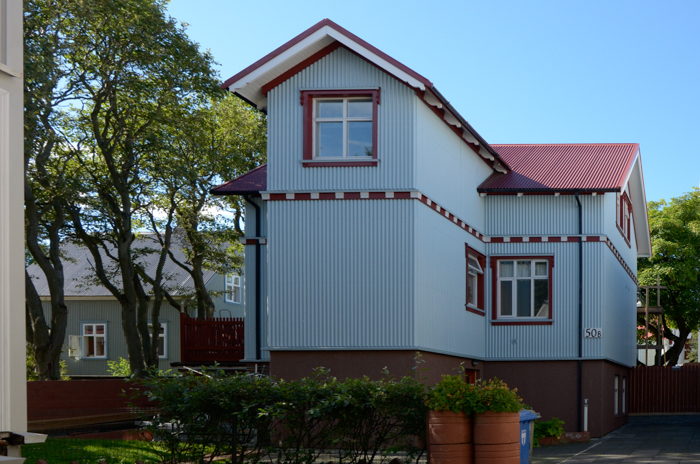 Downtown has a lot of infill development. The city blocks were quite large and there was a lot of space behind houses and stores that faced onto the street. Most blocks now have alleys leading to houses, such as this one, built in the center of the blocks.

When I asked the hotel reception folks for directions to the handicraft store, they said it was near the jail pictured here. There has been a new jail built elsewhere, but not all the prisoners have been migrated to the new facility.

Stone construction is rare due to the seismic activity of the island. 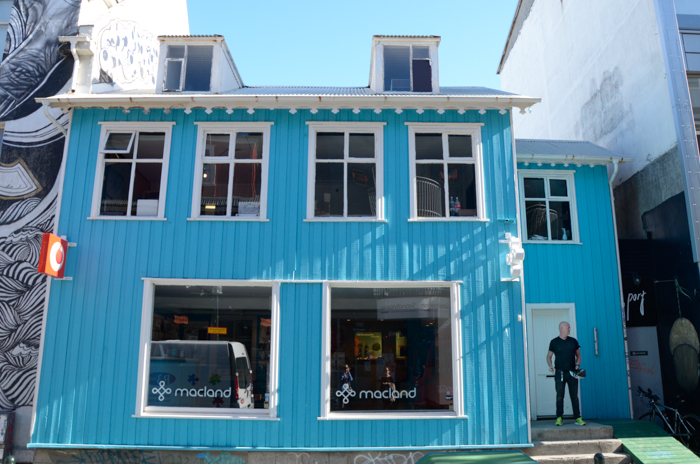 One of the rare timber buildings with board-and-batten siding.

Throughout our travels in Iceland and Greenland buildings feature bright and cheerful colors. Elaborate graffiti is also quite common.

The handicraft store was near this shop. I bought a knitted woolen sweater-coat. We asked the store to ship it home so we didn't have to pay the Value-Added Tax, which more than paid for the shipping. The VAT is refunded at the airport for goods taken out of the country, but since we weren't leaving via the airport I was puzzled how the refund would work. Shipping it solved the problem. 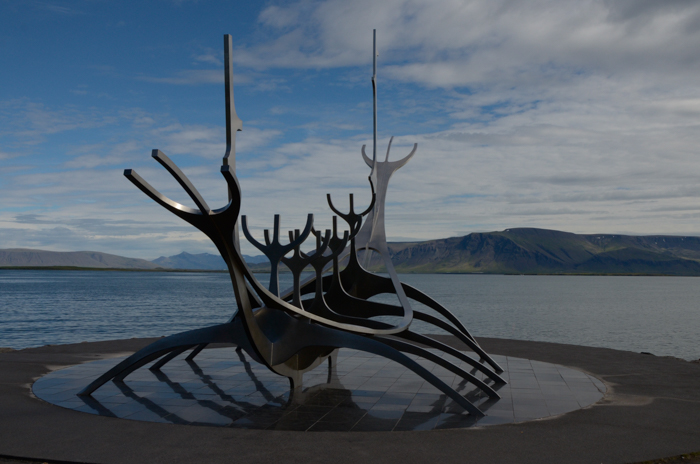 After visiting the handicraft store we walked down to the shore. This graceful sculpture is called Sun Voyager. It represents a dream voyage toward the sun -- not a Viking ship. 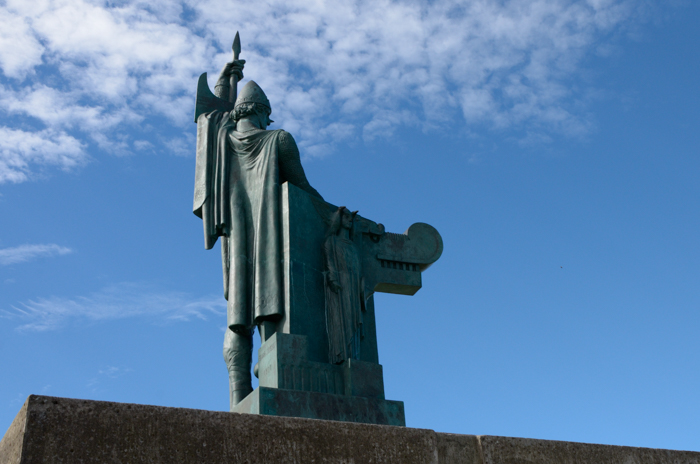 This monumental sculpture overlooking the harbor depicts Ingólfur Arnarson. According to the Book of Settlements, he and his men were the first permanent residents of Iceland starting in the 9th century. They named the location Reykjavik, or Smoky Cove, because of the steam from the many hot springs.

The angle of the morning light kept me from getting a good picture of the front of the statue. Plus I liked including the smaller figure representing Odin.

While I prowled around this sculpture, a groundskeeper was cleaning up stray weeds in the terrace -- using a flame-thrower! 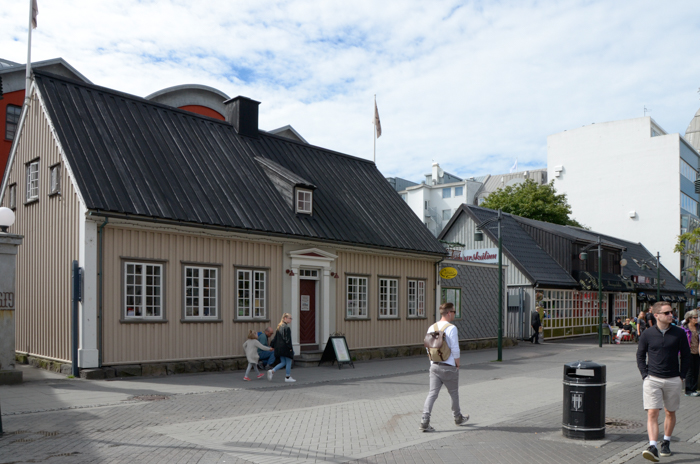 We enjoyed a delicious lunch at Caruso's Restaurant. The tan building where Caruso's is located is a replica of a very old building destroyed by fire some years ago. The grey building next to it is one of the oldest structures in Reykjavik.

We had a seat by one of the windows and enjoyed fabulous people watching. 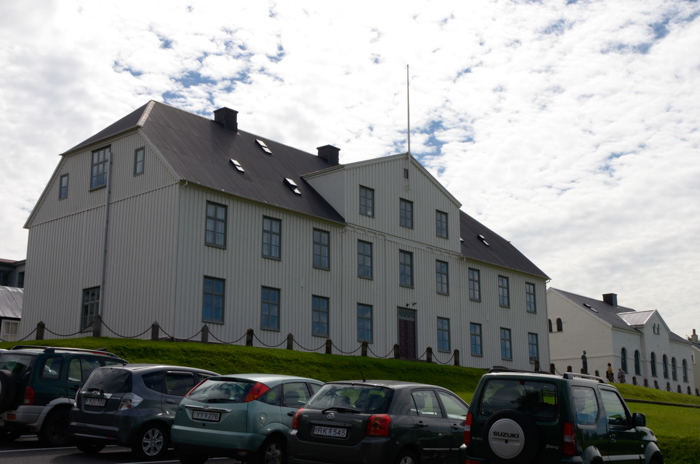 As we made our way back to the hotel, we passed the Parliament building. I've often thought that the opulence of our own capitol building contributes to the arrogance and grandstanding often seen in our own representatives. I wonder if such a matter-of-fact office building encourages a culture of service over power. 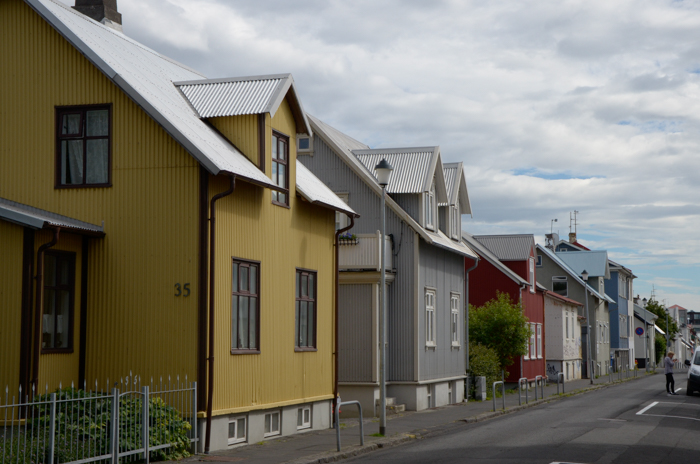 This streetscape illustrates the colorful residences in downtown Reykyavik.

Most houses were sided and roofed with corrugated metal. Wood for building is in short supply in Iceland and masonry construction can be fragile in earthquake country. 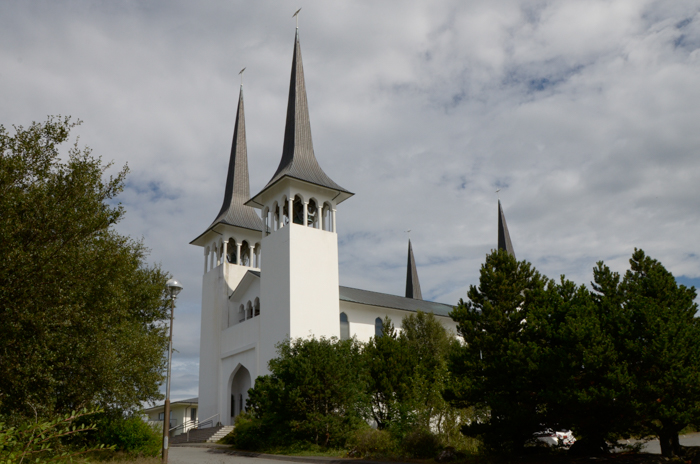 Our final stop on our way back to the hotel was this church. We had seen the spires throughout our time downtown and finally figured out how to get to it. There were no identifying signs. Research on the WWW turns up that it is called Háteigskirkja Church, that it is the only one like it in Iceland, and that it was consecrated in 1965, but I've not found anything else.

We saw numerous churches in Iceland. Although Church of Iceland (Lutheran) is still ostensibly the largest, most people are not "religious." There is great diversity and a growing number of people follow the ancient Nordic religion. See Wikipedia for a summary of Icelandic religious practice.

We headed back to the hotel to check in and collect our luggage. But not to nap, oh no! Gotta work on that time change.