On the Silk Road in Central Asia
Uzbekistan – Samarkand

After a day & night in Tashkent, we were off to Samarkand. In retrospect it is amazing how much we were able to do & see in only one and a half days and two nights. This was the first of the fabled cities of my dreams that lived up to its image. There are five separate UNESCO World Heritage sites in and about Samarkand. We visited four of them. The other (an archeological site) we drove by many times. 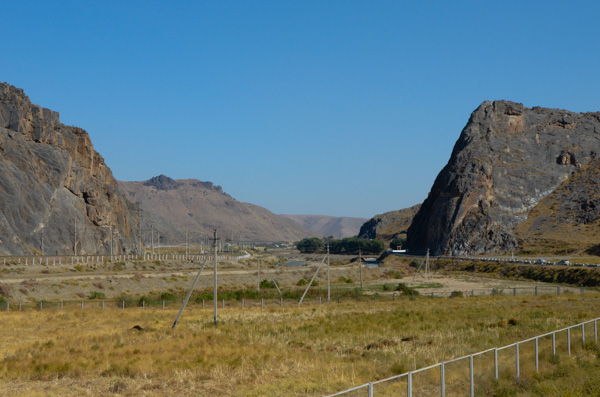 This pass is known as "Tamerlane's Gate." It is the most accessible route through the mountains to Samarkand. This picture is looking back toward Tashkent.

Jama was adamant that we NOT cross the busy highway to get better pictures, but of course we all did.

As was so often the case we passed roadside markets. When I asked Jama whether it was better to visit Central Asia in the spring or the fall, he expressed a slight preference for the spring, but allowed as how the harvests of fall are also appealing. The summer is brutally hot and the winter piercingly cold so neither is good touring weather.

For most of our October trip, it was pretty warm during the day. I was glad it was no hotter. The nights were cool. 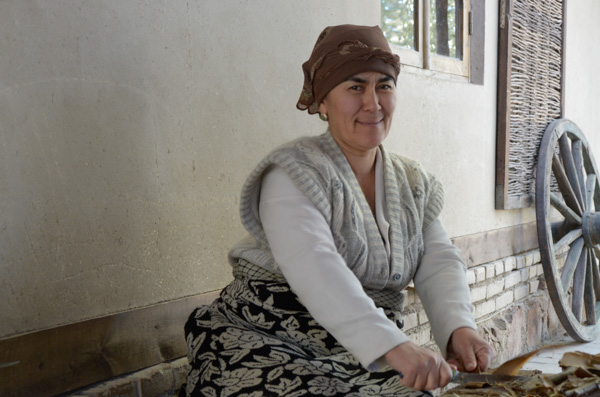 Just before we reached Samarkand we stopped at the Koni Ghil Silk Paper Workshop, where we learned about the process of making paper from mulberry leaves.

Beginning in the 8th century, Samarkand was the major center outside China for making paper. This traditional handicraft declined after the 19th century Russian conquest and it has only been since 1991 that it has revived. Check the article at the link above to find out more.

Click for additional pictures and discussion about the workshop. 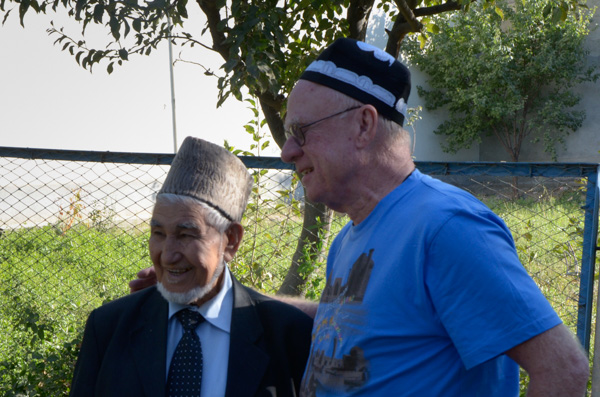 Another stop in our introduction to traditional Samarkand crafts was the Samarkand Bukhara Silk Carpets Joint Venture.

This was founded after independence by Haji Mohammad Ewaz Badghisi, who is shown here with Jim Massie from our group. The company is family operated and has received recognition from UNESCO.

Click for additional pictures and discussion about the workshop. 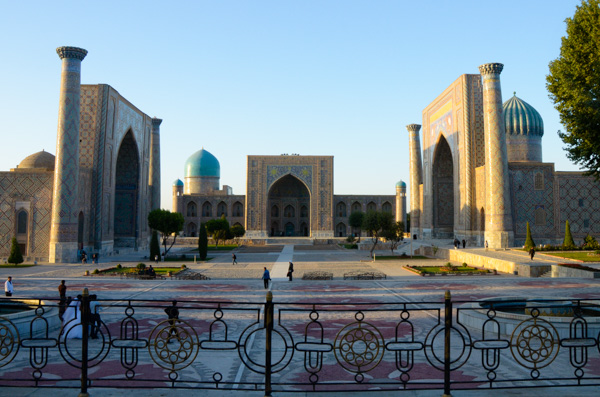 Our first stop on our arrival in Samarkand proper was the fabulous Registan. Click for additional pictures and description of this amazing site.

(It's hard to see them behind the filigreed fence, but there was yet another newly-wed couple who had arrived for pictures with their wedding party.)

After a brief stop we proceeded to our nearby hotel for the evening. 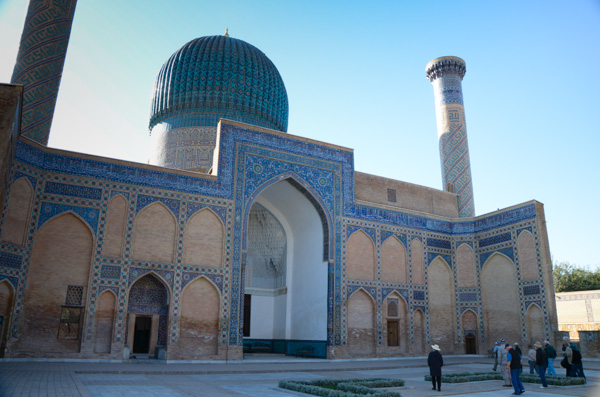 After breakfast the following day we gathered for our official city tour. The first stop was the early 15th century Gur Amir mausoleum – the burial place of Tamerlane, some of his descendants and his spiritual advisor.

As with most of what we saw, this has been largely restored. 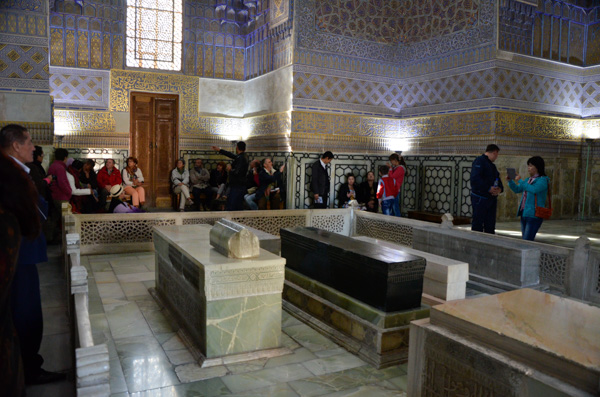 The interior of the mausoleum contains these cenotaphs. The dark one in the center represents Tamerlane. The actual tombs are located on a lower level. 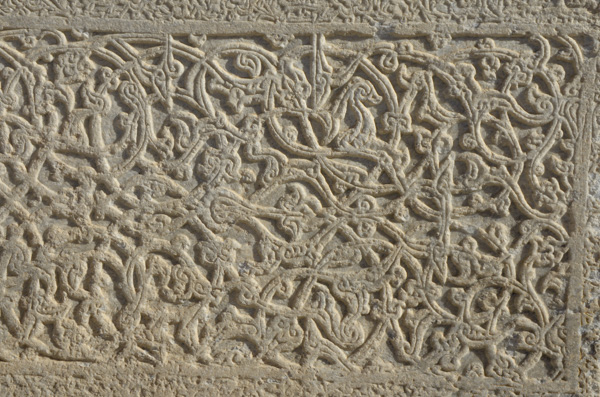 Some traditions hold that the Irish and Scottish peoples originated from the Scythians of Central Asia, perhaps by way of Spain.

DNA analysis shows some links between the modern Irish populations and the European steppes, but it's complicated.

I thought this carved panel at Gur Amir looks very much like Celtic art found in Scotland & Ireland. 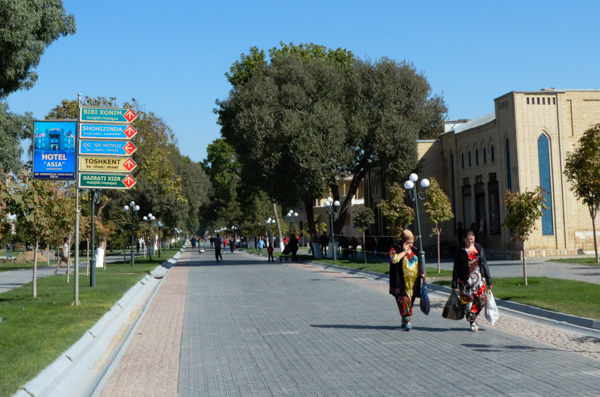 Our next stop was the Bibi Khanym Mosque. Bibi Khanym (or Khanum) was Tamerlane's wife and she ordered the mosque constructed in honor of his Indian campaign. At one time it was the largest mosque in Islam.

The mosque is reached by this pedestrian mall, Tashkent Street, which stretches from the Registan to the bazaar adjacent to the mosque. There are also mini shuttle buses to convey those who cannot make the walk.

High-end and artisan shops line the street, but we weren't on a shopping expedition. Click to see pictures of the mosque and bazaar. 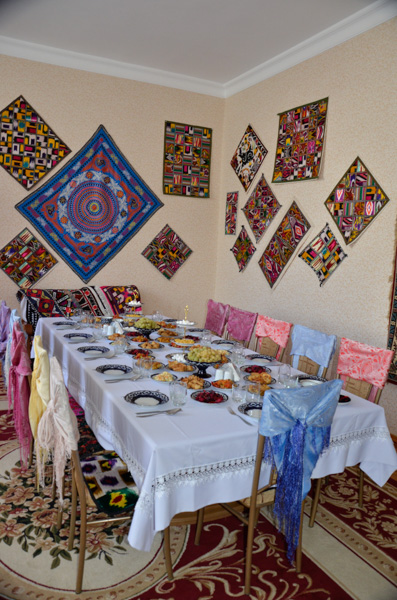 All of the above adventures took only the morning. Almost every day Jama gave us the option of sticking with the published program or leaving a little early so that we could include something more. Of course we always chose more!

On most days he would then give us the option of going back to the hotel on schedule for some free time or including a little something more. Of course we (almost) always chose to go for more!

No wonder we were always tired.

While in Samarkand we had lunch in this private home. The family supplements their income by hosting tourists. We walked down a narrow street, through a nondescript doorway, and into a courtyard with a fountain and singing pet birds. The upstairs dining area had two tables elegantly set with delicious appetizers, cooked salads, and traditional bread waiting for us. The soup, main course and desserts came out later.

No one went hungry on this trip! 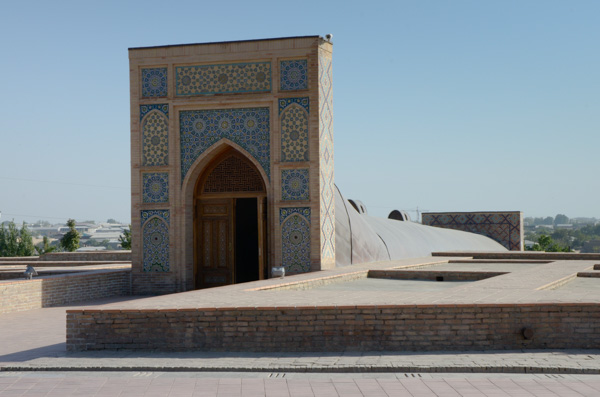 After lunch we visited the partially restored Ulugh Beg observatory. He constructed a massive instrument on a hill overlooking the city. It fell into disuse not long after his death.

All that remains is part of the arc of the instrument protected by this reconstructed building.

There is also a museum at the site. 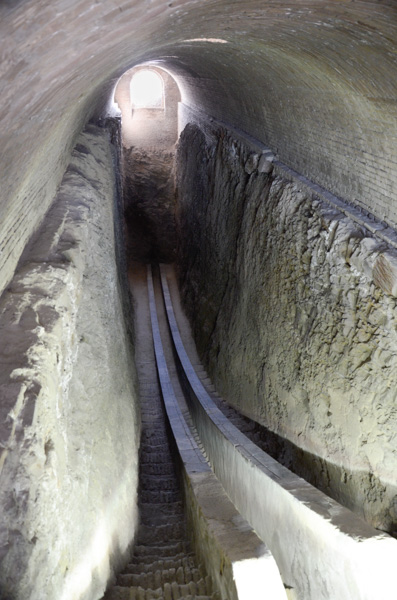 Part of the "meridian arc" track that housed the instrument was carved out of the rock. A three-story brick building housed the above-ground extension. That structure disappeared long ago.

Ulugh Beg used his observatory to, among other things, construct a star chart that was used worldwide for navigation into the 17th century. He also accurately calculated the length of the year and the tilt of the earth's axis.

As an astronomer Ulugh Beg ranks with Copernicus and Tycho Brahe. 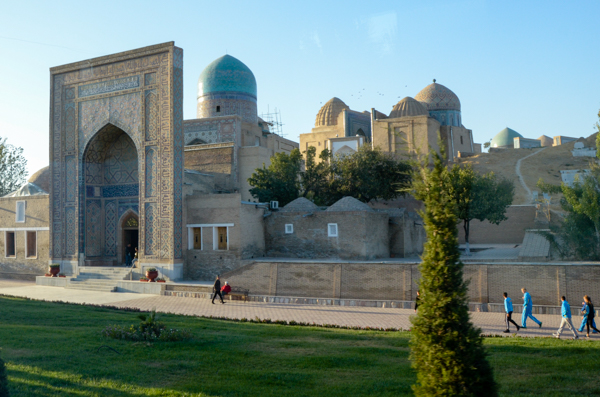 After visiting the observatory we then drove to the Shah-i Zinda Complex. This collection of ancient mausoleums and shrines is surrounded by a modern cemetery.

The name means "living king" and refers to a cousin of the Prophet Mohammed, Kusan Ibn Abbas, who is buried here.

The main gateway was commissioned by Ulugh Beg. 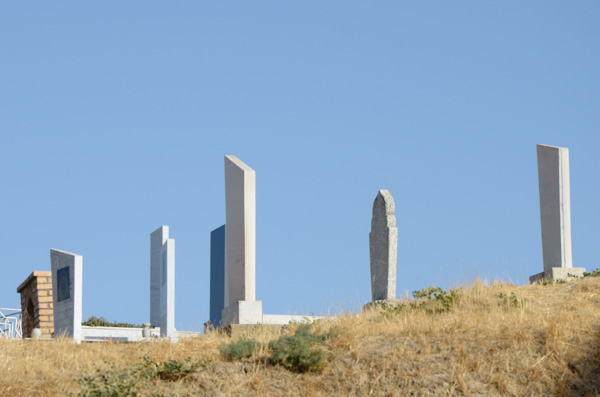 I know that we were here to see the old buildings with their ornate decoration, but I was getting overloaded with gorgeous blue domes.

The spare, angular modern monuments had fascinated me since we arrived in Central Asia. 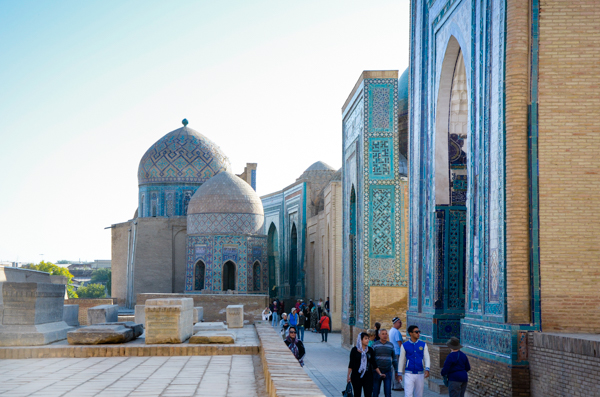 We went through the monumental gate and up a series of stairs. According to tradition visitors must count the number of steps both going up and going down. If there is a discrepancy, it's curtains for you! (I counted 40 both ways.)

Many of the tombs are for female members of Tamerlane's family. 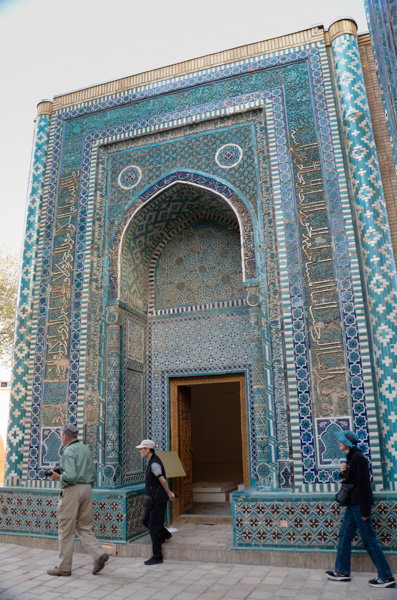 Kusan Ibn Abbas is buried in a shrine entered via this door. The name of the necropolis is from the legend that, after he was killed, he went through a deep well into paradise where he still lives. 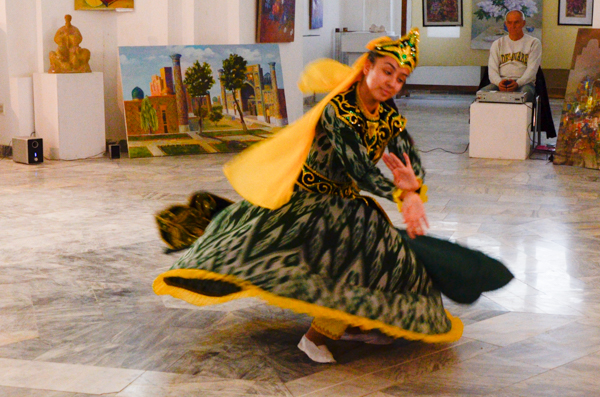 After visiting Shah-i-Zinda we were treated to a performance of traditional dances by a troupe of skilled young dancers. A couple of examples.... 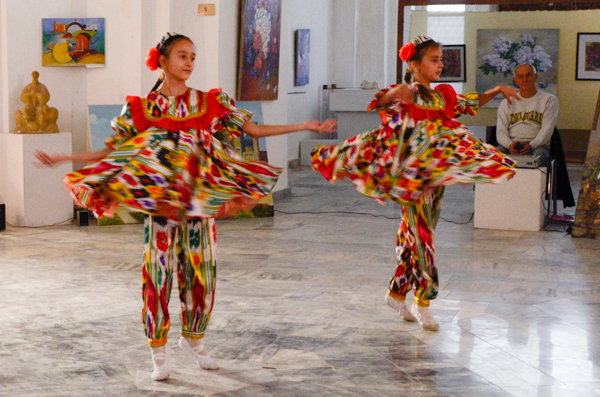 The gentleman with the University of Delaware sweatshirt in the background was running the sound system. 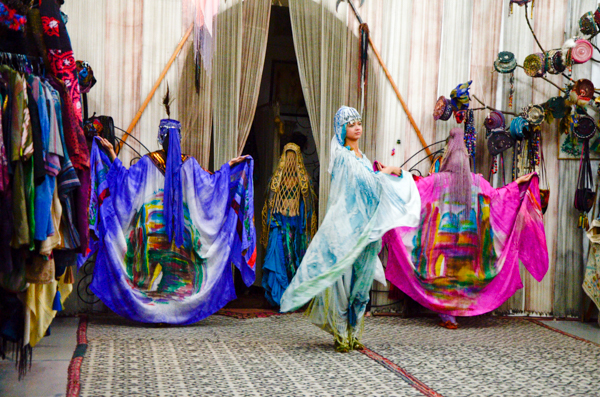 After supper we visited the workshop of a local fashion designer and artist for tea and a display of their creations. The designs are hand-painted on silk.

Many of our group enjoyed shopping afterwards and some bought unique clothing to take home. 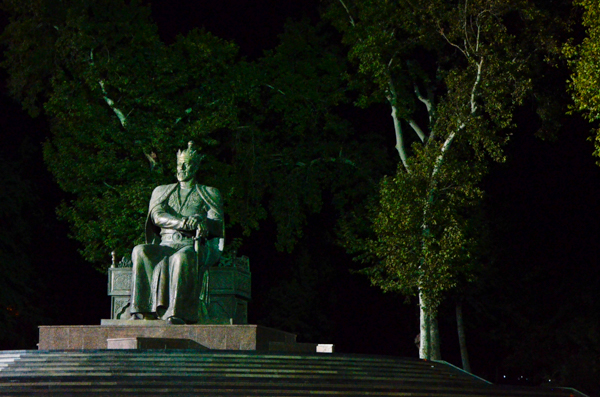 I had been wanting to get a picture of this monument to Tamerlane.

It is a busy intersection and we could not slow down as we whizzed by during the day. On the way home that evening, the bus stopped for pictures.

The next morning we bade farewell to Samarkand and departed for Bukhara, the next stop on our adventure.