In the 15th century an ancient bazaar stretched along what is now the pedestrian mall from the Bibi Khanym mosque to the Registan. President Calvin Coolidge once said about the US: "After all, the chief business of the American people is business. They are profoundly concerned with producing, buying, selling, investing and prospering in the world." A similar statement can be made about the culture of Central Asia. Over the millennia it has been centered on commerce and trade and that is still true.

The modern mall leads to the mosque and an adjoining market. 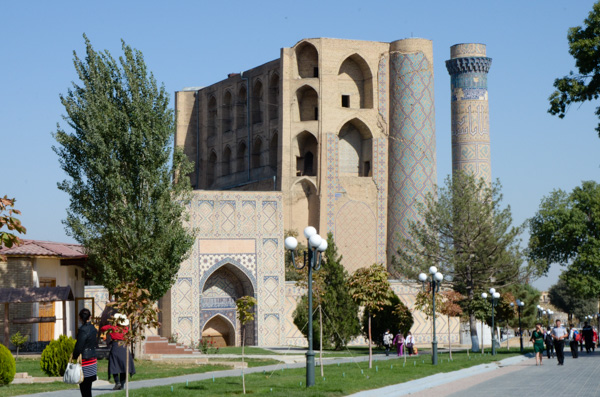 The backside of the enormous gateway is the first image we see of the mosque as we approach from Tashkent Street. There is a large courtyard behind the main gate, which is flanked by two iwans. The mosque itself is opposite the main gate.

As we near the main gate, the dome of the mosque comes into view. As was often the case on this trip the scale of the architecture and the constrained places in which it resides, prevented me from getting all-inclusive pictures, even with my wide-angle lens.

Moreover limited time (and tiredness) kept me from spending the all the time I might have done scrambling around for the best view. 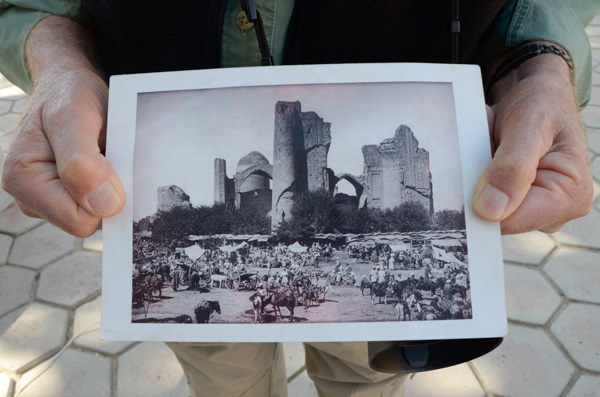 The facility pushed the limit of contemporary construction techniques and soon began to crumble. A late 19th century earthquake dealt the coup-de-grâce, but restoration commenced in the mid-20th century and continues. Our guide showed us a picture of how it looked after the quake. The bazaar is in the foreground.

We weren't the only tourists making the rounds in Samarkand that day. We ran into this group of Uzbek ladies who were getting a friend to take their pictures. After much giggling and gesticulation, the ladies of our group joined them for a joint portrait at the great gate into the mosque. 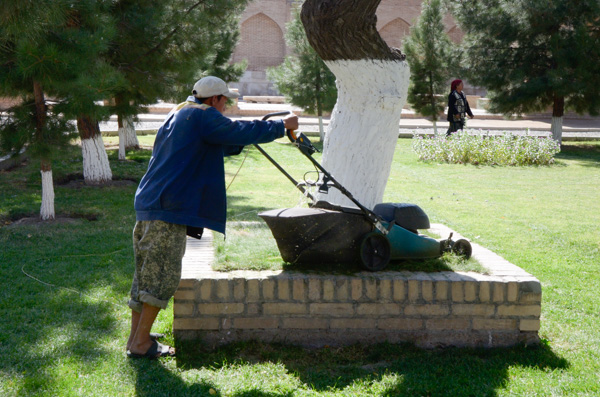 At one time the interior courtyard would have been paved or simply dry sand, but it is now a park. This is trimming grass around the trees the hard way.

Everywhere we went we saw people cleaning and maintaining the streets and gardens. I chauvinistically expected to see everything run-down.

Also throughout Central Asia we saw tree trunks painted white like this. It is not uncommon in parts of the US either and is believed to provide protection from insects. Plus it becomes a decorative tradition.

The northern iwan. Although it is being restored it is not structurally sound and tourists may not enter. That is also true for the mosque itself.

This enormous stand once held the ancient Quran we saw in Tashkent. Its scale gives a better idea of the size of that book! 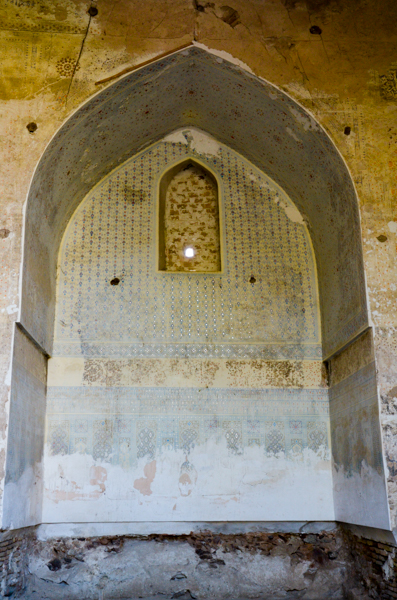 The iwan on the southern side of the courtyard is stabilized but not restored. The interior decoration is stenciled rather than tiled. Although it is faded and discolored, some of the designs and once-brilliant colors show through. 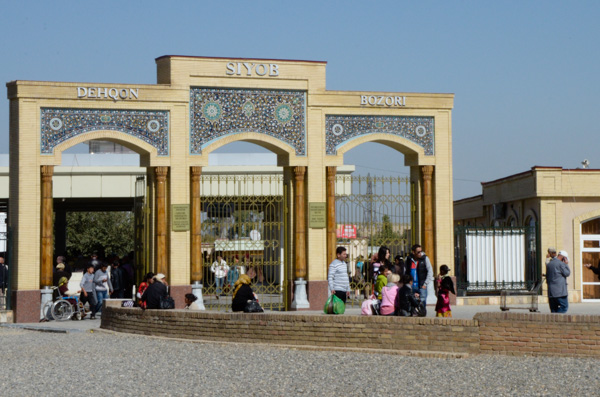 The central market is adjacent to the mosque. The buildings may be new, but the market is ancient.

The market is a bustling location and there are numerous beggars and free-lance folks who sell goods of dubious quality. Our guides called them Gypsies and said that the society has made many attempts to settle and educate them with little success. There now is now a neighborhood where they live in established housing and this is an improvement over former hovels.

As is usually the case with Gypsies, the situation may be more complicated than that. As I update these pages in 2019, I am disappointed that the research paper I had found shortly after our trip has disappeared from the WWW. It indicated that misperceptions about the Lyuli are common – even within their own community. Or perhaps they snowed the researcher like the Samoans snowed Margaret Mead?

As was always the case in the markets we visited, everything was clean and fresh. This area specialized in candies and sweet cakes.

Theft does not appear to be at all a problem since stands that weren't occupied simply had a cloth thrown over their goods.

Jama told us that a criminal offense is the end of anyone's chances for advancement. Accusations of prison brutality and torture are pervasive. 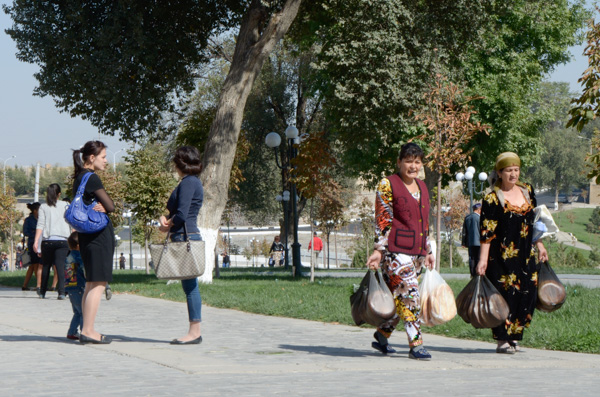 In our ignorance, we expected to see only modest traditional dress in our travels. The truth was more varied. The majority of women in Uzbekistan wore traditional dress, but a sizable minority was in western dress.

The traditional dresses with their matching trousers were very sparkly and full of "bling." I wanted to get one, but Jama said they were custom-tailored either at home or in a shop. Two of the ladies in our group did take the time to have dresses made, but I never got around to it.

Almost all of the men wore western styles. 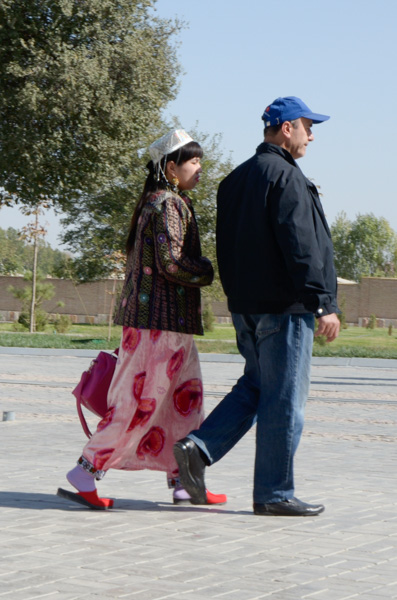 During our travels we saw numerous weddings with the bride in a western style white dress (rented for the occasion). Young brides, however, often dress in a traditional festive style for the first few months of their marriage.

This young woman has on the "bride's hat." The man with her looked considerably older. I wondered if he was her husband or some other male relative. 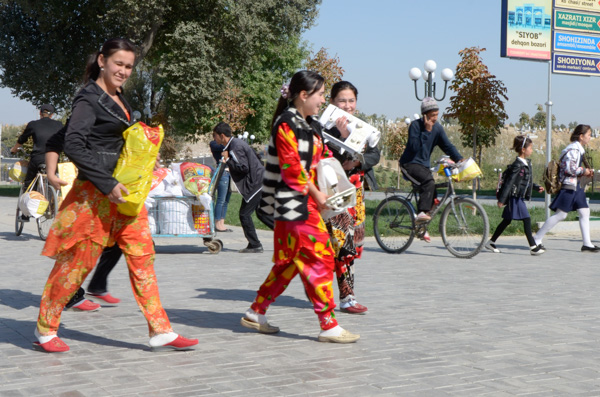 All kinds of goods are sold in the market. These young women are proudly carrying home their new purchases: sewing machines!