On the Silk Road in Central Asia
Samarkand – Registan

Registan means "sandy place." In former days the central square was indeed sand. As I recall from our reading, most large Central Asian cities had a "registan" where merchants set up markets and exchanged gossip. In fact there was once a blog covering Central Asian happenings called Registan.net. Since one of the human rights concerns with Uzbekistan is about freedom of the press, it wasn't surprising that the datelines seemed to be pseudonyms. When I updated this page in 2019, the web address had disappeared. Perhaps the entire enterprise fell victim to censorship.

Madrasas, schools for religious scholars, surround the square. Nowadays in a time of violent Islamist fundamentalism, the madrasa has a reputation as a crucible of terrorism. According to our pre-trip reading however, the madrasa, as a residential place of instruction in all kinds of subjects, including but not limited to the tenets of the Muslim religion, was the inspiration for the European university system. 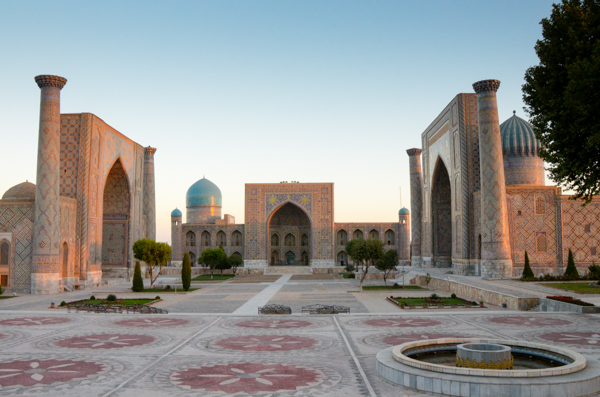 Jama highly recommended visiting the site at dawn to see the changing light. Since I was still half on US time, I woke up early the next morning and scrambled out. Our hotel was in easy walking distance.

He had also told us that the far minaret on the left was accessible to tourists and that the security guard, who spoke English, was happy to escort visitors up (and down) the steep, dark and crumbling internal stairway – for a small consideration. My knees weren't up for it, but one couple in our group did make the climb and survived. 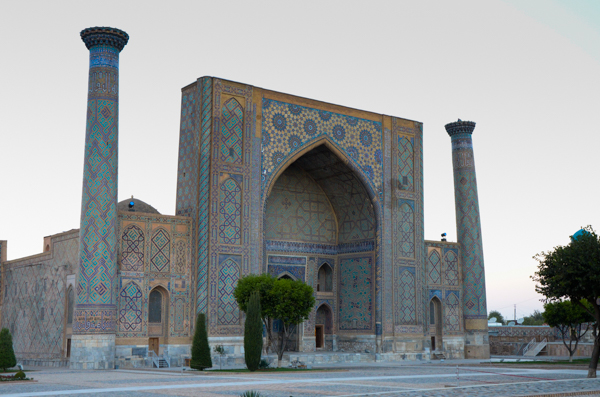 Tamerlane's grandson, the great mathematician and astronomer Ulugh Beg founded this madrasa in the 15th century. More on him later.

The right-most minaret is the one that allows visitors. The little dot at its top is an intrepid tourist. If it looks like it is leaning – it is. It has been straightened and the foundation reinforced, however, so it isn't in danger of falling. 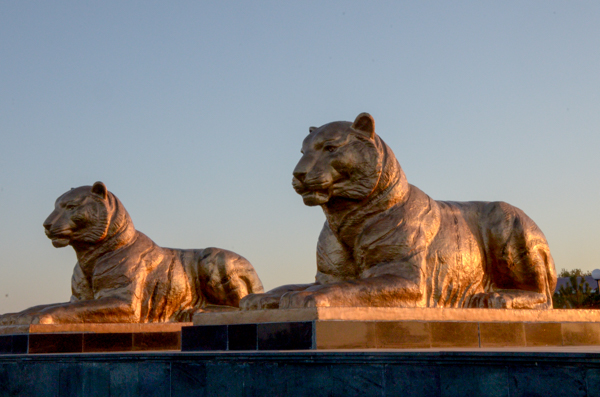 In spite of the Islamic ban on representation of people or animals, this pair of lions (or tigers) glowed in the morning sun in a nearby park. 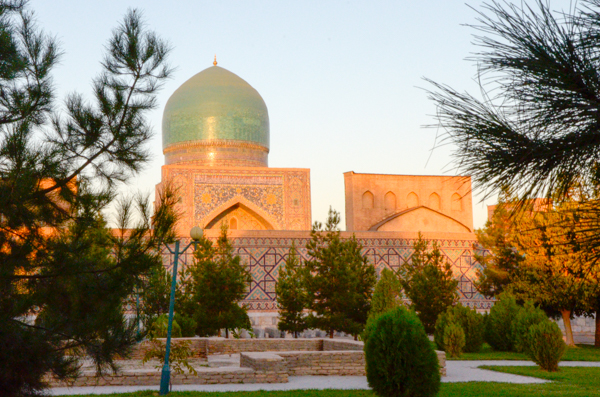 When I first walked between the hotel and the Registan, I saw a group of local women exercising in this park beside the Tilya-Kori Madrasah. Their program appeared similar to Tai-Chi. We waved at each other, but it seemed rude to take their pictures.

By the time I returned, they had gone.

I was not afraid to be out walking by myself in the pre-dawn city. We felt safe wherever and whenever. The crime rate is very low -- perhaps due to draconian punishment for offenders. 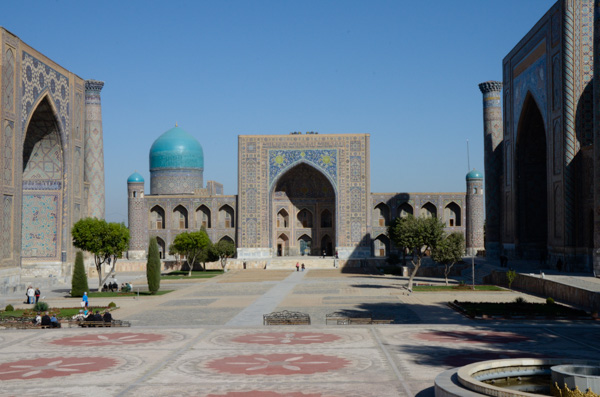 Later that day we returned with our city guide for the details of the various structures. Here is the square at midday, more or less.

On the left is the original building, the Ulugh Beg Madrasa. The center building is the 17th century Tillya Kori Madrasa. On the right is the Sher-Dor Madrasa, also built in the 17th century. 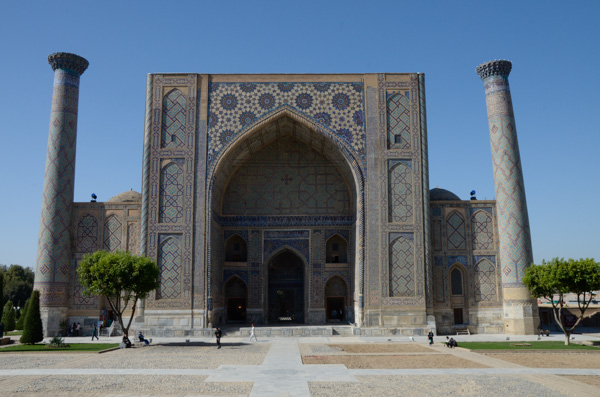 Tamerlane's grandson Ulugh Beg, was a noted scientist and mathematician. He founded this madrasa for instruction in religion and other subjects. This building is the remaining piece of a much larger plan. 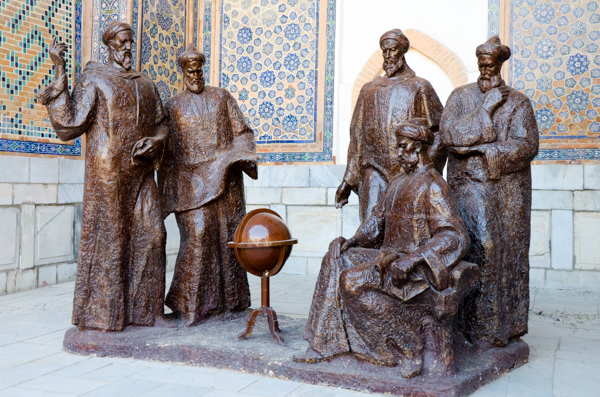 This monument commemorates the 600th anniversary of Ulugh Beg (second from the left). He is accompanied by other noted scientists of the time and place. 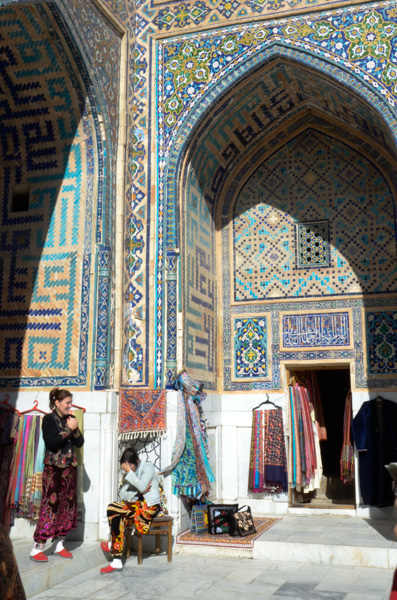 None of the madrasas that we visited were still schools. Most of them were bazaars with shops in the individual rooms.

These shops were in one corner of the Ulugh Beg madrasa.

The Tillya Kari Madrasa is the newest of the buildings within the complex, although only by a few decades. The name comes from the golden decoration.

The interior of the mosque adjacent to the school is spectacular. The mihrab. 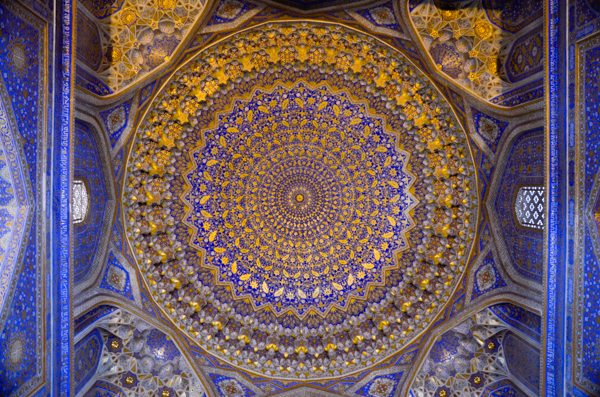 I confess – for this picture of the dome I lay down on the floor. (I wasn't the only one!) 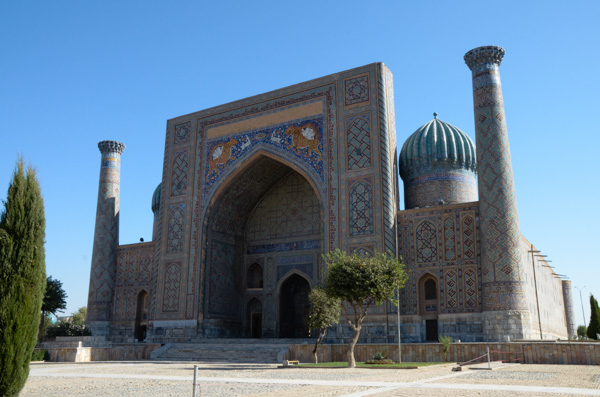 The 17th century Sher-Dor Madrasah is noted for the lions or tigers in the panels above the arch. The name means "lion." 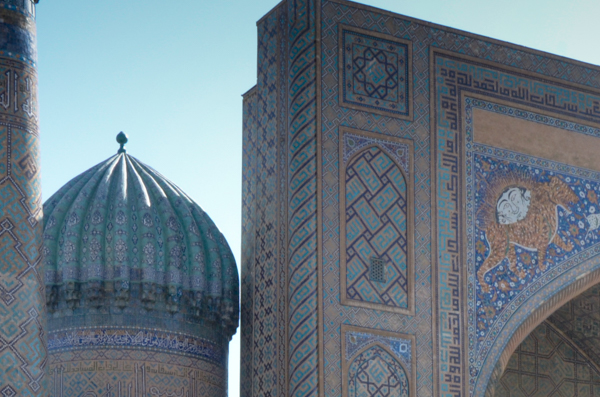 A close up that shows one of the lions and a mysterious face peering over its back. 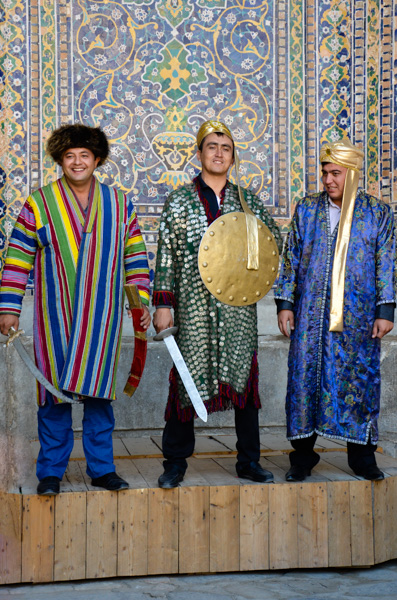 Inside the Sher-Dor, photographers had a concession where folks could dress up in traditional clothes to get their picture taken.

These guys are having a grand time channeling Mongol conquerors. 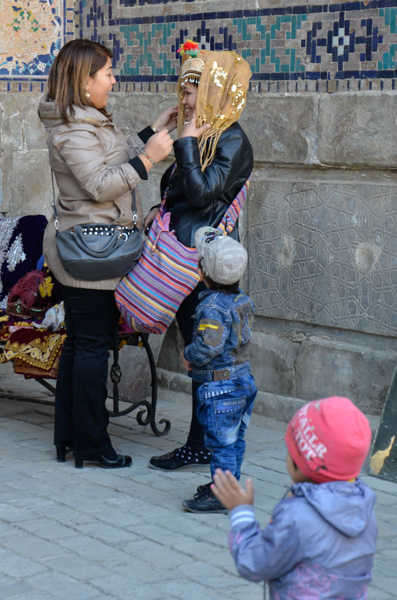 This young mom is reclaiming her inner princess. 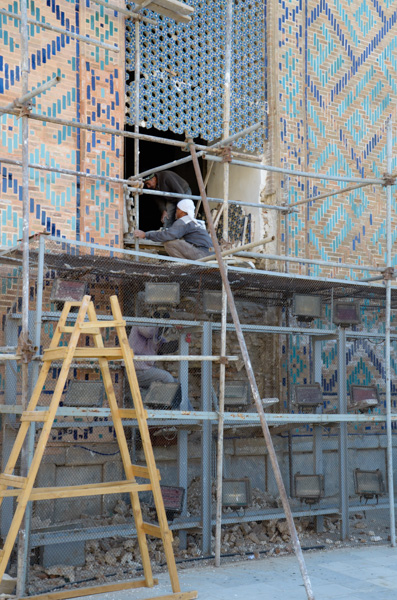 Most of the buildings that we saw had been restored – some several times. The Registan buildings are still being restored, or maintained depending on your point of view.

These workmen are repairing the masonry screen and replacing some of the exterior tile work.

We were told that under UNESCO guidelines reconstructing decorative patterns should only be done if scholars could accurately determine what had originally been used.