Our trip began with three days in Barcelona, Spain. We flew from Washington to Barcelona via Munich. The first excitement was an equipment failure on the plane out of Dulles airport. We were thankful that the problem was discovered while the plane was still at the gate and that a repair was possible in a reasonably short time. Overall delay was over an hour, but we had just enough time in Munich to make our connection to Barcelona.

Our hotel in Barcelona, NH Barcelona Centro (was called Duc de la Victoria), was very nice and centrally located. We could walk to many of the sights and the subway was only a couple of blocks away. 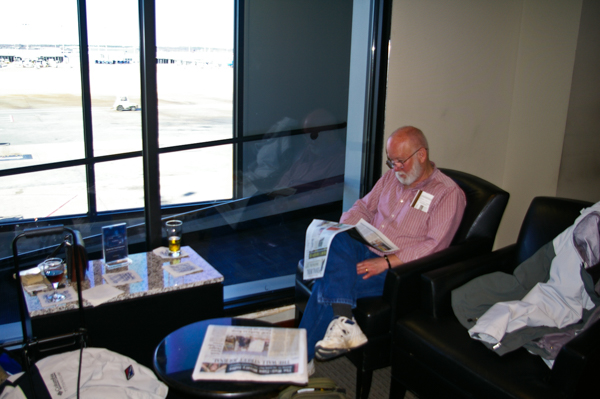 Years ago when Jim was doing a lot of travel with USGS, he purchased a lifetime membership in the Continental "President's Club." What with subsequent mergers, we now have lifetime access to the United equivalent. Since we had to be at the airport well before our flight to Barcelona, we were happy to have a comfortable place to wait – not to mention the free wine, beer & snacks. What a great investment that was! 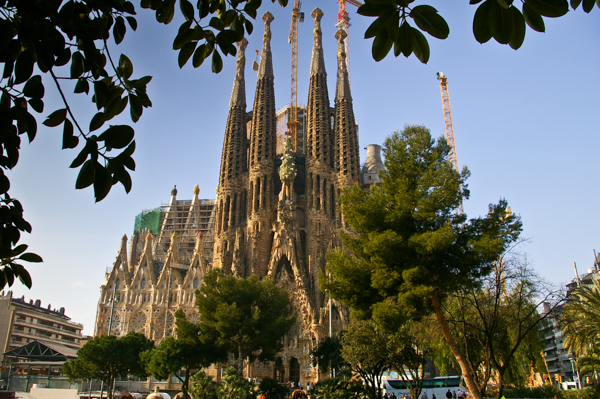 The day after our arrival in Barcelona we had a half-day bus tour to give us an orientation to the city – particularly the parts that were not within easy walking distance. The first stop was the glorious Sagrada Familia church, which was begun in the latter part of the 19th century and is still under construction.

The construction of this edifice was supervised for many years by the architect Antoni Gaudi. We saw quite a few (but not enough) of his works and they were fabulous. In order to keep these web pages to a reasonable size for downloading, I've moved most of my pictures of the Gaudi locations to a separate page. Follow the links to see more. 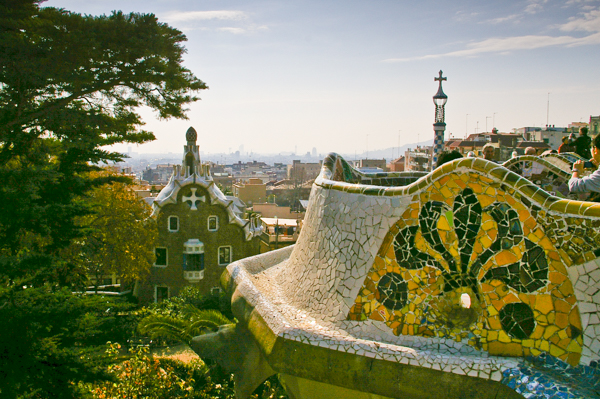 Our next stop was the Parc Guell, planned by Gaudi for his patron, Count Eusebi Guell. The count's goal was a housing development containing up-scale building lots in this healthful neighborhood high above the city. It never was a success as such, however, as only two houses were built – neither designed by Gaudi. The park is currently open to the public.

The terrace overlooks the city of Barcelona. The distant hill that can be seen in the center of picture is Montjuic, which we will be visiting later. 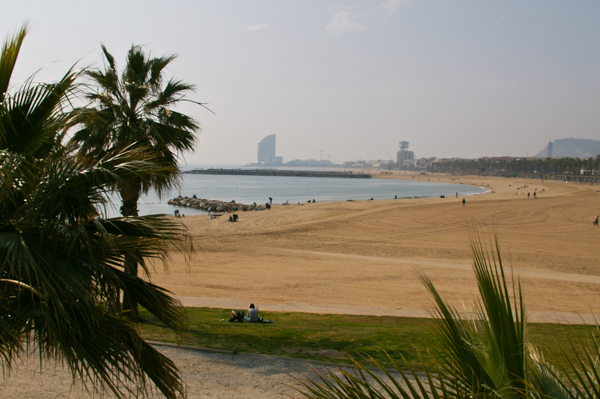 The next stop on our blitz through the city was the waterfront. Barcelona is said to be the largest city in Europe with its own beach. I expect it gets pretty crowded in the summer – somewhat like the lawn at Wolf Trap during a sold-out performance.

The tall, oddly shaped building in the background is a replica of the Burj al Arab hotel in Dubai.

The waterfront sector, called Barceloneta, is where the best seafood restaurants are to be found. We didn't make it there to eat, but those in our group who did were very pleased. The late dinner hour in Spain doesn't suit us so we were forced to make do at the numerous delicious and friendly tapas bars!

Our final tour stop was Montjuic. Jim and I came back the following day on our own to visit the 17th century fortress at the top of the hill, which achieved notoriety during the Spanish Civil War and afterwards. It also made a positive astronomical and metric contribution. Follow the link for more pictures and information.

In addition to the fortress, the current development on the mountain is mostly related to the 1929 World's Fair and the 1992 Olympics.

Bonnie and Eloise are having fun with a sculpture showing a traditional Catalan dance (we were told that pictures here are not just permitted, but mandatory). Jim seems overwhelmed by the hijinks! 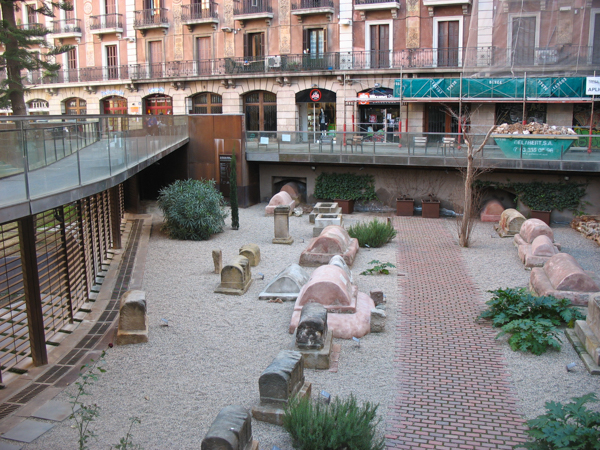 After the morning tour, people scattered in all directions to visit new locations or revisit ones that had piqued their interest. We decided to do some walking around the old quarter near our hotel.

A block away was an excavation of a 2nd century Roman cemetery. Here at home in the US we think something is old when it dates from the 19th century! Europe has a rather different time scale.

Although some of these grave markers have been restored, many are original. The Romans built these markers out of masonry and covered them with stucco. Most had stone plaques with inscriptions. 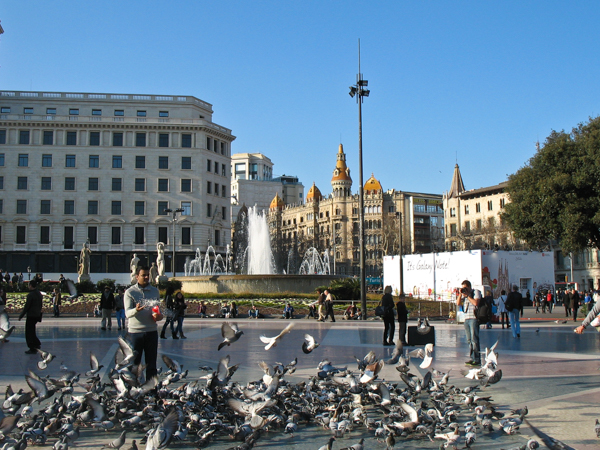 Barcelona is the capital of the autonomous state of Catalunya or Catalonia. One of the official languages, along with Spanish, is Catalan. Although there are many similarities, it is a distinctly different language. (We found that most signs, menus, etc. were in Catalan rather than Spanish.) Catalan is also the official language of Andorra.

Near the hotel was the Plaça Catalunya. This was a popular gathering place for people and pigeons as well as the site of a major transfer point for the Barcelona Metro.

Later in our stay there was a large demonstration, centered on this plaza, against austerity measures being imposed by the government. 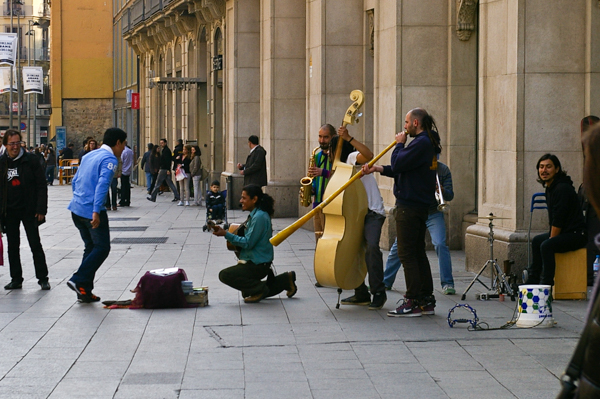 At least in the area of our hotel, Barcelona is a walker's city. On the weekend we were there, the streets were crowded with local families as well as tourists out walking. Many had strollers and babies. Some had grandmother in her wheelchair. The beautiful mild weather encouraged all to get out.

There were buskers of all descriptions: break dancers, mimes, bands, classical instrumentalists – even a lady singing arias.

Many in our group also availed themselves of one of the evening concerts. The week we were there there was a noted flamenco guitarist performing at a church in our area. They said he was fabulous! 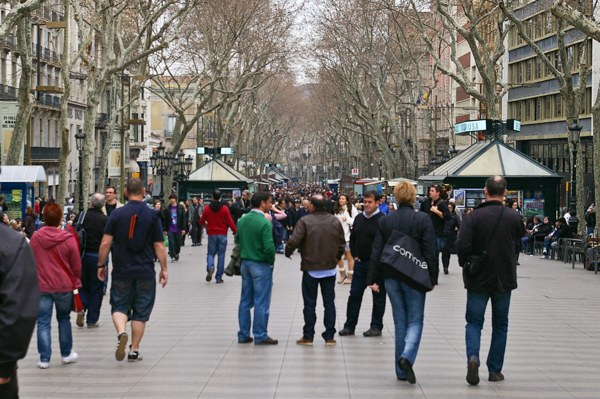 The major place to see and be seen is La Rambla. It is a major thoroughfare as well as a pedestrian mall. Numerous shops and eateries line the street. Not being shoppers or fans of city crowds, we didn't spend a lot of time on La Rambla itself. The tapas bars on the side streets had terrific food at lower prices with less noise and crowding. 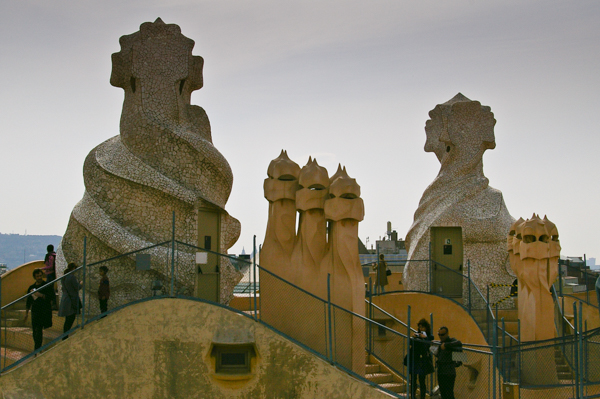 We particularly enjoyed a visit to Gaudi's Casa Milà – also known as La Pedrera. It is a weird and wonderful building designated as a UNESCO World Heritage Site. We braved the subway to get there and found it clean, quick and relatively easy to negotiate. Don't expect a lot of English instructions. Be prepared with your Catalan phrase book. 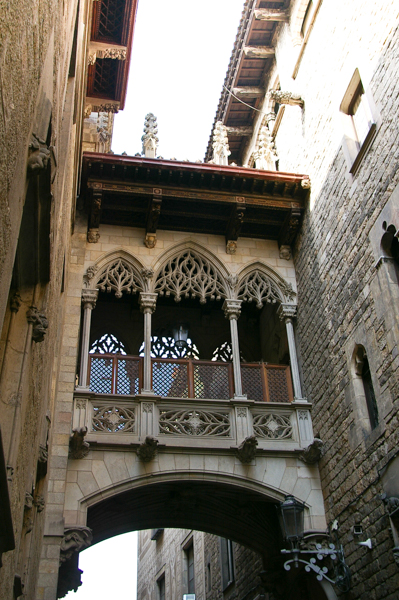 Once off the main streets the roadways were very narrow and twisty – although you always had to be aware of potential traffic.

Several people in our group were dismayed to find that the tour bus was unable to negotiate the streets to provide curbside delivery of luggage. Moreover the hotel did not have bellmen with luggage carts. All the warnings  about being prepared to carry your own bags, which are routinely ignored by most American travelers, are really true. Some who had over-packed had to make multiple three to four block trips to get to the bus stop – even though everyone gave a hand where possible.

The Barcelona cathedral dates in part to the 13th century although it wasn't completed until the 20th century.

We loved the iron work on this tower, which was one of the older ones (I think). This would be an uncomfortable place to walk in a rain storm if all the gargoyles were spurting water. 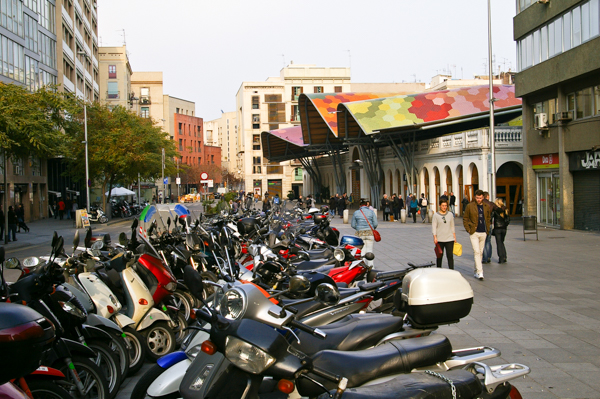 We were also told that Barcelona, in addition to being one of the most densely populated city in Europe, also has the most motor scooters & motor cycles – even more than Rome. We've never been to Rome, but we can attest that there are very many scooters in Barcelona.

The colorful roof in the background covers the 19th century Santa Caterina market building renovated not long ago. This is Sunday and it was closed, so we couldn't visit on this trip. 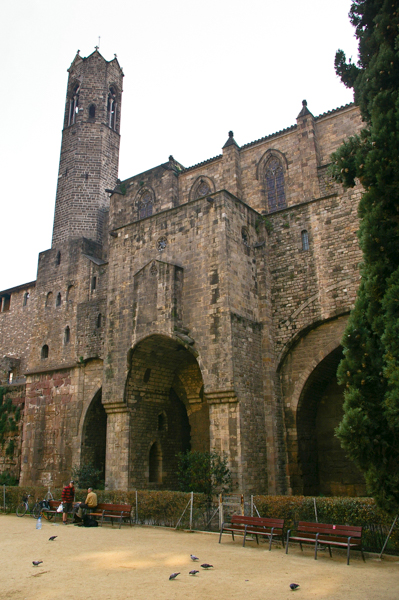 As mentioned above, age is a relative thing. The Cuitat Vella corresponds roughly to the footprint of the original Roman settlement. In most European cities, the old city walls have been torn down, but in many places here they have been preserved in a way. This building at the Plaça Nova incorporates a portion of the original wall and the viaduct that served the city, which can be seen in the multiple layers of arches. This aspect of Barcelona would have deserved at least a day on its own.

We enjoyed Barcelona so much that we returned some years later for an extended visit. There is still much to see.

Early the following morning, we were up and packed and on our way to Andorra by way of Montserrat.