The name Montjuic is pronounced something like MON-joo-ees. It may mean either "Jew Hill" or "Hill of Jupiter." Prior to the reconquista and the expulsion of the Jews in the 15th century, this may have been the location of a Jewish settlement or cemetery. If so, there is no sign of it any more. 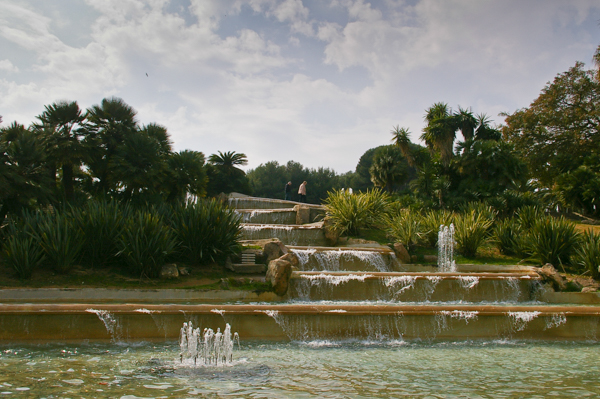 On our first drive-by of Mounjuic we stopped briefly at the overlook where this fountain was located. The next day Jim & I returned to the park to explore the fortress at its summit. We took the subway, which connected to a funicular, which gave access to a teleferic that took us to the top.

After exploring the fortress, we walked down the hill to the funicular station to return to the center city.

This was a lovely large urban park. 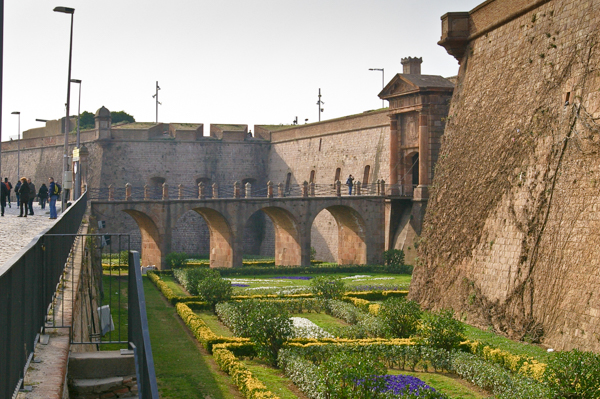 The original fort on this site was constructed in the 17th century. The current structure dates from the mid to late 18th century. It takes up most of the summit of the hill, but the major part, shown here, is more compact.

One might think that the fort would be intended to DEFEND the city, but in practice it seems to have been used primarily AGAINST the city to quell uprisings of various sorts.

It served until 1960 as a military prison. Many dissidents were executed here. 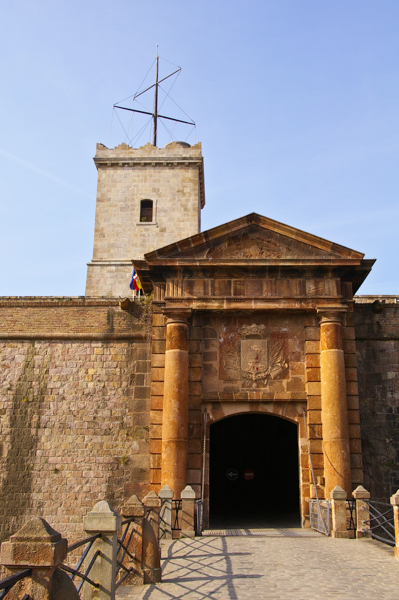 The tower over the entrance has a global significance. It was the location where Pierre-François-André Méchain made the southernmost measurement used to establish the length of the meter, the basis of the metric system.

The story behind this work is one that we had not known before and probably would not yet know had we not seen a small plaque on the tower. Subsequent research led to the links above. It is fascinating and full of intrigue! 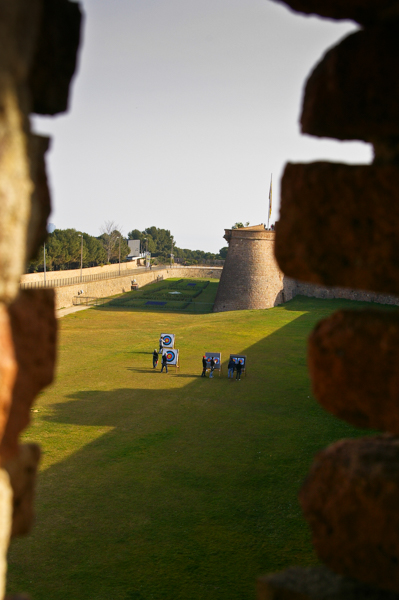 At corners of the fortress are protected observation posts that used to overlook the "moat" surrounding the inner fortress. While we were there an archery club was practicing (or competing – we couldn't tell). It was easy to imagine that the archers were attacking forces. 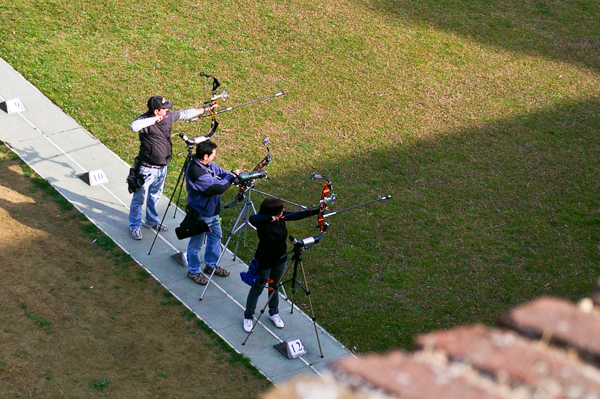 These are not your grandfather's long-bows!

High-tech has definitely reached archery. The poor targets didn't have a chance! 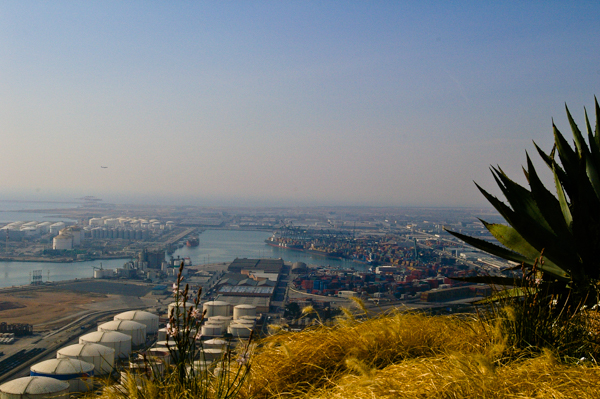 From the top of Montjuic we got a good view of part of the Barcelona harbor. It is in the top ten busiest ports in Europe and is the largest cruise port in Europe with over 2 million passengers in 2010. Several of our PVS travelers were looking forward to returning to Barcelona on cruises later in the year.

After visiting the fortress, we discovered that we had bought one-way tickets on the teleferic. People will tell you that everywhere in Europe you find signs in English and people who can speak English. Not true! Although many signs are in English, not all are. In Barcelona we didn't even see that many signs in Spanish, and we had forgotten to bring our Catalan phrase book.

Not to worry, the walk down to the funicular was through a garden and many of the local people were out enjoying the lovely weather. We saw exercise nuts running up and down the stairs. We spent several minutes watching parents and children play on a two-story slide (although tempted, we didn't hop on to save steps). This flamenco dancer was only one of many statues throughout the park.

Although there were numerous museums located in the park, we were on our way to visit La Pedrera, and didn't have time to stop.

To return to the Barcelona overview page, click on your browser's "back" arrow.