In order to keep these web pages at a reasonable size for downloading, I've separated the details about the various fabulous Gaudí monuments into this separate section. If we get to Barcelona again (we did, in 2014), I hope to spend much more time on the various locations. As it was, we didn't get to even drive by them all and only visited one in depth. 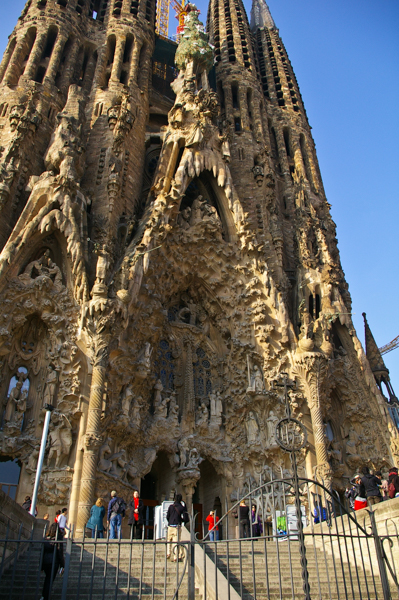 The construction of Sagrada Família, which is still ongoing, was supervised for many years by the architect Antoni Gaudí.

The east or Nativity Facade is part of the Works of Antoni Gaudí World Heritage Site. He was striving for a sand-castle effect and certainly achieved it. The story is that he took mesh bags of wet sand and hung them from his workshop ceiling to observe the shapes that resulted.

The symbolism of the various components of this facade is complex, but all of the figures are associated with the nativity of Jesus.

Gaudí left many models and drawings of the church before his death, but many were destroyed in the Spanish Civil War. This facade, which was completed within ten years of Gaudí's death, is felt to be most faithful to his concept.

Although the edifice is designed to hold, eventually, 15,000 of the faithful, its current designation is as a "minor basilica." It received its consecration as recently as 2010. 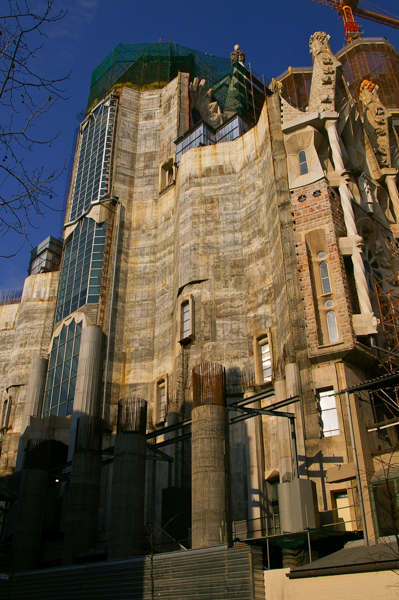 This is the most incomplete of the planned facades: the southern Glory Facade. I very much liked the way that the "bones" of the structure are visible here without any of the ornamentation that will be added later. It shows how substantial the building is.

There was a recent controversy about the construction of a high-speed train tunnel underneath the church and what effect it would have on its structural integrity. Experts disagree. We hope that there will be no ill effect on this amazing building.

The  church and the other Gaudí-designed sites included in this page are all listed as UNESCO World Heritage Sites.

At present (2017) the edifice is scheduled to be completed in time for the centenary of Gaudí's death in 2026. Click for an artist's conception of how it will appear when completed. The Glory Facade was designed to be the main entrance and is facing the viewer in the photo at the link.

This is the west, or Passion Facade. It is much more austere than the eastern facade according to Gaudí's design. I read that it is intended to be skeletal in effect. The sculpture is cubist in design. I wasn't able to get any close-ups on this trip, but in 2014 we spent much more time here. Plus there are a number of close-ups at the link.

Gaudí intended this view to strike fear into the onlooker. I think it meets that goal as it is certainly harsh. There has been some criticism of the facade, which was begun in 1954.

We did not visit the interior of the church, but others who returned the following day to take the tour and the trip up the towers said it was magnificent. Visits to the links above show this.

The interior support structures follow Gaudí's design, which was intended to mirror trees and branches. 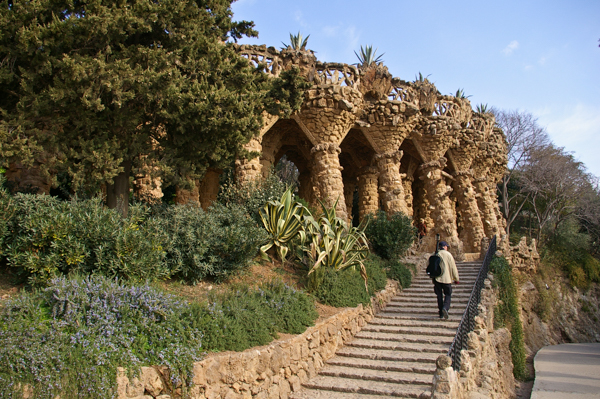 After the visit to the Sagrada Família, we travelled to the Park Guell.

This loggia is reminiscent of a grove of trees. I've read that the tops were intended to resemble bird's nests, which they do. There were certainly numerous pigeons nesting in and around this area.

These clever seats were built into the columns supporting the roof of the loggia. Jim found them quite suitable resting places.

One of the famous features of this park is the serpentine bench surrounding the main terrace. There were only a few spots on the large terrace where I could find enough vacant bench to capture a view of its construction.

The designs are formed by assembling broken ceramics into a mosaic. Gaudí used this effectively here and many other places.

The terrace has a beautiful view overlooking the city of Barcelona.

The building to the left of the terrace and the one that is indicated only by the tower topped by a cross, are the entrance pavilions.

The distant hill that can be seen in the center of picture is Montjuic, which we will be visiting later.

I found the underpinnings of the terrace to be as beautiful as the decorated benches.

The medallions provided additional visual interest to the space underneath the terrace. The entire structure was light and airy. 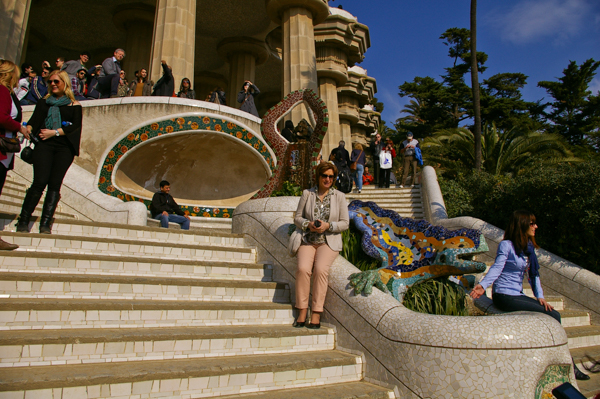 This tessellated lizard or dragon is found at the primary entrance to the park. The people waiting to have their pictures taken with it were not nearly as orderly as at the "southernmost point" buoy at Key West. It took a while before I could get a picture that actually showed most of the lizard.

This sculpture was attacked by vandals in 2007 and heavily damaged, but it has since been restored. 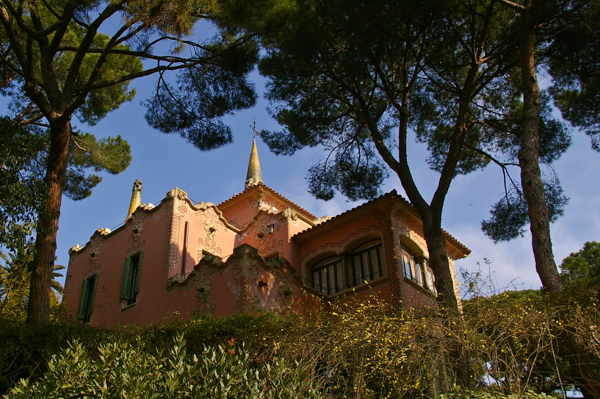 One of the two houses built at the park was purchased by Gaudí. He lived there until he died and it is now a museum. Although he didn't design the house he did make modifications, such as the chimney to the left, and designed much of the furniture. We did not have time to visit the museum. Barcelona merits a much longer stay than three days!

The Casa Milà, also known as La Pedrera (the quarry), is a most amazing structure. Gaudí designed and built it for Pedro Milà as an apartment building. The tour starts at the roof, embellished by these weird structures. They may look fanciful, but all the decorations are functional – either as ventilation systems, chimneys, or stairwell and elevator termini.

Although I don't typically have problems with heights, by the time we had made the circuit of the roof, with its  undulating levels and disorienting features, I was just about crawling on my hands and knees! 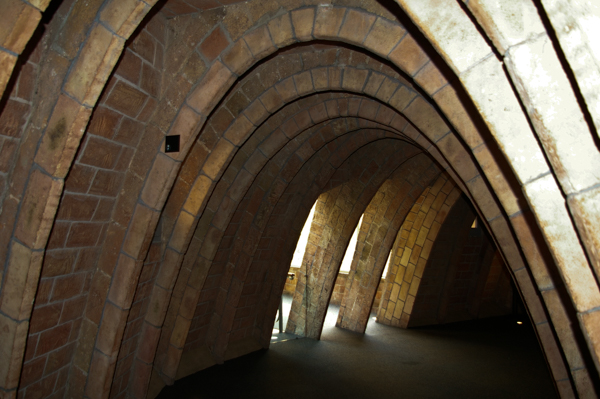 After we crawled down from the roof, the tour continued in the attic space.

The inverted catenary arch was used in this and other buildings designed by Gaudí. Most of the attic space was taken up with exhibits, so it was hard to get a picture of the beautiful structure on its own.

Nevertheless the exhibits were fascinating. 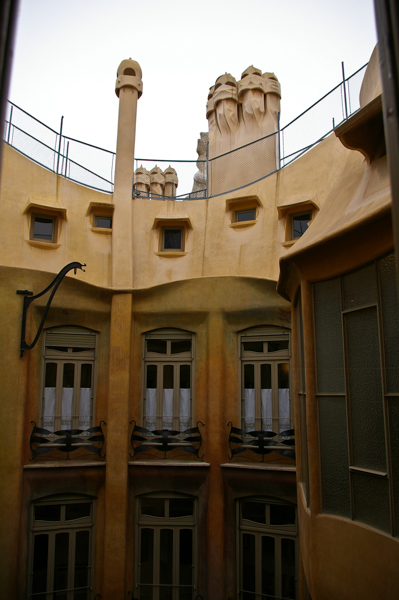 The apartment that is part of the tour is structured around this light well. There are two such wells in the building allowing for at least two apartments on each floor.

The apartment was amazingly commodious for the era in which it was built. It had three bedrooms with extensive additional spaces for living and entertaining as well as support spaces such as the kitchen, sewing room, etc.

In addition to designing the building, Gaudí designed the fittings, such as drawer pulls and door knobs, to ergonomic standards.

The eyebrow windows gave light to the attic space. The arches over the windows below were part of a clever ventilation system governed by transoms. We have no idea what the iron bracket on the left of the picture was designed to hold.

The dining room of the apartment is furnished in Modernisme, the Catalan equivalent of Art Nouveau, furniture. The parquet floors were particularly beautiful.

Note the decorative plaster molding around the door, which was repeated for all the doors and windows. Each of the ceiling lights was surrounded by a decorative ceiling rose or medallion. We were fascinated that the light fixtures seemed much more traditional than the rest of the apartment.

None of the rooms in Casa Milá had square corners. This picture illustrates the undulating lines. The linens and curtains were very traditional but complemented the Modernisme furniture. 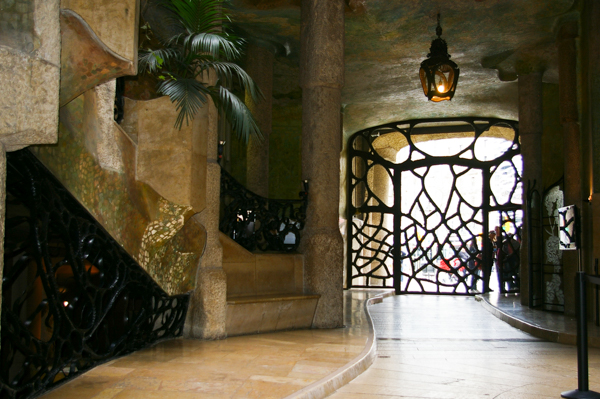 After touring the apartment, we took an elevator down to the lobby area. (Naturally the official exit of the tour was through the gift shop.)

The tracery of the door grille and the banisters illustrates Gaudí's inspiration from nature.

The tour of this building was perhaps the most expensive "add-on" of our trip. It was worth every penny! 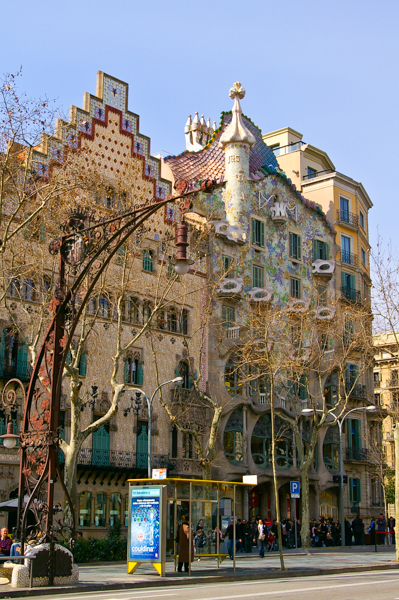 A Gaudí building that we did not visit was the Casa Battló. It was just a couple of blocks down the street from Casa Milá.

Although we didn't get to take the tour, we did enjoy a leisurely meal of tapas across the street. The people watching was super, the food was very good, and the beer was delicious on a mild winter afternoon.

The lampposts on this street were not designed by Gaudí, but they were very lovely. This one doesn't show up very well in the picture, unfortunately.

We didn't get a chance to visit the other Gaudí sites in Barcelona on this trip, but we have definitely put a return visit to this city high on our travel wish list.

To return to our Barcelona overview page, click your browser's "back" button.