The Blue Ridge Ski Council's Eurofest 2012 destination was the tiny principality of Andorra astride the Pyrenees between France and Spain. Potomac Valley Skiers (PVS), of which Jim and I are long-term members (our honeymoon in 1977 was on a PVS trip to Austria and Italy), sent a contingent of 40. Not all planned to ski. The trip included, in addition to a three-day stay in Barcelona, day trips to Carcassonne & Toulouse in France, and an optional three-day stay in Madrid in addition to the opportunity to explore Andorra itself.

I skied three days while Jim explored Andorra la Vella, the capital city. Our hotel, the Holiday Inn (!), was in walking distance of downtown and several bus lines providing access to other towns & villages. One day we took an extension to Carcassonne and one afternoon we took the Andorra Tourist bus tour of the province. At other times we explored using the city bus lines. 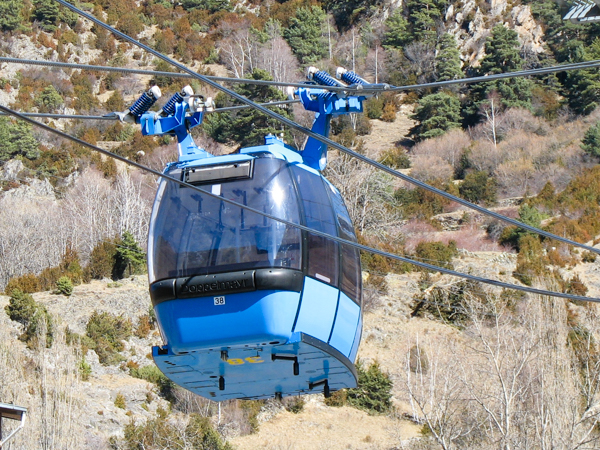 As is common in Europe, the ski area is high above the mountain villages and reached by a gondola. The Andorran gondola from Encamp with its two cables is unique in my experience. This made for a very stable ride and may be necessary with the strong winds that we encountered. The gondolas were luxurious with bench seating and hangers for skis. Plus there was an escalator from the street level to the gondola level.

I elected to rent skis at the top of the gondola, which worked out quite well. I got decent skis and didn't have to haul my own around throughout the trip or pay the excess baggage charges. I was able to leave my boots at the rental shop where they were kept nice and warm overnight.

Check out my ski pictures.

One afternoon Jim & I walked around what remains of the old town of Andorra la Vella. One salient fact of Andorra: nothing is flat. The recommended way to get from the Holiday Inn to the main street of town was to walk a couple of blocks to the municipal building and take the elevator up five stories. That put you onto the main plaza where you could look over the railing and see the roof of the Holiday Inn.

Adjacent to the plaza was the church of St. Steven. Parts of the church are very old, but most of it is quite new. In front is this statue of Joan Benlloch, the Bishop of Urgell in the early 20th century. Andorra is constituted as a co-principality. Although it is a parliamentary democracy, there are two titular princes: the Bishop of Urgell in Spain, and the leader of France, at the time of our visit the president, Nicolas Sarkozy. Bishop Benlloch wrote the Andorran national anthem. He eventually became a cardinal.

To learn more about this unique form of government, and how it came about, check out the Andorra information published by the US State Department. 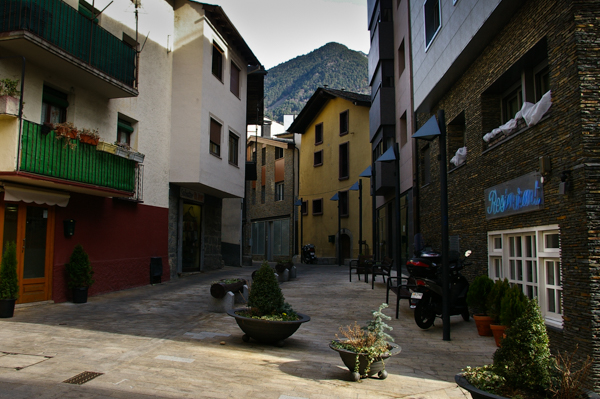 A typical side street and plaza in Andorra la Vella. 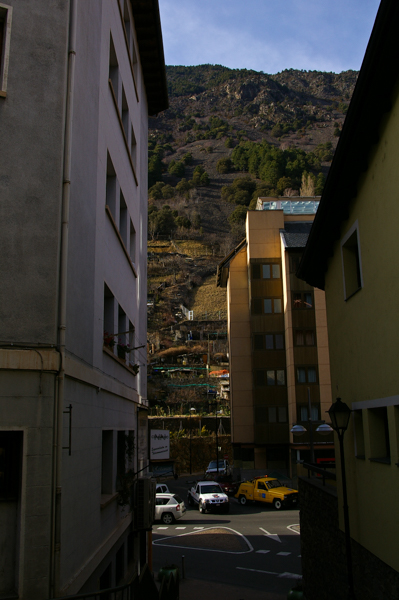 At the edge of the densely populated city is a small section of garden terraces. On the other side of that is mountain. This was a very typical sight in the Andorran towns. 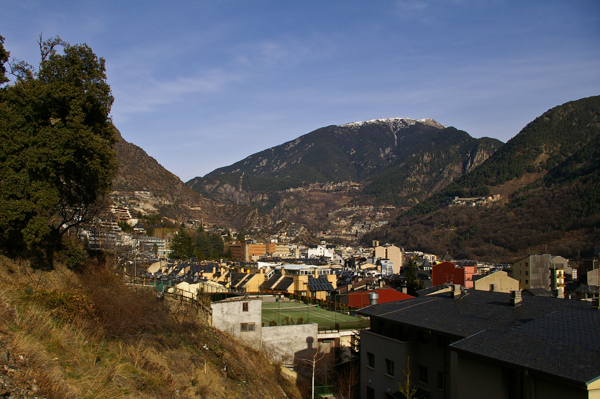 We worked our way over to the garden area shown above. A very steep and winding path led beyond the buildings. The view up the valley is toward Encamp, where we caught the gondola to the ski area.

Snow was limited to the highlands. In the valley the weather is mild without the ferocious wind. 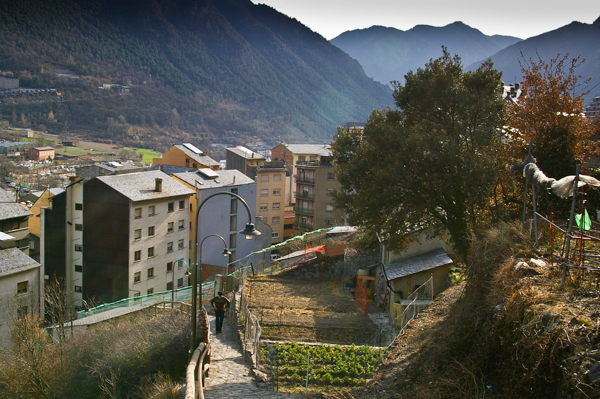 The view down the valley over the garden terraces. Urban farmers reared chickens as well as vegetables in these little plots.

The major agricultural product of Andorra is tobacco! 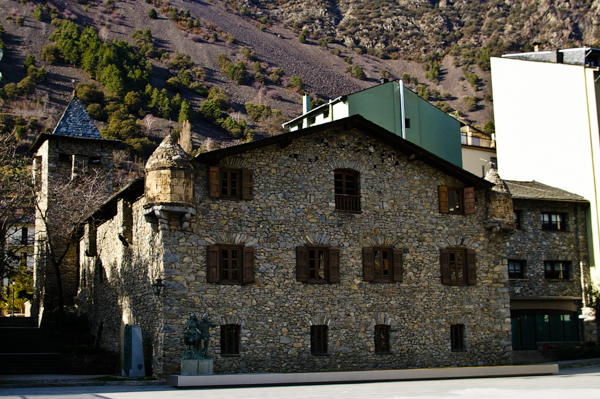 The Casa de la Vall is the home of Europe's smallest parliament. The building dates from the 16th century, when it was built as a private residence. The General Council, the predecessor of the parliament, acquired it in the early 18th century.

We had signed up for a day trip to Carcassonne in France. As it happened, that was the day that it snowed -- heavily. The morning trip over the mountains was harrowing. This picture was taken in the afternoon as we returned. In the morning we could barely see out the bus windows!

Click on the link above to see the pictures from our expedition. 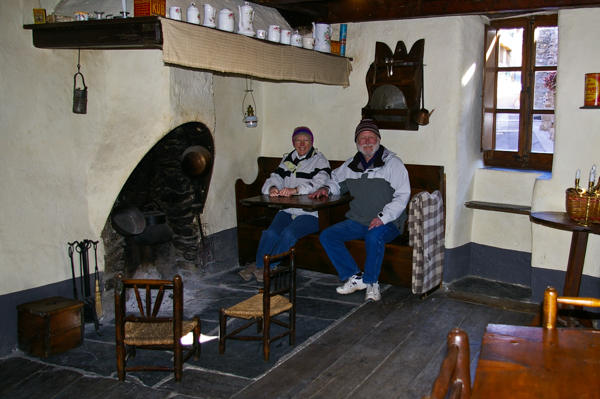 One morning Jim and I took the ski bus up to Encamp for sightseeing. I had found a write-up on this house museum: the Casa Cristo. We enjoyed a tour with guide Robert, who had been several times to the US and was happy to host Americans.

The house was compact and simple. The family's animals lived in the floor below, which helped to keep the place warm. This is the only fireplace. Granny and grampa, as the senior members of the household, had first dibs on the warm inglenook.

The daughters of the Christo house moved to France in 1947 where they married and raised families. They kept their old home as a summer getaway, however, and didn't change it. Their descendants donated it as a museum in the 1990s with all its furnishings intact. 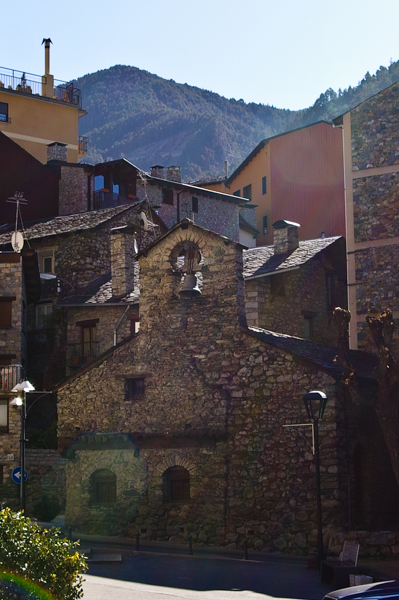 After we toured the house, Robert escorted us to the neighborhood church, St. Michael's. This ancient neighborhood is tucked into a more modern one, which is typical of what we saw in the Andorran towns. Much of the old has been displaced, but there are remnants here and there.

As modest as the church is now, the ghosting on the stone work shows that it has been expanded from its original size. 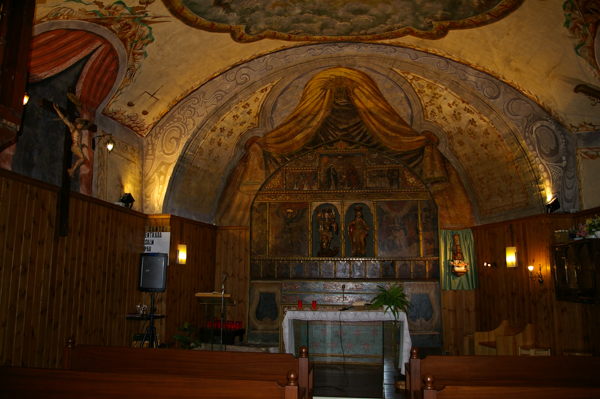 The rough-hewn exterior of the church didn't prepare us for the ornate interior. Most of the painting is from the 19th century, but the altarpiece, dedicated to St. Michael and St. John Baptist is old.

The painting on the ceiling shows Christ with Moses and Elijah. Robert pointed out that Moses is holding a copy of the ten commandments, but the 6th commandment is not listed! In the Roman Catholic tradition that commandment is the prohibition against adultery! Hmmm.

This is still an active parish. 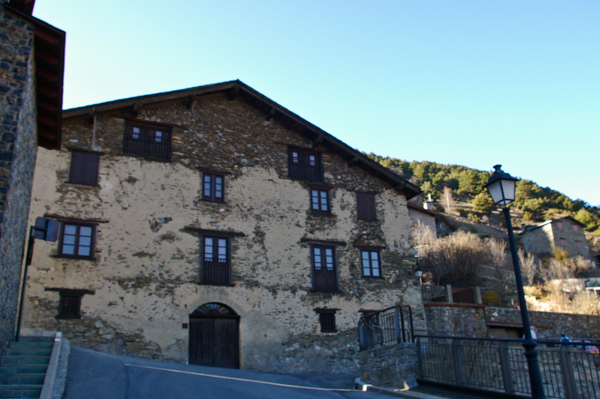 Later in the day we took the Touristic Bus tour to La Massana and Ordino. Outside of La Massana is the wealthy counterpart to Casa Cristo -- Casa Rull (pronounced ROO-ee). It had all the same components, such as animal stabling on the ground floor, but was much, much larger. At one time the family that owned it was the richest in the area and owned land both in Spain and Andorra.

In times past houses all had names. Extended families were associated with a house. When you met someone new, you could ask what house they were from and immediately you knew the kinship, social status and general wealth of the person just by the identification with the house. 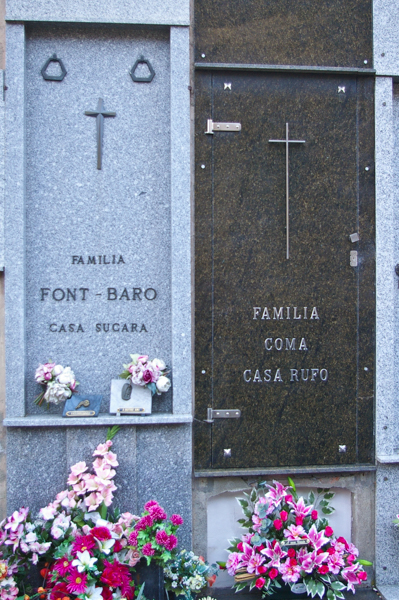 This identification extended even beyond life. I was amused to see these crypts that identified both the family name and the house they were associated with. In this cemetery families with the same name might be associated with a different house. I got the feeling that the house was more important in fitting a person into society than the name.

Note that the family name doesn't match the name of the house. 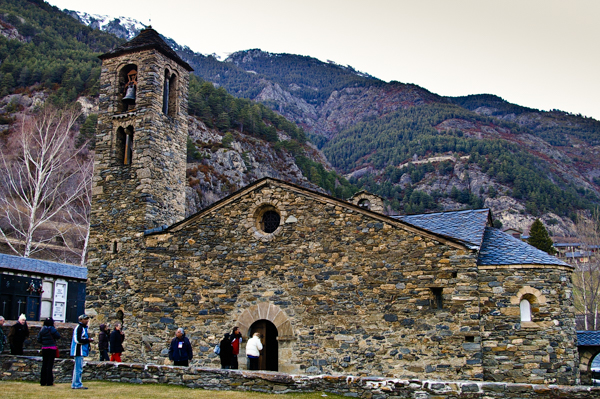 The original part of St. Martin's church north of Ordino dates from the 12th century. The cylindrical shape in the right of the picture was the original apse. When the church was enlarged in the 17th century, its orientation was changed and the old apse became a side chapel. 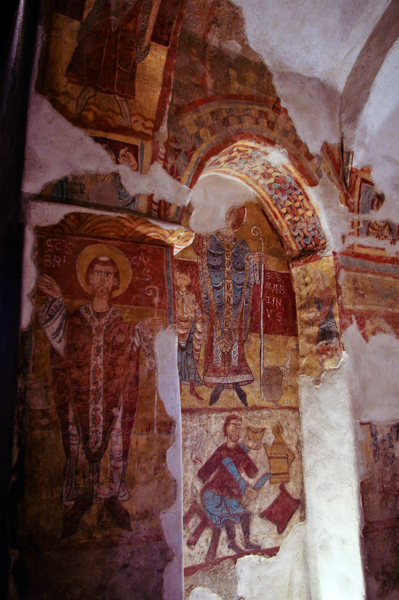 Inside the church there were several ornate baroque altarpieces, but these ancient murals were in the old apse. Experts believe they date from the 12th century -- almost a thousand years ago!

They really should be protected from light to retain the still vibrant colors. 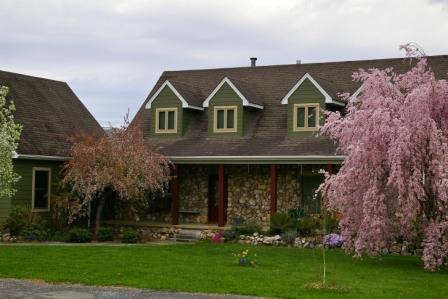 The next day we reluctantly bid goodbye to Andorra and our group broke up. Most headed to Madrid while a smaller group headed home. One member was down with the stomach bug that had affected many in the group and she remained in Andorra for an extra day or two before attempting the long bus & plane trip. One of our leaders was in the throes of something eventually diagnosed as "transient global amnesia," and was transported from the airport to a hospital by ambulance. (He is fine now.) These two incidents confirmed our decision to get trip insurance for all our future travel!

Although we didn't arrive home to see our cherry quite in full bloom (that was following week), it was quite spring-like.