As usual I only took a camera to the slopes once. It was beautiful as to sun and sky, but windy. As a result I didn't get many pictures of the various parts of the mountain. We either tried to stay where it was sheltered, which didn't give a lot of variety, or we tried to get the heck out of the wind as quickly as possible, which didn't allow a lot of time for snapshots. 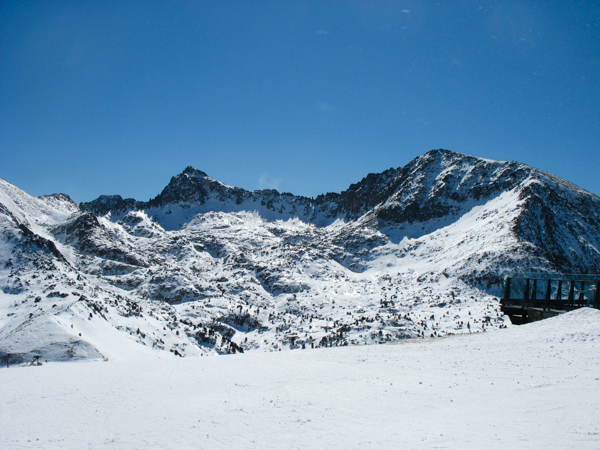 The area where we skied was called Grandvalira. It spanned several bowls with interconnecting lifts.

The view from the top of the gondola was lovely, but most days the wind at this location was brutal. We had such mild weather in Barcelona (and in the Andorra valleys) that we weren't expecting hurricane conditions on the mountain. Although the resort did a grand job of grooming the slopes, by the end of the day the snow had either been skied or blown off the icy base.

All those lessons at Blue Knob and years of skiing "eastern boilerplate" came in handy.

This view shows both the expanse of the bowl adjacent to the gondola and the effects of the wind, which is blowing snow up over the ridge in the distance.

The wind was so strong this day that Rosemary, a super skier, was blown off her feet! She decided that it would be a good day for shopping and called it quits after one run.

The locals said the strength of the wind was unusual. On the days when it wasn't windy, the weather was delightful and the snow quite good. 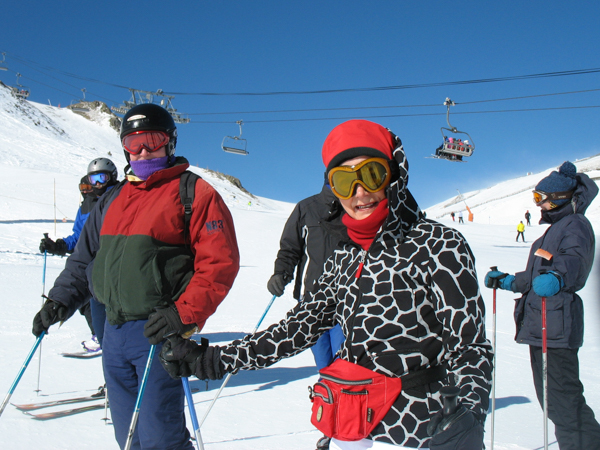 Steve and Rosemary bundled up against the wind. But what a beautiful blue sky!

Skiers in pictures uniformly show kinship with the Michelin Man! 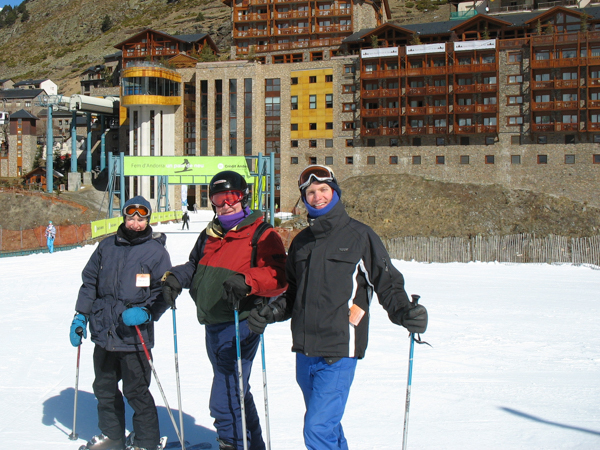 After Rosemary and Dick packed it in, I continued on with Martha, Steve and Aaron. Aaron led us down toward the village of Soldeu (pronounced sol-DAY-oo) where we found slopes with plenty of snow and no wind! We also found plenty of people who were seeking the same and long lift lines as a result. 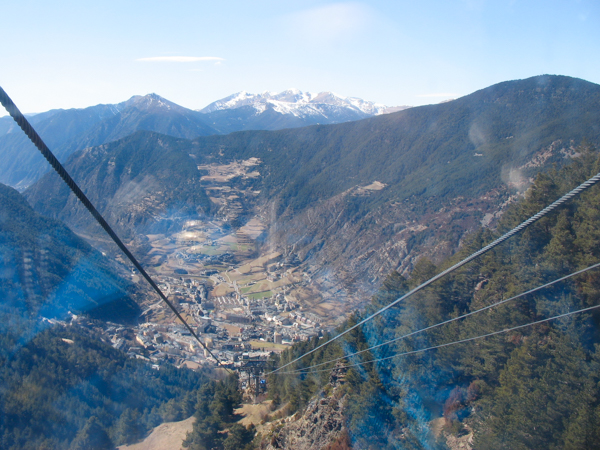 After a good day skiing, the long gondola ride down to catch the bus to the hotel is a quiet interlude. The reflections don't enhance the picture, but I wanted to show the steep terrain. Even though almost every available spot is terraced for farming, there is very little arable land in Andorra.

A common feature of European skiing is the relative lack of "ski-in/ski-out" lodging. Typically you have to take a bus to a lift to the ski area like we did here. Andorra does have villages, such as Soldeu and Pas de la Casa, where the lodging is located much nearer the lifts, even if not directly adjacent. 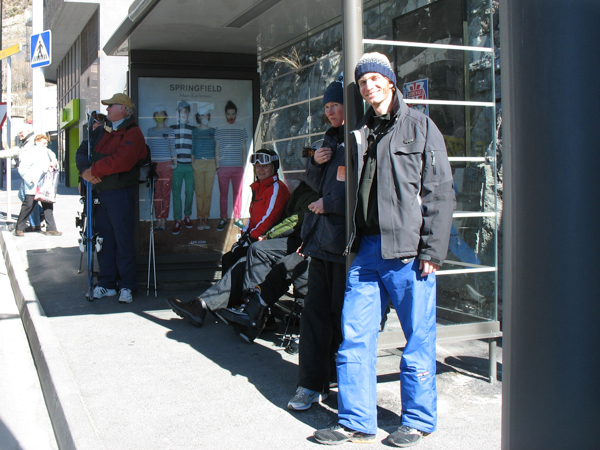 BRSC arranged for non-stop shuttles from the hotel to the base of the Encamp gondola. There were three trips up in the morning and three back down in the afternoon. We are waiting for the three o'clock bus.

Some folks in the group took the earliest 8:45 bus and returned on the latest 5:00 bus every day. More power to them!

A delightful cafe across the street from the bus stop had a sunny deck and Estrella beer at a very reasonable price. What's not to like?

To return to the Andorra pictures, click your browser's "back" button.