Carcassonne is located in the Languedoc region. Prior to the modern period this area had closer ties to the kingdom of Aragon than to France. The origin of the name Languedoc is (more-or-less) the place where the people say "oc" as the term for "yes." Dante was the first to record the name as lingua d'oc. The language once spoken in the area is called Occitan and is related to Catalan.

Carcassonne, and the Languedoc in general, was the location of the early 13th century Albigensian Crusade, directed by the Roman Catholic church against the Cathars (the discussion at these links is pro-Cathar as were all the others that I found). 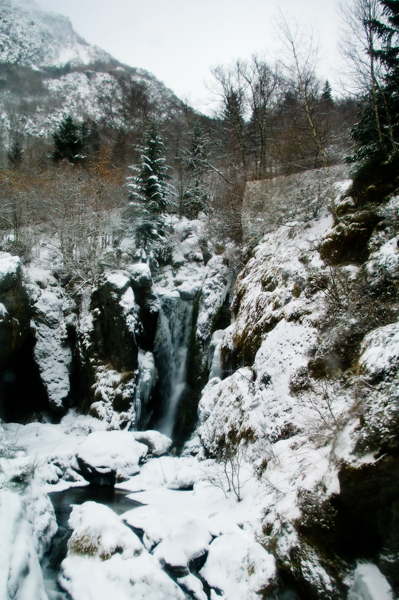 One snowy morning we climbed into a bus for the three-hour drive  Even though the ride was long and grueling -- especially on snow-covered roads across the mountains -- the scenery (what we could see of it) was lovely and Carcassonne is a fascinating place.

The trip through the mountains passed quaint villages and lots of scenery. I snapped this cascade outside the bus as we waited for a snowplow to clear the road.

We were disappointed that we didn't get passport stamps at any of the Andorran border crossings. Usually the bus didn't even come to a complete stop before being waved on. 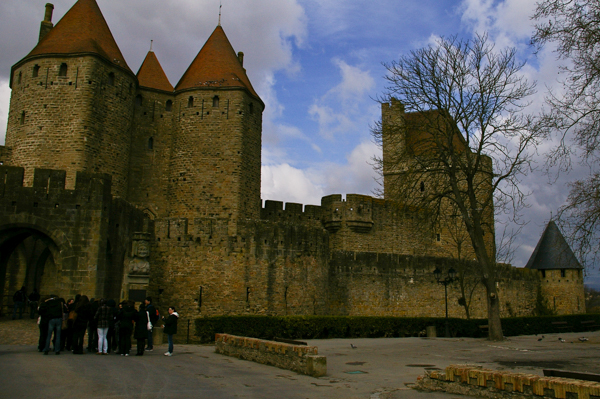 We moderns think of the countryside as being peaceful and idyllic and the cities as places of danger, but for most of human history the opposite was true. Cities were fortified and defended places of relative safety in a threatening world.

All European cities of any age were walled. Most have either torn down their walls to expand or have incorporated them into subsequent building projects as we saw in Barcelona. Thefortified city of Carcassonne was abandoned in the 17th century as the countryside became more secure and strategic alignments between countries made it unnecessary as a military presence. It has, therefore, retained its walls. 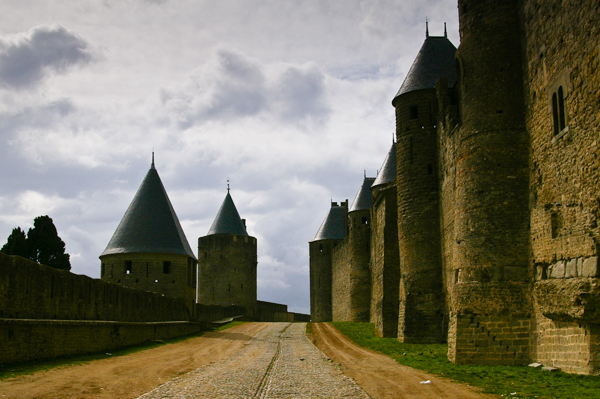 The moat or lists, between the outer fortifications (on the left) and the inner walls was never intended to be filled with water. It enabled troops to move under cover to any location around the city. 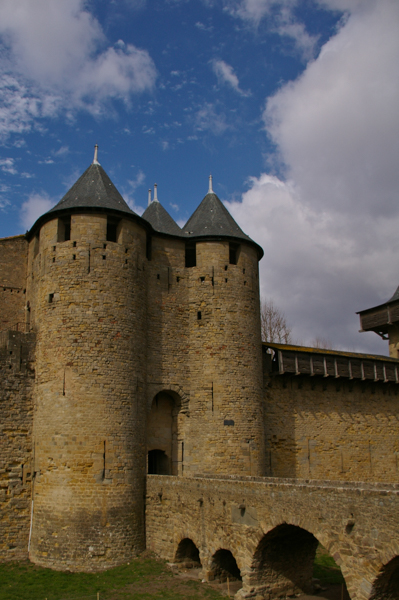 During the centuries that the fortress was abandoned, it deteriorated to the point that the French government planned to dismantle it. There was an outcry, however, and the government commissioned historian and architect Eugene Viollet-le-Duc to restore it.

He did a great job, but he did make at least one mistake: originally the roofs of the towers would have been of tile and either flat or at a much lower pitch because there is no burden of snow in this region. His restoration used slate and steep pitches such as would have been found in northern France.

These towers guard the entrance to the central castle or chateau. The long narrow slits or embrasures, backed by wide openings, protect archers or gunmen while giving them a wide arc in which to fire. The arch over the gate is a machiolation, used to drop stones onto attackers. An opening in the floor above it allows access.

For more on the restoration, check the Carcassonne culture communication web site. Click on "English" to get the English version (unless you read French!). 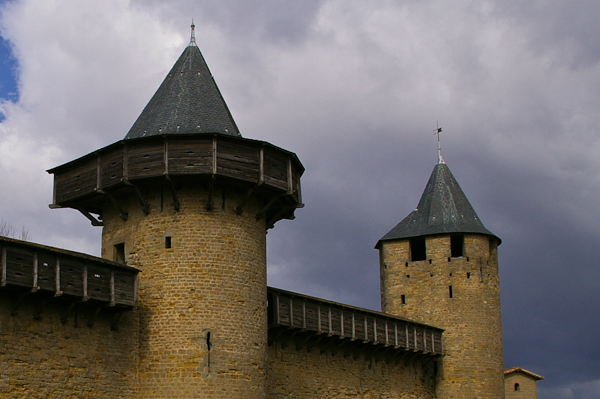 The wall and tower to the right of the gate above illustrate wooden hoardings installed in times of attack. Defenders stationed within them fired through slits and dropped stones onto attackers. The tower to the right shows "putlog holes" that supported the hoarding.

There is a site dedicated to medieval warfare that once had a better description of hoardings than the dry-as-dust Wikipedia info above. That information seems to have been removed, but I've included a link to the site anyway because it has numerous descriptions of Carcassonne including its no-longer-extant fortified access to the river for water during a siege. 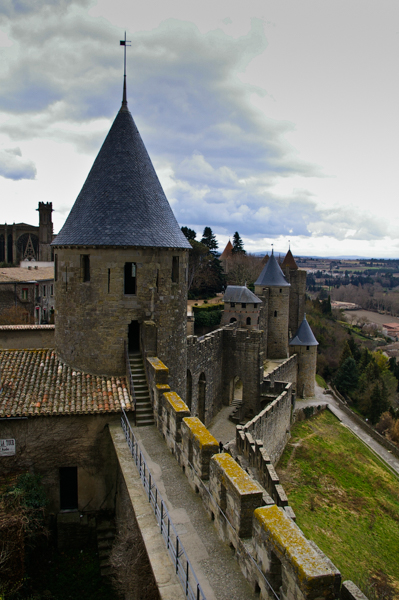 Once inside the castle our guide led us around the castle walls. On this side of the city, the castle is on the edge of the city walls, but is amply protected by the steep hill at its base. The area in front of us is the keep, or most secure place within the multiple layers of fortifications.

Pictures don't show it, but on the day we were visiting the wind, which was much complained of on the slope in Andorra, was punishing. We had gotten too used to the mild weather in Barcelona. Here it was cold with occasional showers. Brrr.

On the plus side, the season and the weather meant that we had the place to ourselves. It is jammed in the summertime with long waits to get into the castle. 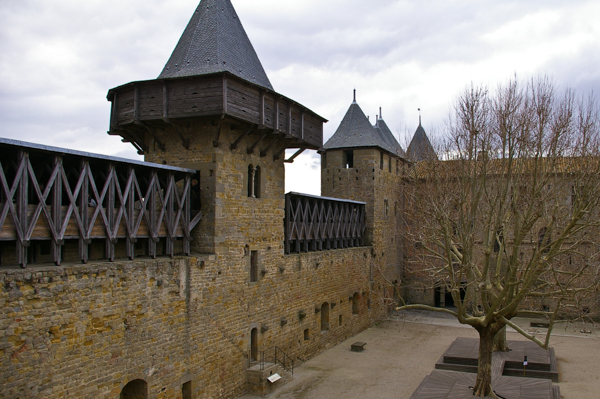 The hoardings lfrom the inside. They protected the defenders as they passed along the top of the walls. Wood, however, made the defenses vulnerable to fire. This danger was minimized by covering them with wet animal skins. Must have been pretty smelly!

With its multiple layers of fortifications, Carcassonne may have been impervious to direct attack, but it had no easy access to a source of water and was vulnerable to siege. According to the medieval warfare site above there was once an extended fortification to the river where water could be obtained. If so, I'm surprised that we heard nothing about it while here. 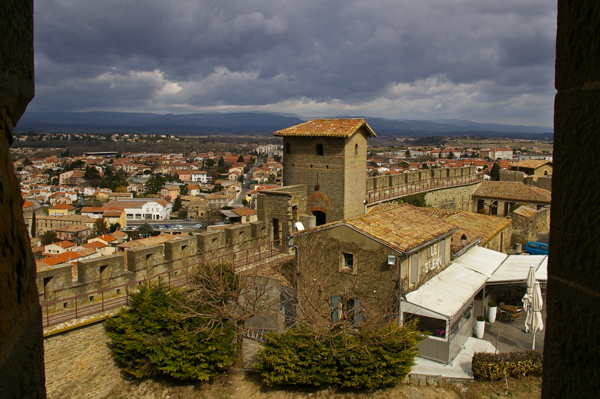 This view looks over the "new city" of Carcassonne, which merely dates from the 13th century.

The hill of the fortified city was occupied as early as the 5th century BC. By the 2nd century BC, the Romans controlled the settlement they called Carcaso. The tower in the center of this photo is a remnant (or built on a remnant or incorporated a remnant) of the old Roman wall.

The Visigoths took over in the 5th century and ruled until the city fell to the Moors in 725. They held it only until Franks under Pepin the Short, the founder of the Carolingian dynasty, captured the city in 759. In the 11th century, the rulers of the area were vassals of the king of Aragon in Spain. After the Cathar Crusade, the French crown confiscated the walled city. 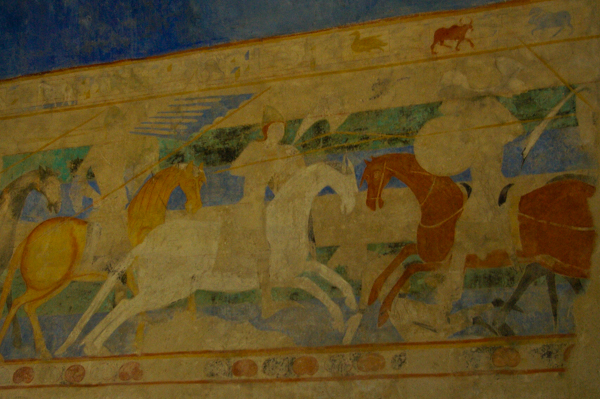 The castle keep is now an architectural museum. We didn't have time (natch) to visit -- even though it was inside and away from the wind. One room had remnants of murals depicting one of the crusades to the Near East.

The liberal use of blue pigment is an indication of the wealth of those who commissioned the mural (the entire ceiling in this room was painted blue). 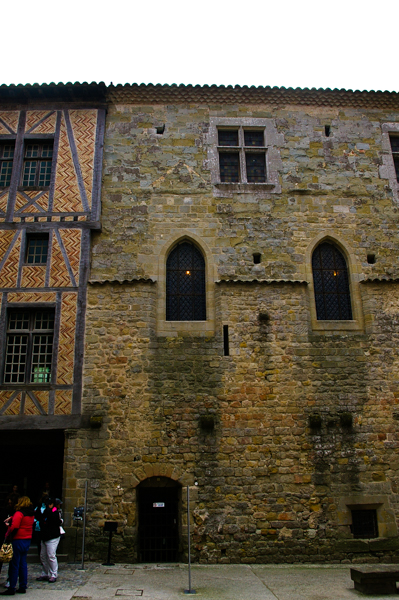 The wall facing the courtyard in front of the castle keep gives a concise history of construction.

The older part of the wall, prior to the Albigensian Crusade, is topped by roof tiles, halfway up the wall, that have been overtopped by a later addition. The rounded Romanesque arch can be seen over the door.

The later addition is characterized by Gothic arch windows.

Above that there is another shadow of a roof topped by rectangular renaissance windows.

Our guide had no comment on the half-timbered section to the left.

After our tour of the castle, we walked through the old town streets to visit the basilica of St. Nazaire. This 15-16th century house opposite the church is the oldest domestic structure within the walled city. The wider upper story is characteristic of a medieval house. It provides additional living space while allowing the maximum possible street width. 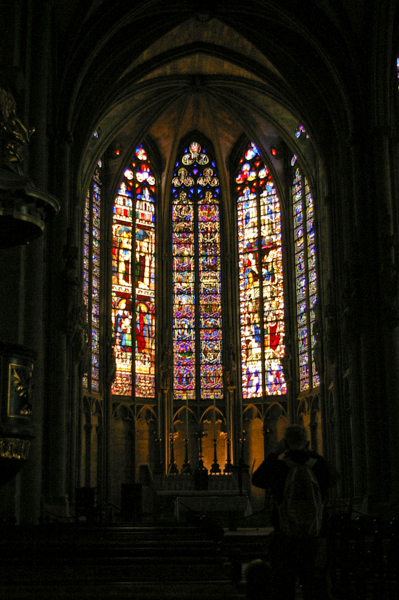 As is often the case, the basilica, which once had been a cathedral and is still an active parish church, had portions dating from different times. The Romanesque nave  with rounded arches and small windows dates from the 11th century. The airy gothic apse and transept are from the 13th century.

The stained glass windows are deemed the most beautiful in the south of France.

We have always heard the term "basilica" applied to a particular architectural form, but we learned here that it is also a designation by the Roman Catholic church of a particular status. The designation is made by the Pope. 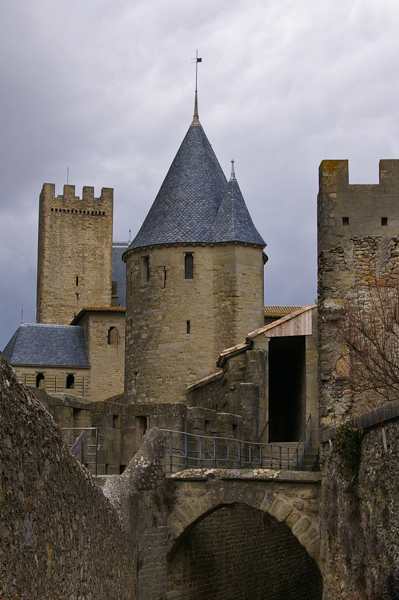 After touring the basilica we made our way to the lower town. The streets were steep and we got a different view of the battlements. All the varying angles, towers, arches and walls make an interesting composition.

The walled city stands high above the lower city. The river can't be seen, but it follows the wooded section in the middle of the picture. 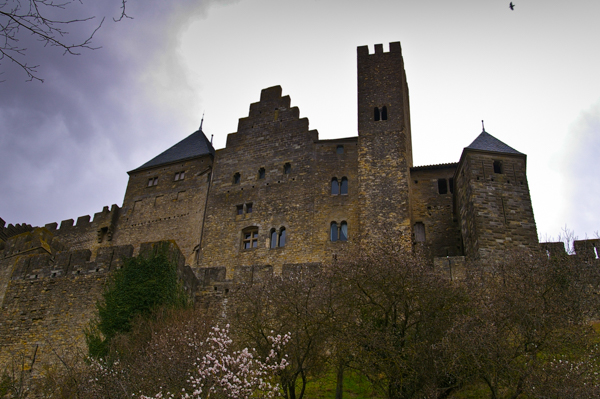 The view of the castle keep from below. It is a formidable obstacle for an invader.

After our tour we had a bit of time in the lower town for lunch. Had we not been so cold, we might have done sightseeing or shopping, but instead we headed for the first cozy restaurant we could find. After a delicious meal of "a jug of wine, a loaf of bread," and cheese with each other and our friends, we made our way to the bus for the long ride back to Andorra.

To return to the Andorra pictures, click your browser's "back" button.