Our cat Baba Ghanouj had recently died and we were not interested in another pet until friends called with a story of a stray kitten up a tree - such a cute tiny ball of grey fluff - they couldn't keep her because they already had a cat. Oh, the poor little thing!

We spent a long time coming up with a name for the little creature. "Muffin" fit in with the food theme described in the write-up under Baba, but it was really short for "Ragamuffin." She must have been separated from her mother before she learned proper kitty hygiene. She came with another odd feature – her whiskers had been cut off! (They grew back without incident.)

Our experience with cats was limited to Baba and Muffin was nothing like him. As she grew she developed her own endearing traits, but it was a learning experience for us all. One unexpected thing was her desire to play fetch. We found a little ball, the rubber core of a golf ball, and bounced it for her. She'd chase it down and bring it back. Another favorite game was blanket toss. When we washed the sheets and remade the bed every week, she insisted on her time of being tossed in the blankets (so much for clean sheets). She liked "helping" us rake leaves in the fall by taking flying leaps into the leaf piles. When we shoveled snow, she batted little bits of snowballs from one side of the drive to another earning the nickname Pelé.

When Muffin was still a kitten, Butterscotch came into our family. Although friends assured us she would accept him, that was NOT the case! She resented him terribly for the rest of her long life. We think it was because when he came, he took one look at this scruffy kitten with long greasy hair, pushed her down with his snow-white paw, and gave her a thorough cleaning. She never forgave him, although she did learn to keep herself presentable if only to avoid his future attentions. Muffin outlived Butterscotch by several years. When she eventually died, we buried his "casket" (see more on his page) with her even though we were afraid that she would haunt us as a result. Not that this would be a bad thing!

She was a single-family cat and had no patience with anyone other than me and Jim. Our first vet called her "she-devil." When we moved to California, she once had to stay at the vet's for a procedure. When I went to pick her up, they pointed down a row of crates and said: "The last one on the end; you go get her." I think they were surprised to see her wrap herself around my neck without a trace of hissing or scratching.

Muffin was our last house cat. After twenty years of having a cat in the house, when she was gone, my asthma went away. It turns out that I'm allergic to cats! 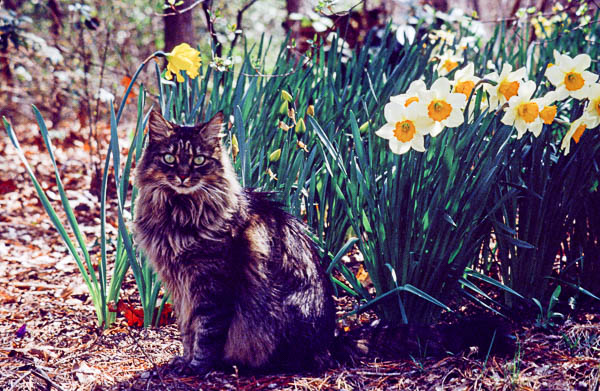 Muffin was a beautiful cat. We didn't know her background, of course, but we think she was a Maine Coon Cat – at least in part. She even liked to play in water. 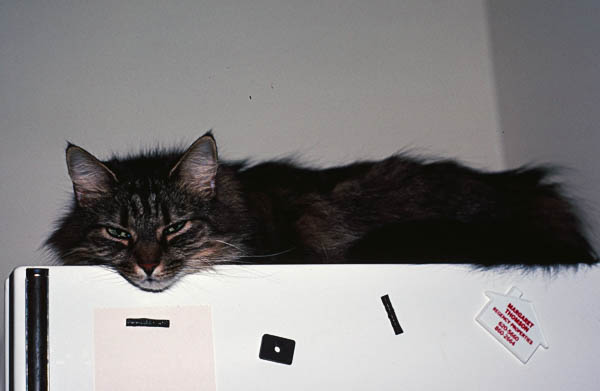 In her younger years she was quite the climber. Finding her on the top of the refrigerator was a common occurrence. We also had a tree that provided access to the roof. Amazing how much noise a cat can make running around the roof!

She was indignant that she had to climb down a tree backwards! Squirrels can go headfirst; why can't I? It was just too undignified. 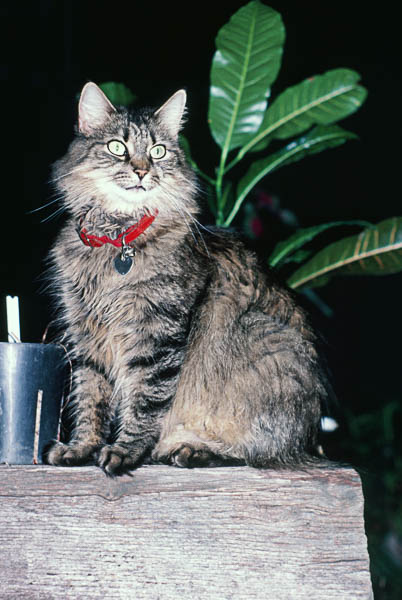 At first we made her wear a bell to protect the neighborhood birds. Once she made the mistake of stalking a mockingbird, which can be quite aggressive when defending its nest.

After getting soundly pecked, she developed an undying fear of birds. The hunting instincts were still there, so she would start to stalk them, but invariably back off. 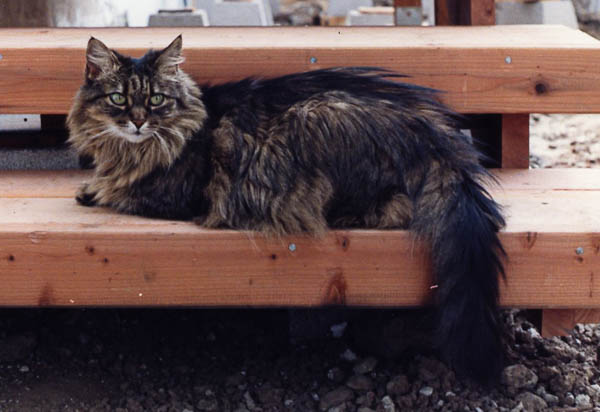 When we built a deck at our house in California she was a born supervisor. 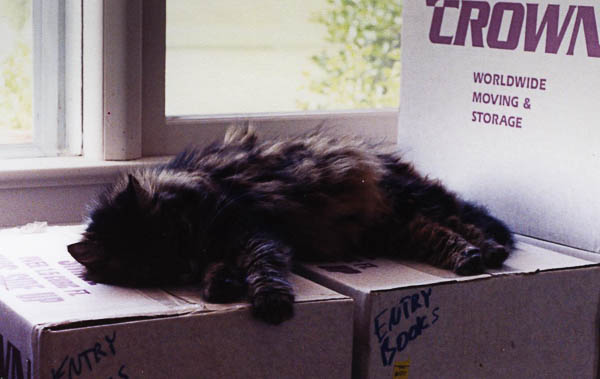 Muffin was elderly when we moved back to Virginia. We arranged a non-stop flight from San Francisco to Dulles, but the airline lied. We were told at the airport that the plane wasn't suitable for animals in cargo. We had to take another routing that changed planes in Chicago. Protest was futile.

The plane was delayed and we almost missed our connection. We raised a ruckus at the gate and said they had to hold the plane until our cat was on board. They did. When Muffin arrived, the pilot announced (to great applause) that the plane could now depart because the cat was aboard!

She doesn't seem too ruffled by her new home.