I first met Butterscotch at the condo where I lived before marrying Jim. He was a stray, of course. My neighbor Grace (who had been my neighbor before we bought adjacent condos) took him under her wing. Since we both already had cats neither of us could keep him. When there was no answer to our advertisements, we split the cost to have him castrated and found a home for him with a friend of mine whose cat had recently died.

My friend had a baby not long thereafter and Butterscotch needed a new home. By that time Jim and I had married and left the condo for a house. Our cat Baba Ghanouj had died and allthough we had adopted a kitten, Muffin, everyone assured us that the kitten would accept an older cat. Not true! When he arrived, the always immaculate Butterscotch pushed over the scraggly kitten and gave her a thorough washing. She never forgave him. We don't know how old he was when he came to live with us, but we expect he was about three.

I don't have many stories about his younger years because Butterscotch was far too dignified for cute cat tricks. His adventures bordered on the tragic. One day we found that his tail was at an odd angle and looked to be broken. When the vet x-rayed it, he found that at some point before we knew him, one of his thighs had been shattered. Whoever owned him at the time had cared enough to have the bone set with a pin to stabilize it. Over the years, the pin had worked its way out and was pressing against the base of the tail. The vet said he could remove the pin but couldn't guarantee either that the leg would heal properly or that the tail would recover. The leg did heal and the tail did recover. It was so sad to think that he had lost such a caring family, but at least he had found one that was equally caring!

The other near-tragedy was his sudden disappearance. Our cats were never confined to the house. They liked to be out and about and we lived on a very quiet street with little traffic. One day Butterscotch didn't come home. We posted signs. We walked adjacent neighborhoods calling. Nothing. Finally after several days a neighbor called. He had been out of town and came home to strange sounds coming from his basement. Since our posters were still up, he called. Sure enough, Butterscotch had gotten into the basement through an open window, but was unable to get out. Muffin had been so happy without him and when we brought in an emaciated and starving Butterscotch, she was devastated! The only welcome he got from her was a hiss.

In his later years, Butterscotch went blind. By that time we were living in California on a fairly busy street and decided to keep him indoors. He was miserable. He cried. He moped. He generally seemed depressed. So we decided that a short happy life was better than a long miserable one and started letting him out again for short periods. He loved to visit our neighbor across the street, but was so careful about listening for cars before crossing that he never had an incident. He eventually died of natural causes at a good age.

After he died we had him cremated. Our thought was that we'd get his ashes back in a little paper bag suitable for scattering in his favorite haunts. But no. What we got back was a little sealed cedar casket with a tiny lock and a tinier key. It would have taken an ax to get to the ashes! We tucked the casket under the kitchen table where he loved to sleep and forgot about it. When we moved back to Virginia, the movers brought it to us and we said, "oh, that's Butterscotch; we have to take him." They looked at us funny, but packed it away. As we were settling into our new house back in Virginia, we put the casket on the hearth because he would have liked it there. Once my mother was visiting and asked about the little cedar box. "Oh, that's Butterscotch." "But he's dead, isn't he?" "Yes, those are his ashes." She looked at us funny, too.

When Muffin died, we buried them together. Together in death as they never were in life. 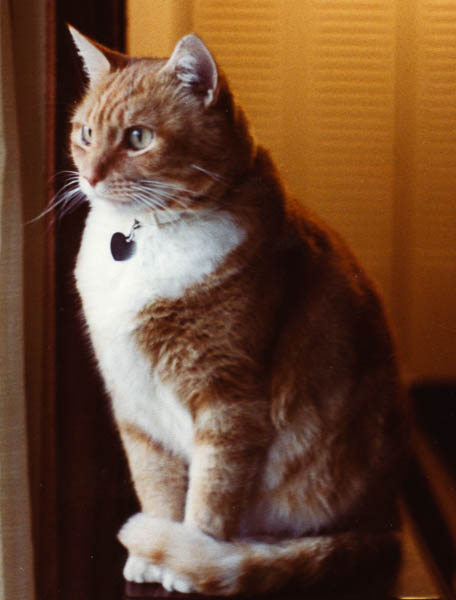 This was the picture we posted when he was lost. At one point we took it down to the county shelter just in case someone turned him in. Jim had to drag me out on account of all the beautiful cats abandoned there. A family with a little boy was adopting a puppy. That made it a happier visit. 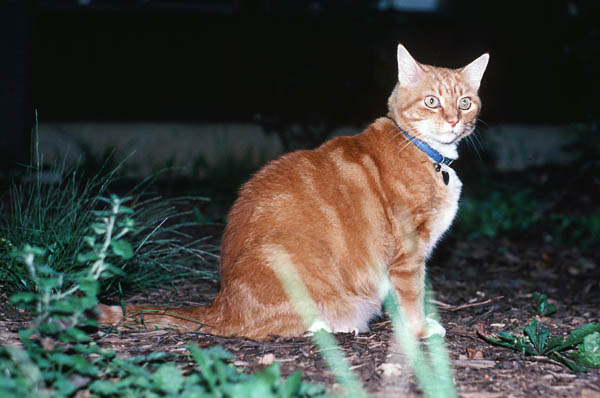 When we lived in Reston the cats loved to go on walks with us. On summer nights we walked to the end of the cul-de-sac and they followed along keeping out of the road. 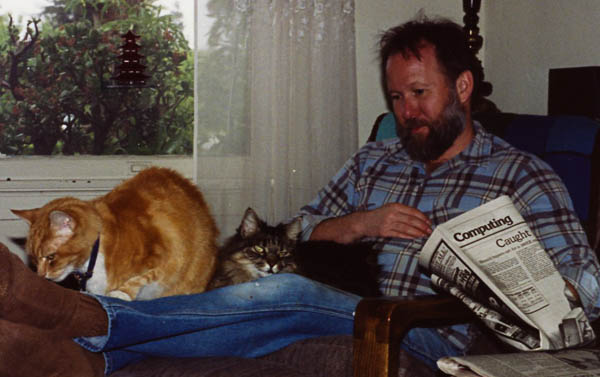 This was one of the few times that the two cats consented to curl up together. Well, I like to sit on Jim's lap too.

Even so the kitties don't look very happy together do they?