I was particularly interested in Riga because one of the members of our long-time ski club was from there.

Before we arrived, we had another lecture from Amir Weiner about "Putin's Baltic World." 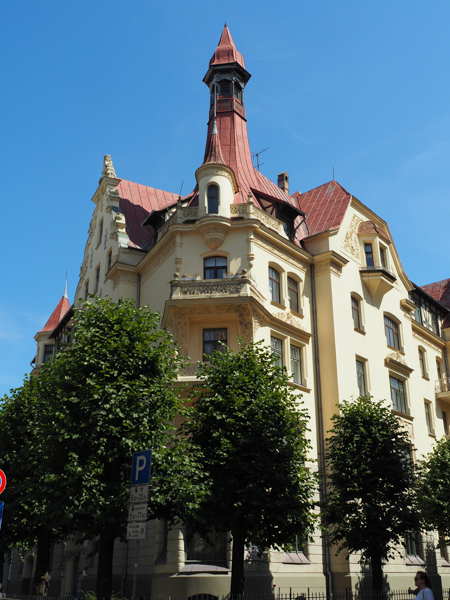 Riga experienced a growth spurt in the middle of the 19th century. It outgrew the medieval city center and new suburbs sprang up. Unlike many cities, urban planning dictated the growth. Also in the mid 19th century a new faculty of architecture produced a number of locally trained architects.

In the late 19th century a movement of art and design developed in reaction to academic and revialist trends. It was called variously Art Nouveau (Belgium & France), Jugendstil (Germany), Modernisme (Catalonia), and Secession (Austria and other places). This became the dominant architectural style in Riga for a time.

We started our tour in Riga by walking around a neighborhood filled with Art Nouveau buildings.

I can't remember the specifics of which buildings were designed by whom, but it was fun to see them. Most of the ones we saw were from the earlier eclectic and perpendicular variants. Click for more pictures of the cityscape. 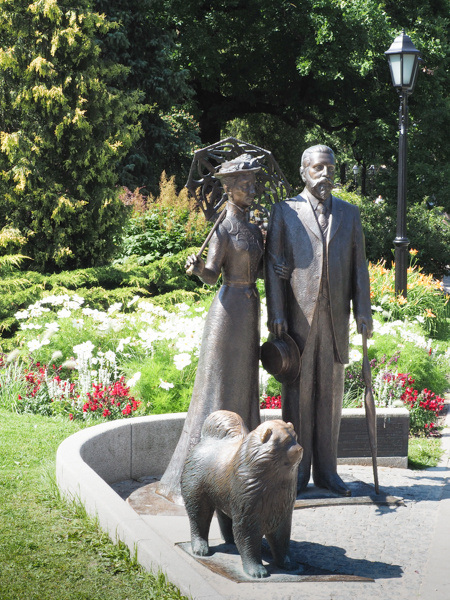 After the Art Nouveau district we made our way to the perimeter of the old city center. A park and canal now mark the location of former city walls. I liked this memorial to the former mayor, George Armitstead. It hints at the cosmopolitan nature of Riga at the turn of the 20th century. Armitstead was from a British merchant family resident in Riga. He was mayor during the period of growth when the Art Nouveau district was built. At that time the middle class of the city was transitioning from German and Russian heritage to native Latvian. 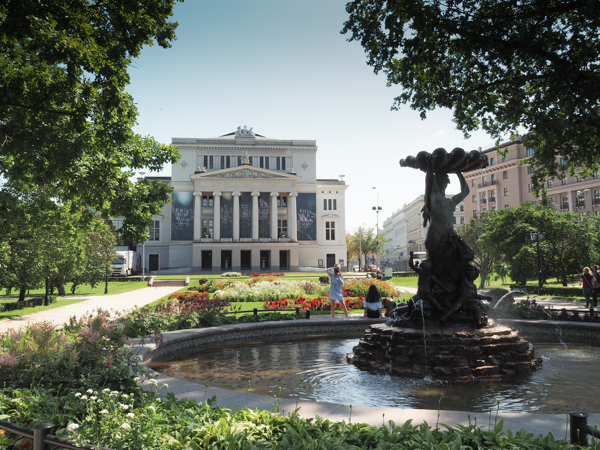 The Latvian National Opera House was in the same park. German-speaking theatre, including both opera and ballet, dates from the late 18th century. Latvian opera was founded in the late 19th century.

The company maintains an active program. At the time we were there, the ballet Peer Gynt with Grieg's music was scheduled. Tempting! 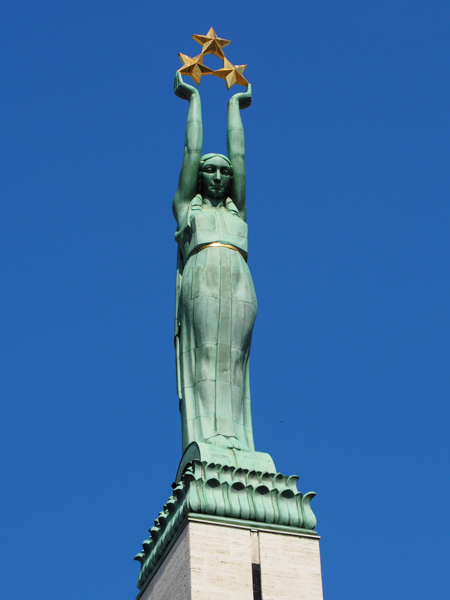 Our guide told us the poignant story behind the Riga Freedom Monument.

After centuries of domination by other powers, Latvia achieved independence for the first time in 1918. Individual contributions funded this monument to soldiers killed in the struggle for freedom. It was completed in 1935 and replaced an earlier monument to Peter the Great.

The crowning statue represents Liberty and she is holding three stars symbolizing the three primary regions of Latvia.

Not long after the unveiling of the monument, the country was forcibly annexed by the Soviet Union in 1940. The Soviets wanted to destroy the monument (and all it stood for), but decided to save it and rewrite the symbolism. "Liberty" became "Mother Russia" holding aloft the three Baltic States. The propaganda fooled no one except perhaps those who perpetrated it.

A 1987 rally at the monument fueled the independence movement that resulted in Latvia separating from the Soviet Union in 1991. 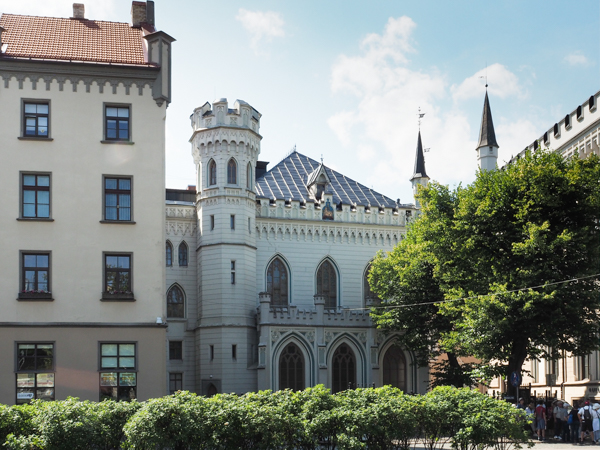 The Small Guild Hall was the site of the children's dance presentation that we would see later. The building is not old, but it is beautiful inside and a great place for such presentations.

Guilds were ancient associations of merchants and craftsmen. In theory they assured that practitioners of a particular trade were adequately trained. In practice they often served to shut out newcomers and disfavored groups such as women or Jews. The institutions declined in the modern era although they held on in German cities into the 19th century. 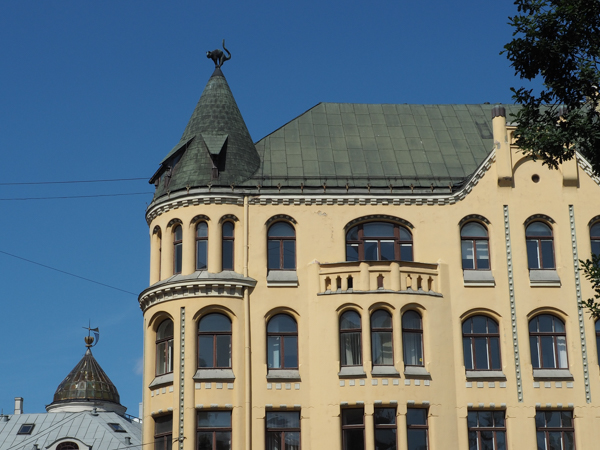 While on the subject of guilds, a Riga landmark is the "cat house" across the street from the Great Guildhall. The story goes that the businessman owner of the house was denied entry to the Great Guild. This had a negative impact on his ability to do business in the city. In revenge he added two cat sculptures to his building and pointed their raised tails toward the guildhall. Anyone who has spent time with cats knows what that gesture means: piss on you.

The guild promptly sued the man, but lost. Eventually, so the story goes, he was accepted into the guild and thereby rotated the cats so that their business end faced away from the guildhall.

This all took place at the beginning of the 20th century, so it indicates how long remnants of the guild system held on in Riga, a Hanseatic city long under German influence. 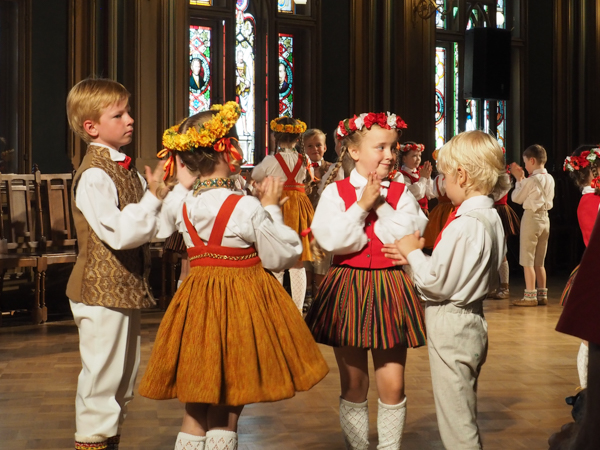 The children's dance troupe "Dzintarins" charmed us by their spirited renditions of Latvian folk dances. I couldn't find any English-language information about them on the WWW, but the troupe has been in existence since 1953. Click to view a YouTube video of an outdoor performance similar to what we saw.

These youngsters, who range in age from 3 to teenagers, were exceptional. I took about 100 pictures and was hard put to narrow it down to just a few. Click to see more pictures. This was one of the high points of our entire trip. 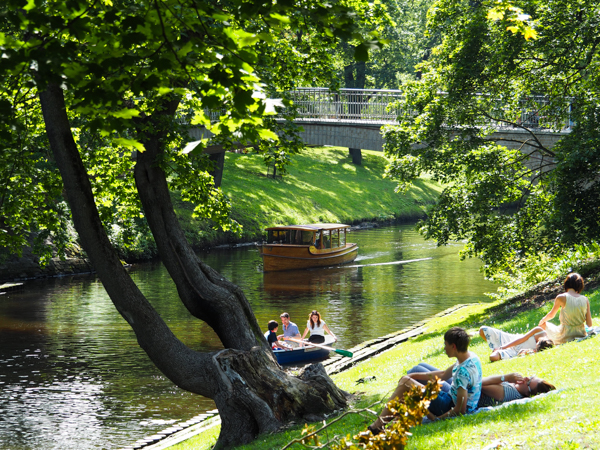 After the children's program we could choose from several options. Jim chose to return to the ship. I decided to visit the Museum of the Occupation of Latvia rather than participate in a tour of the old city.

The ongoing renovation of the Museum's main building means that a smaller exhibit is mounted in the former US embassy. I wanted to visit it because a long-time friend who fled Latvia had recently died. As is often the case she didn't talk about her experiences there and it wasn't until after her death that I learned she had lost a husband and two children during the dislocations of the Soviet occupation. The most moving exhibit was a series of video interviews with survivors of forced deportations -- especially those who had been children.

I left early and spent the remainder of the allotted time decompressing in the park across the street.