We covered a lot of miscellaneous ground on this day, but the high point was the Pennsylvania Academy of Fine Arts – even though Jim was disappointed that the painting The Gross Clinic was on loan to the Philadelphia Museum of Art, which was not on our itinerary.

We started out the morning with a walk down to the City Hall area. On the way we passed this union picket line.

They claimed that the contractor remodeling the adjacent building was not upholding wage and work standards for sheet metal workers. (The giant rat was advertising an exterminator and was unrelated to the protest.)

I can't comment on the justice of their particular complaint, but Fred told us that the unions had been sabotaging the convention business by their overly strict work rules. It was not only pricing Philadelphia out of the competition, but the delays and red tape required to get anything done was just too irritating for convention planners to deal with.

There are negotiations underway to improve the situation.

Jim, who grew up in a union town, has steadfastly maintained over the years that union leadership typically does not really have the good of the workers at the forefront of their agenda. 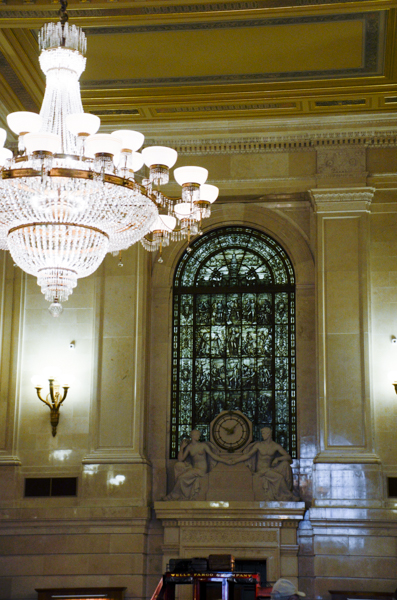 At one time Philadelphia was a banking and insurance powerhouse. Many of the large older buildings in the center city were built for those industries. As firms have merged or moved out of town, many of the buildings became vacant.

With the resurgence of center city, the buildings have been repurposed as hotels, apartments or condos.

The building is a lovely Beaux-Arts design and is on the National Register of Historic Places. The window depicts scenes from Philadelphia's history. 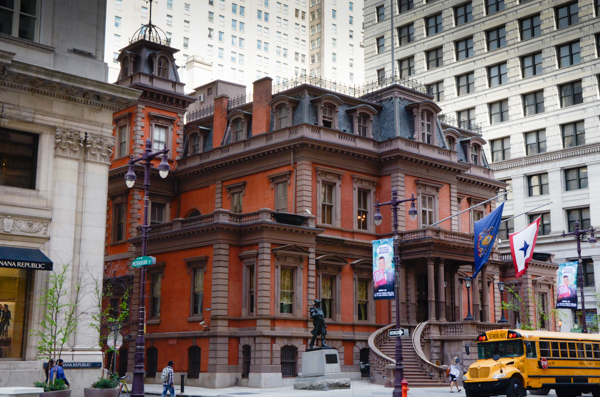 At the start of the Civil War, Philadelphia had a lot of southern financial and commercial connections and there was concern that it would tilt toward the Confederacy.

The Union League was formed to rally support for the Union cause. In the years after the Civil War it became an extremely prestigious club. It grew such that a large addition was built behind this original Second Empire building.

Not every older building has found a successful second career. This is a pitiful example of remuddling. Fred said that the upper stories of this building are empty. Buyers have been sought, but none have been found. It would make a nice boutique hotel, if something could be done about that horrid storefront and if it's structurally sound.

We were pleased to see on a later visit, that it was being renovated. The damage behind the storefront, however, was extensive. 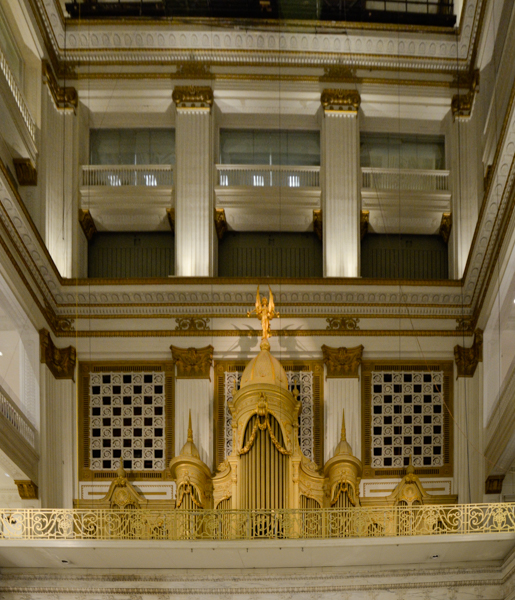 The old Wanamaker's building has been luckier. Many people were worried that it would be torn down or otherwise pillaged, but Macy's has taken care of it nicely.

Several floors have been turned into office space, but it still retains the grand central atrium.

There are concerts daily at 12:30 and 5:30 on the great Wanamaker organ, the largest playing pipe organ in the world with over 28,000 pipes ranging in size from 1/4 inch to over 32 feet in length.

And yes, you can still "meet me at the eagle." Roger looks like he might be waiting for someone, but he's just getting his picture taken.

Fred said the style was "renaissance revival." It was definitely over the top. 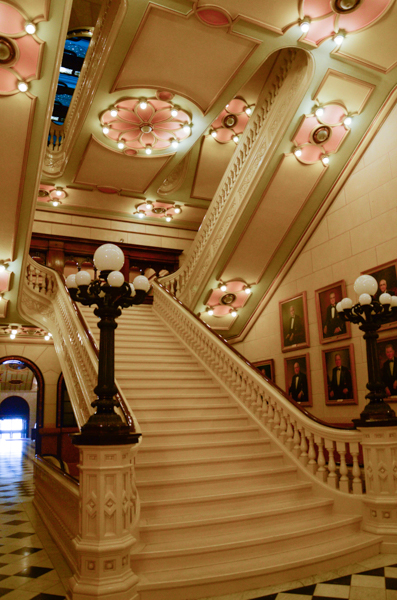 The interior was very grand. This central staircase, which we were admonished not to use, is austere by comparison with the ceremonial rooms.

Each of the ceremonial halls had a theme, but they all had the same layout. The "Egyptian Hall" will need to represent the others. They are listed on the reservation board shown below.

The central chair is for the Grand Master, if that's the right term. It is always on the east wall. There are similar chairs on the west and the south for other leaders.

Our guide told us that the hieroglyphs that are reproduced around the room are authentic and could actually be read by someone who can read ancient Egyptian hieroglyphs. I'll take his word for it! 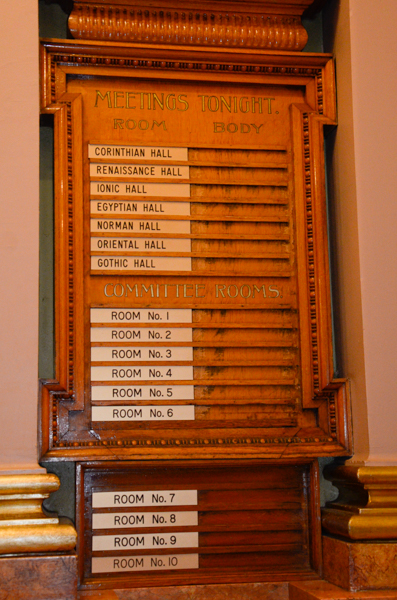 The temple isn't exclusive to any one lodge. The Grand Lodge, e.g. the Grand Lodge of Pennsylvania, is an umbrella organization for multiple local lodges.

The various halls and meeting rooms can be reserved by any group (I think – at least by any Masonic group).

After visiting the Masonic Temple, we walked over to the Reading Terminal Market, which is on the ground floor of the old Reading Terminal. It hadn't occurred to me, but since some folks in our group weren't sure how to pronounce the name: it's RED-ding, not like what you do with a book.

Years ago, before the Reading ceased operation, Jim and I used to go through this terminal on the way to visit his family in Pottstown.

Now the upper floor, where the terminal was, is part of the Pennsylvania Convention Center. The lower floor is the market. I don't recall ever visiting the market before. 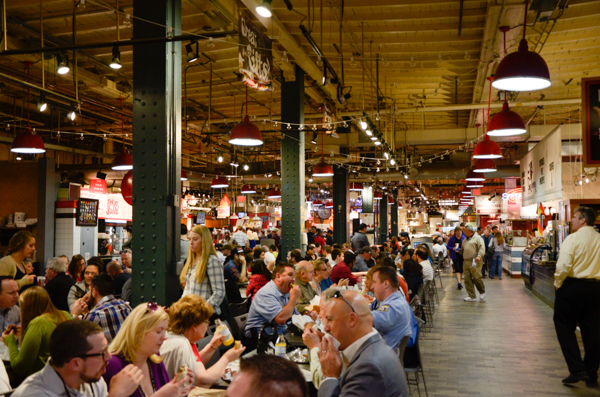 "Vibrant" doesn't begin to describe the atmosphere. Fred said that when a convention is in town it gets even busier.

Our favorite place was Bassett's Ice Cream (not that we tried every food stall). 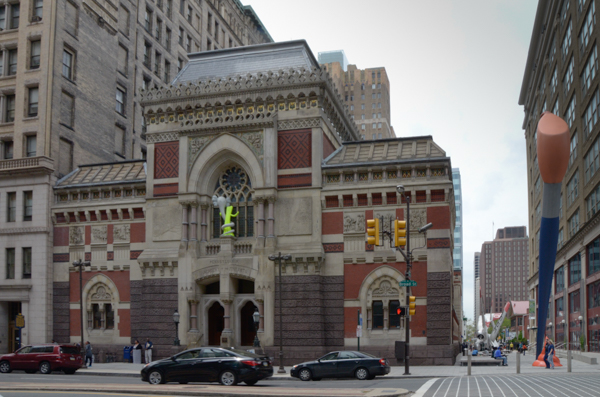 After lunch we walked to the Philadelphia Academy of Fine Arts (PAFA). The Academy was founded in 1805 by Charles Wilson Peale and others. It is the oldest art museum and school in the US, but it certainly hasn't stayed mired in the 18th and 19th centuries.

We toured this building, designed by Frank Furness and completed in 1876 for the nation's centennial. Traditionalist Philadelphians considered it a monstrosity at the time, but we liked it (particularly the yellow-green Gumby figure over the entrance).

The plainer building on the right is also part of the Academy as well as the open space between. 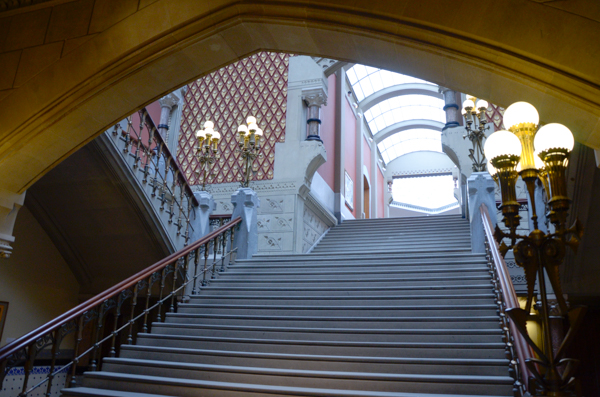 Unlike most museums there were no restrictions on non-flash photography except in the alumni room where paintings were for sale.

The building itself was worth the price of admission. This is the grand staircase. It had been designed as a free-standing iron structure, but subway construction caused some shifting of the foundation and it had to be reinforced. 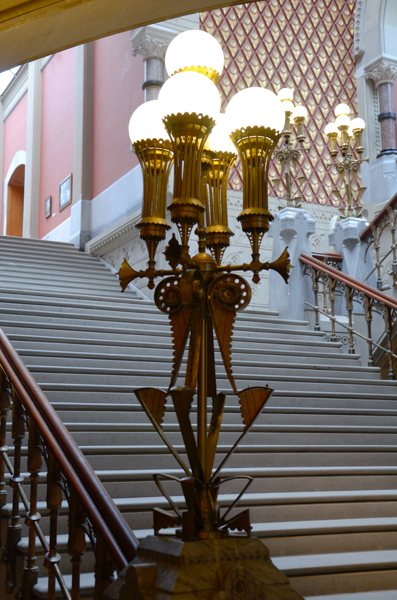 I loved the industrial lamps and bannisters pictured here and below. 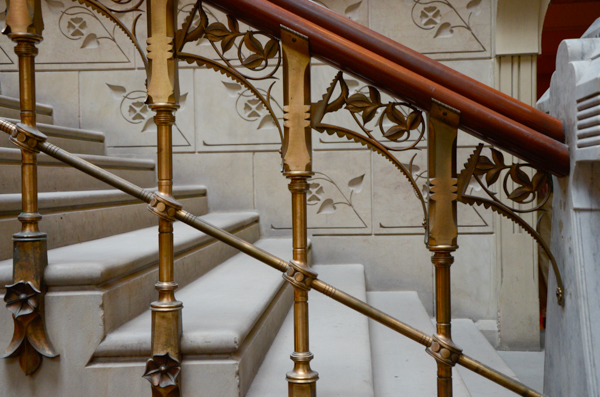 Some of the displays are set up like 19th century galleries. Nowadays museums are too austere if you ask me.

The woman pointing at the painting was the docent who led our group. She was a delight! And I found the portrait of the gentleman in the middle row who appears to be leaning out of the "window" of the frame also delightful.

I took a number of pictures of paintings just because I could. Click to see my favorites. 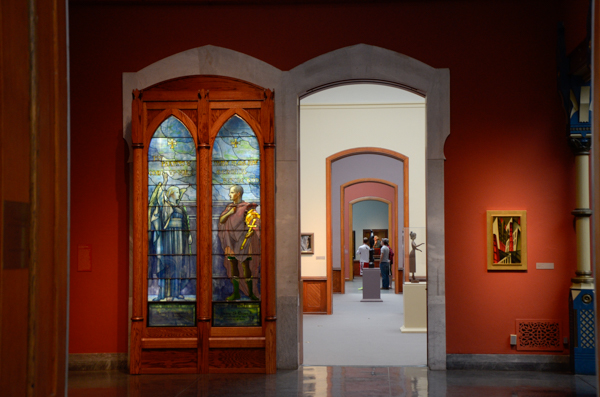 I'll say it again ... the building itself is worth the price of admission.

Even though it may indicate that I'm "uncultured," I confess that I don't care much for art museums any more. I could once spend hours at the Smithsonian National Gallery, but now I see so much beauty everywhere that standing in a building looking at static painting and sculpture just doesn't light up up my life the way it once did.

This place was an exception, both in the beauty of the structure and the range and quality of the art within -- and outside -- it. 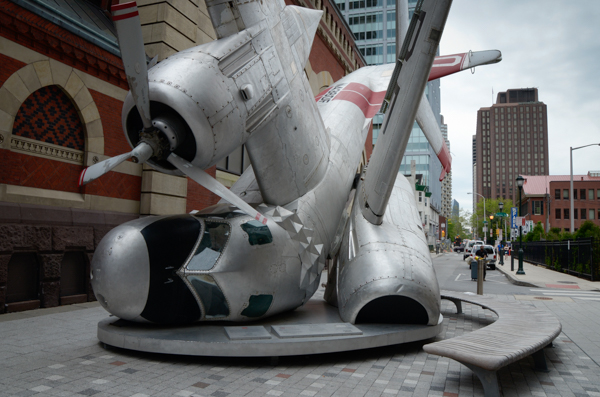 Grumman Greenhouse by Jordan Griska was commissioned for the new Lenfest Plaza outside the PAFA Landmark building. It actually has plants living in the belly of the plane facing the building. Couldn't get a decent picture, alas.

Gerry and Marguerite Lenfest, who contributed to this plaza, have also been major funders of the Lenfest Center for Performing Arts at Washington & Lee University in our hometown of Lexington, VA.

It's a small world. Speaking of which, another couple in our group is planning to move to Lexington shortly. He grew up here! 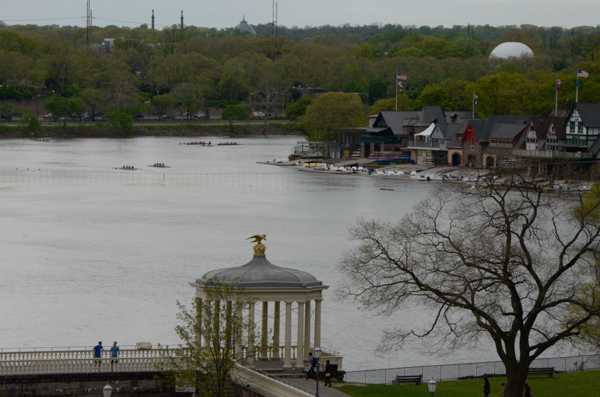 After our visit to PAFA we took a bus ride around the city.

One of our stops was behind the Philadelphia Museum of Art. This overlooks the Philadelphia Waterworks, which Jim and I visited later, and Boathouse Row. When we took the train to visit Jim's folks at Christmas, I enjoyed seeing all the boathouses from the train decked in holiday lights reflected in the river.

The Dad Vail Regatta was to be held over the weekend and boats are out practicing. (Drexel won the overall title, by the way. Several Virginia schools also participated; UVA was the highest finisher and came in 12th overall.)

Day 6 takes us back to the historic district.