On Thursday we had to swap guides with the other Road Scholar group in town. Fred led them on the same itinerary as we had done the day before and we got their guide, Nick Cvetcovic. Nick was as informative and entertaining as Fred (almost). 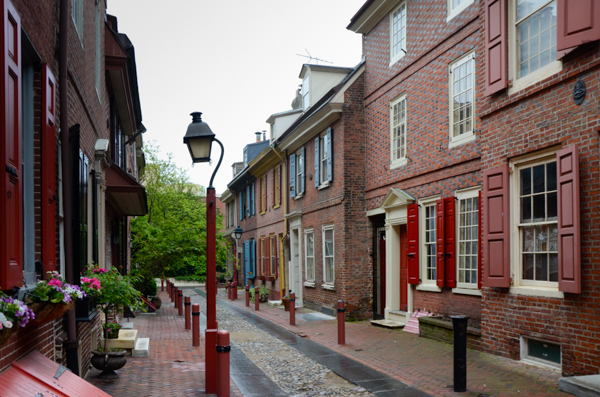 Elfreth's Alley is said to be the oldest continuously occupied residential street in the US. At least in the English-speaking segment. Spanish settlements in Florida and the Southwest may take exception to that. Some Southwestern pueblos could be contenders as well.

In any event, the official date for the start of the continuous-ness is 1702.

Original inhabitants were artisans or tradespeople who often operated their businesses from their homes. Makes for a short commute!

We didn't visit the museum, but there is lots of good info at the link above. 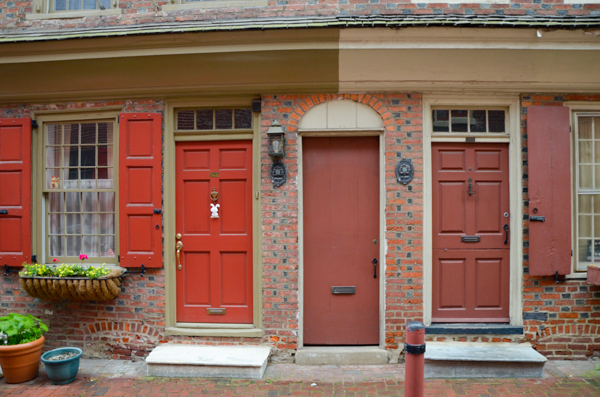 As in any long-established and successful neighborhood there is infill development. What had been a passageway to a back yard between two row houses has been turned into another house somewhere along the line.

As long as the development is sensitive to scale it works. 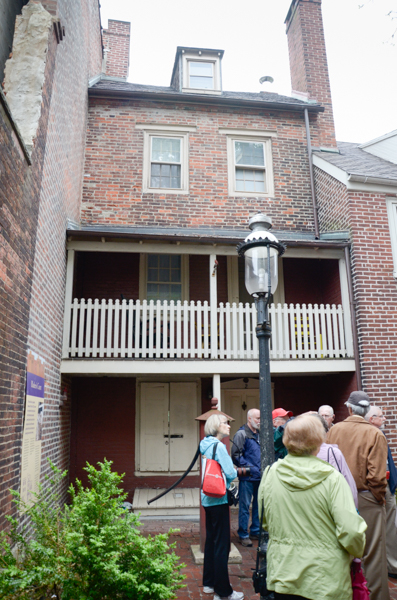 Another example of such development is Bladen's Court. We walked down an alley off the alley and found additional houses tucked in behind their neighbors.

These houses, three remain of the five that were once there, were built in the early 19th century.

The pump (handle can be seen beside the greenery) is a reproduction, but the original pump was installed in the late 18th century and provided water to the entire neighborhood.

Elfreth's Alley once ran between Front and 2nd Streets. It was right on the Delaware River. Nowadays I-95 runs nearby. 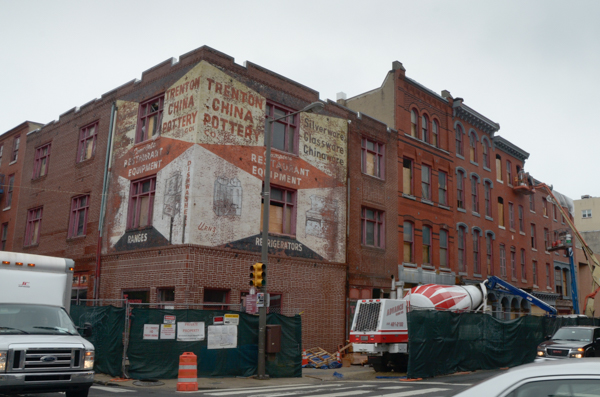 As we walked from Elfreth's Alley to Christ Church we passed through a 19th and early 20th century commercial district. These buildings may have housed shops, warehouses, or manufactories. This corner is being adapted for a new use – probably residential.

The store that was once located in this space still exists and still sells restaurant equipment. It has moved a couple of exits NW on I-95 and is now located in another old commercial district. It has a swanky web site. 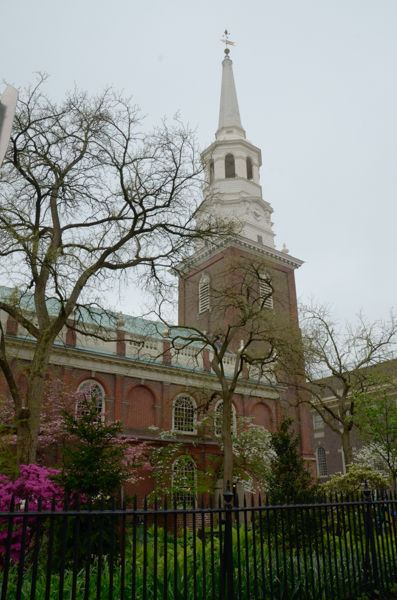 Christ Church was founded in 1695, but the current building dates from 1727.

The steeple was financed by a lottery organized by Ben Franklin, who is buried in the church burial ground located a few blocks away. Apparently the use of bake sales, bingo, etc. to raise money for a church has a long tradition. For many years the steeple was the tallest structure in the colonies.

The interior was designed by Thomas U. Walter, later architect of the U.S. Capitol. He is also the architect of my home church Lexington Presbyterian in Lexington, VA! It's a small world.

Many founders of our country worshiped here and this was the original home of the Protestant Episcopal Church, which broke from the Church of England during the Revolution. 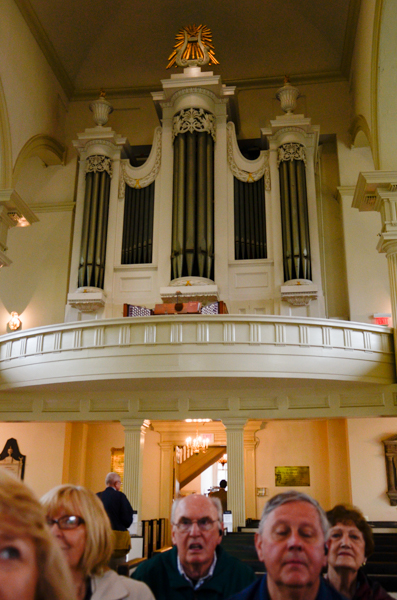 Another small world story: John Binsfeld, high school classmate of Jim's, was the organist for this church for many years. He is now retired, but our docent for the tour remembered him well. He was also a frequent performer on the Wanamaker organ. 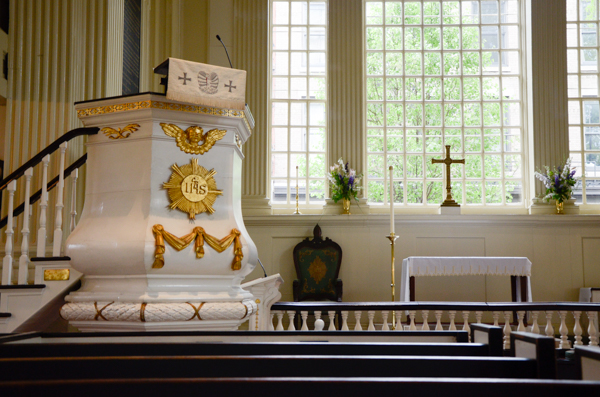 Originally the windows were clear glass as shown here. In the mid-19th century stained glass windows were installed, but they have been removed. We were told that they are now in a museum, but I can't remember which one and (for a wonder) Google can't find them. 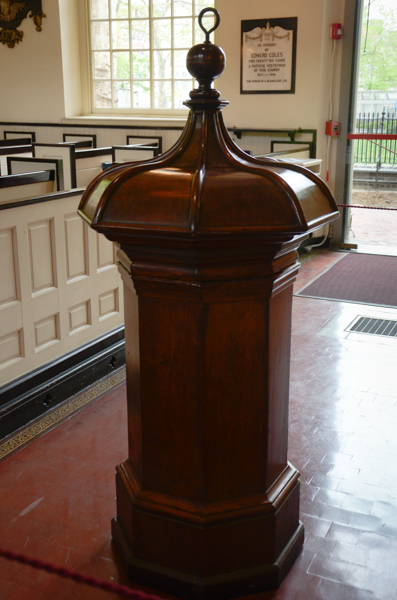 The baptismal font came from England's All Hallows Church, Barking-by-the-Tower. William Penn was baptized with this font in 1644 (he was baptized Church of England and didn't become a Quaker until much later). The loan was contingent on the font being used and it is still used today.

All Hallows is one of the oldest churches in London. It has been in existence since 675. It was badly damaged in the WWII blitz, so the loan of this font probably saved it from destruction.

I forget how old the actual stone font contained in this decorative structure is. 14th or 15th century comes to mind. 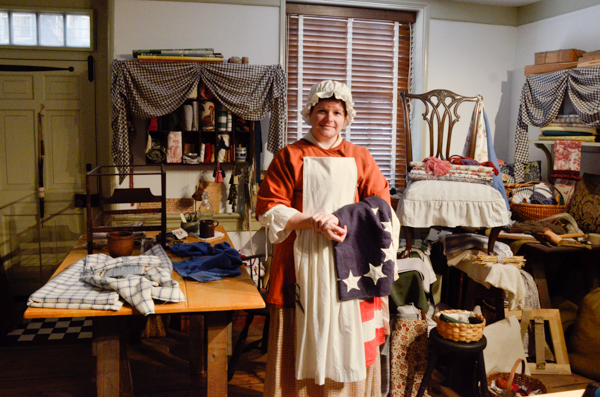 Our next stop was the Betsy Ross house. There is considerable doubt that Betsy Ross really made the first American flag, but the legend is now entrenched in the American consciousness. There is even some doubt as to whether this was her house.

Setting aside the truth or fiction of the legend or the authenticity of the house, this was one of our least favorite excursions. It was crowded and the "tour" lasted about 10 minutes.

That said, this lady was very pleasant and did a good job illustrating the story. 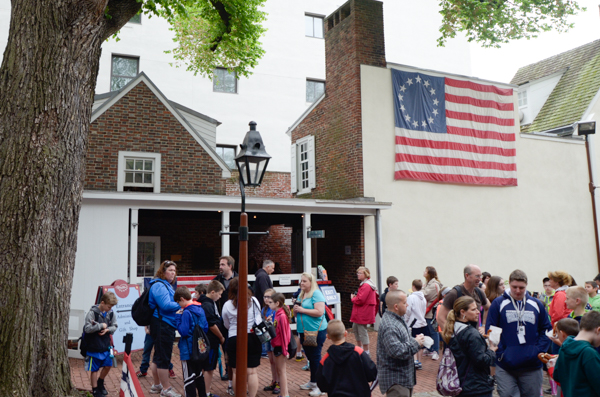 The rear of the house showing some of the crowd. Except for us the average age appeared to be about 13, with a decibel level to match. 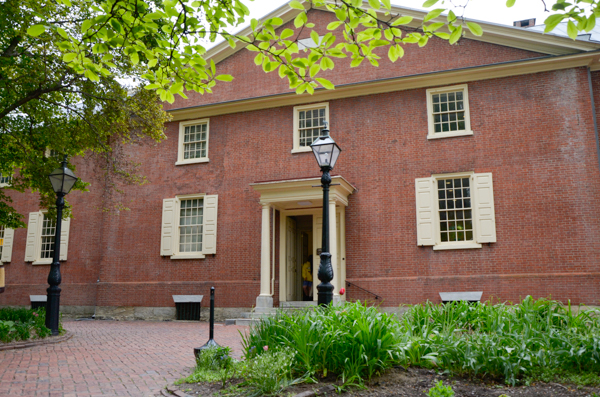 The Arch Street Meeting House is built on land given to the Society of Friends (Quakers) by William Penn himself. It was originally used as a burial ground. The structure was erected in 1804.

Oddly the founder of the US Marine Corps, Samuel Nicholas, was a Quaker and is buried here. 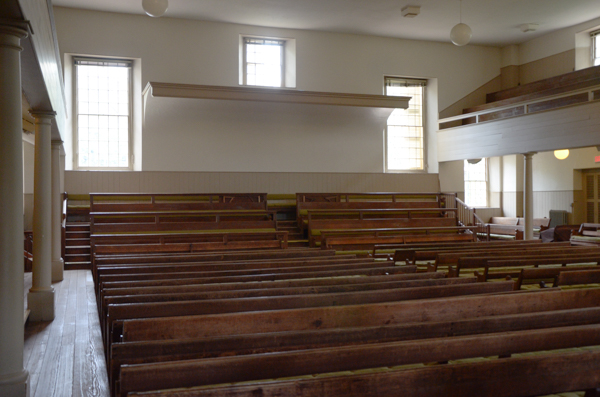 This is the room where services are held. In the traditional Quaker congregation there are no ministers, formal preaching, liturgy or music. The hour of worship is spent in silence unless one or more individuals are moved to speak – usually for less than five minutes.

The docent said that the space is often used for weddings.

Women have their own say in the running of the meeting. It is this experience that developed many early Quaker women leaders in abolitionist societies and suffragist groups.

I observed the same benefit from attending a women's college. 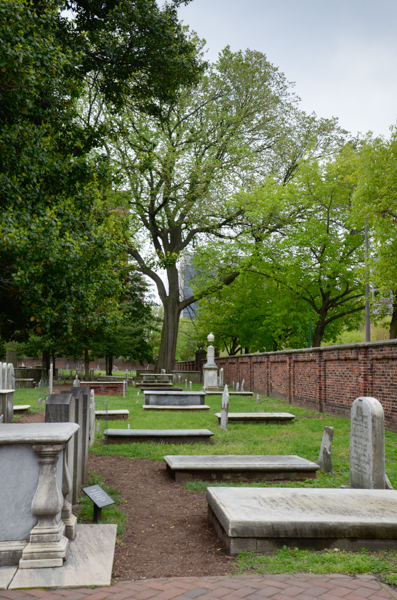 After leaving the meeting house we walked to Christ Church Burial Ground, which is not adjacent to the church. Ben Franklin and his wife Deborah are buried here in a spot that is easily viewed from outside the brick wall. It is traditional to toss a penny on Franklin's grave. He undoubtedly would not have approved of such a wasteful tradition!

This picture is take looking across from Franklin's grave, which is not especially photogenic.

A formal tour of the cemetery to visit all the notable patriots buried there was not free and we didn't take it. 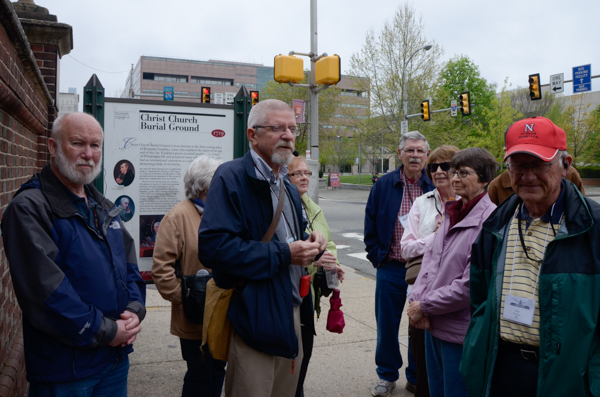 We are all listening to our leader-for-the-day Nick (in the center) explaining something historical.

Across the street from the Christ Church Burial Ground is the Free Quaker Meeting House, which is no longer used for religious purposes.

The Free Quakers broke away at the time of the Revolution because they chose to fight for independence. Since Quakers are strongly pacifist, these fighters were "read out of meeting" and formed their own organization.

Once the Revolution was over, bygones became bygones and there was no need for a separate organization. No one discussed how Samuel Nicolas escaped "excommunication" when he joined the Marines. 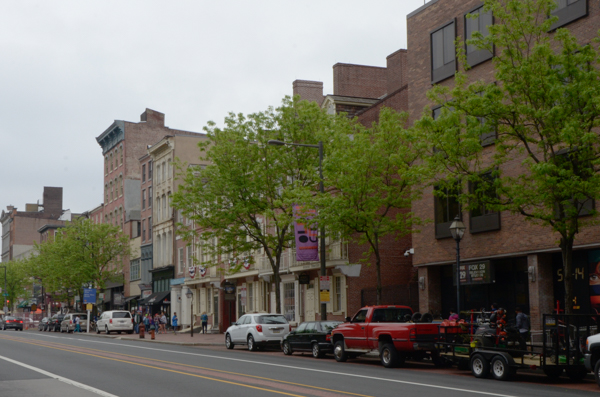 After Franklin's grave, our program for the day was over and we were on our own. Jim and I headed for the City Tavern for lunch, planning to walk past the Customs House where he used to work.

This was one block on the way. The taller buildings farther away are Victorian. The lower buildings in the center (hidden behind one of the trees) are restored colonial buildings housing a Franklin museum. The closest building is frankly modern. The use of similar materials and comparable sizes, however, makes for a pleasing streetscape. 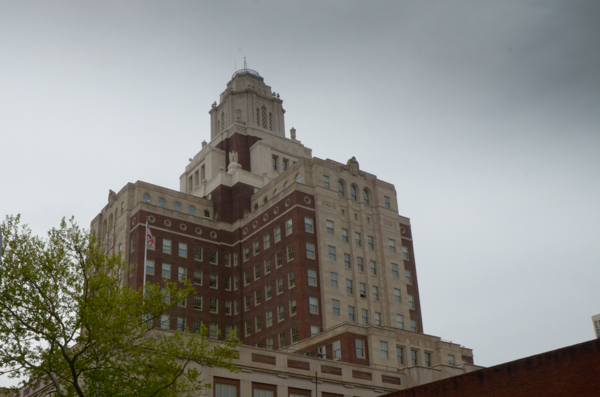 When Jim worked here USGS leased several floors of this building, including one of the upper floors, which housed the Chemistry lab. During his time here, Jim said he started in the basement and worked his way up to the 6th floor.

As we walked around the building to the City Tavern, we had a nice conversation with one of the security guards in the parking lot. He said that the upper floors were now mostly empty. There are still quite a few tenants, however, including the local passport office. That keeps the interior open to the public, so we decided to visit it after lunch. 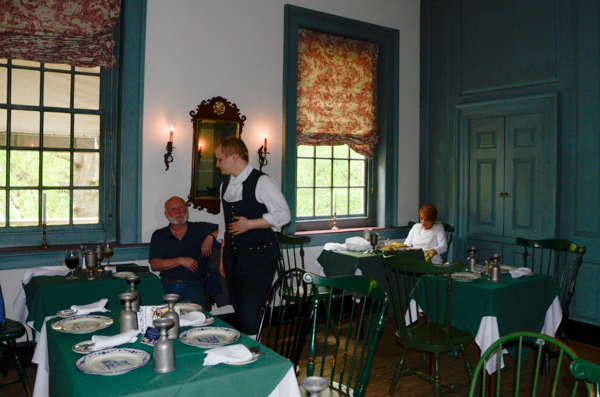 The original City Tavern was demolished long ago, but a replica was built for the bicentennial. The room where we dined would have been George Washington's private dining room back in the day when he was president.

The chef is dedicated to producing food that would be recognizable to a Colonial (no nouvelle cuisine here). Our meal was delicious. I seldom drink alcohol at lunch, but I had ale made according to an authentic George Washington recipe. It was hearty and good.

The tavern was the site of debates about governance and horse-trading over the framework of the government of our new nation. Congress nowadays would probably do a better job over a pint or two. Could hardly do worse. 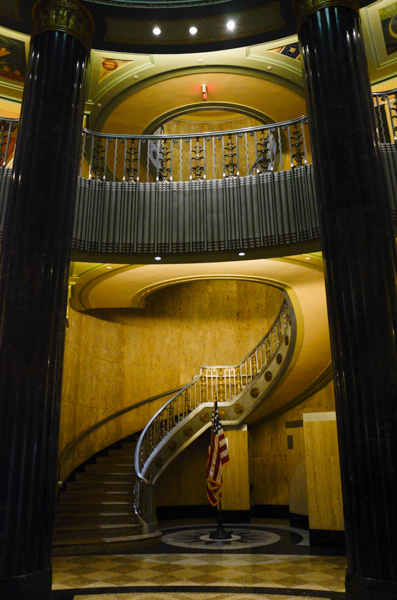 As I mentioned the ground floor of the Customs House is open to the public because of the passport office. Getting in was almost like getting through airport security though and I was admonished not to take pictures. After some pleading I was given permission to take some pictures in the rotunda.

The staircases were beautiful. I love the "New Deal" art era and these were great examples. 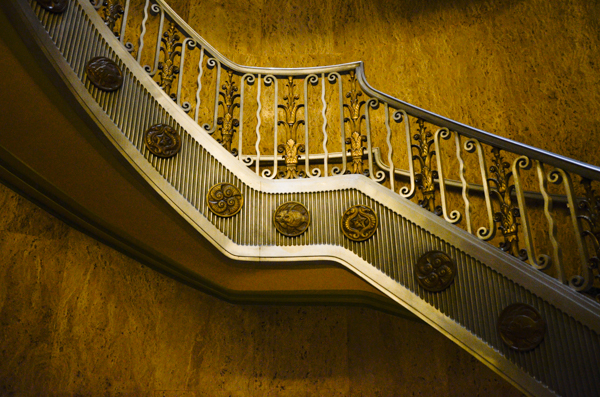 The medallions were sea creatures. I would have loved to get better pictures of them, but I was beginning to wear out the welcome for myself & my camera. 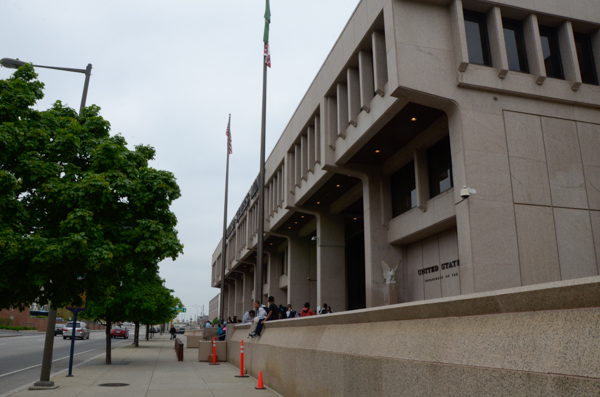 After the customs house we took a tour of the Philadelphia mint. In the early days of independence, there had been a debate over whether the US should coin its own money or contract it out. ("Off-shoring" isn't as new a concept as we might think.)

The eventual decision was to produce our own coinage so the first mint was established in Philadelphia. It is still the largest.

We enjoyed the tour even though we were accompanied by several of our closest friends under the age of 13. 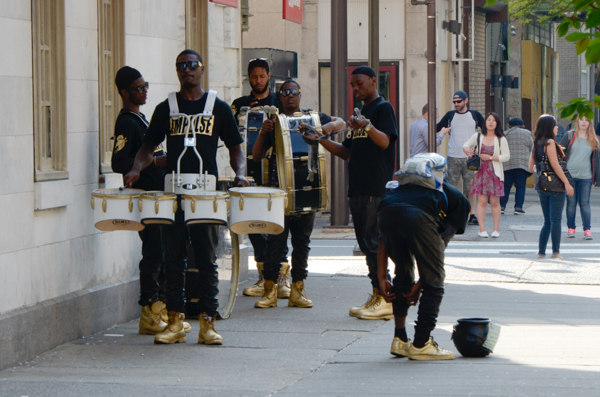 After getting back to our hotel we heard drumming out on the street. We had heard a similar drumming earlier in the week but had never been able to find the source. This time we caught up with these young men who were collecting money for their community drill team "Impulse."

Apparently drill teams are quite popular in the area and have been a good way to keep youngsters, boys & girls, off the street. We gave them a donation. They were hoping to get new uniforms.

That was the last of our adventures for the day. Use your back button to return to the overview page or click to continue directly to the next day.