It was hard to believe, but our trip was coming to an end and we were ready to come home. Our visit to Edinburgh went by in a blur. There was so much to see and very little time. We were glad to have another, also too short, visit in 2018. 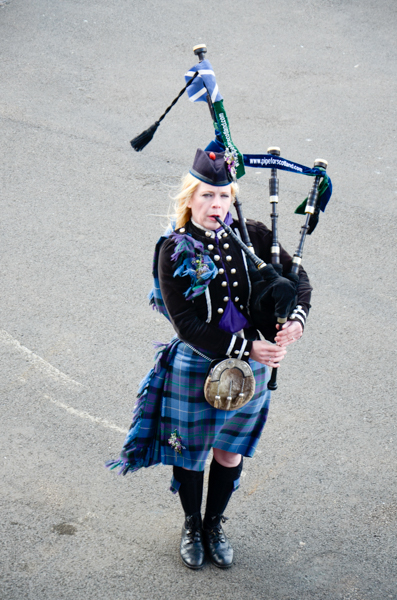 In Dundee we had a pipe band bidding us goodbye. In Edinburgh we had a solitary piper welcoming us. (Since she conveniently had her website address on her pipes I was able to look her up. Her name is Louise Cantara.)

It was very cold and windy, but she played for quite a long time. Every now and again she would apologize and run inside to warm up her fingers.

As a Scottish fiddler I know a number of pipe tunes and she played a good selection of them. From time to time she would also march around while playing – it's traditional and it probably kept her warmer.

One of the ladies on our trip shared that she played bagpipes in college.

I was disappointed that we didn't get to hear more Scottish traditional music, but happy that we did hear some pipes. 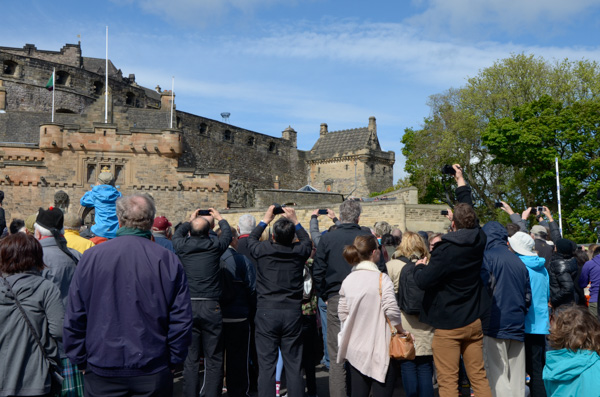 For the past several years there has been no hourly changing of the guard at Edinburgh Castle except on special occasions. We were lucky to be visiting on one of those occasions: the annual general assembly of the Church of Scotland.

Unfortunately we were a bit late getting to the castle and this was my view of the ceremony!

I'm sure it was wonderful. Every now and again I could see the top of a bearskin hat go by. 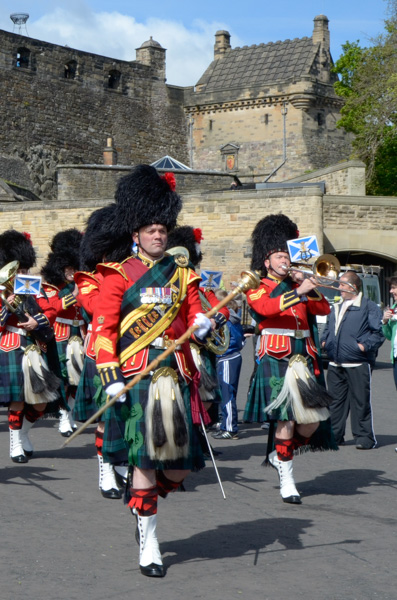 Not all was lost. After the guard ceremony the band marched out of the castle gates. The crowd parted like the sea and I got my picture. 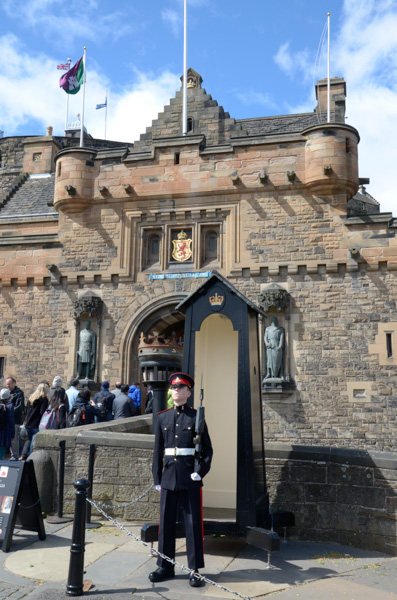 Later in the day I even got a picture of one of the guards. The band was much more colorful.

Another occasion for ceremony is the annual military tattoo in August. Much of the open space in front of the castle was full of temporary construction for that event. 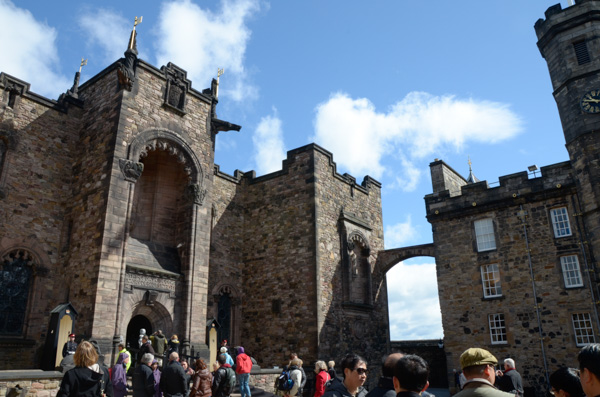 Although the castle itself was first constructed at least as early as the 12th century, few parts of it are ancient.

The left-most building here may look old, but it was constructed in the early 20th century as a war memorial. To its right is the Royal Palace built in the 15th century. Mary, Queen of Scots, gave birth to her son James here due to fear of assassination or kidnapping. She normally resided in Holyrood Palace. James survived to unite the crown of England and Scotland.

During the uprising of 1745, Bonnie Prince Charlie, Mary's great-great-grandson, resided at Holyrood and never attempted to take the castle. After the Scots were defeated, he fled to France and then Italy where he died in 1788. 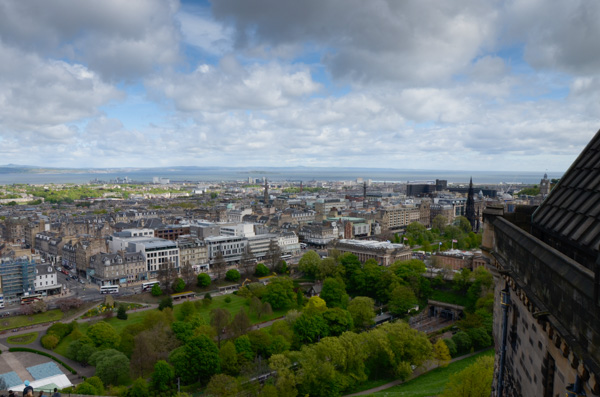 A view of the city with Princes Street Gardens in the foreground. Later in the day we walked down to the garden (and back up).

The castle is built on Castle Hill, an ancient volcanic plug rising high above the surrounding area. The castle has never been conquered by force of arms although it has been taken by treachery and by treason. 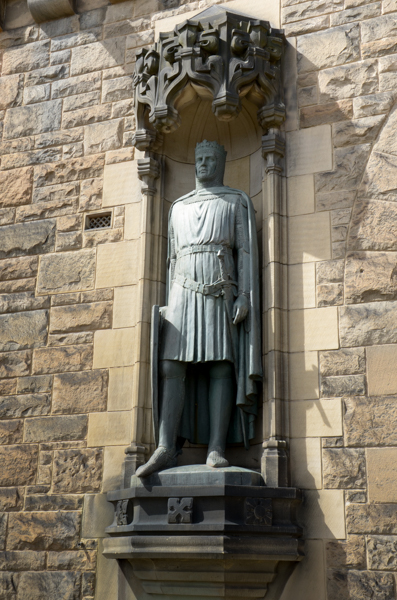 On either side of the gate leading into the castle is a statue. This one, on the left, is Robert the Bruce. On the right is William Wallace, AKA Braveheart.

Throughout our visit in Scotland the guides ruefully acknowledged the Mel Gibson movie, which played fast and loose with the facts. Following Shakespeare's lead?

The bare facts are: Edward I of England attempted to seize suzerainty over Scotland by installing a puppet king. The Scots rebelled, led by Wallace among others. Hostilities continued into the reign of Edward II. During this time Robert consolidated his leadership of his countrymen through battle and diplomacy and was declared king. The final result of his efforts was the Declaration of Arbroath, which prompted the pope to send a "cease and desist" order to Edward II. Robert I thus became the first king of a unified and internationally recognized Scotland. 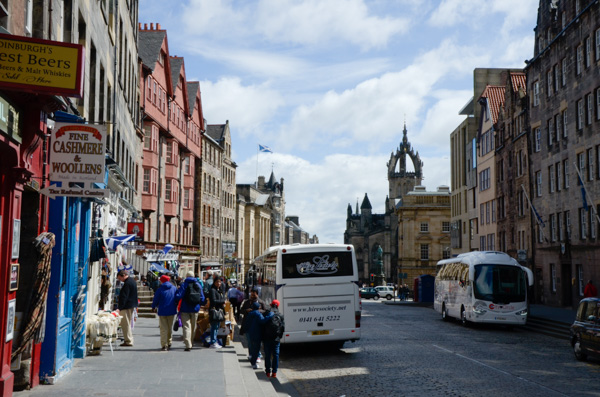 The castle stands at the head of the "Royal Mile," which terminates at Holyrood Palace. We found it to be a mile-long tourist trap. Cashmere and woolen shops were every few feet. Tourists and tourist buses crowded the sidewalks and street. 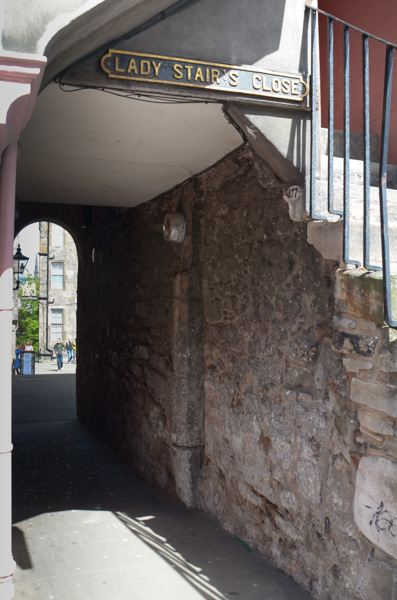 Our guide advised us to check out the various alleys, or closes, that led off the main street. She particularly recommended this one because it led to a well-preserved court where the Writers' Museum is located. According to their web site (we didn't go in) it is dedicated to three Scottish writers: Robert Burns, Sir Walter Scott & Robert Louis Stevenson. 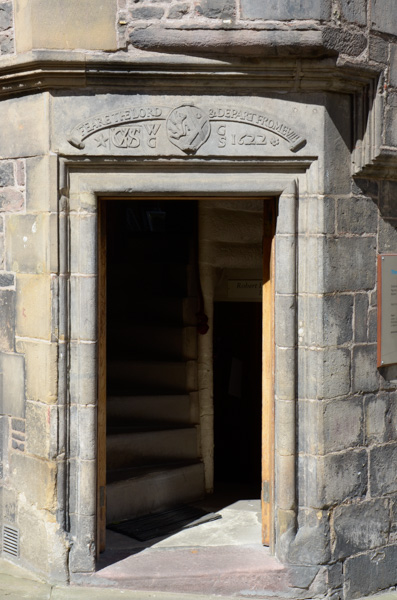 The museum is in Lady Stairs' house, built 1622. The door lintel has a forbidding motto: "Feare the Lord & depart from me." I've not been able to find a source for this. The closest is: "To fear the Lord is to hate evil; I hate pride and arrogance, evil behavior and perverse speech."( Proverbs 8:13, New International Version)

Outside the museum the paving stones were engraved with quotations from a variety of authors (NOT Burns, Scott or Stevenson!). 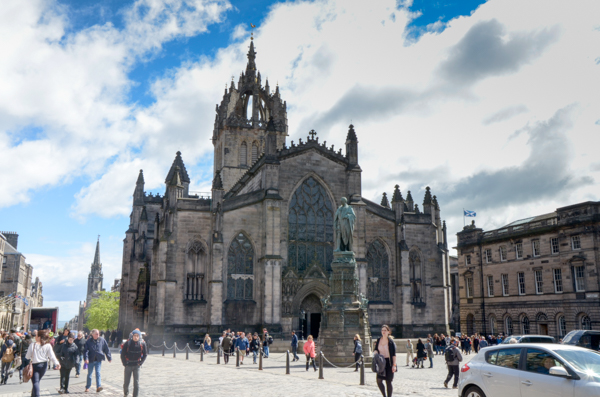 St. Giles Cathedral is one of the churches along the Royal Mile. As a Presbyterian myself I was hitting cognitive speed bumps throughout Scotland whenever a Presbyterian church was called "a cathedral," which implies a bishop. Presbyterians don't have bishops. In this particular case the designation dates from the 17th century when King Charles I appointed episcopal bishops in Scotland.

The building dates from the 14th century although it was extensively restored in the 19th century.

We did not go inside. Pictures may be found at Wikipedia. 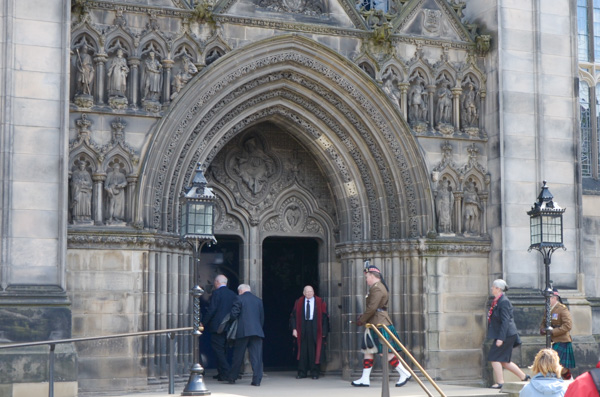 I mentioned earlier that the General Assembly of the Church of Scotland was being held while we were there. As we checked out St. Giles there was a procession of dignitaries entering.

After everyone had gone in and the doors were closed, we asked the gentleman in the red-fronted robes what was up. He told us that there was a special service for the military chaplains who were in town for the General Assembly. 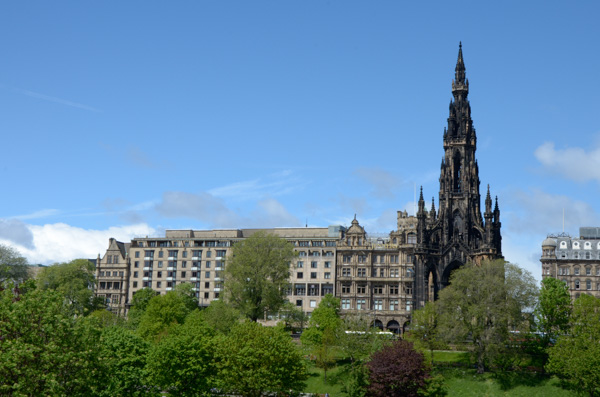 During our wanderings through town we made it down to Princes Street Gardens.

The exceedingly Gothic structure is the Walter Scott Monument.

Although we had meandered down on various streets, we went more-or-less straight back up to the Royal Mile on an impressive stairway that brought us back out to St. Giles. 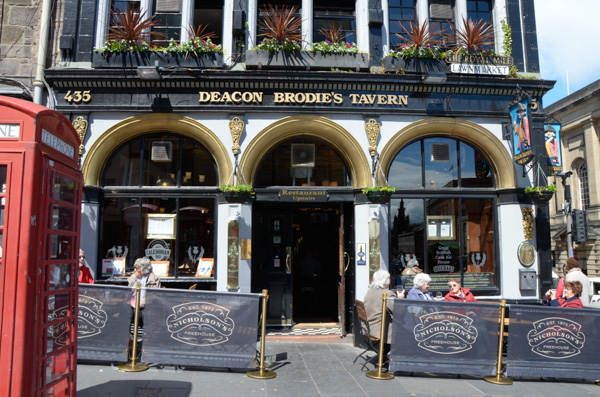 By this time we were starting to think about lunch and a pint. This place was a tourist trap, but they had a Cask Marque imprimatur and that worked for me. The grub was decent and the ale was from St. Austell. We ate in the downstairs pub area rather than the upstairs dining room and enjoyed it very much.

Deacon Brodie is supposed to be the model for Stevenson's Dr. Jekyll and Mr. Hyde. By day he was a model citizen, but by night he was a gambler and thief. He was hanged in 1788 near this location.

There is no indication that the tavern had anything to do with him other than co-opting his name. 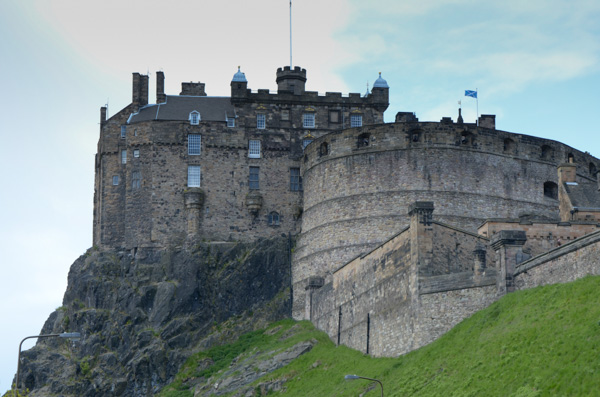 After lunch we gathered again for a session at the University of Edinburgh.

While waiting for the bus to arrive, I walked down and got this view of the castle, which clearly shows the rocky base of the fortification. 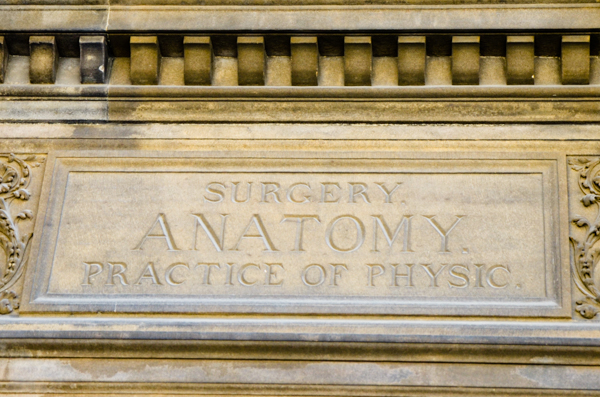 Yale and the University of Edinburgh have an association that enabled us to hear a presentation at the University on the Lockerbie disaster by Anthony Busuttil, Emeritus Professor of Forensic Medicine. Dr. Busutil was the forensic pathologist responsible for identifying the victims.

The presentation was at the old medical school. 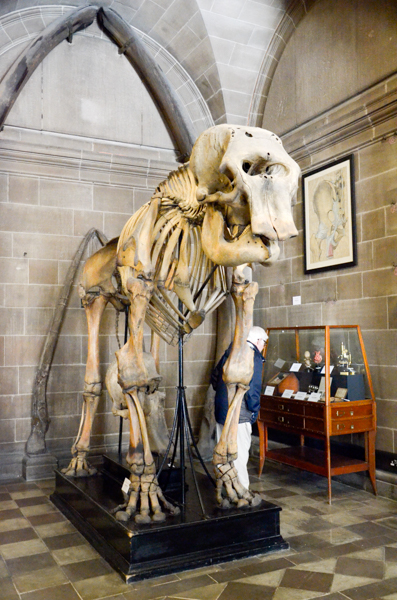 A small museum outside the anatomy lecture hall contained, among other oddities, this elephant skeleton. Those front feet really look like hands, don't they?

Behind the skeleton are the arched jawbones of a couple of whales. 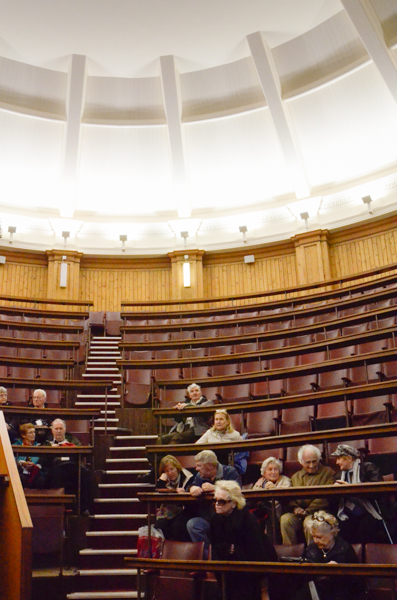 The medical school at Edinburgh University has moved to another location. The old anatomy lecture facility is like something out of an old movie.

Dr. Busuttil spoke of the logistics of collecting the passengers' remains and the various pieces of the plane that were scattered over many square miles. Without modern DNA technology, he had to identify the 270 victims using dental records, x-rays, and other techniques. The job got done in almost all cases.

Dr. Busuttil apologized for some of the graphic images, although they were not nearly as gruesome as what we see most nights on network TV. It was a fascinating session – albeit somewhat sobering just before climbing on a plane for a trans-Atlantic flight! Somehow I didn't resent the security measures nearly as much the next day! 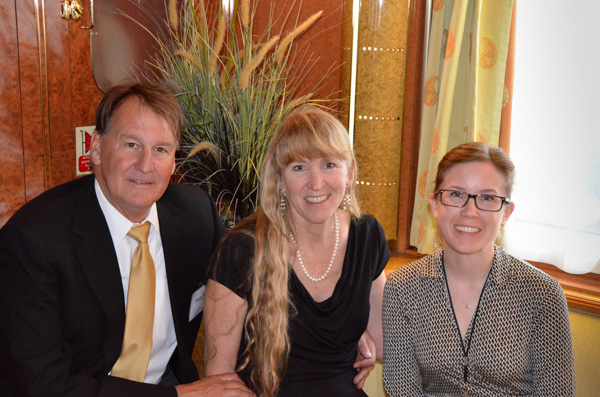 Our tour staff: Harry, Barbara and Nancy. They did a great job of putting together an interesting program and herding us all through. I don't believe that they mislaid a single traveler!

We were delighted to travel again with Harry and Barbara on a trip to the Persian Gulf states. 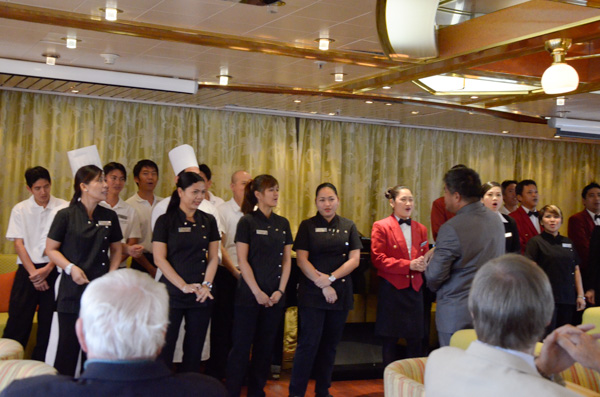 During the farewell party the ship's staff came together to sing for us. They were cheerful & competent throughout the voyage. We felt well cared for.

It would have been impossible to get pictures of all our fellow travelers and I didn't try. It was an interesting group! Perhaps our paths will cross again some day. 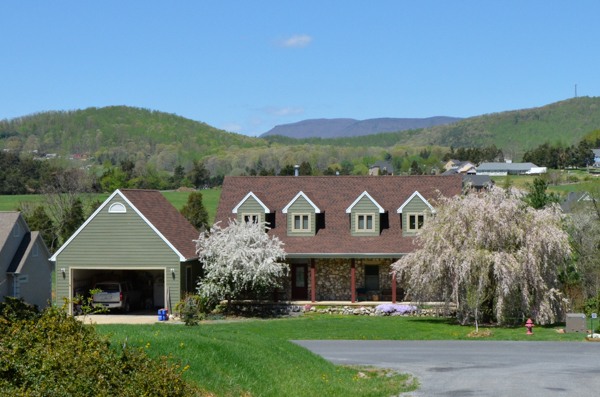 Our trip home was pretty uneventful (except for a delayed plane from Newark to Washington). Because of the delay, our friend Melissa graciously invited us to spend the night at her house. She even cooked us a yummy supper again in spite of our attempts to treat her!

As usual, we feel that the main purpose of travel is to better appreciate home. In keeping with the unseasonable weather in the British Isles, Virginia had a remarkably cool and late spring. This was the first time since we've lived here that the weeping cherry and the crabapple had blooms at the same time (although the cherry was starting to fade).