Before departing for the Faroe Islands, our much smaller group had time to tour Edinburgh and environs. 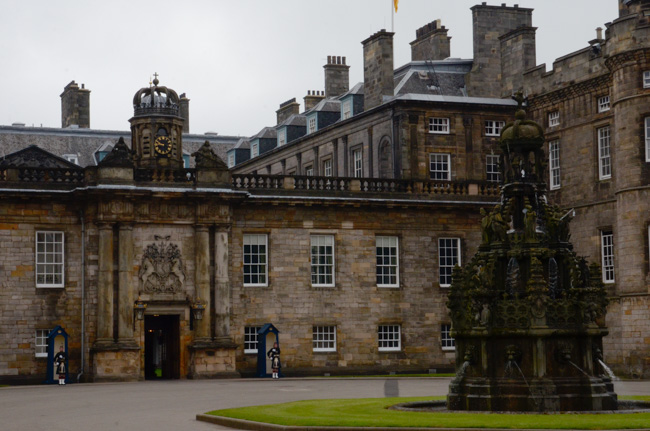 We were visiting Edinburgh at the time of the General Assembly of the Church of Scotland. That meant that some sights were closed, such as Holyrood Palace. We had to be content with peering through the gates -- although the gift shop was still open for business. 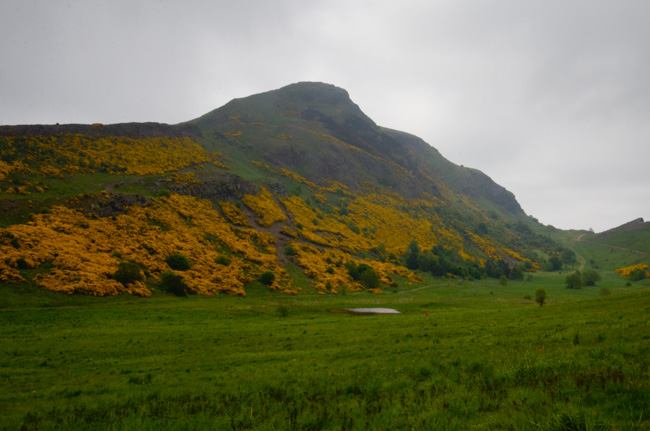 I was thrilled that we would not be spending our time in the tourist mills of the Royal Mile. Instead we hiked around Holyrood Park to learn about the area's geology. Arthur's Seat is the core of an ancient volcano. There is no agreement about the source of the name -- some think it a reference to King Arthur while others believe it to be a corruption of a forgotten Gaelic designation.

Alas, we didn't have time to climb to the summit. 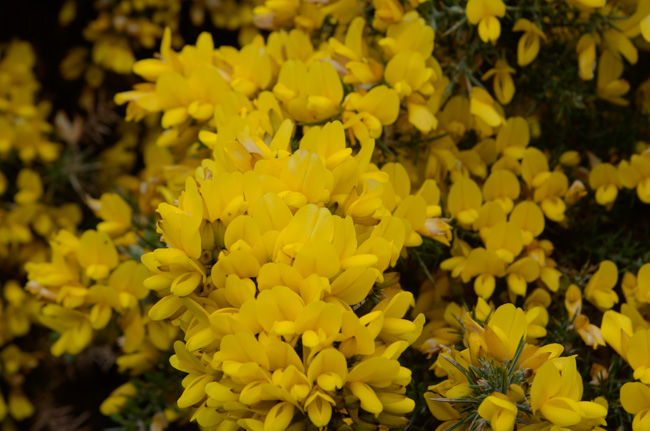 Gorse, also known as furze, was in bloom throughout the park. It is lovely from a distance but has evil spines. I had the misfortune of having to hike through a small stand once and I hope never to repeat that experience. 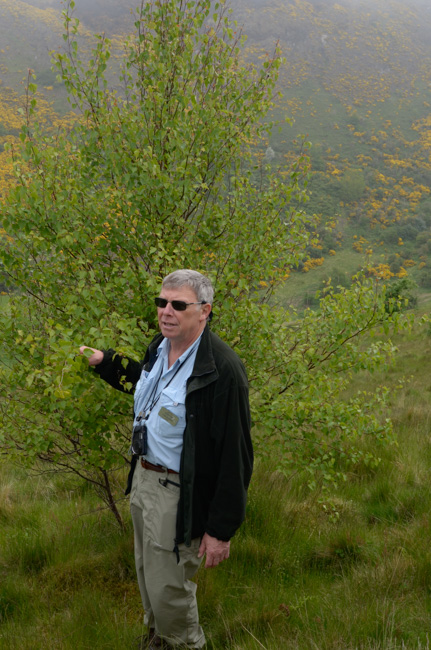 Although most of the staff departed in Aberdeen or Edinburgh, our extension group was led by Tom Sharpe, geologist, and Jim Wilson, naturalist & ornithologist. They often work together and have a friendly rivalry. ("It's just another rock, Tom. It's just another bird, Jim!") Although Tom was leading our geological hike through the park, he did point out some other natural features, plants and even birds! He made us promise not to tell Jim, though. (This is a young rowan tree.)

Jim had led another group of walkers on an easier trek around the park.

Our geological goal for the walk was this formation known as the Salisbury Crags. It is a sill formation in which magma has forced itself horizontally between existing layers of, in this case, older sedimentary rock. 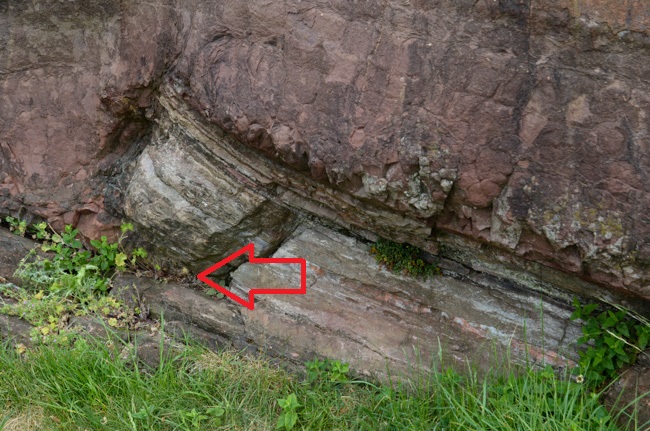 And this is the centerpiece of the Salisbury Crags: Hutton's Section first identified by James Hutton, who is now considered the father of modern geology.

The red arrow points to a intrusion of magma (partially hidden by the greenery) into an older segment of sedimentary rock. This inconspicuous formation revolutionized the way scientists look at the world. 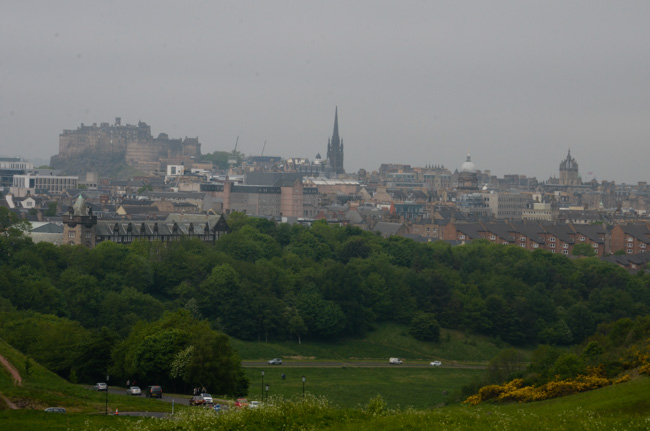 The old town of Edinburgh starts at the castle high atop a volcanic plug and descends on a narrow slope that remained after glacial action stripped away softer rock. This is called a crag and tail formation.

Newer sections of the city are connected to this original spine by bridges. 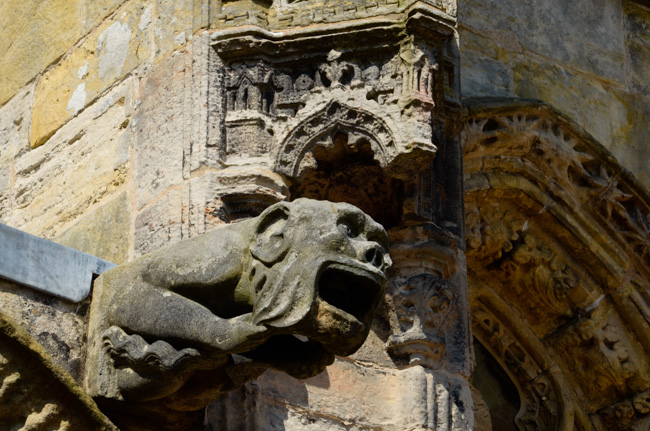 A rather more touristic destination was Rosslyn Chapel. The chapel was started in the 15th century, but never completed. Although it is privately owned, it is still used for worship services. There are some amazing pictures of the interior at the link. Photographs were not allowed inside and the space was too constricted to get good pictures of the exterior. 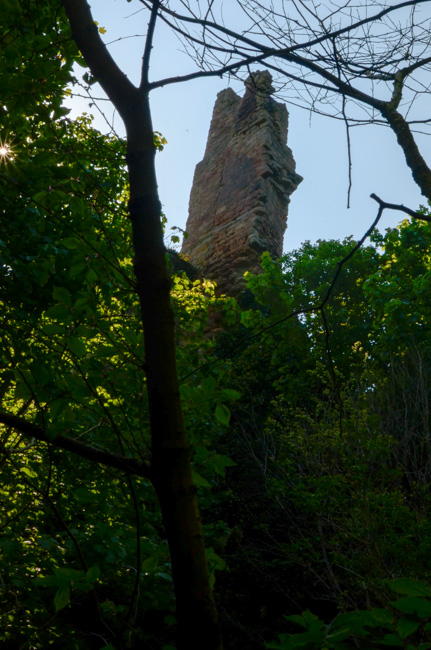 I was excited, not by the chapel itself, but by its proximity to Rosslyn Castle, which has inspired a mournful Scottish air that is migrating into my playlist (the key is a challenging one).

When I asked our local tour guide if she could lead me to the ruined castle, she was puzzled, but convinced when I told her about the tune. Unfortunately the high bridge where the best view is available was off-limits on that day, but we were able to walk down into the glen for a partial view of castle. (There is a picture of it at the link above.) The Right to Roam doesn't include trespassing beyond closed gates. I didn't have my fiddle, so I hummed the tune for her.

We went from the chapel to catch our flight for the Faroe Islands.