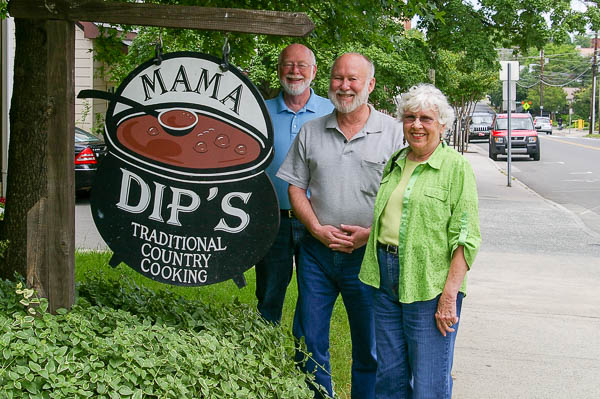 Our first stop was Durham, NC, where we visited with ME's Pease cousins. No picture of Jim & Wendy Pease, but here's one of Hop & Betty Pease Hopkins with Jim. The Peases were always the "Connecticut Cousins," but now they are the "North Carolina Cousins" except for brother Fran who lives in Kansas nowadays.

Mama Dip's was a mighty fine place to have lunch. Good southern cooking!

We had a great time seeing the Peases again and catching up with times old & new. 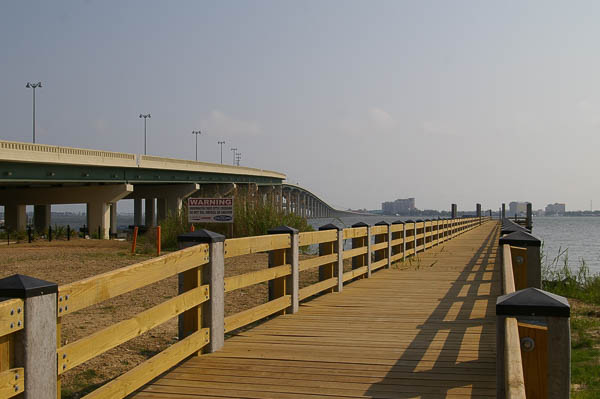 From Durham we made a swing through SC for a brief visit with friend Ronni Gardner and then headed to the Mississippi Gulf Coast.

Jim had not been there since Katrina. Pictures from a long-ago vacation show this area before the storm, and there are also some pictures showing the destruction.

This wooden pier is located at the site of the "old" Ocean Springs bridge ruined by Camille. Part of it had been left for fishing and crabbing purposes, but Katrina wiped it from the face of the earth. The replacement pier wasn't open yet, but it will take over fishing and crabbing duties.

The "new" bridge had also been destroyed, but there is now a "newER" bridge in the background. 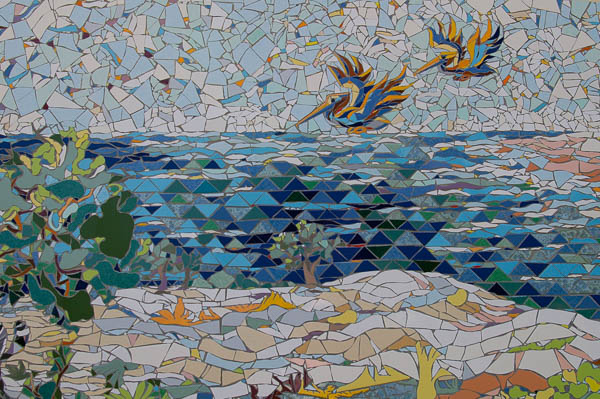 On the far side of the new bridge are several mosaic panels depicting Gulf Coast nature. These call to mind some of the work of Walter Anderson.

We had been trying unsuccessfully to find Shearwater Pottery in the maze of Ocean Springs streets. We met some helpful policemen here at the bridge who gave us directions.

We were glad to see the pottery back in operation after the hurricane and bought a pot for Jim and a crab print for ME. 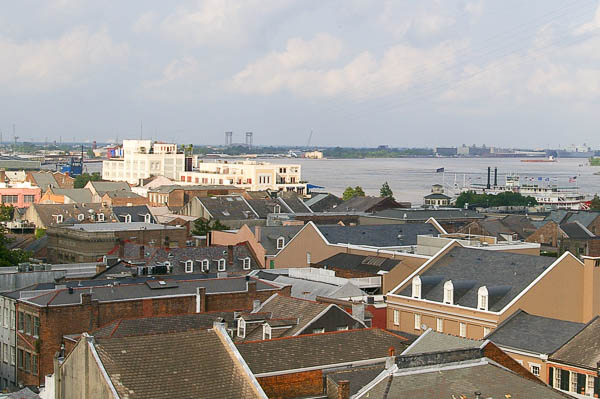 In New Orleans we stayed in the Monteleone Hotel on Royal Street for old time's sake. This was where ME's parents and grandparents always stayed.

We asked at the front desk for a "room above the 5th floor with a river view just like Daddy always had" and they obliged!

Even though the river is lapping at the tops of the levees, it doesn't look any different that it normally does from here..

Neither of us took any pictures at the Rotary convention, which was held at the Morial Convention Center. It is HUGE! The 20,000 Rotarians didn't fill it up so they had booked one or two smaller conventions as well. 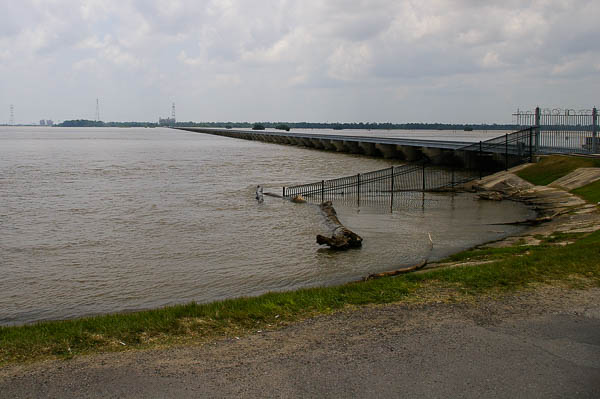 One day we decided to see what there was to see in the neighborhood. Our first stop was the Bonnet Carré spillway. The Mississippi River was experiencing an historic flood and the spillway was opened not long before our visit to release flood waters into Lake Ponchartrain.

We had visited the control structure in 1999 or thereabouts. In normal times there is NO water to be seen in this area. Now there is plenty. 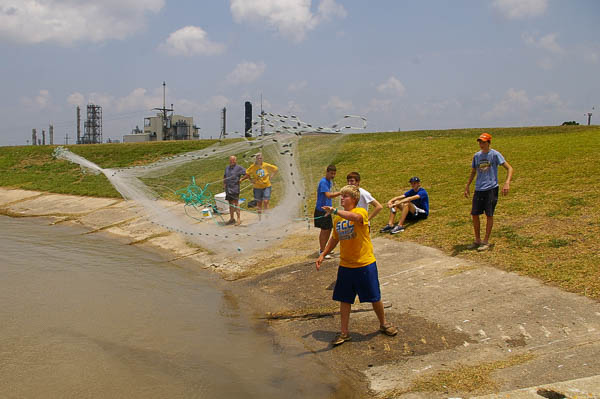 Never ones to let a good fishing opportunity pass, many locals were out looking for a fresh dinner.

The refinery in the background – one of many in the area – is a key reason that the spillway, and its upriver cousin the Morganza Spillway, were opened. 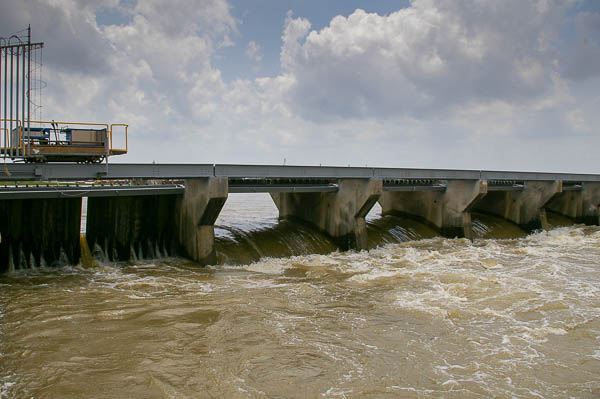 Water pours through the control structure. We chatted with a local couple who came out to view the situation. They said that the word was out that the entire volume of Lake Pontchartrain would be replaced with Mississippi River water from the spillway. It will turn from brackish to fresh with significant environmental consequences.

To put that into perspective, Lake Ponchartrain can be viewed as a cylinder roughly 26 MILES in diameter and 12-14 feet deep. That's a lot of water. 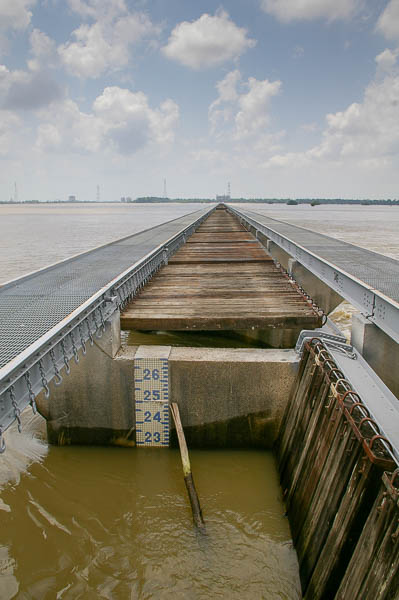 Here is a close-up view of the control structure and the gates. The closest gate is still closed, which enables us to see the depth gauge - 23 feet. Remember that this structure is usually high and dry.

The gates are opened by lifting them to be parallel to the water surface.

Somewhere I have a picture of the structure in normal times – need to find it and scan it in for comparison. 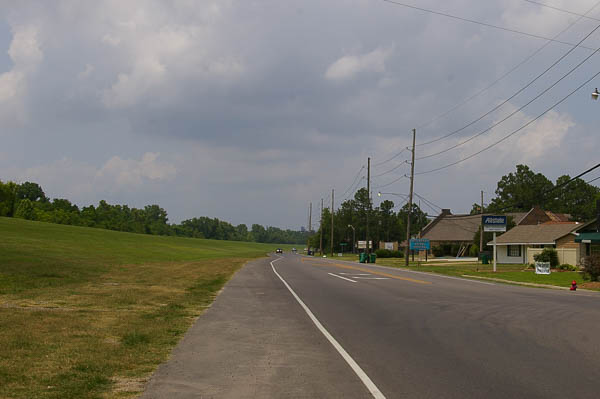 After leaving the spillway, we travelled along the river road back to the hotel. The low rise on the left is the levee.

River levee politics have filled books, but there is a good summary on the web site of the Mississippi Historical Society.

It amazes Jim that people live in the shadow of these levees. Of course in normal times the levee itself is well away from the river. This is not a normal time. 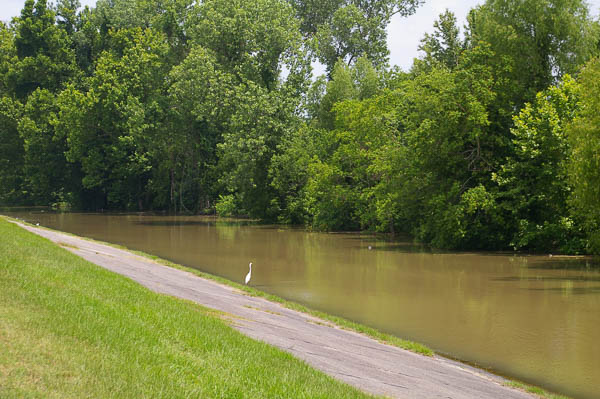 Later we made another stop and I climbed to the top of the levee, which was somewhat higher here than in the picture above. The water has reached the levee, but is nowhere near the top due to the open spillways upriver.

In spite of the bucolic appearance, this is an area of heavy industry. From where I stand I can hear a large ship being loaded just on the other side of the trees. 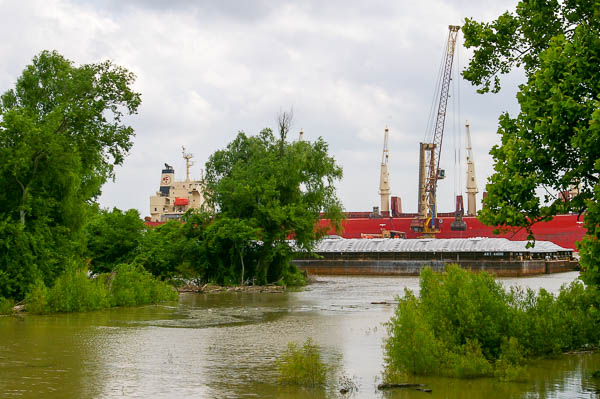 People can say what they like about the futility of trying to preserve New Orleans in a vulnerable situation – someone called it "the inevitable city in an impossible location" – but the fact is that the Port of South Louisiana alone is the largest in the US in tonnage. The combination of the ports of the lower Mississippi (Baton Rouge, South Louisiana, New Orleans & Plaquemines) ranks among the 10 largest in the world.

Too large to write off! 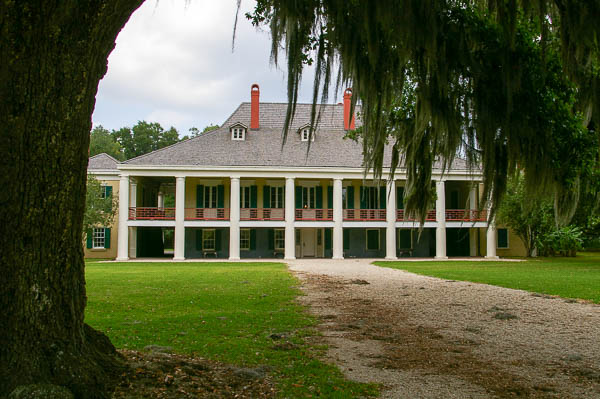 The Destrehan Manor House, built prior to 1790, is across the street below the levee. It reminds us that this area has survived floods and hurricanes for many years.