We reluctantly bade goodbye to Ushuaia to fly to Bariloche, Argentina. Jim and I had visited Bariloche some years earlier on a ski trip with our friends from Potomac Valley Skiers. It is a lovely lakeside town that was originally developed by the Swiss. As such, it has a distinct Swiss flavor. Prior to that the area was said to be one of the haunts of Butch Cassidy and the Sundance Kid. 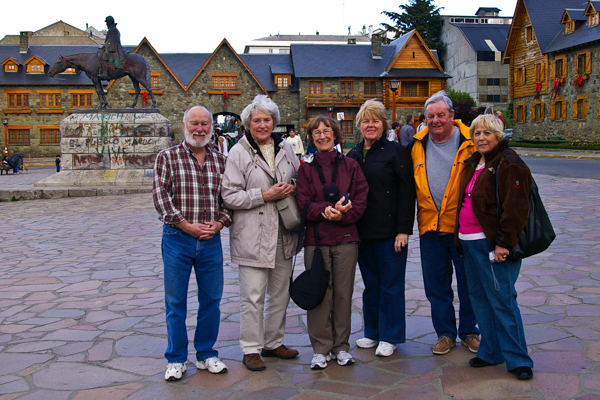 We didn't have much time in this charming city, but we did get in some shopping and a visit to one of the local chocolate factories.

In the morning we took to the water again on a series of boats and buses that took us across the Andes to Chile.

We had heard about this crossing when skiing in Bariloche and had in fact taken the trip as far as the Chilean frontier. It was one of the reasons we chose this particular tour package.

Unfortunately we were traveling in a rain forest and rain it did. It poured throughout the day, which didn't make for good picture taking of the mountains or the beautiful lakes.

The crossing route is operated by a private company. It's possible to travel in either direction and the trip can be made in one day, like we did, or two. Most of the travel is via boat, but we crossed the spine of the mountains by bus.

There were many unusual plants. Click for my favorites.

While we waited for paperwork to be completed at the border, I wandered around to look at the scenery through the drizzle.

The mountains were alive with water - rivers, lakes and waterfalls - everywhere I turned.

This is Rio Puella. The town at the mouth of this little river was where we had lunch. It is the stop-over for the two-day crossing. 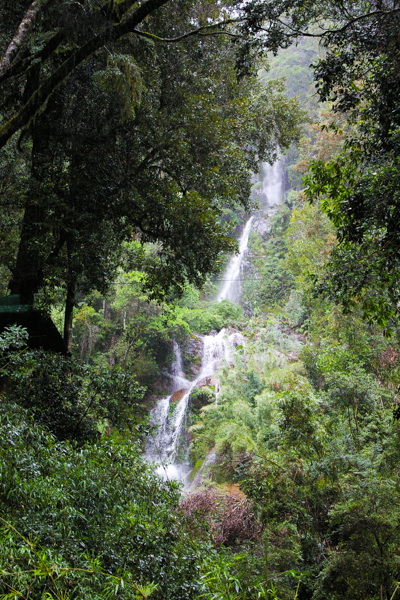 After lunch we had a few hours before our scheduled departure. Being heartily sick of sitting in buses and boats, I decided to hike up to the local waterfall - naturally named "Bridal veil."

It was a delightful hike, even in the rain, but I was unable to convince any of the others in our party to come along. Just as I was about to begin the climb up to the top of the falls, I heard Jim calling me. Because of expected rough weather our boat was leaving much earlier than scheduled and he had come to fetch me back! We had a quick trip slithering down the muddy mountain trail to Puella in time to catch it.

As it happened, the weather was indeed rough on the lake. It wasn't the Drake Passage, but there were some impressive waves.

After leaving the last lake in the crossing we climbed onto yet another bus for the trip to Puerto Varas, where we would be staying two nights.

We stopped at a park where a nice walk led to this lovely waterfall. The water is bright green like the water of the lake we had just crossed.

Puerto Varas is on the shores of lake Llanquihue with the Osorno volcano in the background. As is usually the case, the mountain was crowned with clouds. I was glad to have gotten this picture in the early morning because later in the day it was completely socked in. 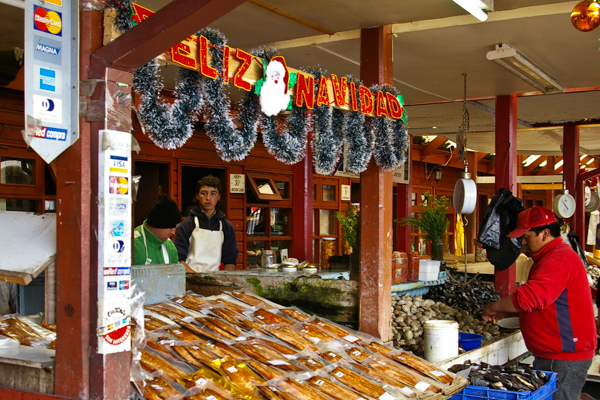 One of our excursions was to Puerto Montt, on the Pacific coast of Chile.

The Angelmo market was, to me, the high point of the city. Unlike most fish markets I've visited, there was absolutely no "fishy" odor. Everything was sparking clean and fresh.

Our guide even sampled some of the raw shellfish delicacies and offered them to us. Others accepted, but I'm no fan of raw shellfish under any circumstances. Now raw beef is another story. Yum!

Another stop on our day excursion was Frutillar on Lake Llanquihue.

We enjoyed walking around the German Colonial Museum, which is where I took this picture overlooking the lake and the Osorno volcano, currently hidden in the clouds.

At long last our trip was at an end.

We had some last-minute excitement when we discovered that the airline scheduled to take us from Puerto Montt to Santiago had ceased operation! But our intrepid tour leaders worked through the night to make alternate arrangements and we were able to make our connections.

(The change from mid-summer in the southern hemisphere to mid-winter at home wasn't quite as drastic as this picture would suggest. It was taken a year later after the December 2009 blizzard.)