View pictures from Buenos Aires and the Falkland Islands. 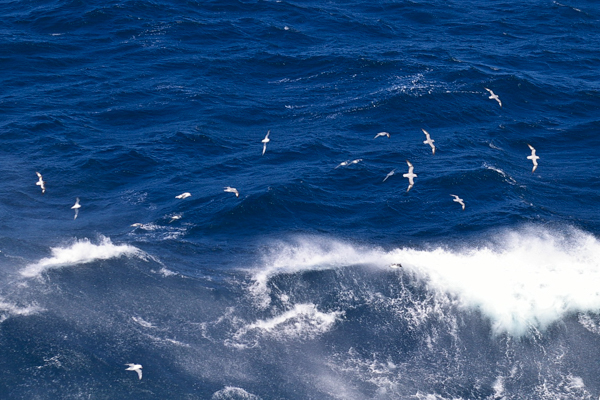 After leaving the Falklands, we endured, er, enjoyed two days of cruising across the infamous Drake Passage.

We were told that our crossing was very smooth - relatively speaking. Nevertheless I was glad for Dramamine. Barf bags were liberally festooned around the ship and one of our number pretty much kept to her cabin.

Always in Antarctic waters we were escorted by numerous sea birds like these Antarctic fulmars. 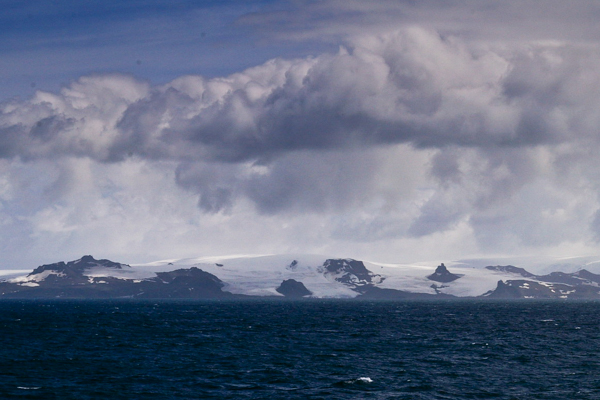 At this point we are cruising in the South Shetland Islands along the Antarctic peninsula. We were thrilled to be in calm protected waters once again.

The weather was highly variable, but wind and clouds were always present. 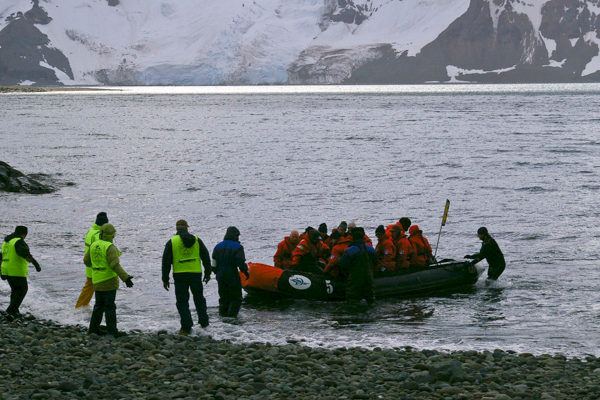 Our first stop was Arctowski Station on King George Island. The winds were so strong that for a while it appeared we would not be able to land. And we were pretty damp from wind-blown spray by the time we did.

This island is home to a rookery of Adelie penguins. The number of people who could be ashore at any one time was strictly controlled.

We were not allowed to visit the actual rookery, but we could walk along a treacherous cobble beach to its edge. One passenger fell on the cobbles and broke her arm. It took the crew over an hour to evacuate her in a Zodiac. Ouch! 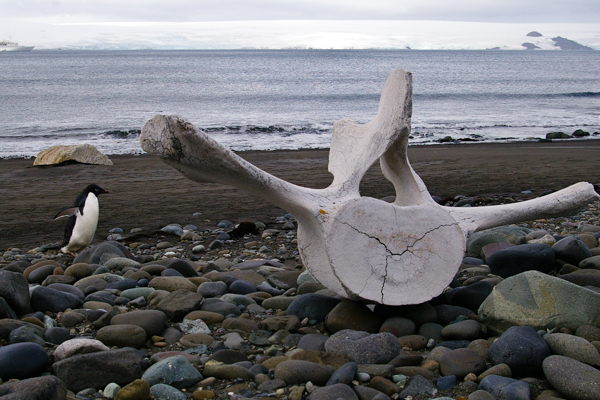 Most Antarctic peninsula sites have a whaling past and this one is no exception.

The bone is from the spine of a large whale. There were still a few such bones scattered around. We were told that at one time the beach had been littered with them, but time and tide (and souvenir hunters) had taken most of them.

We were given strict instructions about yielding right-of-way to penguins. 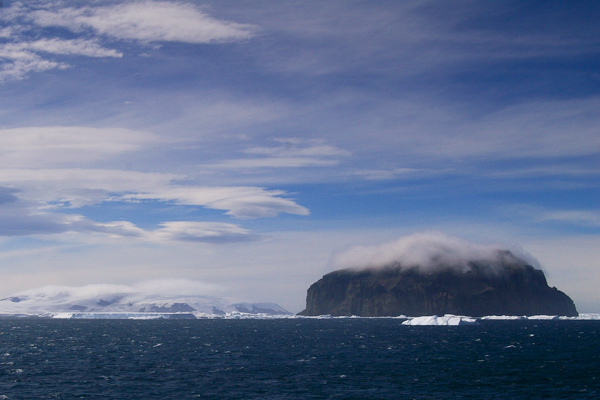 Our next day was spent cruising though the islands and bays of the peninsula.

This cloud-capped island is an enormous lava plug left from the days when this was a volcanically active region. (There was a similar, but much smaller, formation at Arctowski Station.)

I loved its cloud cap. 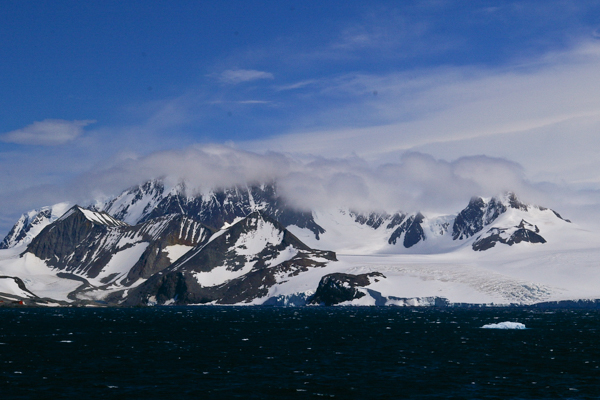 Hope Bay is the location of Argentina's Esperanza Station. This is where the first "native" Antarctican was born in 1978. 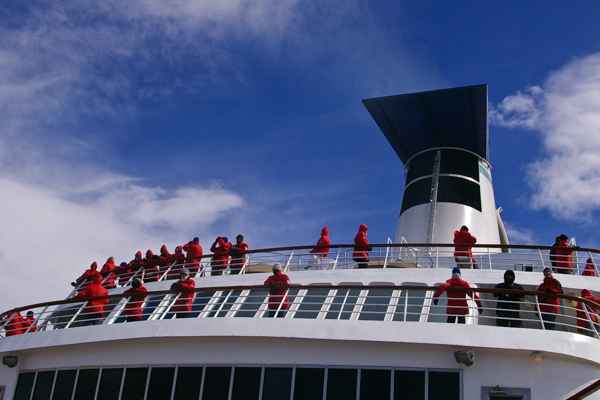 Even with the wind and cold every deck had its share of observers with the standard-issue red parkas.

These parkas are not finely made, but they are warm. I'm still (in 2019) using mine on bitter days. 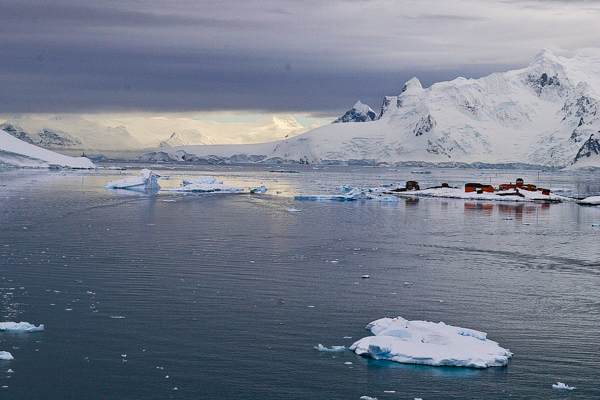 The following day we visited a Chilean research station at Waterboat Point in Paradise Bay.

We had planned to come from the opposite side of the point, but ice blocked the way. Discovery is a single-hulled vessel and could not risk passage.

In fact we were told that due to stricter regulations this would be Discovery's last season in the Antarctic. We were lucky to catch it. During the time of our trip there were two ships that ran into trouble with the ice. One had to be evacuated. 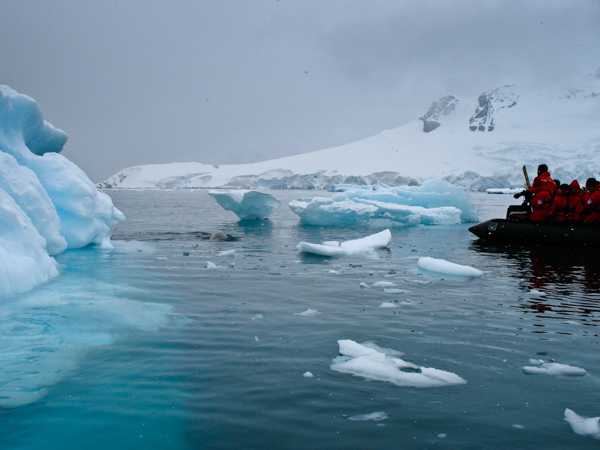 The ice was definitely crowded around our landing place.

The intense glacial blue is due to the pressure under which the ice is formed over centuries in the glaciers.

Chunks of ice larger than our Zodiacs are called bergy bits while smaller ones are growlers. And then there is brash ice. How many words does an Antarctic researcher have for ice? 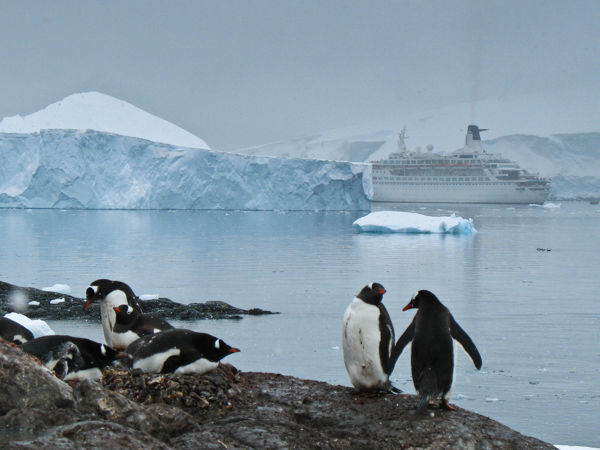 Waterboat Point is home to a large colony of Gentoo penguins. They are clustered right around the research station and we could walk among their nests.

We had heard a lot about ice conditions, but had not expected our ship to be rushed by a large iceberg caught in the strong tidal bore. The ship, which never dropped anchor for any of our landings, had to dodge out of its way.

(Perspective makes the berg look larger than the ship, which it was not, but it was big enough!) 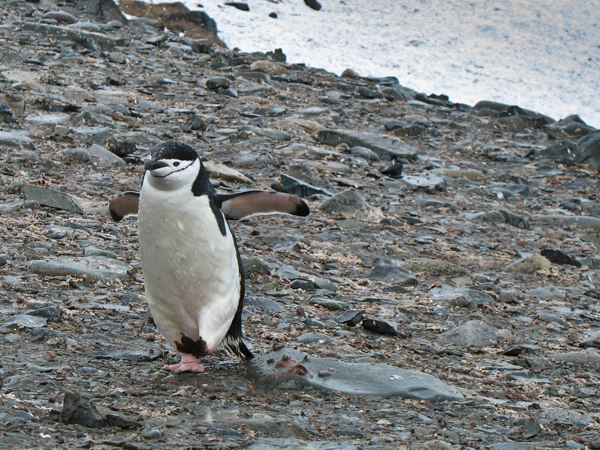 To round out our collection of penguins, we visited Half Moon Island and its colony of Chinstraps.

I found these to be the most charming of the penguins we saw in Antarctica. They were friendly and playful. Even though the rookery was as noisy and stinky as the others, the individual birds were cleaner. They seem to enjoy a regular bath in the sea separate from the necessary foraging for food.

After our visit here, it was back across the Drake Passage to Tierra del Fuego where we would bid Discovery adieu and seek new adventures. 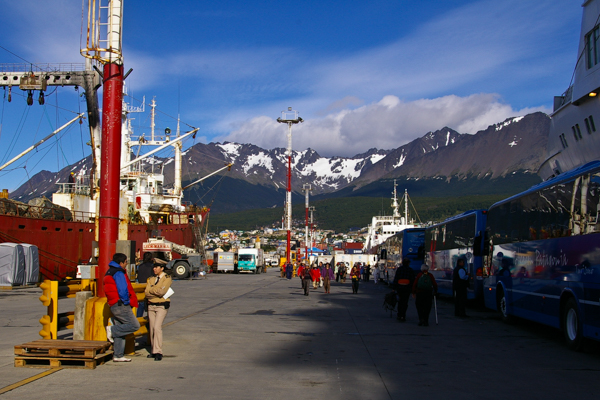 Ever since the elementary school geography lesson where I learned of Magellan and his passage through the "Land of Fire" I've wanted to visit.

He didn't see anything like this bustling port. Ushuaia isn't dependent on the tourist trade. There is substantial industry, which accounts for the cargo vessels. They outnumbered the tourist ships by a wide margin. 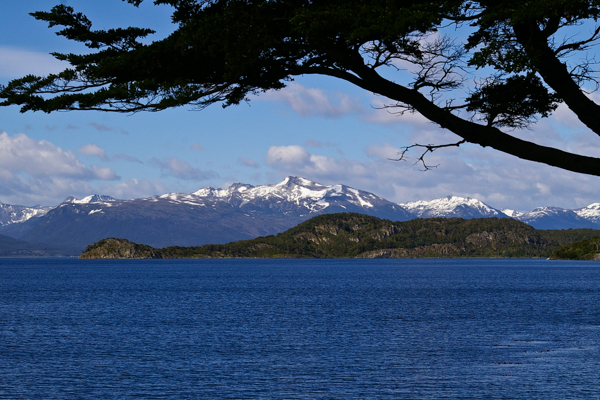 Although we only spent a day in Tierra del Fuego, I am including a disproportionate number of pictures for a couple of reasons.

One is the long-standing fascination mentioned above. The other is the wild beauty of the place. Besides, there are bunches of other places where you can see pictures of penguins and ice.

Ensenada Bay is on the Argentine side of the Beagle Channel. The snow-capped mountains in the background are in Chile. 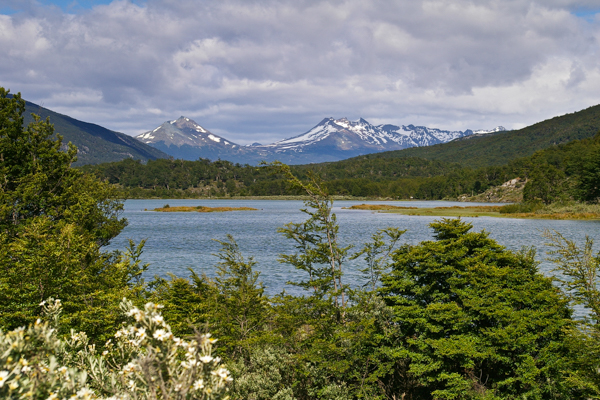 I looked longingly on the hiking trails along the bay, but it was back on the bus to  Tierra del Fuego National Park.

This lovely lake also had hiking trails - and campgrounds - and a visitors' center with a small museum.

Someday I hope I can return to this fabulous island for a much longer stay.

The snow-capped mountains here are the southern-most tip of the Andes Mountains. Keep in mind that it is now mid-summer.

We'll be crossing the Andes later in the trip. 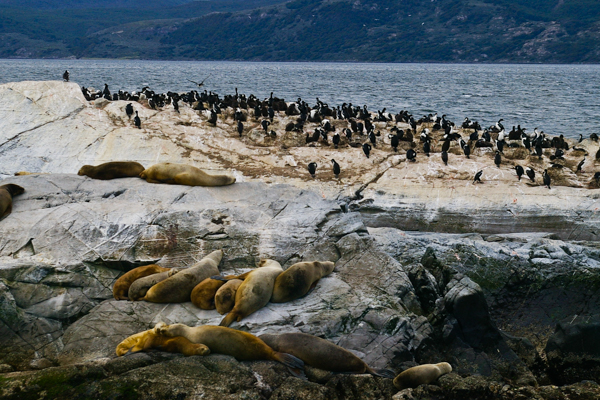 After returning from the park we enjoyed a catamaran tour of the Beagle Channel. There are many rocky islets that are home to colonies of southern sea lions and king cormorants.

The birds were very busy creatures; the sea lions appeared to be alive - but only just. Zzzzz.

In Antarctica we were told that the Weddell seals were nicknamed "slugs on ice." There is a clear kinship with these cousins.

Continue reading about our visit to Chile.