After we returned to Virginia from California and purchased the farm, we quickly learned the value of a barn cat. Mice and other vermin proliferated. Muffin, our house cat, was too old to take over barn cat duties, so what to do?

One evening as we roasted chile peppers from our garden (hence the name), a small but burly smoke-gray tomcat strolled onto the porch, jumped up onto the picnic table, laid down, and projected the unmistakable message: "You may adore me now." Of course we did!

After several days he had no notion of leaving, so we posted fliers at the local store and telephone poles. We even put a notice in the local paper, but there was no response. I called the animal control folks to see how long we should continue to advertise before claiming him for our own (or vice versa). They informed me that all stray animals are the property of the county. I should bring him to the shelter, and after a week or two, if no one had claimed him, I could pay them $45 to get him back. *IF* we were approved adopters. Hmmm. I said I'd be in touch. From that minute we figured he was ours and took him to our vet to be castrated. In spite of this he forgave us and stayed.

As it turned out, Chile was no mouser -- even though he really was adorable. In time we adopted a hard-working queen, Sassafras, from the local no-kill shelter to take care of the vermin.

When we sold the farm, our new home was not suitable for cats. The folks who bought the farm, were cat people and happy to have such capable kitties in residence. Unfortunately, about a year after we moved, they told us that Chile, who was rather arthritic (in retrospect, I think he probably had contracted Lyme's disease before they finally made a suitable tick repellant for cats), had become sufficiently crippled that they had to put him down. 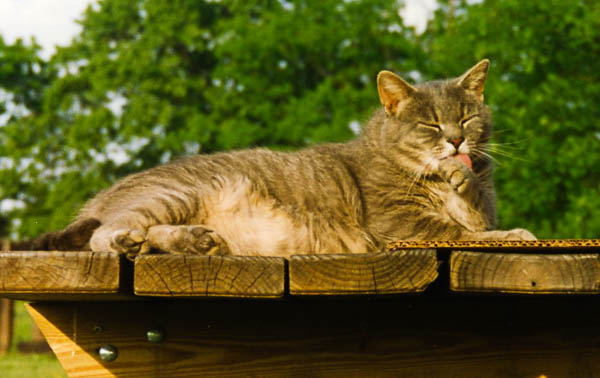 This is Chile's "You may adore me now" pose.

He was a character (aren't all cats?).

Before we acquired Sassafras, Chile lived in the barn alone. Jim didn't build the "Kitty Kondo" with heated bolt holes until later. In the meantime we had a snug nest for Chile next to the barn's hot water heater. I don't think he suffered from the cold.