From the program materials:

We will drive to Quinta da Aveleda with a local expert. This family-owned property is known for its lush parks and gardens, where rare species of trees flourish, many of which date back over a hundred years. Aveleda is also at the heart of the Vinho Verde Demarcated Wine Region, and we will have the chance to taste the white wines produced on site. 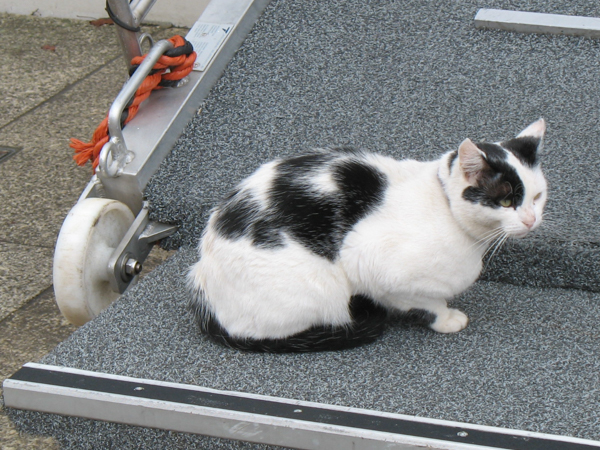 The tours didn't leave until 10:30 so I enjoyed a walk around the village of Entre-os-Rios.

This very friendly cat greeted us at the dock. We discovered his name was 'Pirate' because of the black patch over one eye, and he meets all the boats. One of the ship's staff said she was going to steal him one of these days. He reminded me of my old friend Baba Ghanouj. 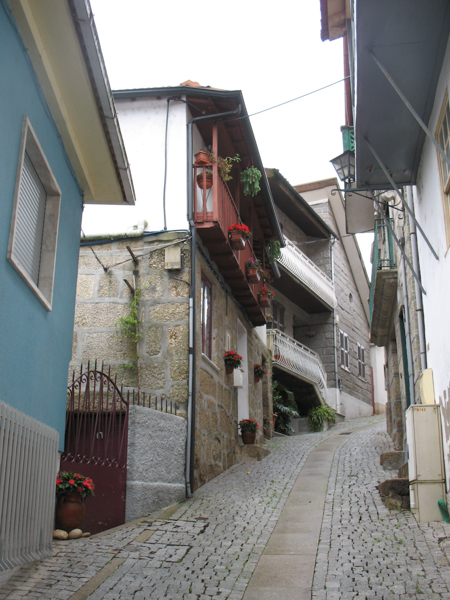 Steep streets led up from the river.

I was surprised to find a garage tucked under the house with the white balconies. The notion of backing out of the steep tiny space into the steep narrow street was daunting. I doubt there would be much traffic, but I could be wrong. 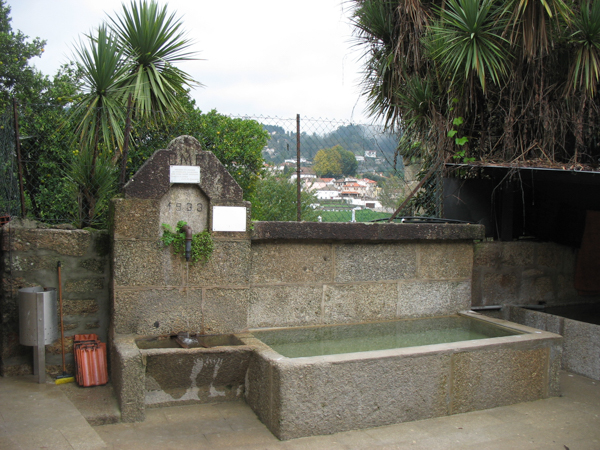 This communal wash-a-teria had a date of 1933. During much of the 20th century Portugal was a poor and chaotic country. This may have been the height of efficiency at the time it was created. There was an even larger "rinse" pool under cover to the right.

I don't know if it is used at all at present, but the adjacent sign said kitchen utensils were prohibited so it may be. 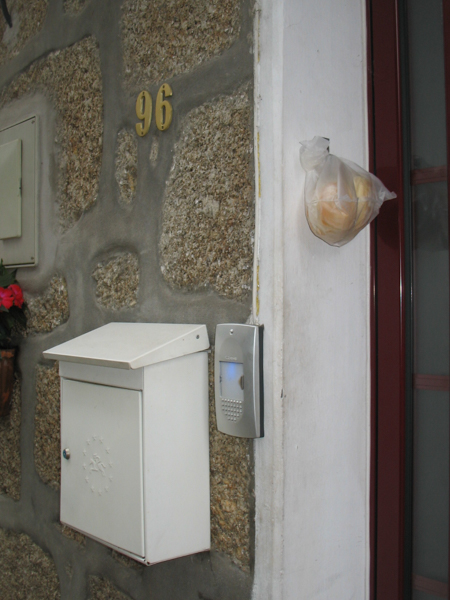 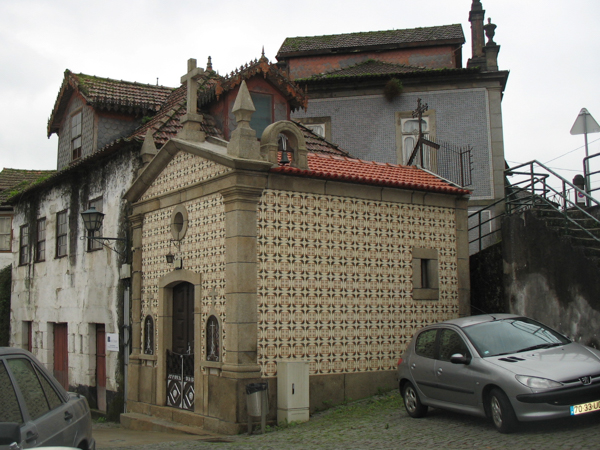 A small chapel on the edge of town was covered with ceramic tiles. Glazed tiles are a common siding material on the houses throughout the Douro valley, but this was the only good picture that I got. 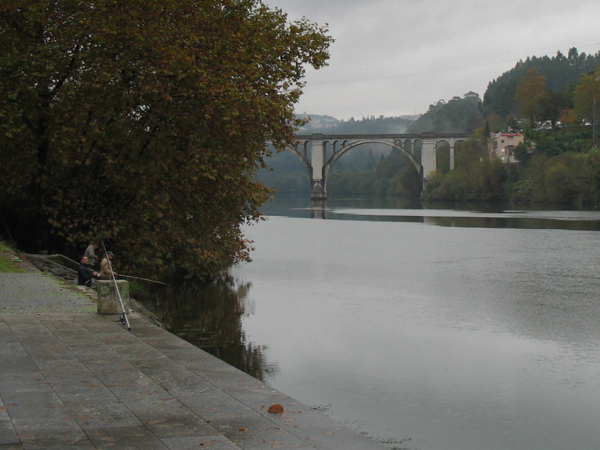 I passed several fishermen on the side of the river as I returned to the ship. 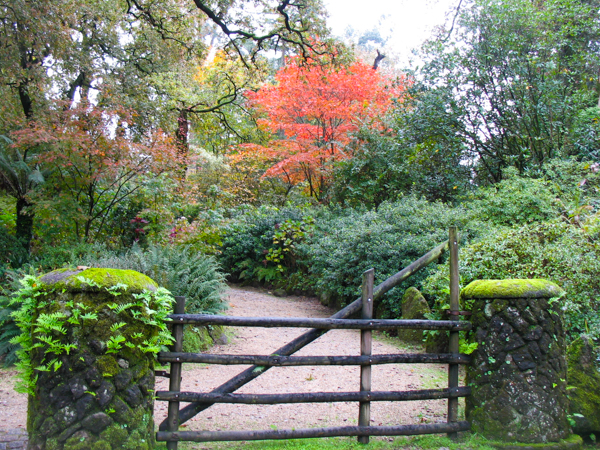 Our final day's excursion was to Quinta Da Aveleda -- a wine estate and garden.

It was a fitting end to a wonderful trip.

The garden and estate were lovely, the food was delicious, and the wines were good too!

Our visit started with a tour of the garden. Our guide said that spring was the favorite month for tours because of the azaleas, but we think the fall colors are pretty nice too. 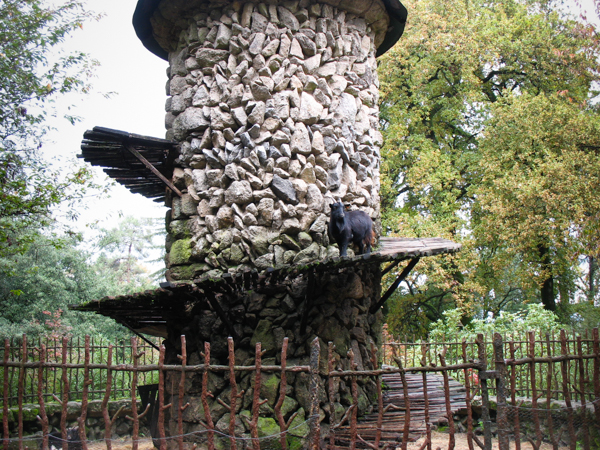 There were a number of garden follies around, but none as unique as this goat tower!

The miniature goats were very friendly (or greedy). The little guy had fun trotting up and down the ramp. 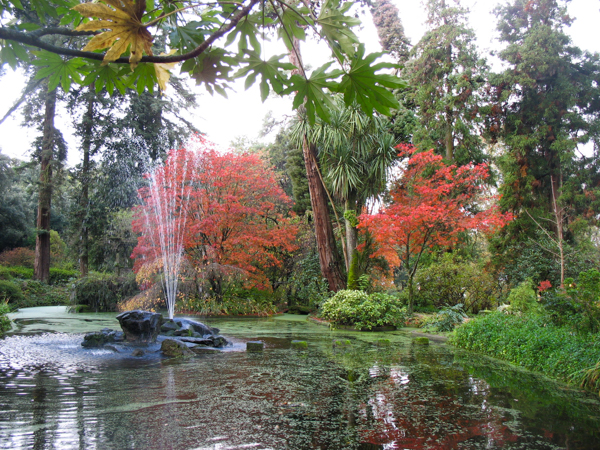 A small teahouse on an island overlooked this pond and fountain. The interior of the house was decorated with taxidermy of deer, snakes, and other creatures that we felt might have been a bit intimidating for afternoon tea. 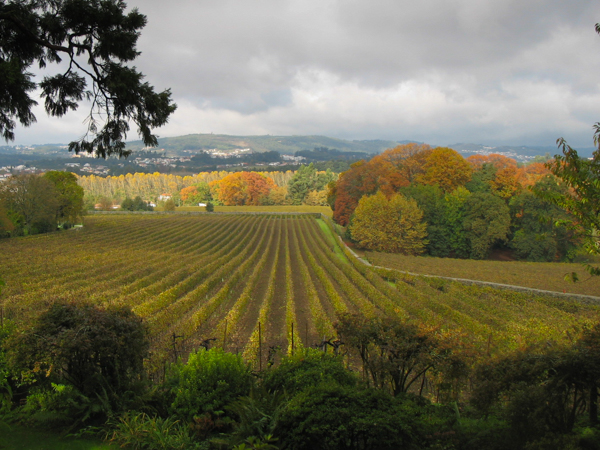 A view of the nearby vineyards. 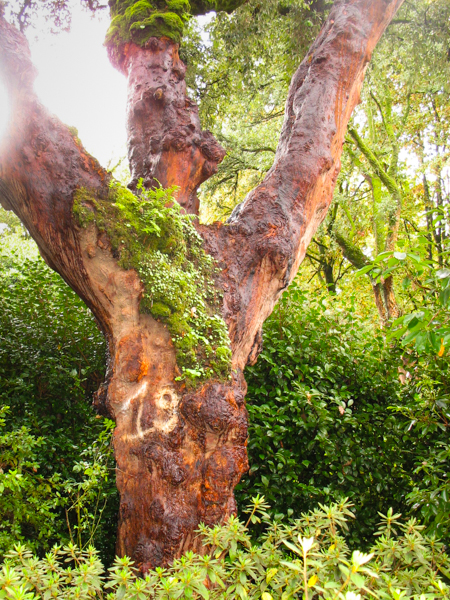 This is what a cork oak looks like after its bark has been harvested. The locals say that it is blushing because its "clothes" have been removed. It does look rather naked with only a moss boa for modesty's sake.

The "19" painted on all the trees documents when they were harvested. They will be eligible for another strip-tease in 9-10 years. 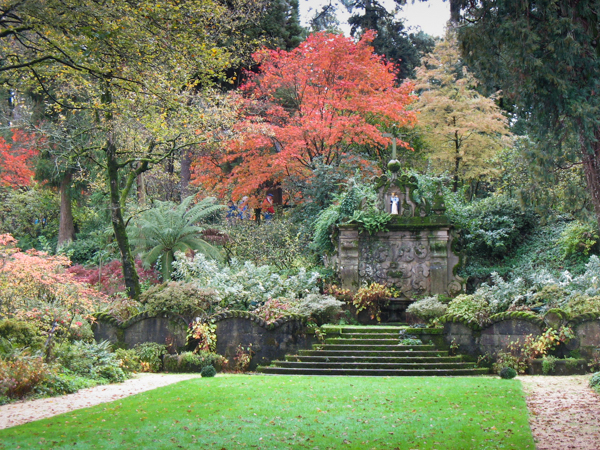 This section of the garden is the traditional spot for family weddings. Our guide said that the younger generation at present is quite young, so no weddings are in the near future.

Although portions of the estate are available for rental, this garden is reserved for family. 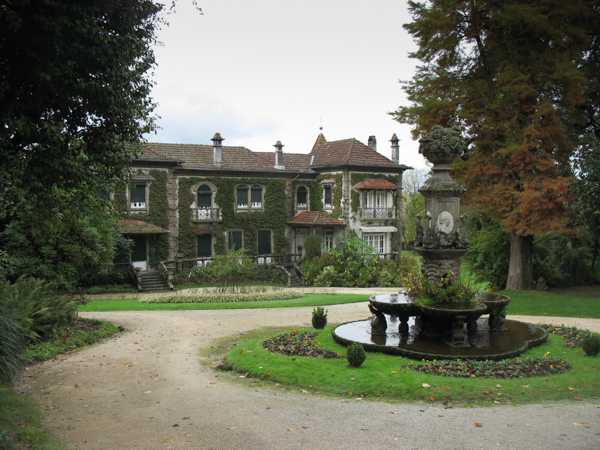 When the family is in residence, they stay here. It is a favorite place for the younger generation because they have the entire estate for a playground. 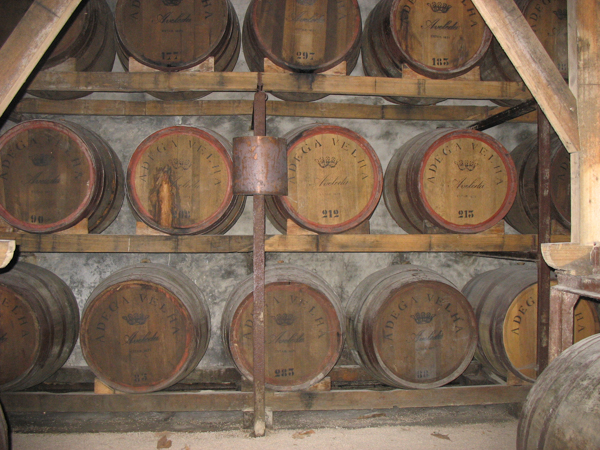 Wine aging in a warehouse that seemed to go on forever. 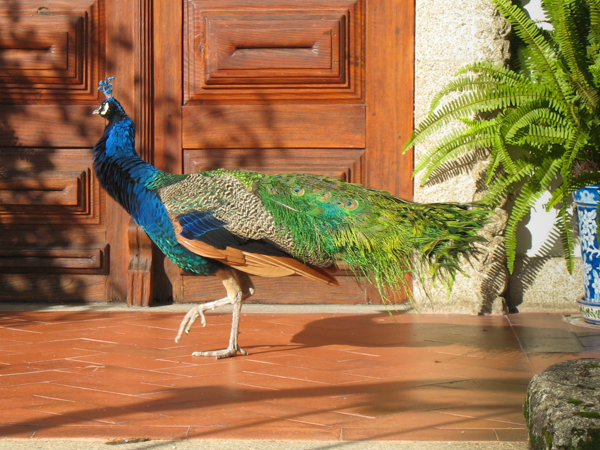 There were numerous peafowl on the estate. In the winter the males shed most of their splendid feathers.

One of the cocks was trying to put on a display, but he just didn't have it!

Even though this fellow had just been handed his walking papers by a peahen (in no uncertain terms), he struts away with dignity. 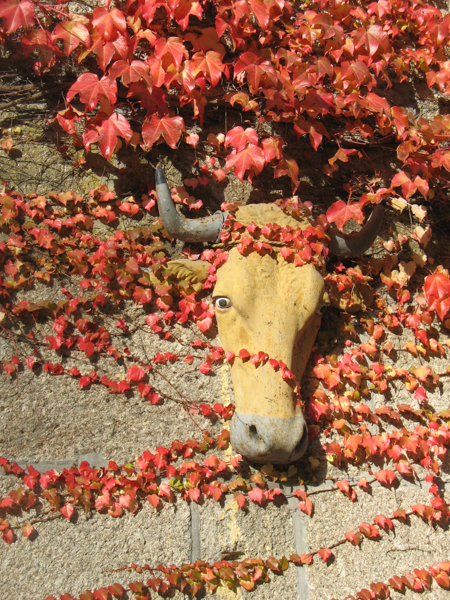 We never saw any indication of bull fighting in Portugal, but I was intrigued by this wall decoration that is about to be overtaken by ivy. 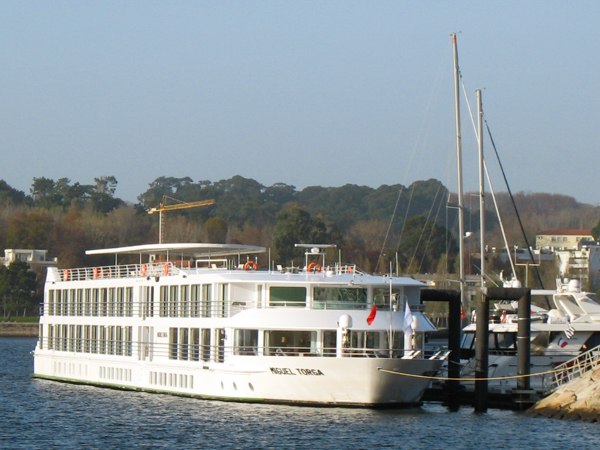 While we were enjoying Quinta da Avaleda, the ship had been making its way back to Porto. We met it at the dock where we originally boarded several days before.

We didn't get much sleep that night as our bus left for the airport at 3:30am! The ship's staff prepared a sumptuous breakfast for us, even at that early hour, so we didn't leave with empty stomachs! 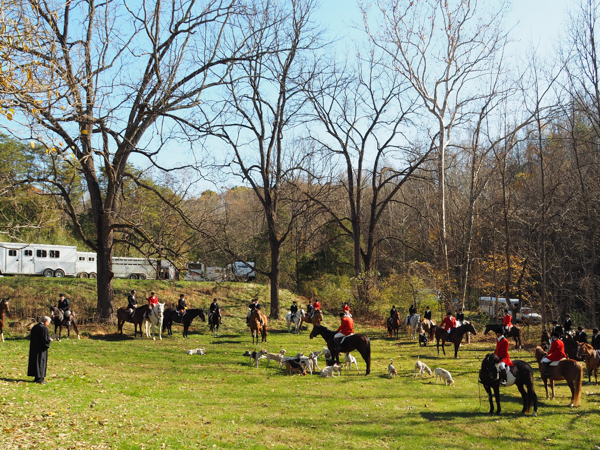 Our flight was an hour late arriving at Dulles due to strong headwinds, but otherwise without incident. We were thankful that we had arranged to spend the night at a local hotel before driving home in the morning.

I always like to include a picture to remind us that the best part of travel is coming home. The day before we left for Portugal I joined some friends for the blessing of the hounds of the Rockbridge Hunt.

It is always good to be home.