As the riverboat continues upstream, we will drive to the town of Lamego and, with our Study Leader, visit the shrine of Nossa Senhora (Our Lady) and the Museum of Lamego. The museum houses one of the finest collection of Flemish tapestries in Europe and a series of 16th-century paintings by the artist commonly known as Grão Vasco.

We return to the boat for lunch and as we continue sailing upstream, a local wine expert will join us on board to provide insight into Douro regional wines and olive oil. We will also have the chance to taste and compare the products.

Jim wasn't feeling perky so he chose to stay on the ship, which left Regua and transited the Bagauste lock before docking to await the return of the excursions.

Our first stop in Lamego was the sanctuary of Nossa Senhora, Our Lady of Remedies.

Construction of the sanctuary began in 1750 but it was only finished in 1905. It sits atop a high hill overlooking the city. 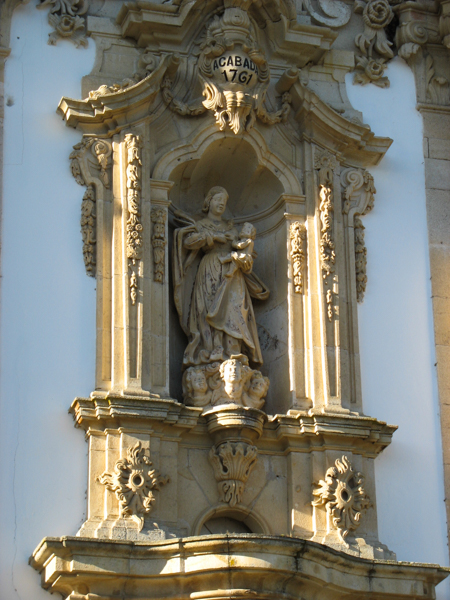 The sculpture on the facade of the church shows Mary offering her breast to baby Jesus. This is not a common image nowadays, but it was used in the Middle Ages and the Baroque.

The monumental stairway connecting the sanctuary with the city and eventually to the bishop's palace had landings with fountains, statuary, and tile work. We had the option of walking or taking the bus back down.

I couldn't get my borrowed camera working to capture pictures of the historic tile work in the Saõ Bento railway station, so I was pleased to get one of the images here.

It is an unusual depiction of the Visitation: a visibly pregnant Mary meeting her cousin Elizabeth.

Portugal seems to have an earthier realization of the Biblical images. OK!

The entire stairway has 686 steps. Pilgrims climb up, sometimes on their knees, but we took a bus up and walked down.

I now know that the limit for my knees is about 670 steps down. 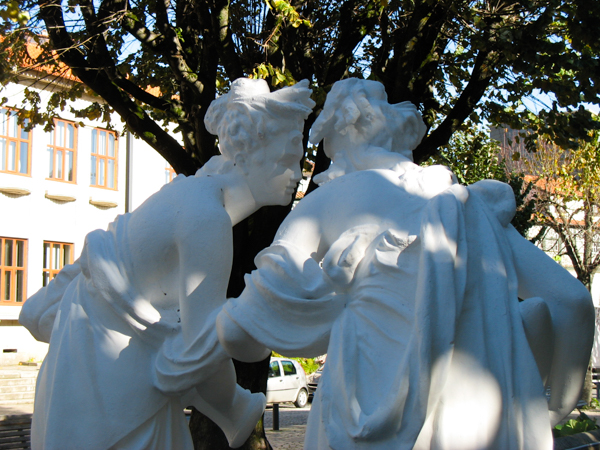 From the base of the steps to the former Bishop's palace is a series of fountains. The depictions of the four seasons were lovely, but my favorite was this image of two women so wrapped up in their gossip that they didn't notice the water draining out of their ewers. 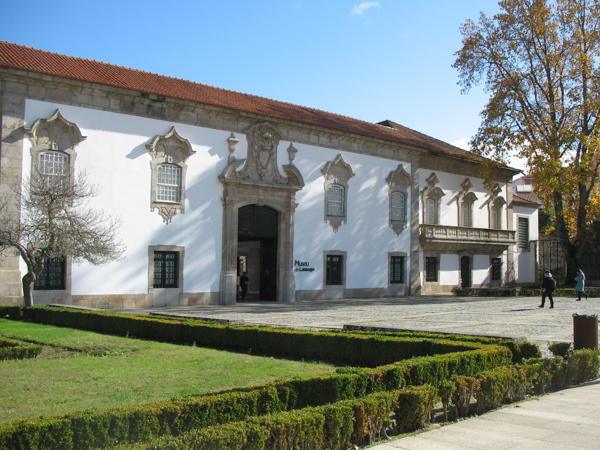 Our goal was the former Bishop's Palace, now the Museum of Lamego.

Our leader Paula estimated that it would only take 15 minutes to come down the 686 steps. HA! The walkers were a bit late.

Another obviously pregnant Mary is one of the treasures of the museum. It dates from the 14th century. 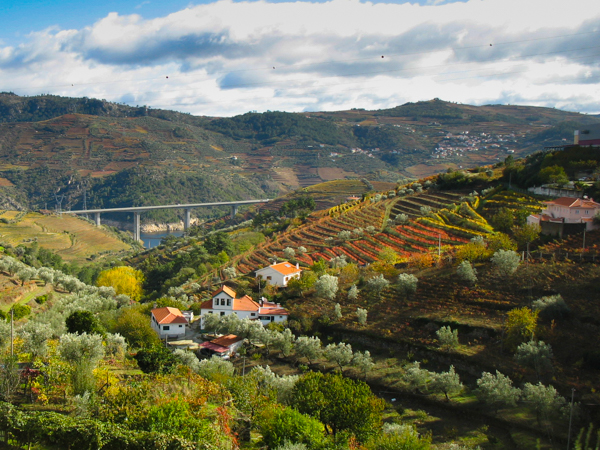 For the trip back to our ship, we stayed off the freeways in favor of the back roads. It was beautiful.

Olive trees are often planted on the edges of the vineyards as an additional cash crop. The grey olive leaves make a good contrast with the colorful vines. 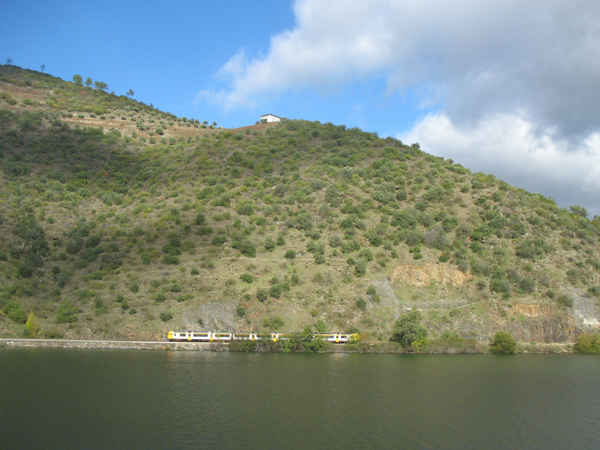 Once the excursions rejoined the ship, we proceeded up-river.

The train follows the river and there are rail-based excursions along the Douro as well. We did see some spots where the unstable schist terrain had precipitated landslides over the tracks and they were being repaired.

Many of the hillsides along the river had indications of abandoned terraces. Others had terraces that may have once been used for vines but are now planted with olives.

I don't know the name of this town, but it is clearly associated with Graham's Port. This has been our favorite label in the past.

Port wine is now available in many more varieties than in the past. In addition to Ruby, Tawny and White Ports, there is now a Rosé port and other variations with more or less sweetness.

At one time I loved to take long hot soaking baths with a good book to read and a glass of port to sip on. Jim even made me a reading rack suitable for the bathtub. I gave up that little luxury when we moved to California and our house's bathroom wasn't suitably cozy. Ever since our master bathroom has only had showers. I still have the reading rack if our situation ever changes.

As we proceeded upriver we reached the Valeira dam and lock.

Eventually, consumed by curiosity, several of us went to the rear of the ship to see what the story was. We had some notion that we were waiting for another boat to share the lock with us.

No, the downriver lock doors were closed. We waited.

At one point the lock doors opened partway and then closed again.

I took a picture of the stairs climbing out of the lock just in case we had to evacuate. It would have been a strenuous climb! Jim counted the number of steps, but I've forgotten the total.

Finally there was an explosion of bubbles from the bottom of the lock. And then another. And then we began to rise. Whew! 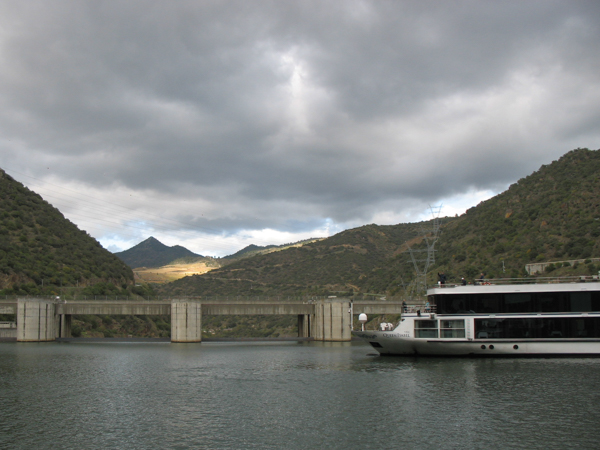 We were glad to cruise away from that particular lock! The ship headed downriver is the Queen Isabel.

An unusual feature of this dam is that it is situated at a 90° turn of the river. As we left the lock the captain had to use his bow thrusters to make a tight turn to prevent running into the opposite shore. 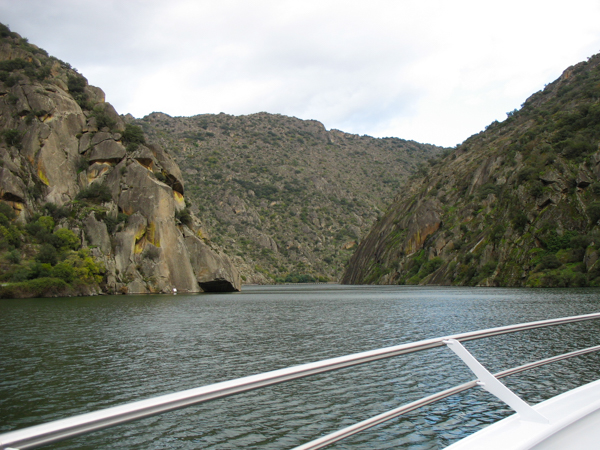 In the days before the dams, this was one of the most dangerous reaches of the river. It made many turns and featured rocky rapids.

As the ship continued up-river we had two young gentlemen who led us in an olive oil tasting workshop (!) and a wine tasting. I don't recall if they were actually related or only colleagues.

The olive oil tasting included sipping the various oils being presented. It was a peculiar sensation.

The young men had left jobs in the city and returned to the family farm to produce oil under the Chousas Nostras label and wine under the Gerações de Xisto label. The wines and the oil were all very tasty, but our favorite was the Dona Amelia, named after their grandmother.

The picture is from the winery's Facebook page, but it was taken as part of our workshop. 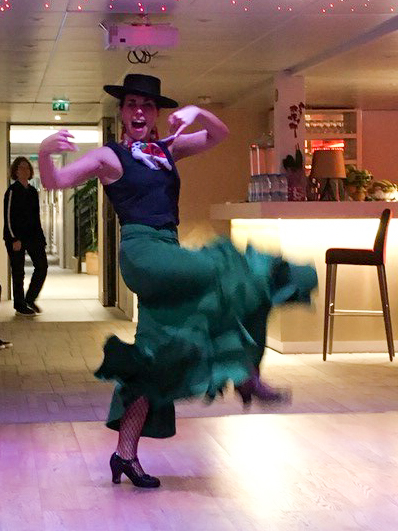 We passed our final dam, Pocinho, without incident and docked at Barca d'Alva for the evening.

That night the ship presented a flamenco show, but it was past our bedtime. We heard it was quite good.

This picture is from fellow "Green Team" member Judy Anderson.