The day began with a lecture on Portuguese history by Helena Duarte-Baltazar. Since we had no prior knowledge of Portugal, it was a welcome introduction and essential to our understanding of many of the places we visited. She covered a lot, but these highlights were associated with places we visited:

After the lecture we met our bus driver Nuno, another winner, and were off to tour the city. 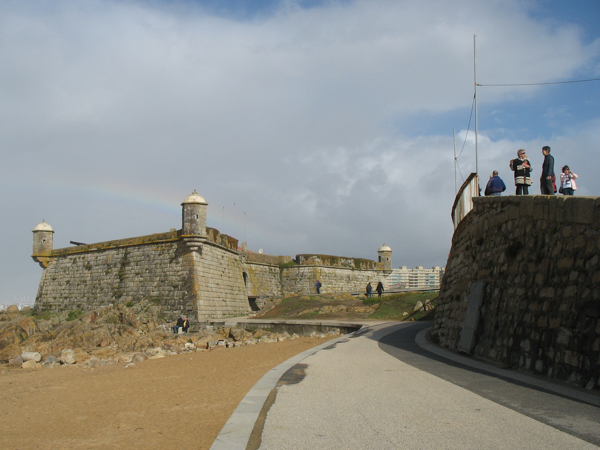 We started our tour of Porto along the Atlantic coast. This fortress, nicknamed the Fortress of the Cheese, might have been interesting to visit, but we only had a quick stop. Jim remembers that the odd name was due to an outbuilding shaped like a wheel of cheese.

There were a number of folks walking along the beach and even wading in the tidal pools in spite of the chilly weather.

We had checked out the weather forecast ahead of time so we came prepared. Although there were short spells of sunshine, we encountered frequent drizzles and downpours. Portugal has been experiencing a drought so it would be churlish to complain. Let's just say it made us appreciate every ray of sun! 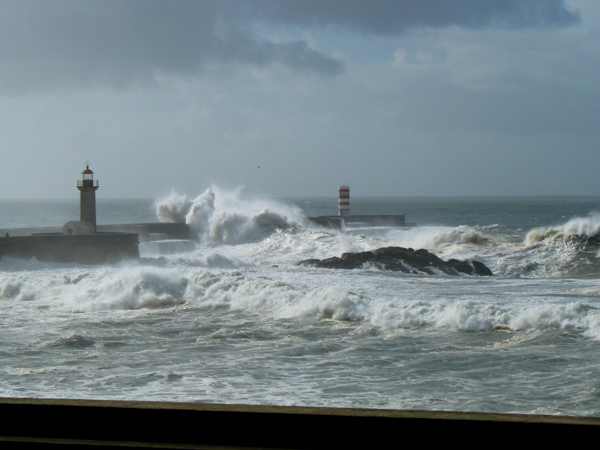 Even though there was no strong wind the surf was spectacular. Portugal is a surfing destination, but the rocks here are formidable.

The breakwater protects the entry to the Douro River. An aerial view of this area was on the "Arrival" page. 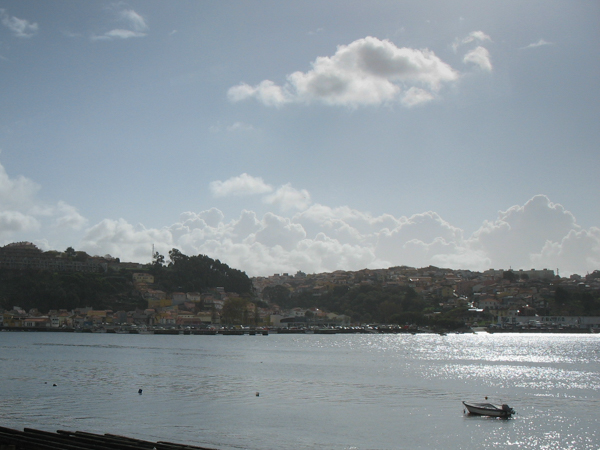 Gaia is located across the river from Porto. It was and is the location of the Port producers. The wine is aged here rather than at the place of origin upriver because the temperatures are less extreme. It is also closer to the ocean for shipment after bottling.

Based on the information at the link above, Gaia actually predates Porto as a settlement. It was prominent in Roman times.

Nowadays the wine is shipped down the river to Gaia via truck or train, but until the railroad was completed in 1887 the wine came downriver in barrels in specially built Rabelo boats that could navigate the rapids. The ship ran a chilling video showing these boats running the rapids. A much tamer and shorter version can be seen on YouTube.

The boats were hauled back upriver either by oxen or by men who pulled them like the trackers of the Yangtze. Before the dams were built the river was very dangerous.

I have no pictures from downtown Porto, but managed to resurrect the camera for our tour of Villar de Allen.

The ancestral Allens came from England in the early 19th century to produce port. England and France were at daggers drawn, so the British sought a new source of wine. England and Portugal have been allies since the 14th century, so it was an obvious choice.

Problem: the increased transport distance required the wine be stabilized in some way. Solution: add brandy. Result: fortified wine named after the city where it was shipped: Porto!

The current generation of Allens, 8th from the original immigrants, have resurrected the tradition and are producing award-winning ports. After the garden tour we sampled some. 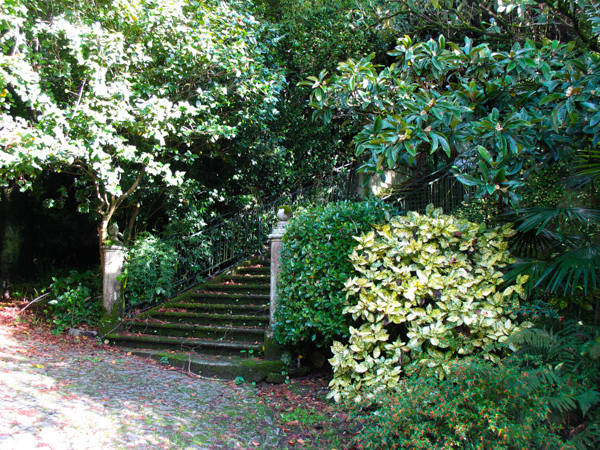 I can no longer remember the name of the family that built the manor house, but at some point the paterfamilias decided to augment his income by constructing a leather tannery and factory on the property. Stinko! When he died, the descendants couldn't wait to unload it. Attempts to find a buyer didn't prosper, so the house and land was sold at auction in 1839. The successful bidder was John Allen who got it for a song.

Mr. Allen leveled the factory and brought in tons of fresh dirt to bury the stink. It worked and a side benefit was that he was able to design and plant a botanical garden on the fill. 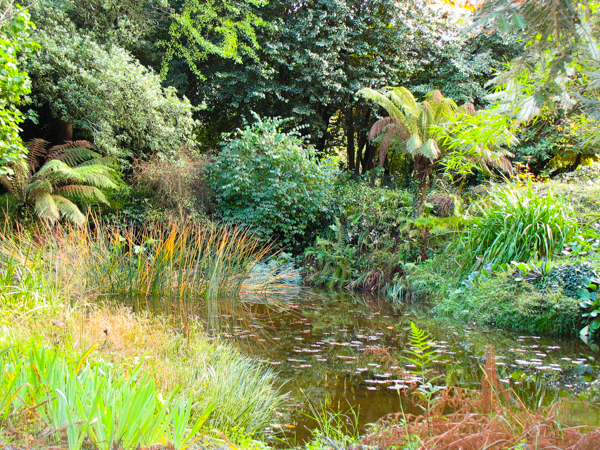 The garden is not at its best in November, but the variety of plantings show well around this ornamental pond.

Nearby a giant sequoia was thriving. It is a mere 200 years old and we hope it continues to develop.

Another unusual tree in the area was an araucaria from South America. We saw one of its enormous cones on display. It is as big as a soccer ball, and the nuts are the size of figs. We learned about this tree when we visited Argentina in 2008. Our botanist guide said that parking a car under one of these would be a bad mistake if one of the heavy cones dropped from the height of the tree. 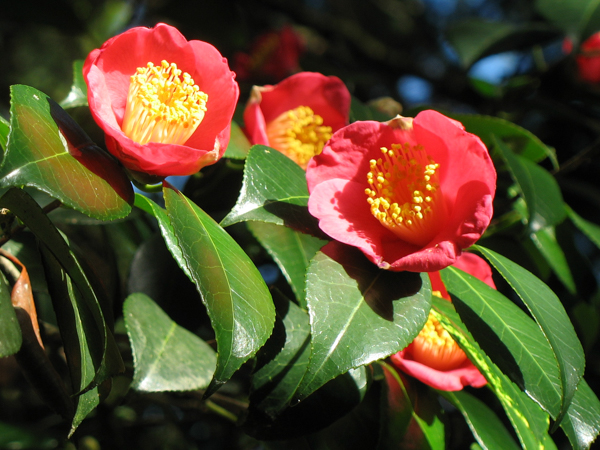 The sentimental novel and play Camille and the operatic version La Traviata popularized camellias in the late 19th century. Mr. Allen planted numerous varieties of this plant and subsequent owners have added to the collection.

Isaura Allen is an authority on the plant. We saw many that she had cross-bred and propagated.

November is not high season for camellias, but a few were blooming. 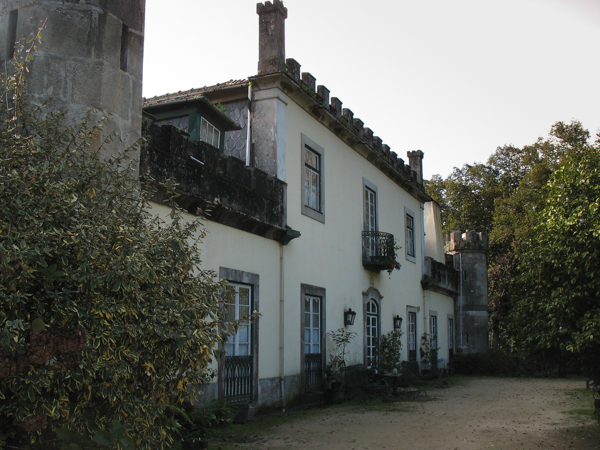 When it was built, the house faced the opposite direction, but at the time John Allen buried the tannery he changed the main entrance to face the back garden. He also added wings and turreted towers to evoke an English estate. 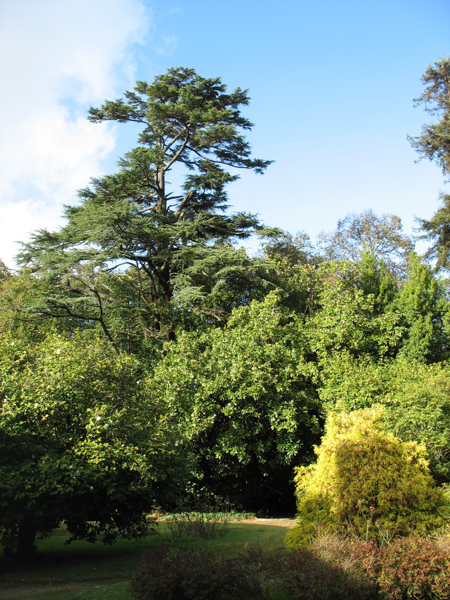 The sequoia dominates the lawn and garden. 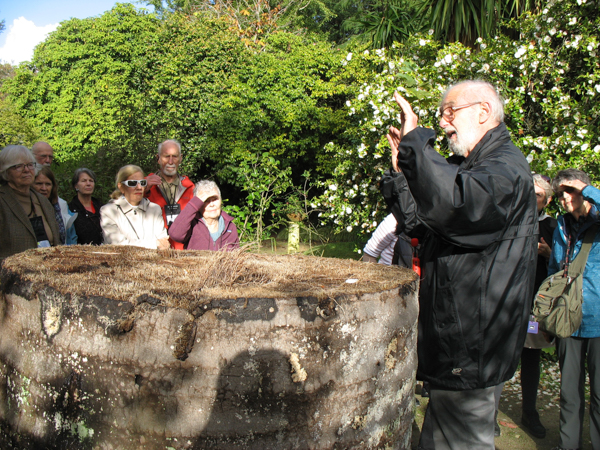 The current Mr. Allen explained that the Spanish imported palm trees from Egypt in 1995. The red palm weevil hitchhiked on the imported trees and has devastated the local palm population.

The garden had four huge rare palms, but the weevils found them especially delicious. Once local arborists identified the problem they were able to save one of the trees at the price of regular applications of pesticides.

The Allens considered that the dead palms were too close to the house so they arranged to have them removed. This particular palm destroyed several chain saws before the arborists identified a better removal method. The trunk of a palm is not wood -- it is composed of many fibers that foul the chain of the saw. 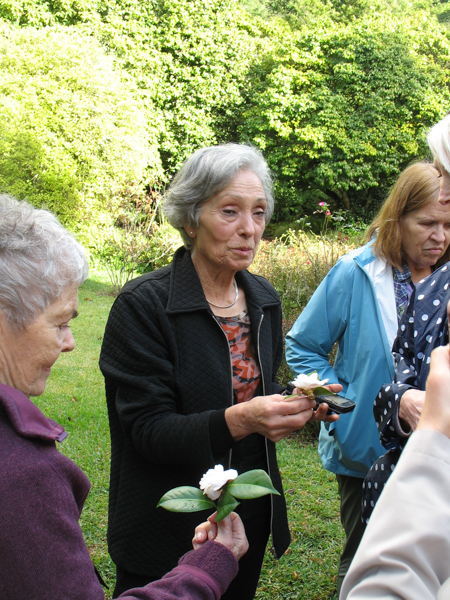 Mrs. Allen introduced us to some of her camellias -- including those that are the source of tea.

She had been a cabin attendant at Mozambique Airlines when she met Mr. Allen. She was also a ham radio operator.

I chatted with her about my brother's amateur radio obsession. Being in Mozambique she was quite popular with hams all over the world who were collecting countries. She and a friend went in together on a superior antenna that gave them a very long range. I had to think about my brother's creative approaches to building a better antenna -- including hauling a lead up a tree in his back yard to get around homeowner covenants. 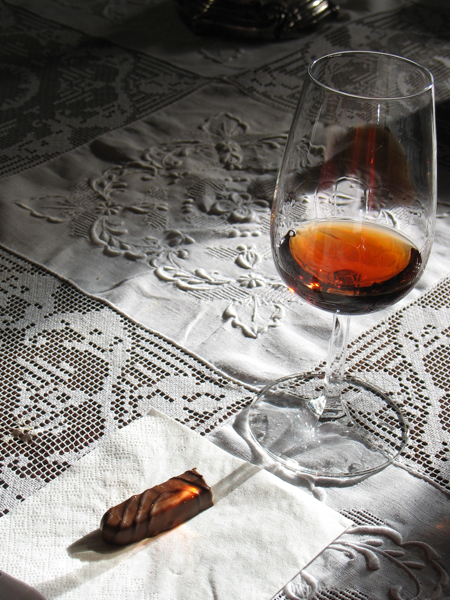 After the garden tour we enjoyed a tasting of Mr. Allen's award winning port.

He explained the rarity of vintage port. Most ports are blends of several different years. As they age in barrels the wine evaporates a bit and must be topped up from time to time. Since a 20-year tawny port such as this one ages in the barrel for 20 years before being bottled, it contains wine of many years.

From time to time producers declare a "vintage year" when the harvest is superior. Those wines are deemed able to age in the bottle so that topping up is not needed. 1977 was such a year (of course, we married in 1977!) and we bought several cases. We still have some bottles and shared one with friends earlier this year. Yum!

In theory a vintage port will keep indefinitely -- if the cork doesn't fail, which they do. A number of ours have suffered cork failures, but those that haven't are still delicious!

A vintage port must be consumed within a few days after being opened. An ordinary port will last a few months after being decanted. They say. 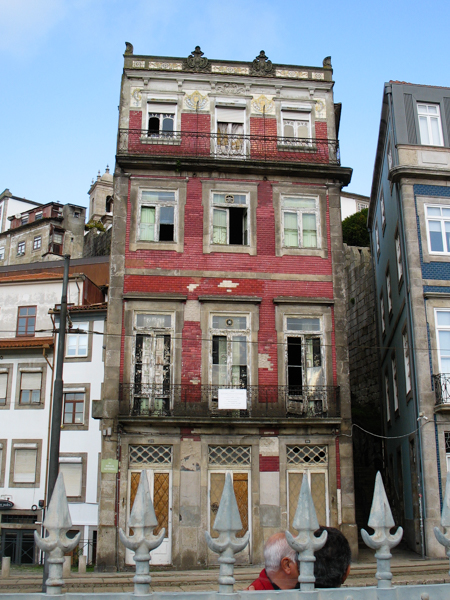 After our visit to the Allens, which was one of our favorite excursions of the trip, we returned to downtown Porto to visit the old town.

There are very many derelict buildings such as this one. They are the unintended consequence of well-meaning rent control policy. It was once the case that the owners of rental units were unable to raise the rent for their tenants. If the child of a tenant was living with his or her parent at the time the parent died, the landlord still could not raise the rent. And so on.

Although the intent was to allow pensioners a guaranteed home, the result was that landlords were unable to maintain the properties. They were also unable to renovate them as long as there was a tenant who wanted to stay.

The laws have now been changed and many of the desirable properties in Porto are being gutted and renovated. The facades are preserved.