Although we had a wonderful trip with Road Scholar, we were eager to branch out on our own.

We approached our anchorage with a glorious sunrise.

The original plan was for us to dock in downtown Chicago at the Navy Pier, but the captain decided to divert to Calumet Harbor southeast of the city on the Indiana border due to high winds. 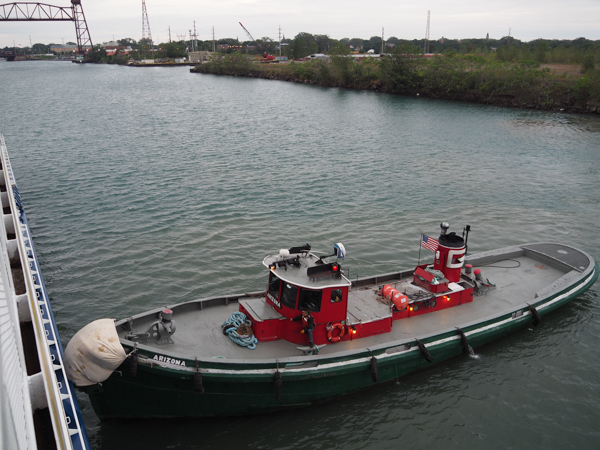 Those high winds necessitated the assistance of a tugboat. Our ship has a high profile and may be more sensitive to cross winds than most. In any event, the tug tied up at the rear of the ship to steady us as we passed into the narrow channel. Later it moved to the side to push us towards the pier while the crew secured the lines.

I enjoyed watching the ship land the gangplank so that we could go ashore. The port didn't have a lot of eye appeal. It also didn't appear to be thriving. Chicago has not kept up its commercial facilities and has therefore lost a lot of business to other nearby modern ports. The city hopes that yet another turn-around plan will improve the situation.

When we first heard about the change of dock, we asked how to call a taxi to meet us at the new location. It wasn't until later that the staff admitted that taxis refused to come to the commercial port. Hmm.

In the end, Road Scholar arranged for a bus to take the handful of independent travelers to the Navy Pier where we could get local transportation. 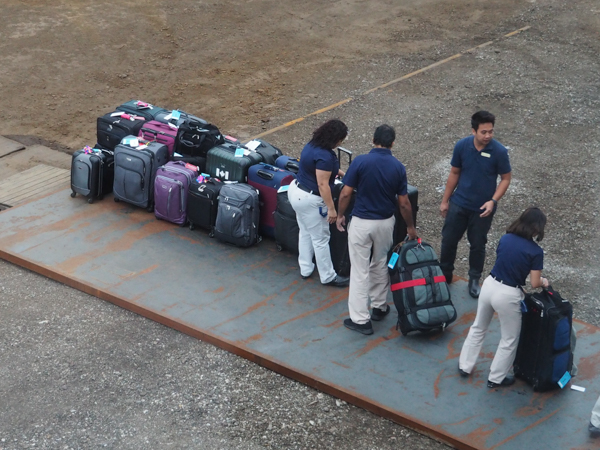 Colored luggage tags indicated which bus would whisk us where.

Those of us who had cabins that opened into the interior of the ship had to put our tagged luggage out the night before to be collected. The rooms on Deck Four open onto the open deck, however, and they got to keep their luggage until the morning. As our tour leader said, they didn't want any luggage blowing overboard during the night!

As the buses arrived, groups unloaded and identified their luggage before getting onto their bus. The first group, with the blue tags, was staying in Chicago on an extension program. Two other groups were going to different terminals at O'Hare. We were the last bus. 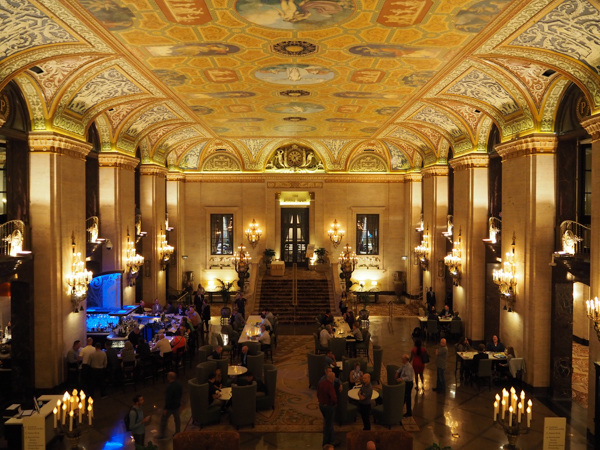 The Palmer House lobby was just as gorgeous as I remembered. It has recently had a major renovation to bring back its original glamour. The rooms have also been renovated, but the less expensive one we reserved was advertised as being small and it was. At least it was larger than our room on the ship: we could both get dressed at the same time! 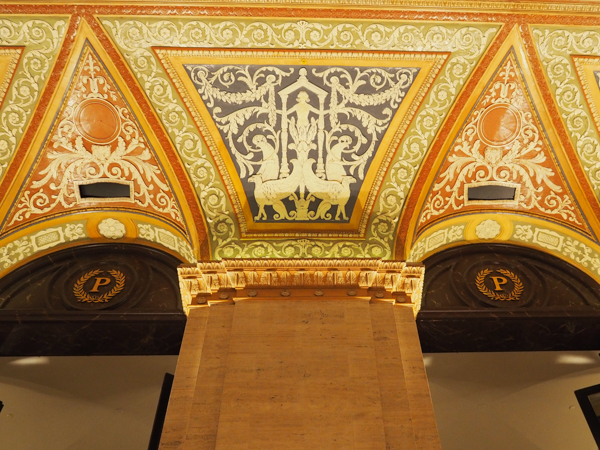 Jim loved the detailing in the spandrels along the ceiling. The designs are reminiscent of Wedgwood Jasperware. 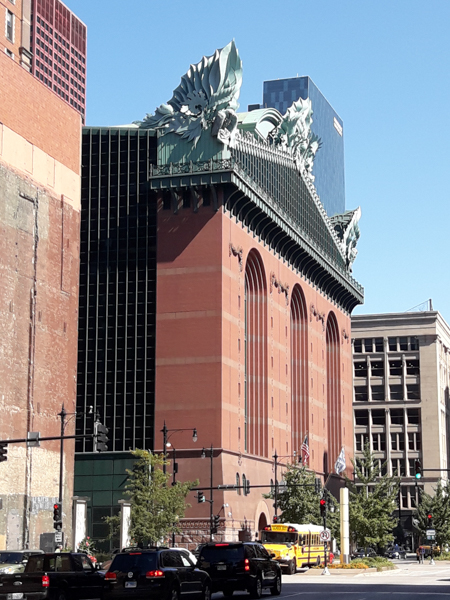 After checking into the hotel and unpacking, we went out for a walk to find a burger. Based on Google maps we picked a place called First Draft. Although we certainly could have stopped at many closer joints, we were happy with our choice.

The bartender gave us good hints on things to see at the Art Institute!

After lunch we walked past the main office of the Chicago Public Library. The elaborate corner ornaments, owls representing wisdom, stopped us dead in our tracks.

The Art Institute of Chicago is just a block from our hotel.

We would like to have spent more time there, but were getting tuckered out. To see some of what we liked, check out these pictures.

While at the Institute we met a group of Road Scholars who were leaving that afternoon on the Victory I headed to Toronto. I hope their trip was less "eventful" than ours.