We arrived the following morning at Mariehamn, the capital and largest city, of the Åland Islands (the funny A is pronounced like OH).

We didn't have our final lecture from Professor Posen until the end of the day, but I'm putting the notes here rather than tacking them on at the end. The subject was: The Post Cold War U.S. Grand Strategy Debate. An evocative subject!

He started with some questions:

Why we need a Grand Strategy

To prevent another 9/11. We need a working theory to provide security.

Security requires three things: sovereignty, safety & territorial integrity. In the old days this was tied up with land, which is easy to define and defend. The world is more complicated now. States have various national security institutions: intelligence agencies, the military, and others. There was little coordination in the US prior to 9/11. A bureaucracy has developed to coordinate and communicate.

Who had the debate

Institutions have people who were, are, or want to be influential, e.g., the Brookings Institution, the Council on Foreign Relations, the American Enterprise Institute, the Rand Corporation, academics, and others.

These are the ones who write and practice, not politicians who are primarily consumers. The argument was mostly within this group.

The number varies, but there are four major ones.

One and two have combined in the minds of many as liberal hegemony. This has not been successful for a number of reasons including a lack of real priorities, a tendency to be trigger-happy, and failure to appreciate the underlying dynamics.

Nationalism was once an isolated phenomenon, e.g., in the former Yugoslavia. We are now living in an age of hyper-identity-politics. Self-aware peoples don’t like the US telling them what to do.

An advocate of primacy. Doesn’t care about principles or legitimacy. Doesn’t make any distinction between internal and external power. Profit, either in money or prestige, is a prime driver.

Who knows? Many are questioning old allegiances. Nuclear proliferation is a threat – not so much as a weapon of nation-states but as the potential to be used by small players who might steal a weapon.

Now back to our travels... 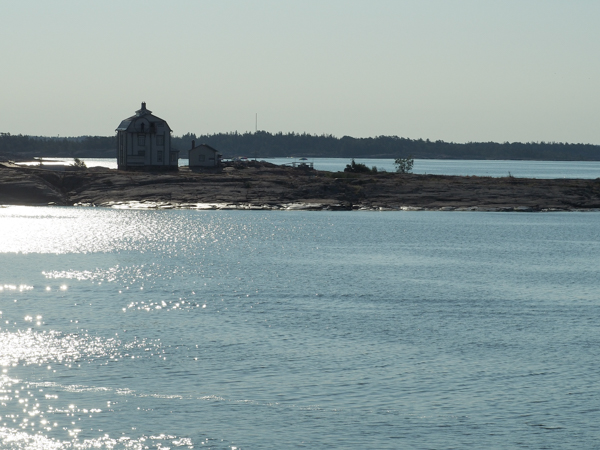 The islands are a large archipelago and we threaded through many smaller islands on our way into the harbor.

I'm not sure if this was a kind of lighthouse or not. It had a large white triangular structure next to it that appeared to be a navigational marker of some sort. 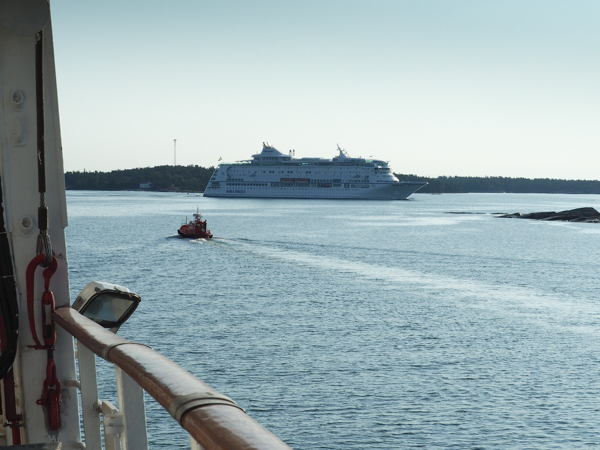 We were not the only visitors. This ship was from Birka Cruises. It is an Ålandian company. There was also a Viking Line ship in port.

Our pilot boat seems to be fending off the larger ship. 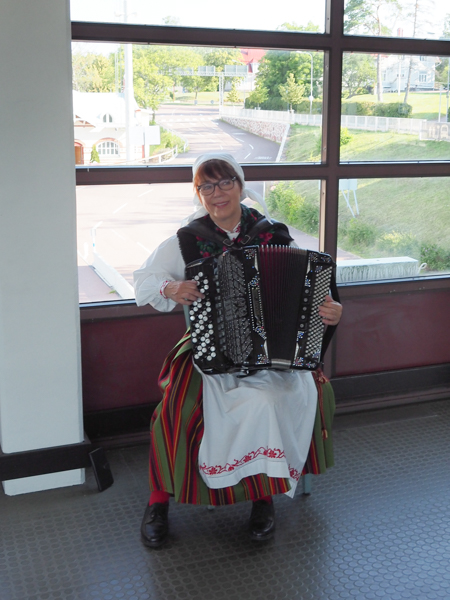 As we left the ship for our respective excursions, we were met by this one-woman welcome committee.

There were three excursions offered here. Jim signed up for the open-air museum followed by a tasting of "local spirits." He enjoyed his choice very much.

I signed up for a bicycling expedition. Hmmm. 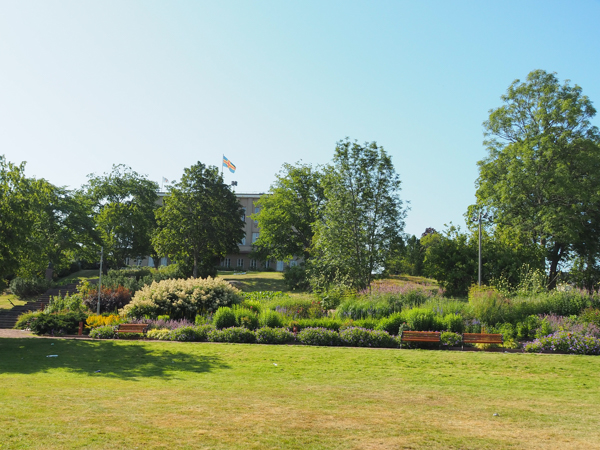 After getting our bikes and gliding around the pier area for a while, we started off on our expedition in two large groups. I had expected a fairly small number of cyclists, but there were almost 40 intrepid participants.

It was my first time on a bike in about ten years, and I did not cover myself in glory.

Our first stop was the park by the City Hall. This is part of the venue for an annual rock festival called RockOff. This year the festival ran from the 19th to the 27th of July -- so we were there almost in the middle of it. We were too early in the morning for the music though.

The guides said that the festival is funded by a local entrepreneur and there are often some pretty famous folks that come to spectate as well as participate.

After this stop we took to some wooded trails toward the south of the island. 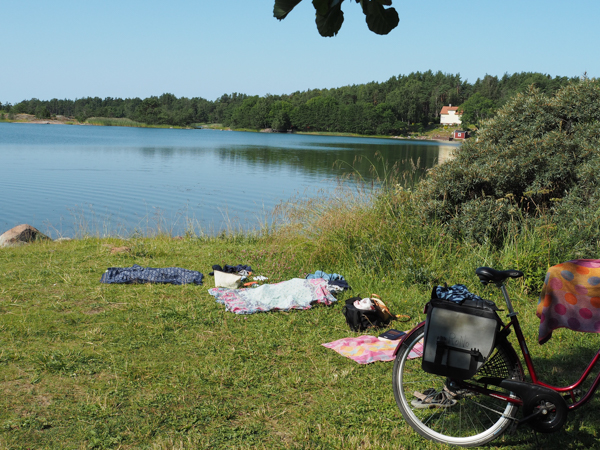 Over the course of our excursion we crossed the island several times riding on highways, city streets, and wooded paths. One of our stops was at this beach where several locals were enjoying the warm weather.

Over the course of our trip Europe experienced record high temperatures. The day before our visit to Mariehamn (25 July) these records were set:

In contrast, the temperature in Mariehamn, located in the Gulf of Bothnia was in the high 70s. People always wonder why we go north in the summer.

As we continued south on our excursion, we crossed long bridges to other islands (nerve-wracking with traffic and a cranky bicycle). There weren't many stops so I didn't get a lot of pictures. It was very beautiful. 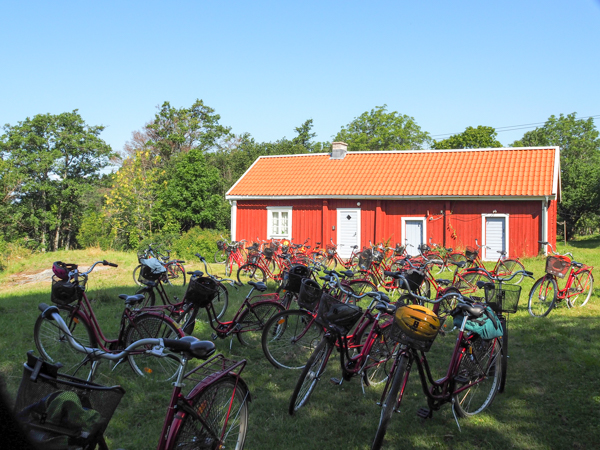 Our destination was the island of Järsö. Both groups stopped at a small farmstead or park on the water.

I have to rant about my bike. They were all "standard," but my fellow travelers said that my back tire was about half flat. No wonder those gradual hills were so hard! Additionally it weighed almost as much as I do and it was cranky and hard to steer.

For the final insult, it had both a hand brake and a coaster brake. I had never ridden a bike with coaster brakes before. My automatic gesture when stopping is to rotate the pedals backwards before stepping down. What that did was bring the bike to an abrupt halt while my feet were still on the pedals.

I ended up falling three (3) times. Nothing much was hurt beside my dignity -- and a skinned knee and a few bruises -- but it put a damper on the enjoyment. 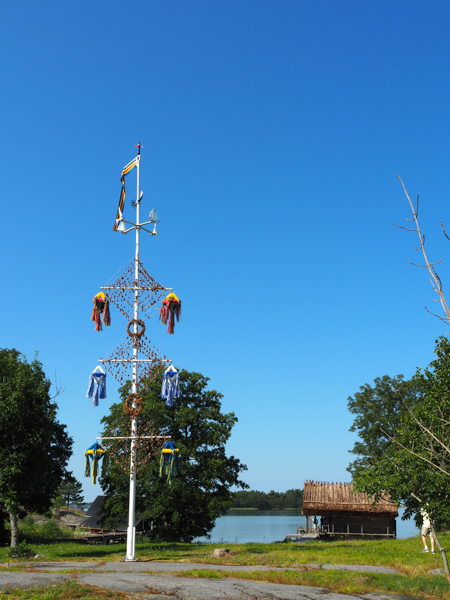 Our guides explained the symbolism about the Maypole, but I don't recall the details. It is an integral part of the Midsummer celebration. 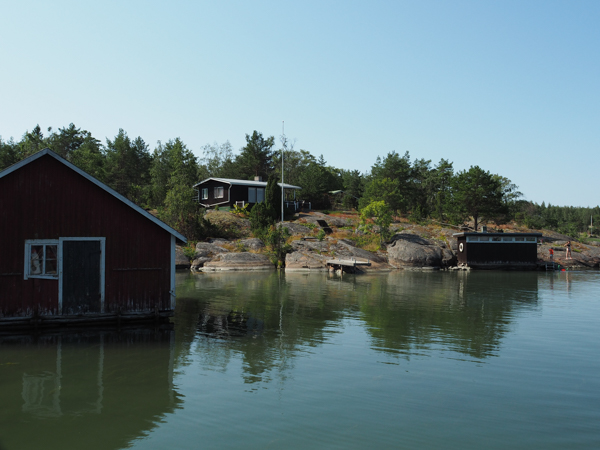 The red houses with white trim reminded me of the guide in Stockholm who told us that every Swede's dream is to have a summer house so decorated.

Although the Åland Islands belong to Finland, they have a much closer affinity to Sweden. Most of the islanders speak Swedish as a first language although they also speak Finnish if need be. And English. And probably one or two others as well.

When we asked our guides if they considered themselves Swedish or Finnish, they promptly answered: Åland Islanders.

We had been warned that Finnish stamps would not work for postcards from Mariehamn. The islands issue their own stamps. 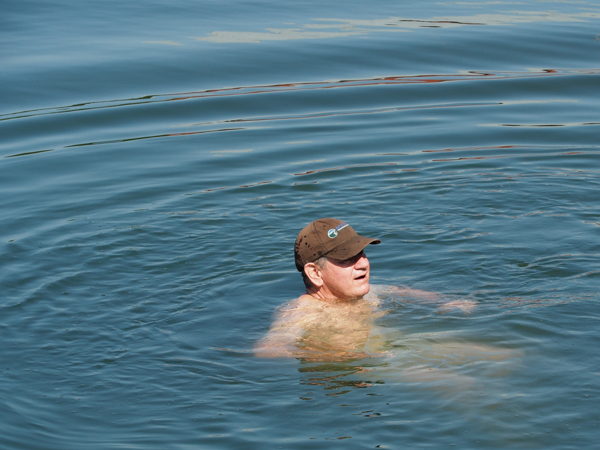 It was a warm day and one of our group decided to give the water a try. He said it was very refreshing, but there weren't any other takers.

His clothes were dry by the time we reach our next stop on the ride.

The windmill was not old, but I thought it was pretty. It did not appear to be functional. 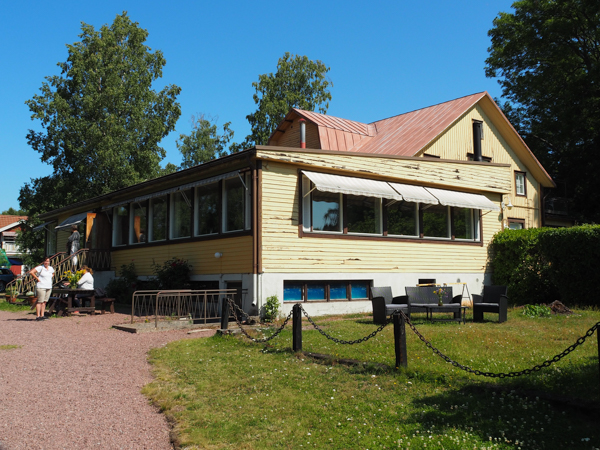 After a refreshing stop we were back on our bikes headed north toward Mariehamn. Our destination was Pensionat Solhem where we had a midmorning nosh break. 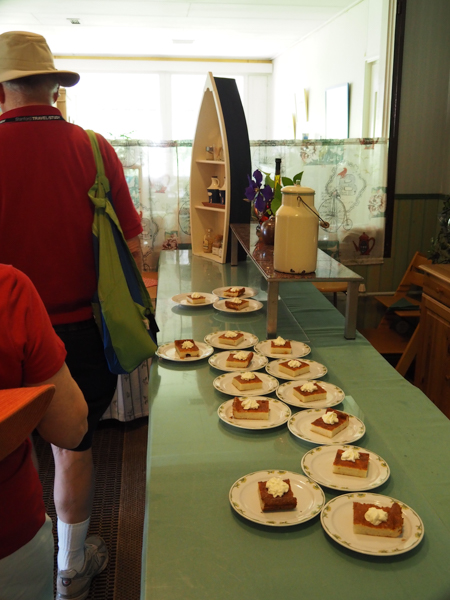 The main attraction was Åland pancakes. Our guides had been downplaying them by saying they were an acquired taste. We all agreed they were delicious! I took a picture of the recipe and mean to try them at home some day.

We crossed paths here with the excursion group who had elected a bus tour followed by a handicraft center.

After our pancake stop we pedaled back to the ship. I whined to the bicycle vendor about my beast of a machine and it was rolled away for attention.

Some folks spent the afternoon walking around Mariehamn. I took a shower, nursed my bruised ego, and packed. Later in the day we saw this regatta of small sail boats tacking alongside the dock. It appeared that there was some kind of race underway. 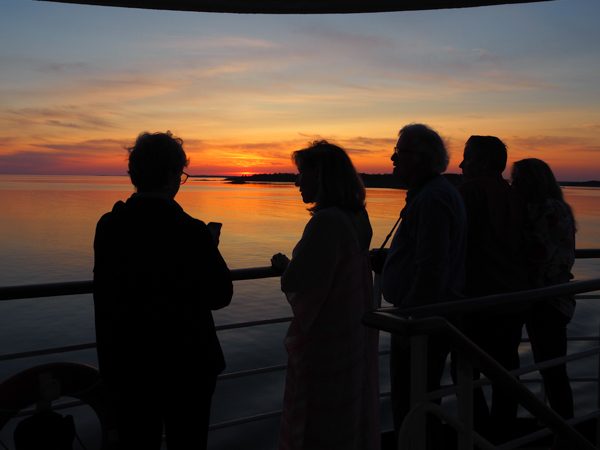 The sun was setting in glory as we cruised toward Stockholm.

This was our last evening on the ship. Click to see pictures from the gala farewell -- including some of our memorable fellow travelers.

Tomorrow morning we would all be leaving in Stockholm and scattering to the four winds. As it happens I woke up that last morning with laryngitis, so I had to say good-bye to everyone in sign language!

It was an uneventful return otherwise and we were happy to get home. 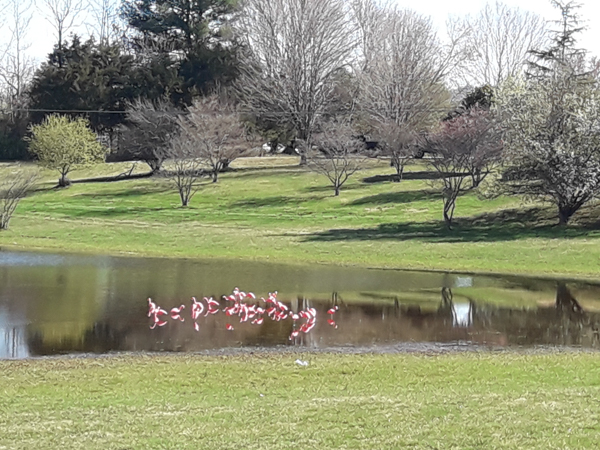 Speaking of home, I always try to end a travelogue with a picture from home.

This spring we had an inordinate amount of rain. I often passed this house on the way to my fiddle lesson and enjoyed watching this small pond grow to fill the yard. One morning I caught a glimpse of pink out of the corner of my eye. I quickly turned around to find that the homeowner had arranged a flock of plastic flamingoes in his flash pond. Rockbridge County is full of jolly sights like this as well as stunning beauty. We like it here.

Both pond and flamingoes are now just happy memories.