After lunch we had time on our own before returning for the chalupa demonstration. Road Scholars in Team B fanned out all over downtown to see what they could see. Although everyone had their own paths, we kept bumping into each other.

First, however, Jim & I needed to take care of laundry. We had discovered the guest laundry high atop the hotel's roof garden, and put some clothes in prior to our morning cookery class. We visited it before lunch to transfer the clothes to the dryer, and later I took my camera along to catch some pictures. 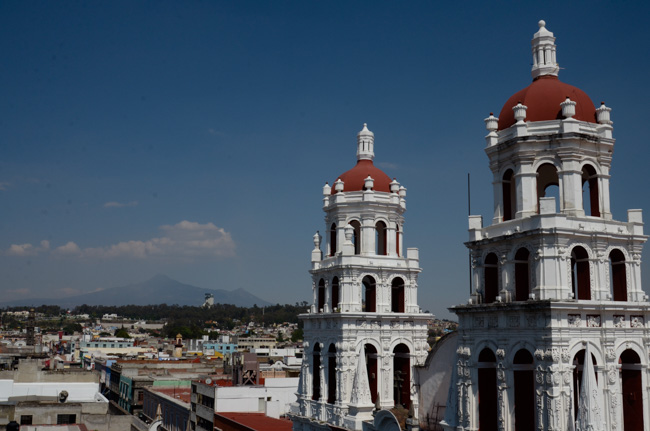 Puebla is in a valley surrounded by volcanoes. These towers belong to the church that the Jesuits built starting in the 16th century in conjunction with the original construction of our hotel. The towers were completed in the 19th century.

The mountain on the horizon is called Malinche, after the indigenous woman who acted as translator (and mistress) for Cortez. Her history and legacy are both complex. Check the information at the link.

This volcano has been dormant for over 3000 years. 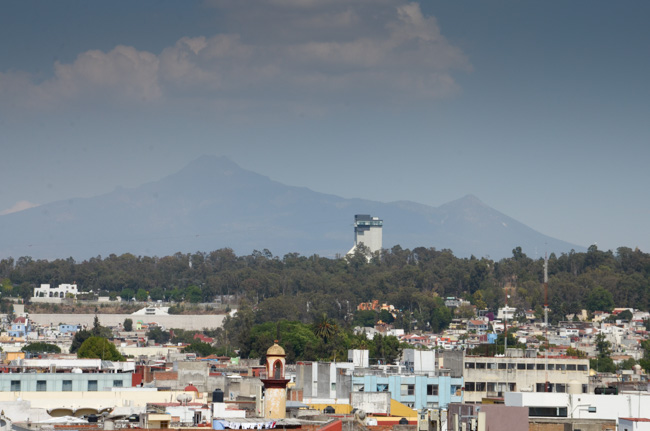 Popocatépetl, in the opposite direction, is anything but dormant. Its eruptive activity increased following the September, 2017, earthquake and at the time of our visit it was considered by the Smithsonian's Global Volcanism Program to be at alert level yellow: elevated activity.

We thought, hmmm, already earthquakes; are we to be treated to a volcanic eruption too? 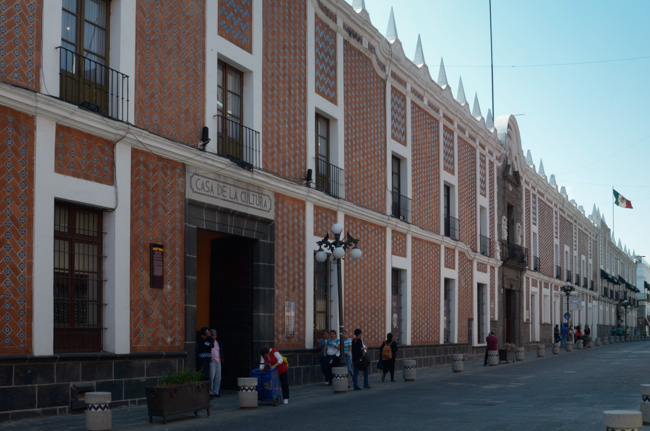 We were off to the Casa de la Cultura, the former archbishop's palace. The facade is red brick in a herringbone pattern with blue & white tiles set at the apex. Our goal was the Palafox Library. It is the oldest library in the Americas and originated in 1646 and the personal collection of Bishop Juan de Palafox y Mendoza.

The Bishop stipulated that the library be open to anyone who could read, a remarkable decision in his day.

When the library moved to this location in the 18th century, it had two levels of shelving. The upper level was added in the 19th century. The extra weight caused damage to the original bookcases during a 1999 earthquake and the entire room had to be restored and strengthened.

Workers in the adjacent courtyard were repairing damage from the September, 2017, quake, but the library seemed unaffected. It helps, I'm sure, that the bookshelves all had lockable doors keeping the volumes secure. 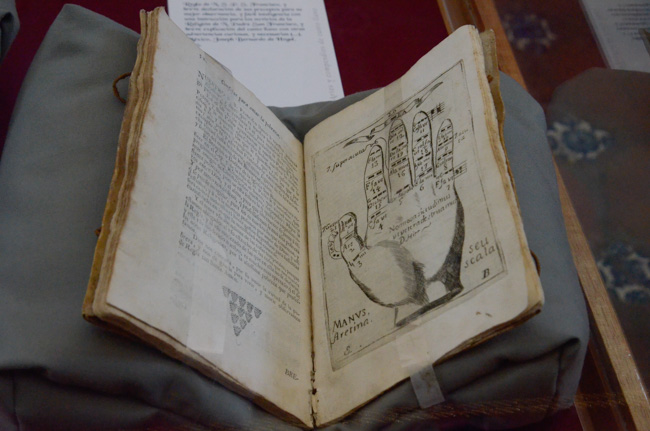 There were a number of ancient books on display. This one depicts the Guidonian Hand, a mnemonic system of sight-reading music. The information at the link indicates that music supported the missionary effort of the Franciscan monks sent to New Spain and that they used the Guidonian Hand to teach music as well as its place in worship. 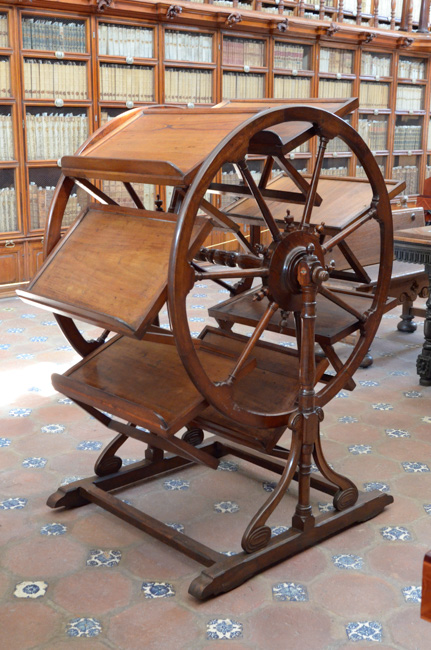 Jim and I found this device fascinating, but there was nothing to describe what it was or how it might have been used. Subsequent research has identified it as a bookwheel -- useful for doing research across several different large or heavy volumes.

Our guides had told us that this library was a MUST SEE and they were right. Our fellow travelers said it didn't take long, but we found it fascinating and spent quite a while there.

Our next stop was the Amparo Museum.

Our goal was the pre-Columbian artifacts, but there was also a temporary exhibition of the works of Sheila Hicks.

This vibrant "appetizer" in the entrance gallery was enticing, but time was limited.

One display in the museum was a hallway with a timeline showing how the Mesoamerican cultures lined up with Polynesia, the Roman Empire, the Incan Empire, and other African and Asian cultures. For example, the mural at Cholula, which we will be seeing later, was created at roughly the same time as Trajan's column.

Check out pictures of some of our favorite museum exhibits.