Across Europe in Luxury
Budapest

After lunch Jim wanted to stay on the ship to start packing, but I had a hankering to see more of the city. Balázs had told us of a number of sights within walking distance of the ship, so I grabbed my camera and headed out. 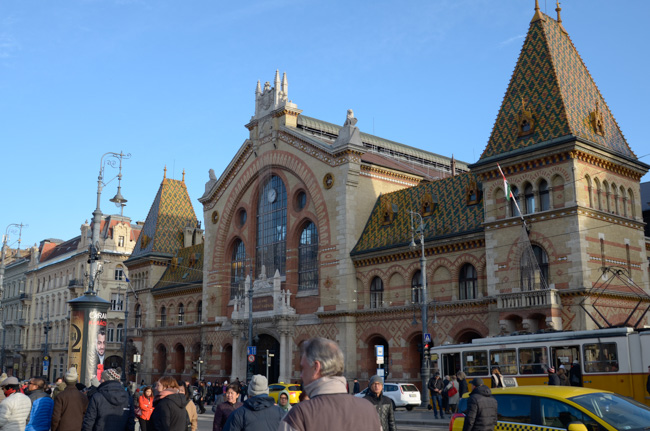 My first destination was the Great Market Hall, built at the end of the 19th century. It was said to have been designed by Gustave Eiffel, but I've not been able to verify this. 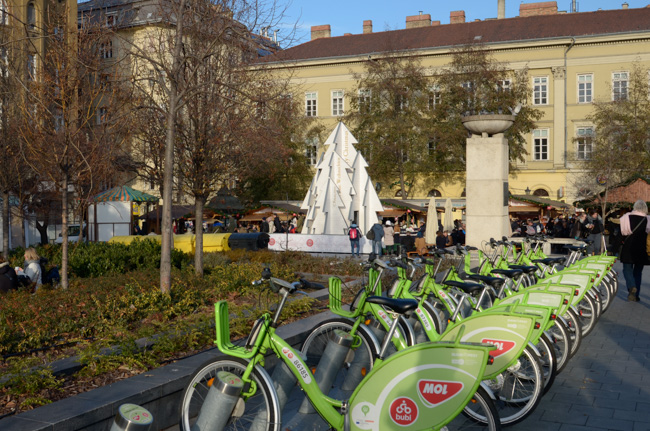 There was yet another Christmas market across the street from the Great Market Hall. The Christmas tree sculpture had "Merry Christmas" in at least a half-dozen languages.

The green bikes are part of a bike-sharing service called MOL Bubi. 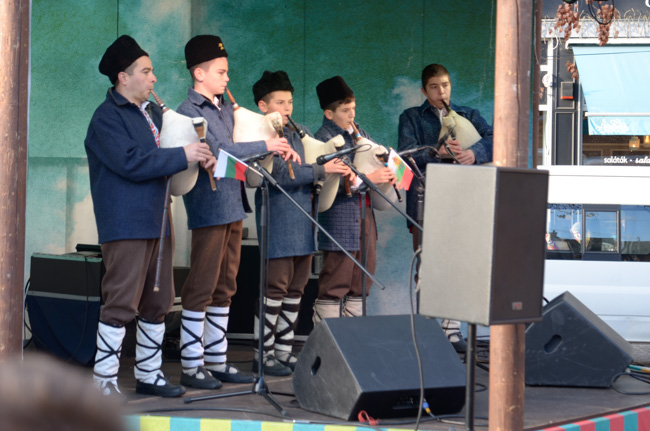 There weren't eleven of them, but there were pipers piping at the market. The Hungarian bagpipe is called the duda. If you want to hear some, click on this YouTube video (opens in new tab). These pipes, however, lacked drones except for the one closest to me. They were very reedy sounding as a result.

He may not have been a "Lord a-leaping," but this little guy was grooving to the pipes. 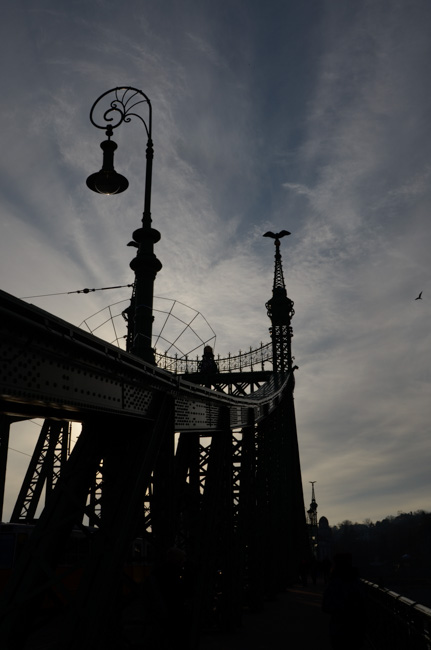 After visiting the market I walked west across the Danube on the Liberty Bridge. 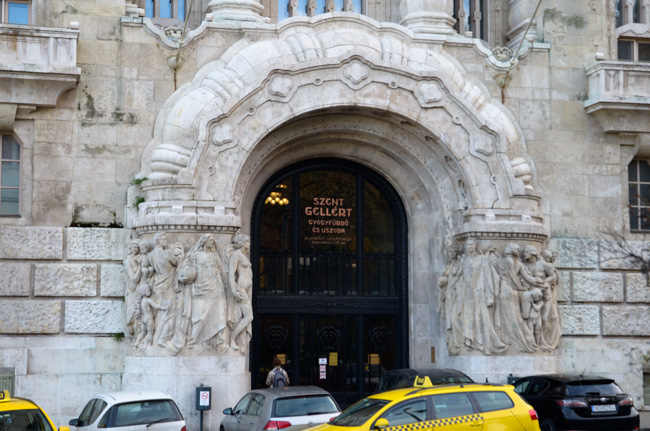 On the opposite side of the river from our ship is the Saint Gellért Hotel and Baths. I didn't go into the hotel, but I did check out the baths to see what they were like. You can see interior shots at the link. 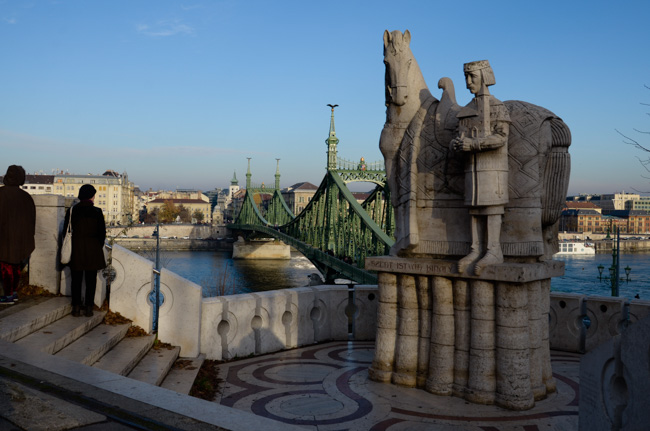 Another sculpture of St. Stephen. This one, on Gellért hill, is from the early 21st century. 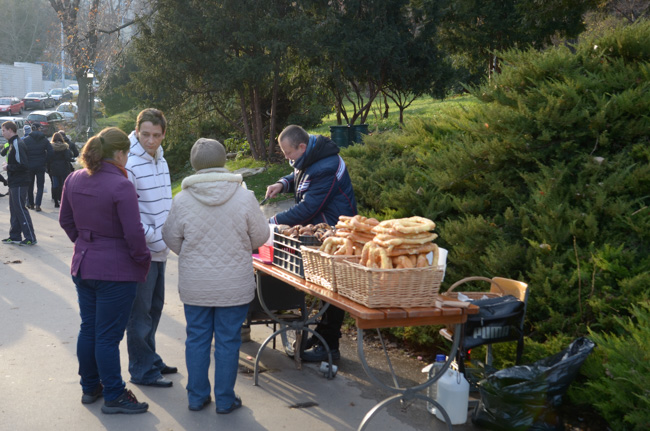 A large park borders this area and many people were enjoying the sunshine and mild weather. This pretzel and sausage vendor was doing a good business. I was tempted by the pathways through the park, but not quite bold enough to explore on my own. 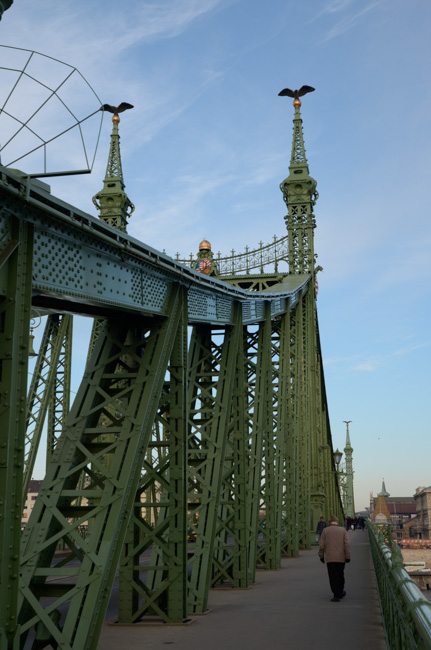 Walking back across the bridge to the Pest side of the city.

The bridge was once a toll bridge with "custom houses" built at either end. It was blown up by the Germans at the end of WWII, but not completely destroyed, and was the first to be reopened. 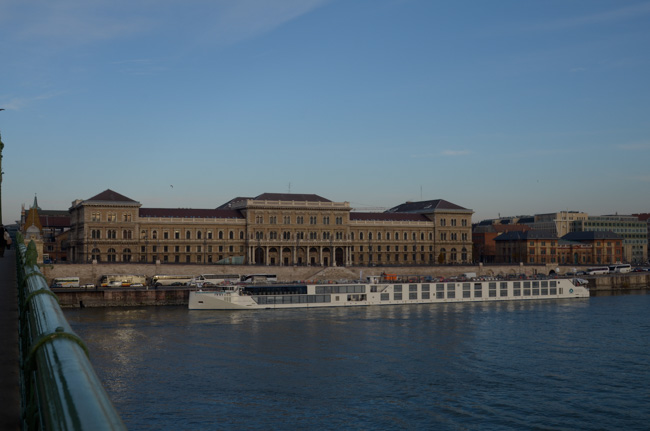 The Crystal Mahler moored in front of the main building of the Corvinus University of Budapest. It's a good indication of the size of our ship!

Our stateroom was on the upper deck immediately behind the public areas -- a wonderful location. 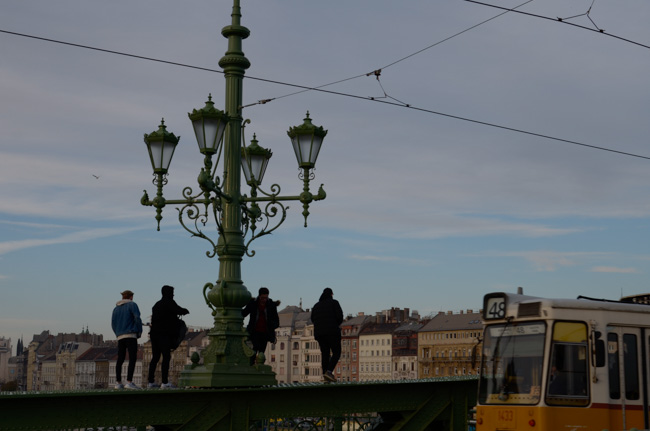 While crossing the bridge I saw these four youngsters walking along the trusses. They seemed to be having a good time stretching the boundary of safety, although they never did anything really dangerous. I watched them for a while wondering if they would try to climb up to the towers, which is something I might have done back in the day.

After a while I figured that if they DID do something stupid and there was an accident, I might be called as a witness, which would be a major inconvenience. That encouraged me to head back to the ship.

Besides, when they pulled out a camera and started posing for pictures of each other it seemed like they were pretty tame. 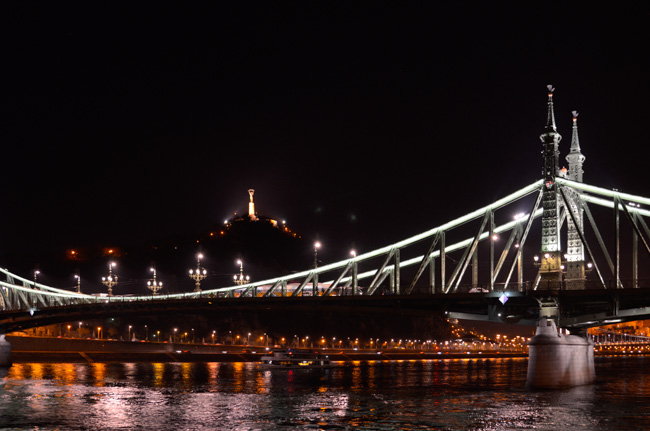 For our last night on the ship we had a beautiful view of the river, the bridge, and the Liberty Statue high on the hill.

Click for pictures of most of our Road Scholars at the last dinner.

The next morning we had to rustle out of bed for a 3:30am departure to the airport. Crystal Cruises provided us with an escort through check-in and finding our way through security. We certainly felt well cared for throughout the trip -- even to the very end.

Jim and I joked when changing planes in Amsterdam to go home: what, we have to do it all on our own! 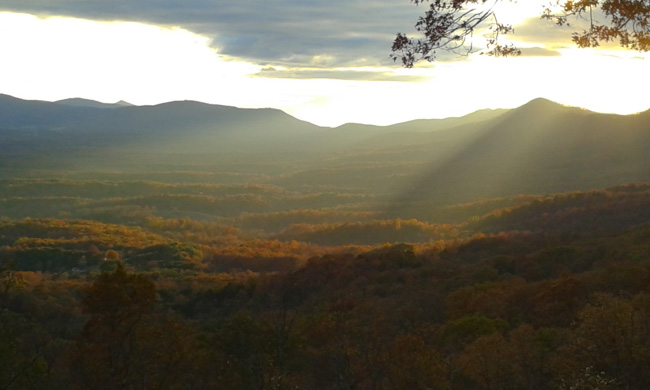 Since the best part of a trip is coming home, I always like to end with a picture of home. I was driving on the Blue Ridge Parkway from Bedford, VA, the week before our trip. It was so lovely I was having trouble keeping the car on the road so I pulled over and captured this picture with my cell phone.

The rest of the world is interesting and beautiful, but we are so lucky to live just where we do!