The second day in Vienna was the high point of my trip: a visit to the Spanish Riding School (SRS)! Performances are only scheduled on the weekends, but I signed up for the "morning exercises" and an afternoon tour of the facility and stables. I had reserved a spot for the afternoon tour well before we left home just in case it would be sold out. It wasn't. 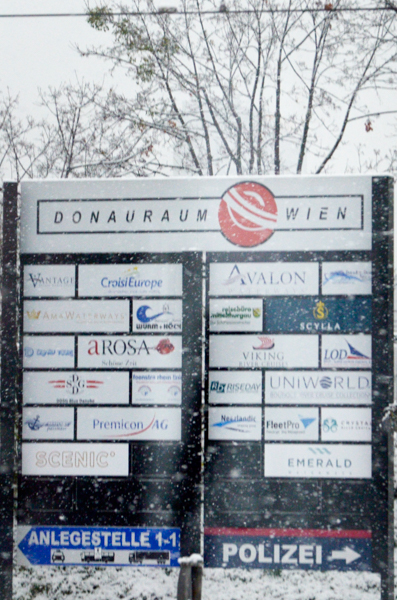 As we drove into the city that morning I caught this picture of the cruise lines that visit Vienna.

And what a snow storm! 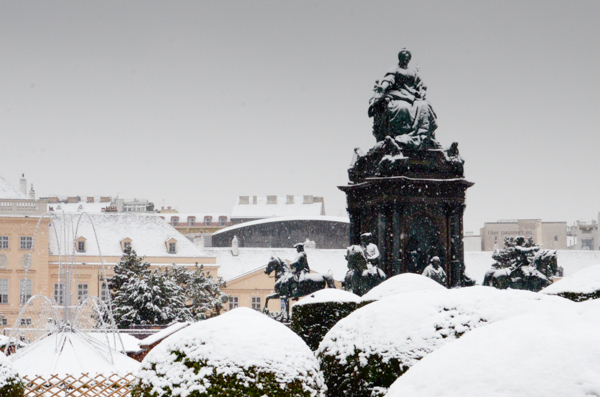 Since the morning exercises didn't start until 10:00 I joined the group for part of the Kunsthistorishes Museum (Art History Museum) tour. We found the Maria-Theresien-Platz in front of the museum covered with a dusting of snow.

In all of our discussions of history, we didn't hear much about Maria Theresa. There is an extensive review at the link, but it is mostly facts and figures without a lot of insight.

Jim had planned to spend the morning in the museum so that we could connect for lunch and the afternoon tour of the SRS, but he was feeling under the weather so stayed on the ship. 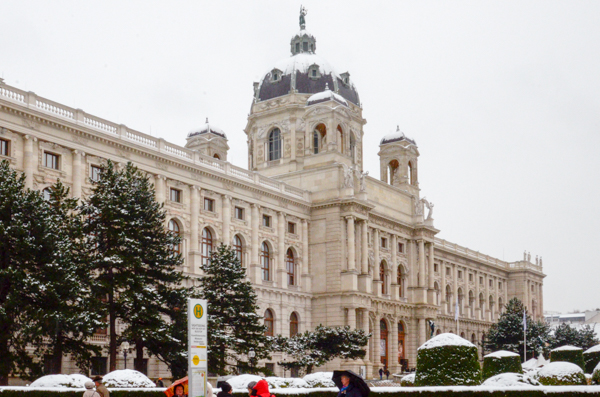 The Art History Museum is adjacent to the plaza. Our group tickets allowed us to visit before the formal opening times. This was the same benefit we had enjoyed in Amsterdam at the Rijksmuseum. While touring the exhibits it was easy to tell when the museum opened because people came swarming in! 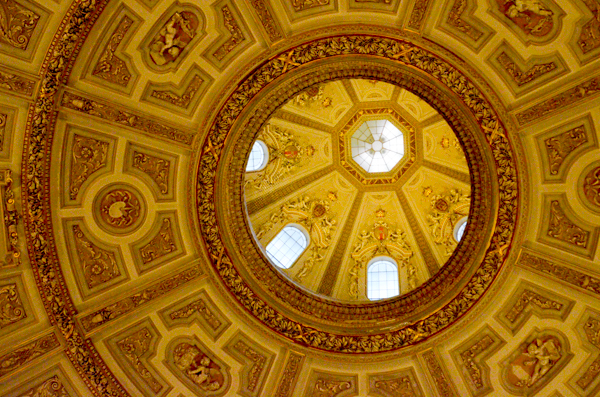 The rotunda dome of the Art History Museum. Click for my pictures of the collections.

The museum was so vast and confusing that I ended up being a little late for the start of the schooling session at the SRS, but there was still plenty of room.

No pictures were allowed during the schooling, but it was a wonderful experience. Two horses were working on their courbette movement. A YouTube video (opens in new tab) shows a variety of horses performing the movement, which requires great strength.

Most of the schooled horses were working on basic moves such as I might do with my own horses. It was great to see how they responded (or not) to their training. In addition to the seasoned performers there were many youngsters and also an apprentice rider. 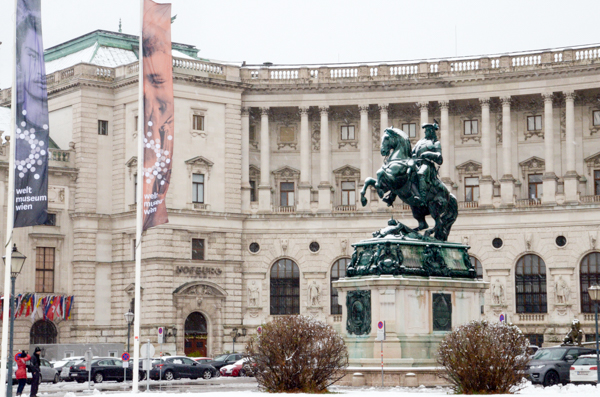 Prince Eugene in the snow. The sculpture really is as mediocre as our guide said the day before.

In the US there is a myth that the number of legs an equestrian statue has in the air indicates whether or not the rider was wounded or died in war. It isn't true in the US and our guide hastened to explain that it isn't true in Europe either. 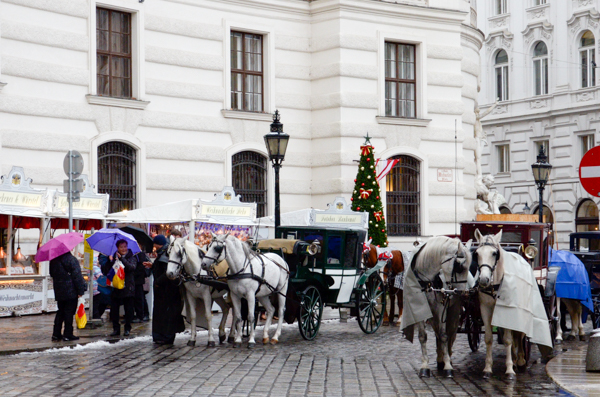 As I went to get a bite to eat before the afternoon tour, I walked through St. Michael's Plaza and noticed these carriage horses waiting in the rain and snow. They offered a working horse contrast to the pampered stallions stabled so close by. They may themselves be Lipizzaners that didn't make the grade. 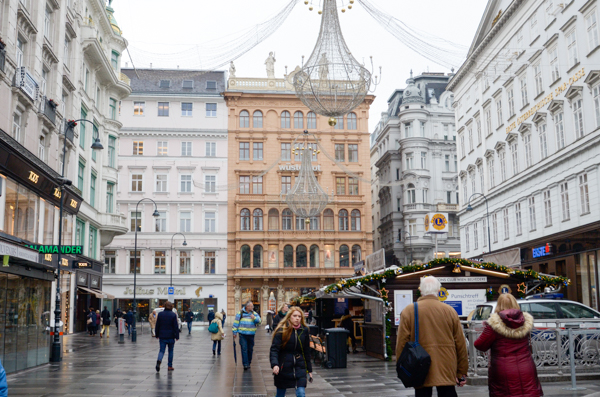 For lunch I stopped at the Kiwanis booth (really!) -- one of these on the Graben near the Hofburg. In the midst of elegant Viennese cafes I had a slice of brown bread with pimento cheese. It was delicious. The Lions' booth also had tempting offerings. 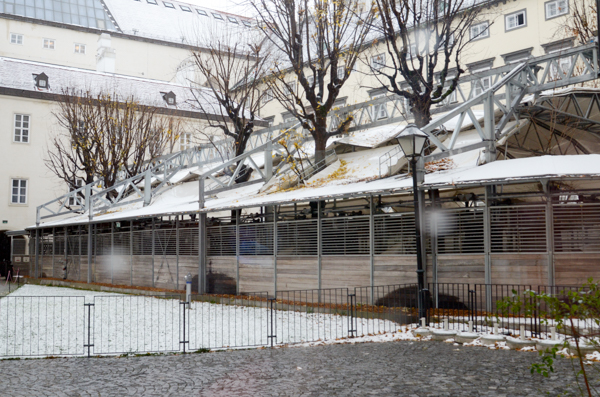 Not all the horses at the SRS are schooled every day. Some get outings in this mechanical exerciser. The exerciser shown at the link is not as elaborate, but it is similar in concept with the horses being placed in moving compartments without being tied.

Grooms retrieved their charges when they had their share of exercise. 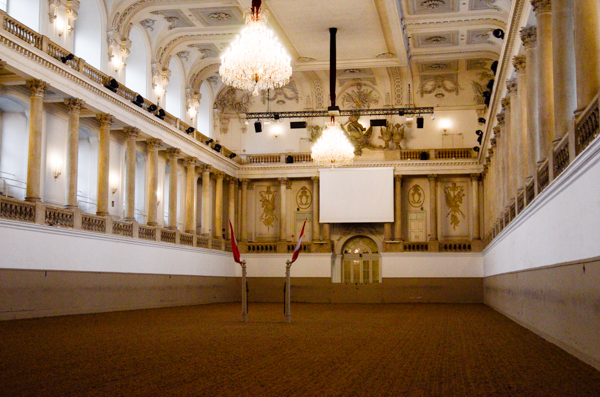 We could take pictures of the Baroque riding hall during the tour. The posts in the center are training devices, but they were not used in the morning schooling sessions.

The footing is a mixture of sand and fiber on a clay base. During the schooling they had a lackey on alert to clean up any droppings before they were trodden into the footing. 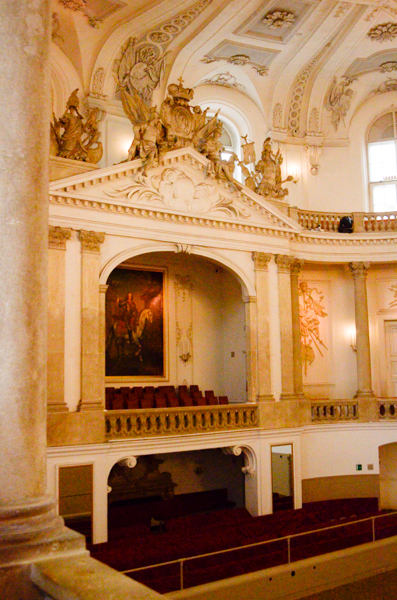 At the opposite end of the riding hall is a portrait of Charles VI of Austria. He commissioned the riding hall in 1729. Riders salute the picture as they enter the hall and before every performance.

Lipizzans are born in the standard horse colors of chestnut, bay and black with standard horse markings. The dominant grey gene causes the coat to lighten through shades of grey until it turns white. Their skin color remains black unlike the pink skin of a true white horse. Since the gene is dominant and since the breed has been maintained for 100s of years, the grey coat is common, but not universal. There is a tradition that at least one performance horse in training must be dark-colored. 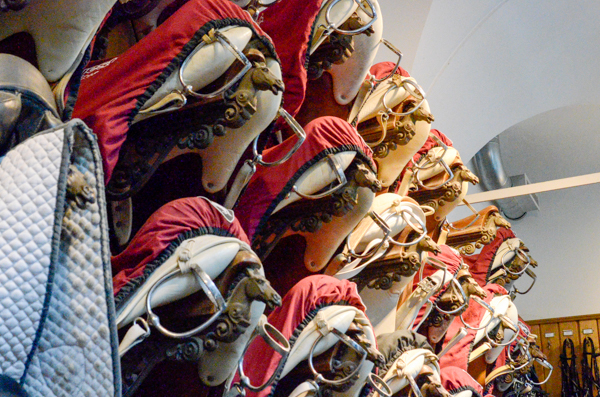 We weren't allowed to take pictures in the stables, but we could in the tack room. The white saddles shown here are custom-fit to each horse and used throughout his performance career, which can last 10-15 years. They cost about 10,000€ apiece.

For horses in basic training regular dressage saddles are used. 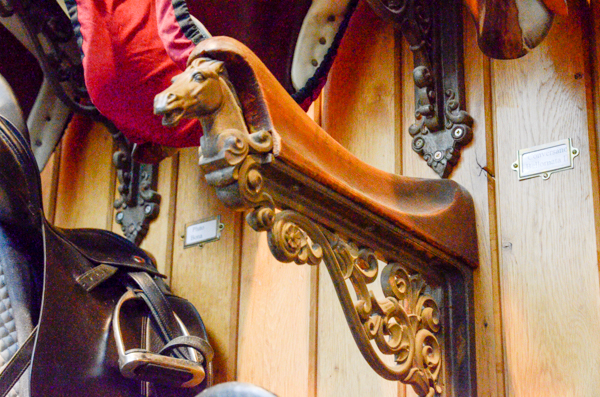 Wouldn't it be nice to have a snazzy saddle rack like this one! 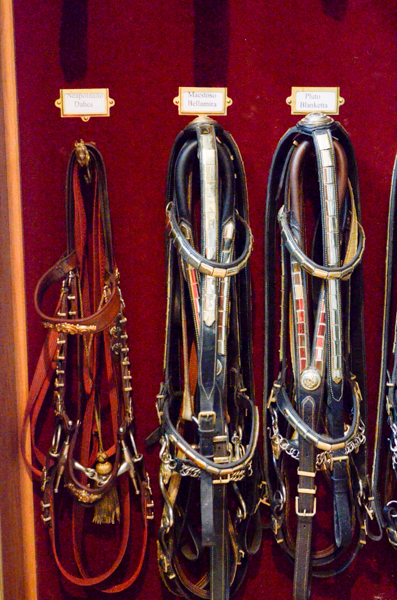 Each horse has his own bridle. The red bridles are used on particularly accomplished horses. 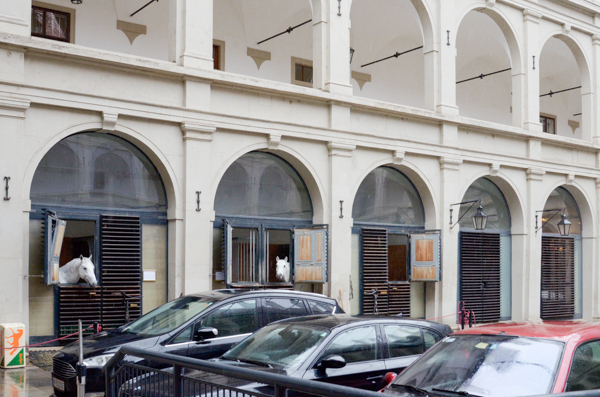 The stables are in this elegant building across the street -- not your downhome barn! The stables are on the first floor, SRS offices are above, and the third floor is rented out as office space. Not all the horses have stalls facing outside; most face onto an indoor aisle.

The horses don't spend the entire year here. They each have six months R&R in the country. Since they are the best of the breed, all the stallions are allotted at least one breeding season. Superior performers may get two or three.

Retirement age is around 25 years and they receive full retirement benefits. The oldest surviving performance horse at the time of our visit was well into his 30s. 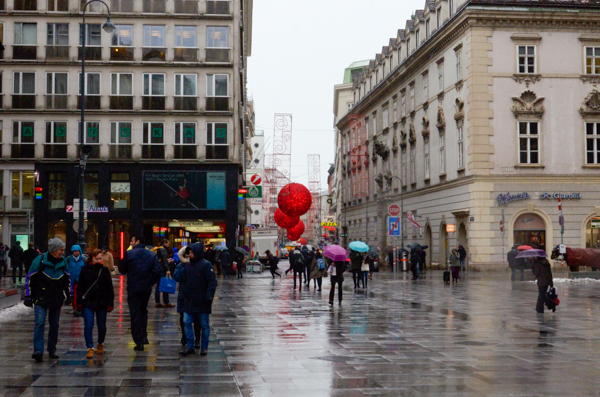 After the tour I headed back to the ship. The weather continued miserable, but the lighted red "balloons" led me to the shuttle bus.

After my return, Jim and I headed down to the Bistro Bar. There was a family onboard from Singapore with two young girls, maybe 7 and 9. They had never seen snow before so their dad had taken them out to make a snowman. They came bursting into the bar clamoring for hot chocolate, hot HOT chocolate! The girls and their delighted reactions to everything they saw and did added sparkle throughout the trip.

That evening we had a guided visit to the gallery at the Upper Belvedere Palace followed by a concert by the Schloss Schönbrunn Orchestra and the Wiener Volksoper Ballet. A delightful evening!