Across Europe in Luxury
Dürnstein

After our visit to the abbey we cruised the Wachau Valley. The river banks were filled with vineyards and orchards. It was a lovely afternoon.

At the end of the valley we visited the village of Dürnstein with its distinctive blue church tower overlooked by the ruins of an old fortress. 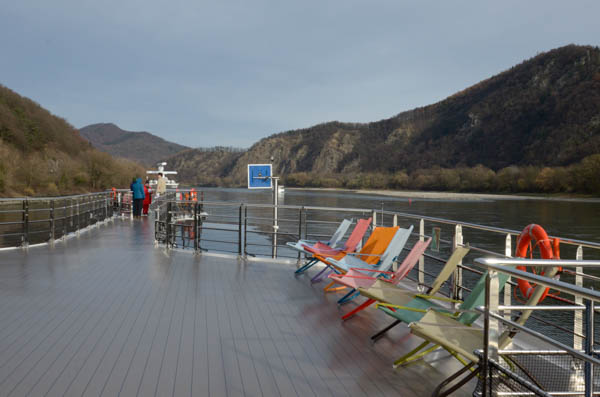 The valley has been settled since Paleolithic times and began to be cleared and cultivated as long ago as the Neolithic. Like so many places we visited on the trip, it has been designated a World Heritage Site.

The staff reopened the upper deck at Passau, so it was again possible to get upstairs for a full 360-degree view. The staff brought blankets to protect against the chill or those who stayed there throughout the valley cruise.

Grapes have been grown along the river beginning in the 9th century and it is now a major Austrian wine region. The ship offered a wine tasting as an option to the visit to Melk and one of our Road Scholars signed up for it. He enjoyed it very much and spent much of the afternoon trying to pick out which charming village had hosted the excursion. 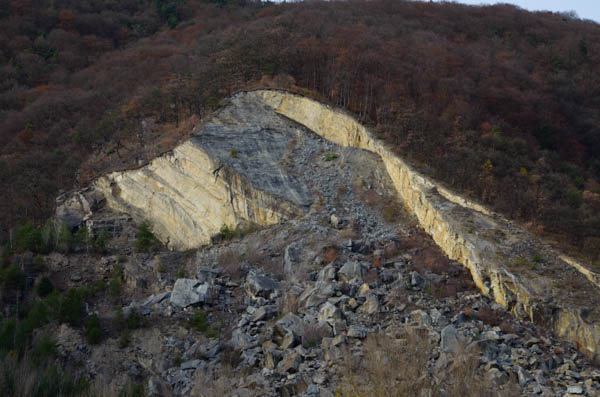 I was startled to see this ugly abandoned quarry in the midst of the scenic beauty. The application to UNESCO for heritage status states: "Irreversible, visually very aggressive uses, such as quarries, have been abandoned; their sites are being reintegrated into the texture of the cultural landscape in the course of recultivation." This abandoned quarry near Spitz will be hard to "recultivate."

While trying to identify the quarry, I came across descriptions of the Mauthausen concentration camp, located near Linz at the entrance to the Wachau Valley. The Nazis worked prisoners to death in its quarry. It's a grim reminder that the very beautiful and the very ugly can be very close.

This quarry was not associated with Mauthausen. 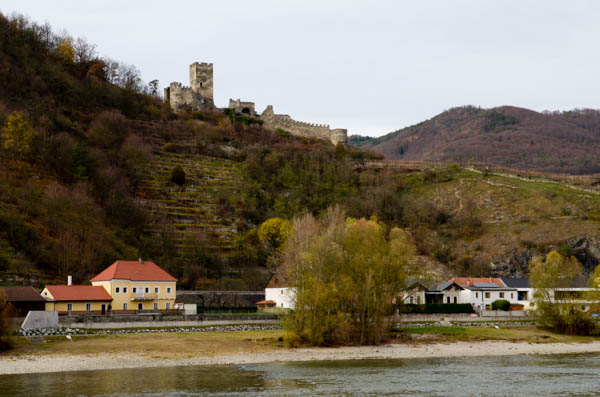 As on the Rhein, castles loomed on the high places.

One of the travelers who joined us in Nuremberg asked if the Rhein and Wachau valleys were comparable. Yes & no. The Rhein gorge was more spectacular in my thinking. 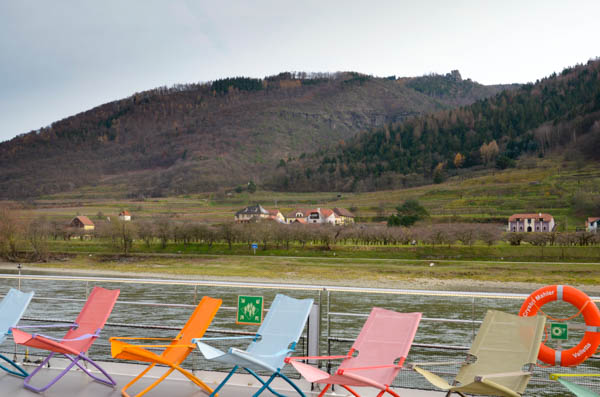 The area is also known for its orchards. Apricots are a major crop.

The Bailoni distillery is the oldest in the Wachau region. We were delighted to see it. On our skiing honeymoon many years ago, we had a harrowing bus ride over a snowy pass in Northern Italy. A friend recommend the liqueur as a nerve-calming device. It must have worked because we survived the trip. We still have that little bottle as a memento. 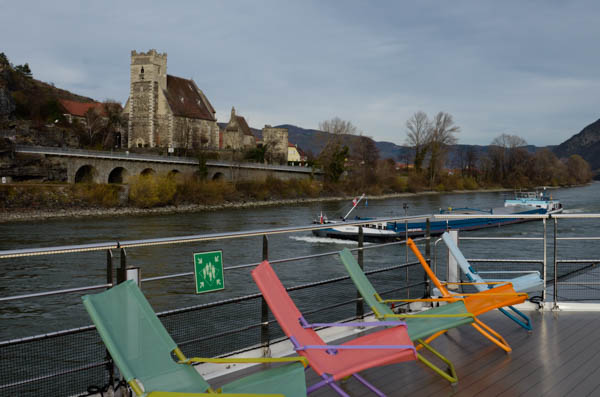 We continued to see freight traffic, but not as much as before. 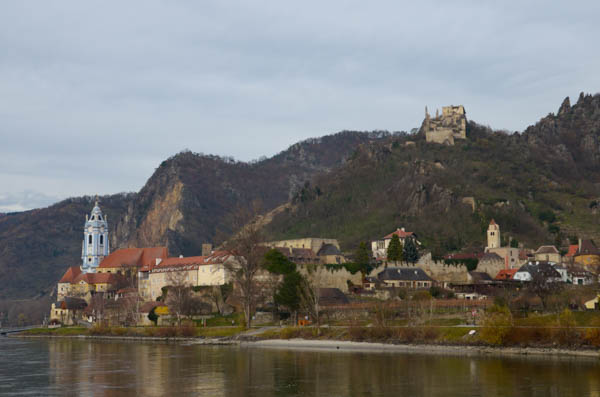 Our afternoon destination was the village of Dürnstein. The ruined fortress on the hill once imprisoned Richard I of England who had offended the Duke of Austria. The ransom for his release funded many infrastructure improvements to medieval Austria.

The blue tower belongs to the former Augustinian Dürnstein Abbey. It is now a parish church, but still under the umbrella of the Augustinian canons. 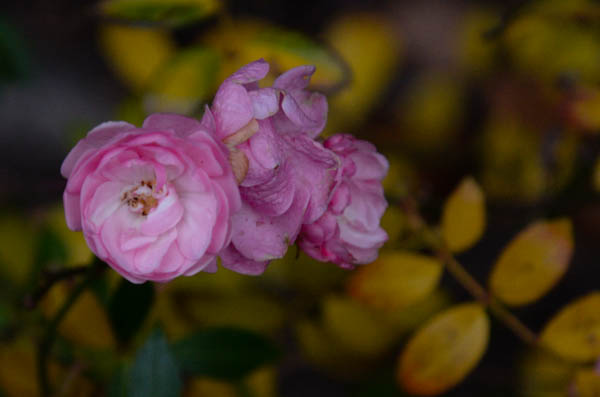 It may be almost December, but the mild climate of the valley allowed some flowers to remain. I had a rosebush at our house in Reston, VA, that bloomed well into the fall -- once as late as Thanksgiving. 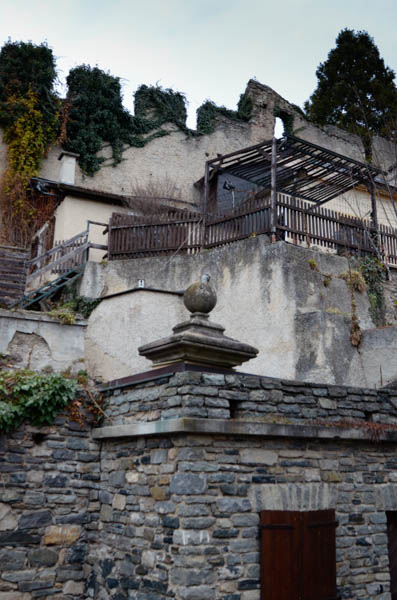 The crenellated town wall is in the background. The wall was used as part of adjacent buildings. 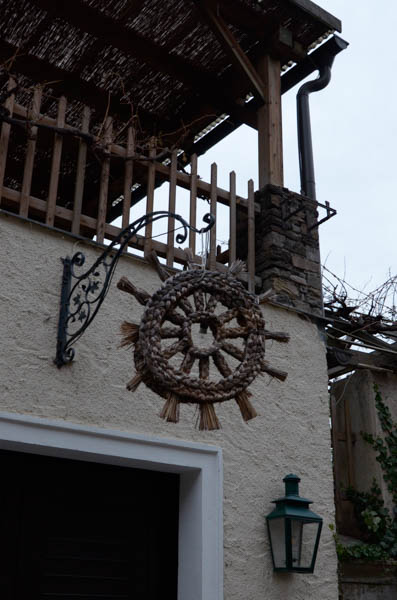 This was our first introduction to Heurigen, or wine-taverns. We were to see more of them outside Vienna. The straw wheel indicates that the tavern is open. Local shops opened specially for us and a Viking Cruise ship visiting at the same time, but Jim and I didn't visit any.

Since our cabin was on the river side of the ship and right across from a couple of the Viking cabins, we tried to peer in to get a comparison. Rats! They kept the curtains closed!

One thing we did notice is that their cabins all had balconies. That sounds good, but it takes away from the interior cabin space. At this time of year it is wasted. The Crystal Mahler didn't have balconies, but the upper half of the picture window slid down to make the entire cabin an open-air space -- complete with a retractable screen to protect against mosquitoes or adventurous birds. We thought that a better plan although we couldn't take advantage of it because of the cold. And rain. And snow. 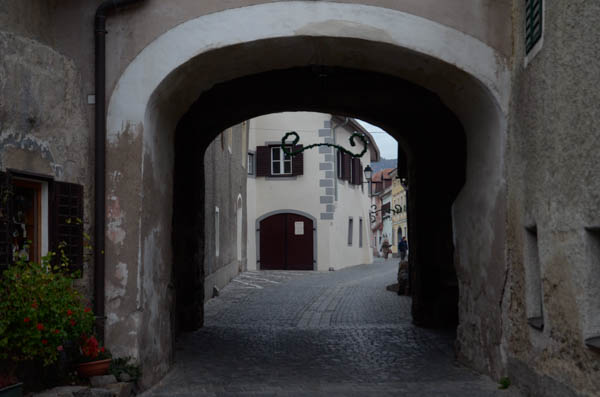 This gate was once the main thoroughfare along the river, but in the mid-20th century a tunnel was put through the mountain to bypass the town. The tunnel was closed not long after our visit for repair and traffic was routed through town again. The repaired tunnel is back in service to the relief of all, I'm sure. 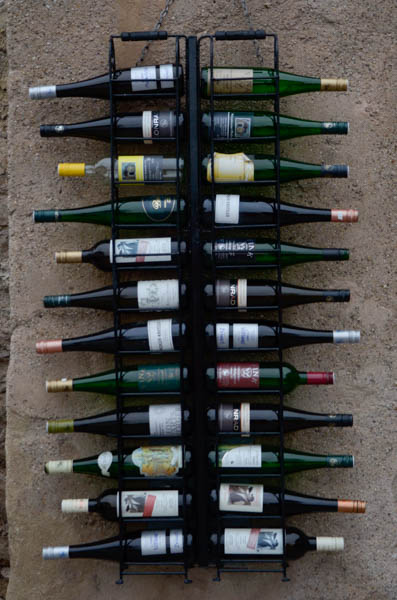 An attractive and clever way to display wines. It was tempting to swipe a bottle! 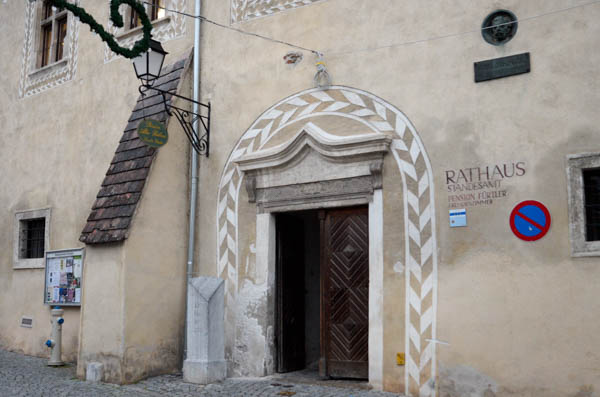 The old town hall is now a guesthouse. The sgraffito decoration was very attractive. 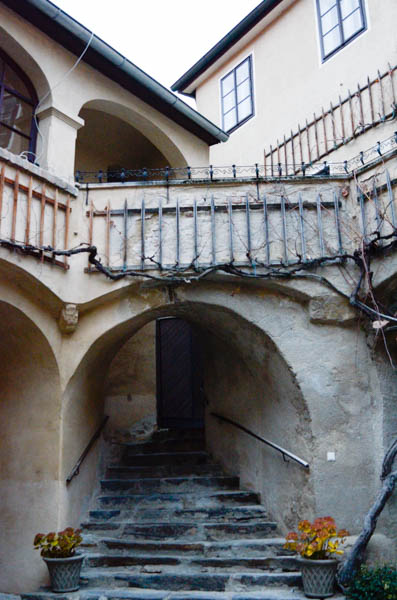 We wandered through the open door of the old Rathaus to find this courtyard. Imagine what it's like when everything is green and flowers are everywhere. 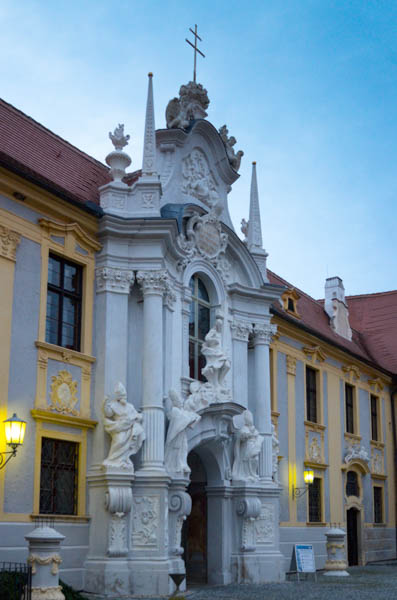 The entrance to the cloister. This was also the way to the abbey church, which we would visit later. In recent years it has become the parish church. 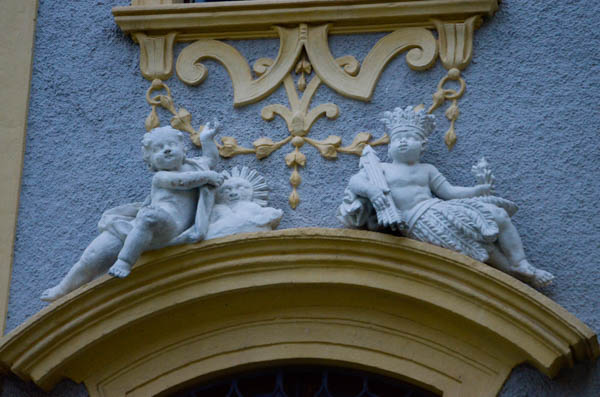 Four decorated door pediments represented the four seasons and the four known (at that time) continents. The cherub on the left represents summer and the figure on the right represents America. We saw numerous such representations and they all featured an "Indian" figure with prominent tobacco leaves. Several of them also included indications of cannibalism because the Native Americans were considered to be cannibalistic. At least this one doesn't go that far!

In a hallway I found a poem, based on the writings of St. Augustine: 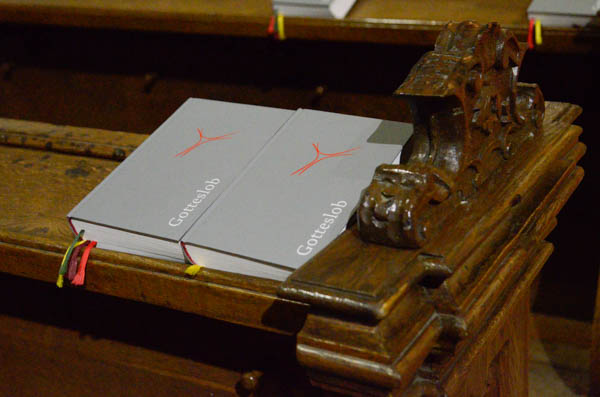 But I was outside,
I was not beside you.
You ripped apart my deafness
And I breathed you in;
Now I pant for you.

After our tour we enjoyed a concert on the original 1724 Christof Pantzner organ. It was much better than the Regensburg concert.

We walked along the river to the dock in the dark. Our ship is closer to shore with the Viking ship is beside it. Later in the evening the Viking ship cast off and headed upstream. We turned and cruised downstream toward Vienna.

Ships are required to dock facing upstream regardless of whether they will eventually be going downstream or not.