The afternoon program was a ride on the restored Colebrookdale Railroad between Boyertown and Pottstown. This was irresistible to us because, besides being a railroad excursion, some years back we had spent several days in Ironbridge, England, where the original Coalbrookdale (note the variation in spelling) is located. 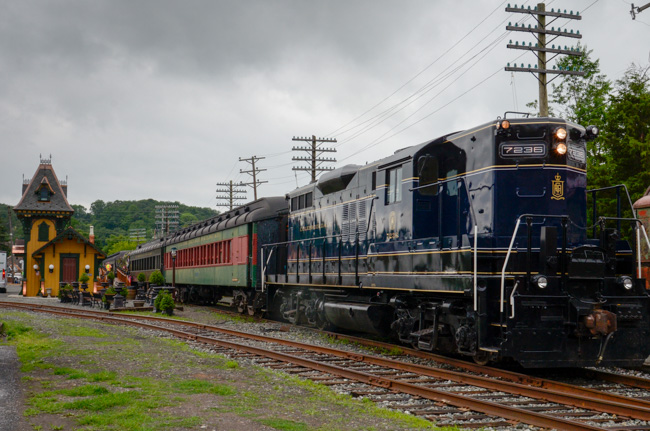 The train comprised an engine and four cars, all painstakingly researched, restored and operated by volunteers. 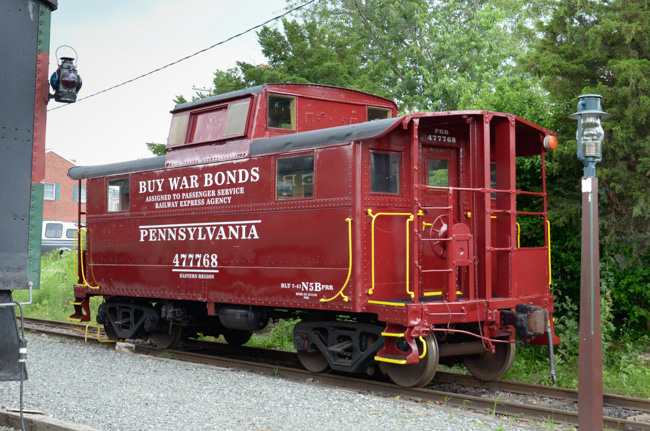 This caboose was one of the newer restoration projects. Pretty spiffy! 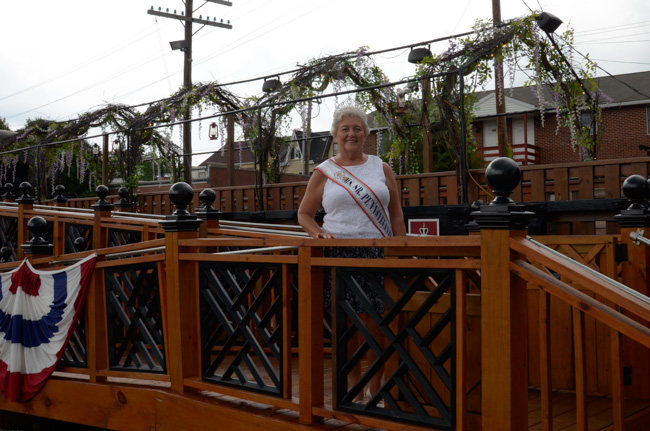 Although we were a large group, there were other passengers as well. One was Ms. Senior Pennsylvania who came replete with sash and tiara. She graciously consented to pose for me. I had not been aware of the Ms. Senior America pageant, but I am glad to know that I have reached "the age of elegance" as they characterize it.

The elaborate ramp to load the train makes it wheelchair accessible. The open car shown here was the one where I spent the entire excursion as none of the inside cars were air conditioned. It was a hot and steamy afternoon even though we dodged the rain. 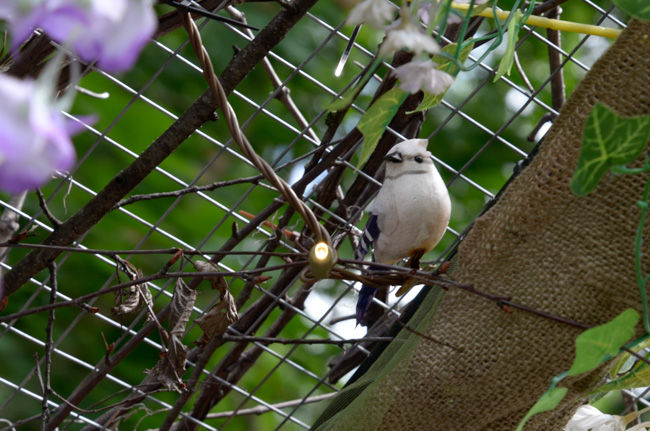 The garlands coveromg the open car had little surprises tucked away among the wisteria. I loved this little titmouse figure. There were also tiny "nests" and eggs here and there. 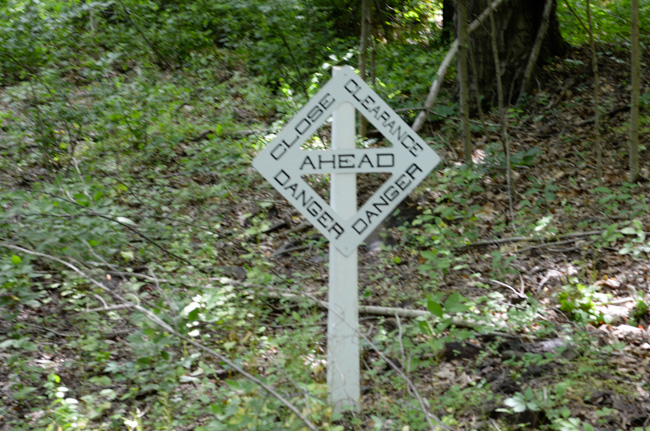 The railbed was dug by hand through several serious rock faces. Returning soldiers from the Civil War were glad to find jobs, but they didn't dig or blast any more rock that they absolutely had to. The joke was that if the cars had an extra coat of paint they could not pass through the cuts.

We were continually admonished not to hang over the railings or allow any body parts to protrude beyond the cars. 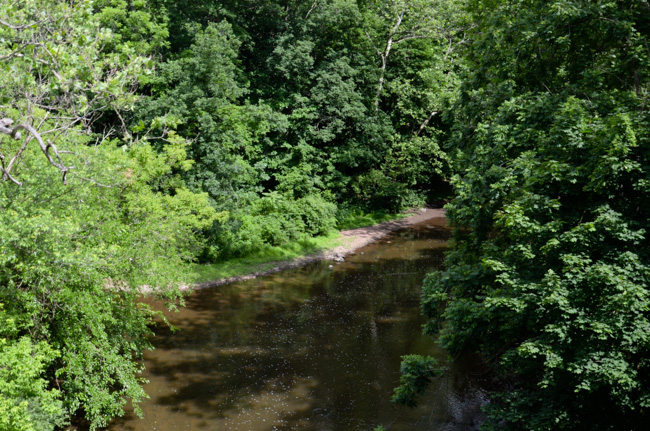 When the area was developed for industry in the early 18th century, water provided both power and the means of transport. The railroad line was constructed in the mid-19th century parallel to Ironstone and Manatawny Creeks. The first ironwork was built in 1715 on this creek. Prior to the Revolution the Schuylkill Valley was the major source of iron production in the colonies.

Ironically although success in the Revolution was dependent on the iron produced here to equip the American armies, the years following independence were the beginning of decline. With expansion no longer restricted by British colonial policy, industry expanded westward and newer furnaces and foundries were built with more efficient technologies.

An industrial site once served by the railroad. The overgrown tracks are still visible.

One of the goals of the Colebrookdale line is to re-establish freight service as the Eastern Berks Gateway Railroad via a connection with Norfolk Southern. 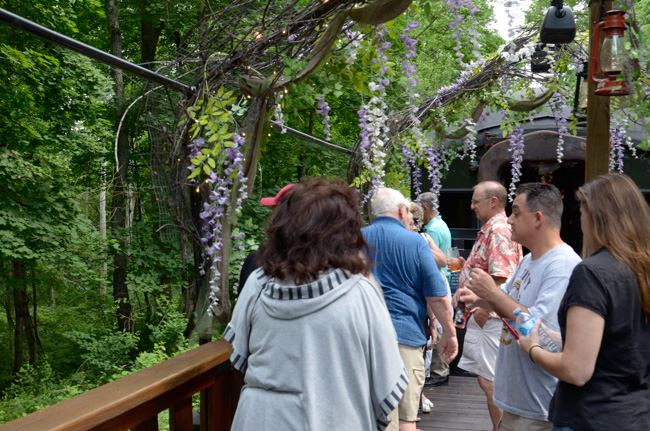 Folks enjoying the scenery. Earl Kline, wearing the red-flowered shirt, was the organizer of the weekend. He has coordinated many of these reunions, but he claims this one will be the last. He said that last time too. We'll see. He did a great job - as usual. 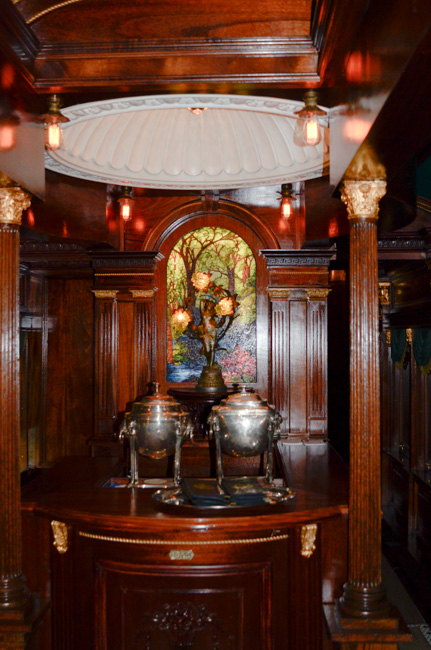 This is the beautifully restored first class car. Unfortunately there doesn't appear to be an inventory of the rolling stock online. It would be interesting to see the history of the various cars. 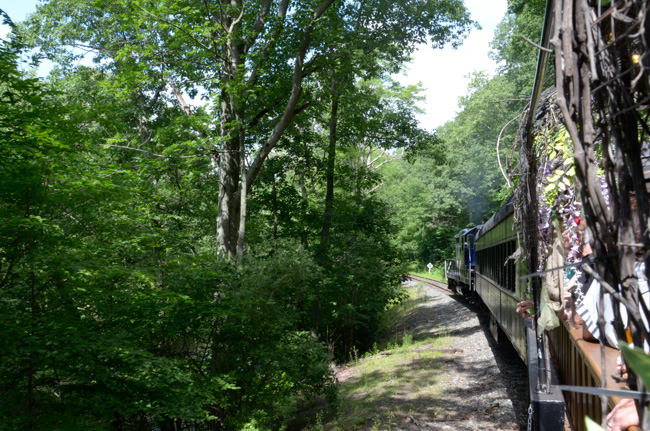 A view along the train as we proceed toward Pottstown. The line was pretty straight throughout the trip, so it was hard to get a good picture looking along the train. Especially since we weren't supposed to be leaning out of the car!

It would be an interesting excursion in the winter to allow for easier viewing of the sights along the line. In the summer everything is pretty leafy.

A friend of Jim's who lives in the area said that in the spring they run special "mudball" excursions for children who are given balls of earth containing wildflower seeds. They are then encouraged to throw them along the track -- hoping to seed a blooming crop of wildflowers. 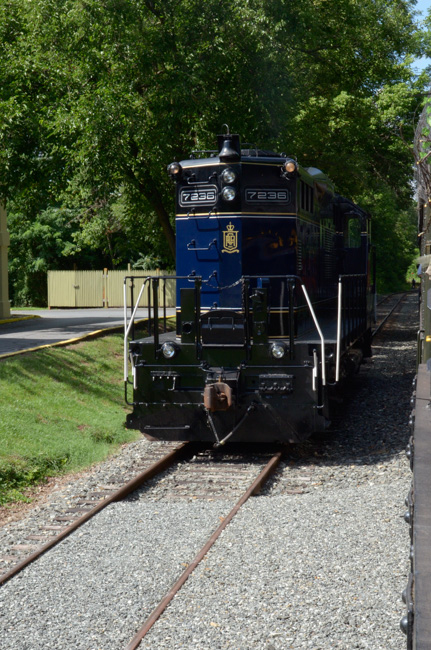 At the two ends of the run the engine was uncoupled and run along a siding to switch ends. We had some discussion about whether there was a turntable at either or both ends to actually turn the engine around.

Since the engines can pull equally well in either direction I voted for no turning. Based on my pictures I can now say definitely that the engine does not in fact turn around.

I was glad to see that the locomotive was a diesel-electric. I think steam engines are over-rated. 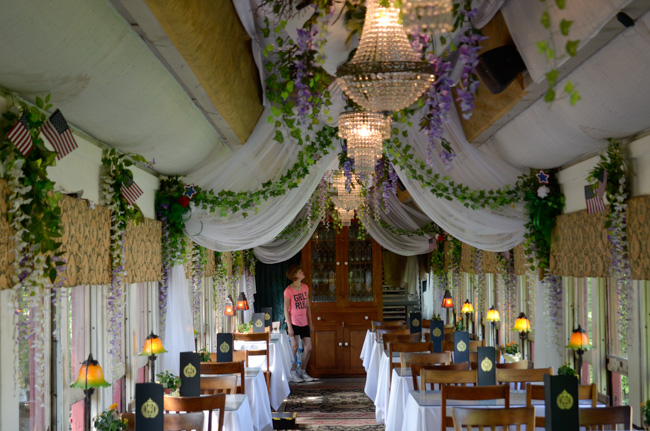 The dining car was also elegantly restored. One of the volunteers told me that it was soon to be taken out of service for an update. They have a new one waiting in the wings.

We didn't have any sit-down meals included in this excursion, but the volunteer staff was busily taking orders for water, beer, wine and packaged snacks. 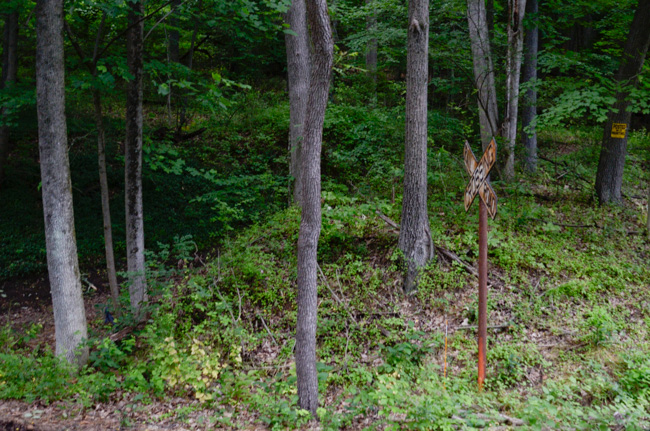 At one time this was a major crossing, but the road is long closed. The only remaining indication is the old crossing sign. Work is underway to reopen the road for hikers. There are grand plans to make the entire valley into a destination. The railroad is only the first step. We may have to come back in a few years to see the progress. 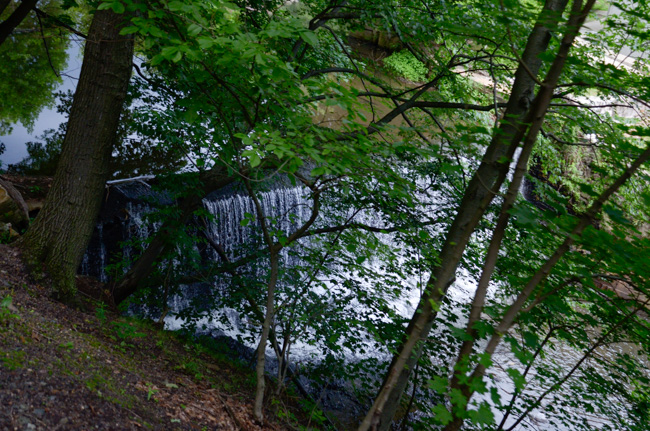 A grist mill along the track is still standing and the dam is still functioning. On our way to Pottstown a young boy came out to ring the bell to welcome us. I wasn't quick enough to get his picture. 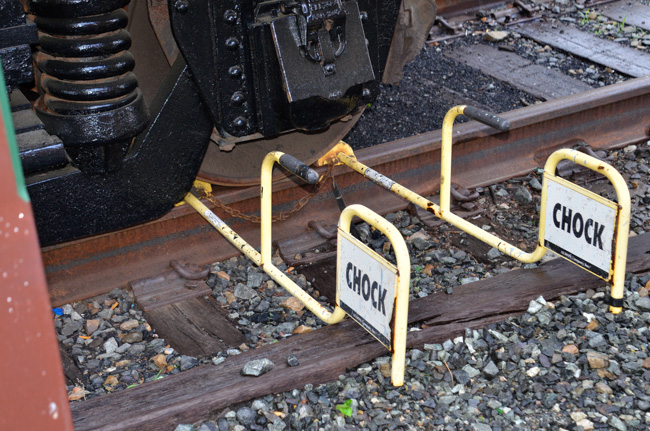 I had never seen chocks designed to be used with a train before. That car isn't going anywhere soon!

After the train excursion most of our group adjourned to the Durango Pub adjacent to the tracks where we met classmates who had not chosen the rail excursion. A good time was had by all and a significant contingent elected to progress to the Pottstown Elks Club for partying into the evening. We progressed back to our inn and called it a night.