On Our Own
Ironbridge - Part 1 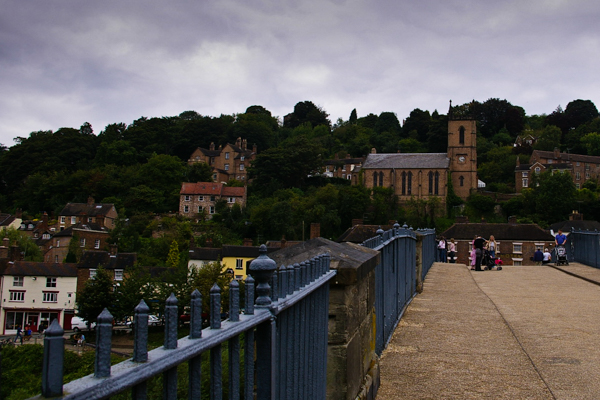 Ironbridge, located on the Severn River in a valley that contained the magic ingredients of iron ore, limestone and coal, can justly be called the birthplace of the Industrial Revolution.

200 years ago this view across the iron bridge that gives the town its name would have shown a town blackened by soot and glaring from the flames of furnaces. It is now an idyllic-looking village that preserves many relics of this industrial explosion but few active manufactories. One exception is the Aga Stove foundry. 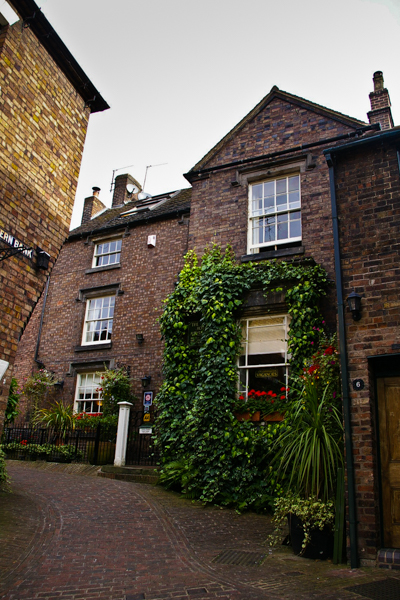 We had reservations at The Library House B&B. I was fascinated about the process of booking a room. Prior to our trip a WWW search for B&Bs in Ironbridge turned up several possibilities. I sent email to a selection of likely prospects and this was the one that responded. They accepted the reservation just on my word (or email, to be exact) and without a credit card deposit. Very civilized. It was a lovely place too.

Unfortunately, as I mentioned earlier, I got confused about dates and we arrived a day early to find that they were booked until the day we had reserved. Oops! 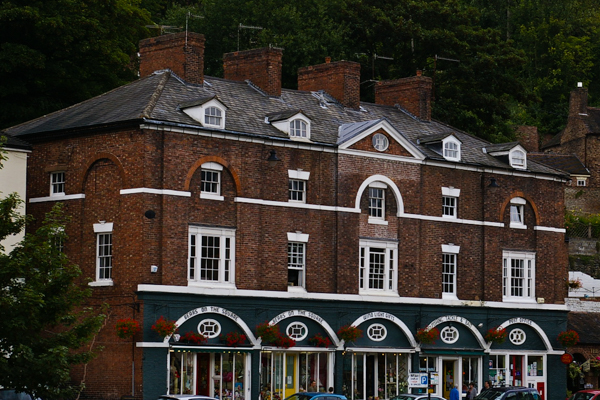 We got a listing of local accommodations from the tourist office. After lunch at a nice pub overlooking the river we put our new UK cellphone to work calling about a dozen establishments before we found one that was available in our price range. It was the Post Office House located in the right-most third of the Post Office building. It was run by the postmaster and his wife and was also very pleasant although not as upscale as the Library House. 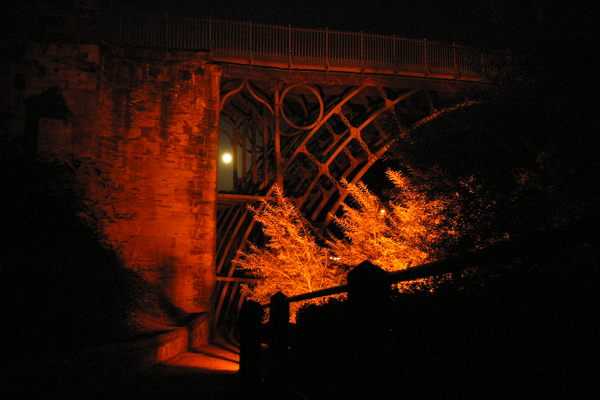 The Iron Bridge, shown here at night, was a technological wonder when it was built in 1779-1781. It was the first arch bridge to be built of cast iron. The iron was produced and cast locally at the Coalbrookdale foundry founded by Abraham Darby and then under the management of Abraham Darby III.

In its heyday, there would have been little night sky in the gorge due to the many furnaces that lined the river.

The bridge was used for vehicular traffic well into the 20th century. 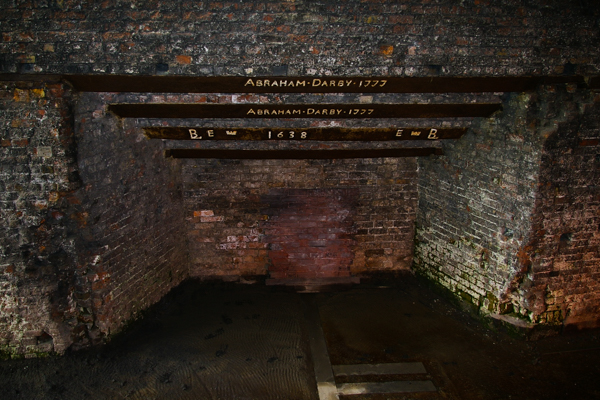 The original furnaces in Coalbrookdale were charcoal-fired, but the trees were soon cut. The readily available coal and limestone, along with the presence of streams for water power and the Severn river for transport led to the development of coke-fired blast furnaces with water or steam-driven bellows. These furnaces could be run hotter and were more efficient. (There was once a cool animation at the link of how a blast furnace works. It no longer runs, but the diagram is still of interest.)

The molten iron would come out of the furnace and run into the "pig bed" channels at the bottom of the picture.

The existing ruins are not original as the furnace was continually enlarged and rebuilt as technology improved and additional capacity was needed. 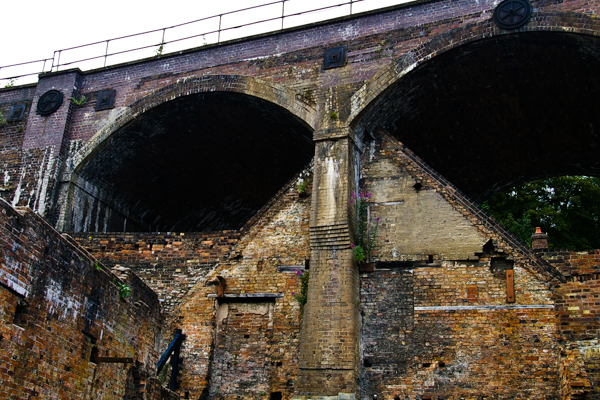 This bridge was built much later than the furnace buildings. On the far side of the bridge is a reservoir that supplied water for the bellows. The water channels are still there and the sound of rushing water is apparent to the visitor. 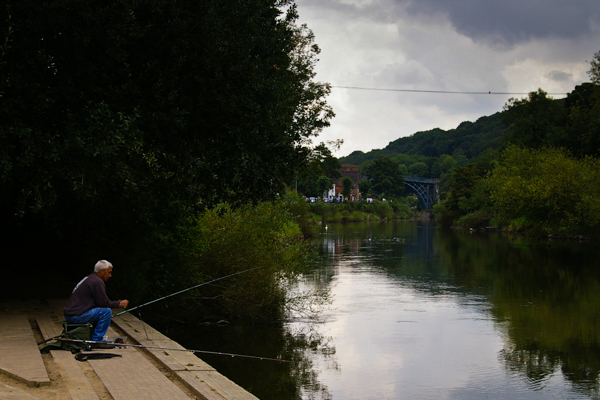 At the time that the Ironbridge Gorge was in full production the Severn River was navigable by substantial boats. It has since silted up considerably. This gentleman is fishing off the loading dock below the Coalbrookdale industrial area.

This dock shows one of the many variants of "railroad tracks" that we saw in the gorge. Here the tracks are recessed into the stone pier. During the time that this area was active, there was great evolution in industrial methods as discussed above with the use of coke instead of charcoal and the introduction of blast furnaces. We'll see more about the evolution of railroad tracks. 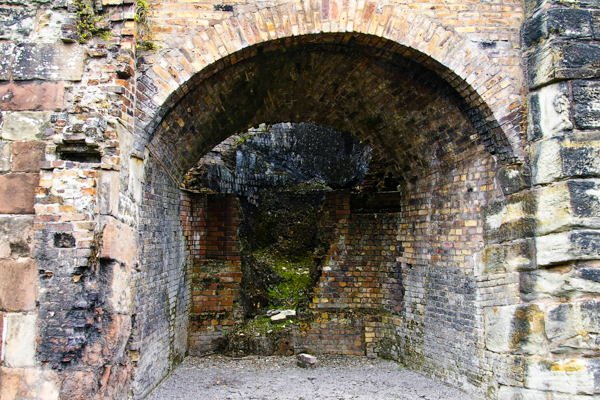 The Bedlam furnace complex was located downriver below Ironbridge.

The painting Coalbrookdale by Night by Philip James de Loutherbourg shows how this valley was far from bucolic back in the day. 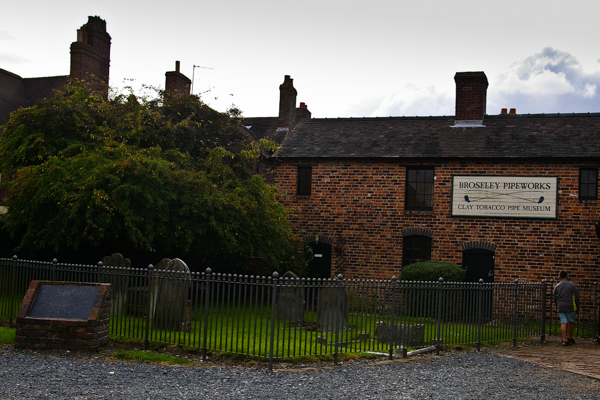 The advantage of having a car meant that we could cross the river and visit Broseley, the location of a factory that produced clay pipes such as the so-called churchwarden pipes. Follow the link for an interesting history of clay pipes and how they are useful to archealogy. 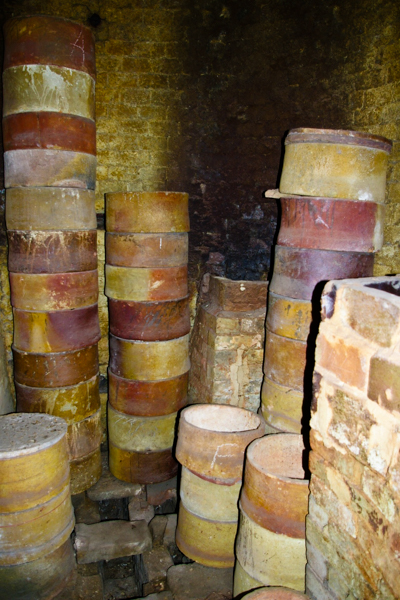 Workers packed the fragile "green" pipes into these containers and placed them into the kiln for firing. The vented floor enabled heat to circulate evenly throughout the chamber.

The exterior of the kiln shows the fire box and the breathing holes used to feed the flames. Such kilns were often double-walled although I don't remember if this one was or not.

The pipe works at Broseley were abandoned quite suddenly. We could see work in progress on the tables as we toured. 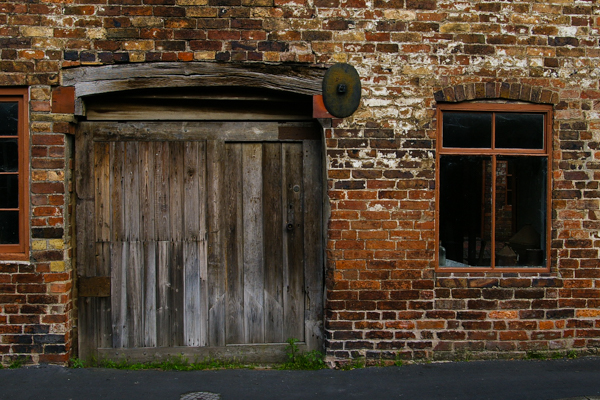 This door opened into the work space at the pipe works. No particular significance that I remember, but I really like the picture, so here it is!

The next day we walked along the valley toward Jackfield, the site of different kinds of industry.

The Ironbridge Gorge has been the site of extensive mining since medieval times. This, plus the loading of the land by heavy industrial construction, mine tailings, etc., and the occasional floods of the Severn, have caused subsidence. While we were there, two major roads were closed for repair. This one was still open – bumps only, no sinkholes or sheared pavement! Problems were especially evident in Jackfield.

At one of the museums we saw a spectacular film of buildings collapsing as the ground failed. Major failures, resulting in the loss of houses, have occurred as recently as the 1980s, with major events occurring roughly every 30 to 50 years. One landslide in the 18th century actually blocked the flow of the river and caused it to cut a new channel. 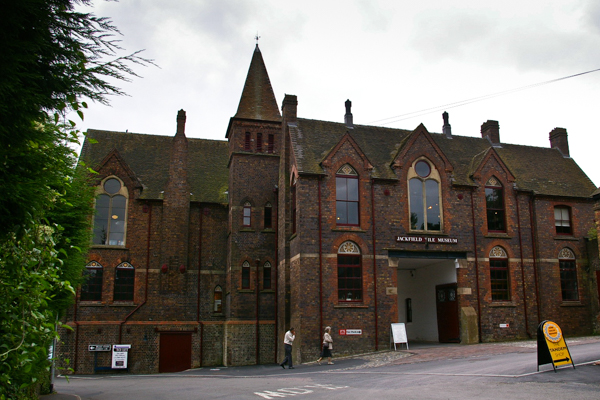 The ceramics industry in Jackfield is thought to date back to the 16th century and it became a major center in the 17th century. The facility currently used as the Tile Museum was completed in 1874 on the site of an earlier tile factory. Craven Dunnill & Co. originally operated this facility, but abandoned it in the early 1950s about the time that a major landslip destroyed much of the housing in the area. Now that the buildings have been restored by the Ironbridge Gorge Museum Trust, Craven Dunnill is again manufacturing tiles here. 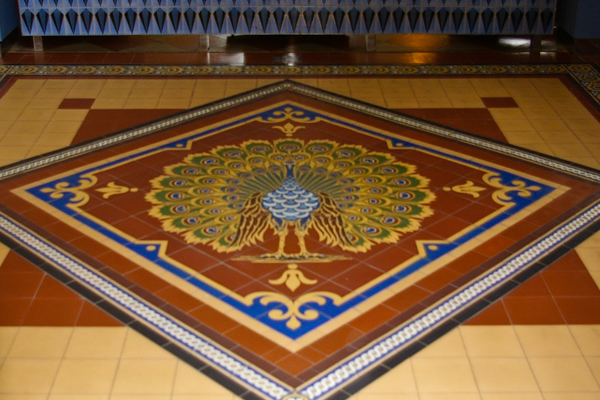 This arrogant bird made of encaustic or inlaid tile greets the visitor. The original show rooms had a great variety of offerings. 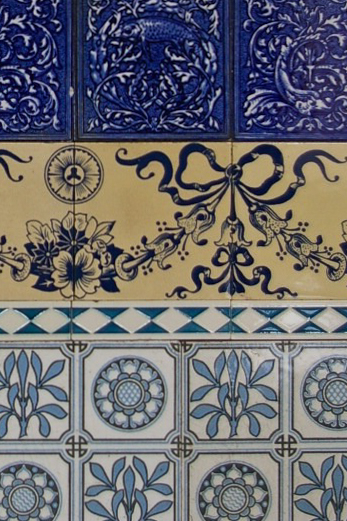 This display is a small sample. At the time we took this trip we were very frustrated at trying to find cobalt blue decorative tile for our kitchen, which was being remodeled. No, we didn't order any of these, but I thought about it! 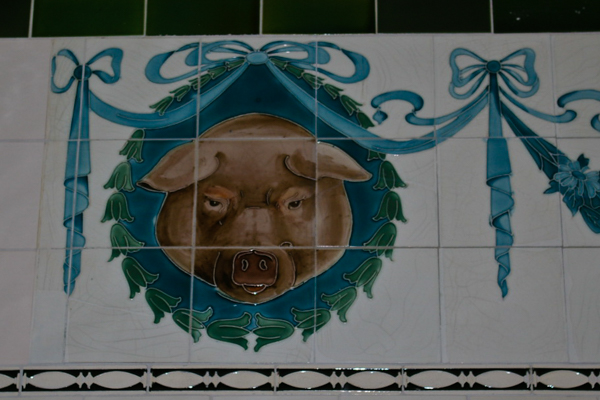 A mock-up of a butcher's shop illustrated how tile could be used. The pig looks like he knows what's in store for him. 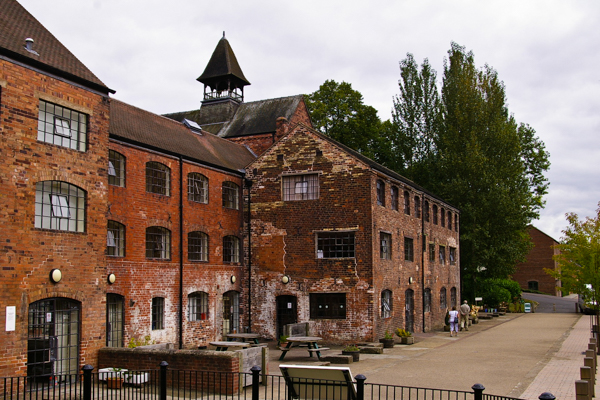 The Coalport China Works,originated here in the late 18th century. Two brothers, John and Thomas Rose, ran independent enterprises until 1814 when John bought out his brother. The factories at Coalport continued to produce ornamental and everyday wares until after WWI, when they closed and production moved elsewhere. Coalport China eventually became part of the Wedgwood Group. 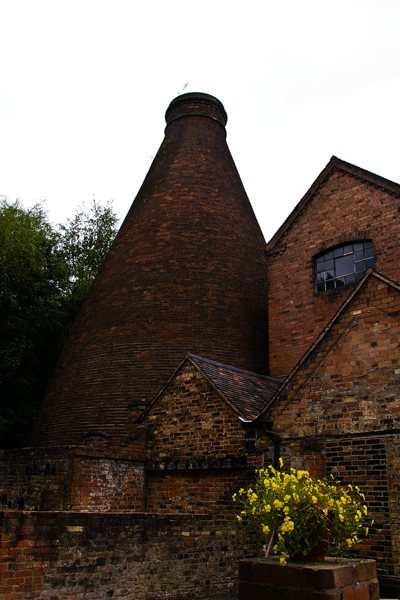 The kilns at Coalport were much larger than the ones at the pipe works. These are double-walled.

As we walked along the river we passed this family group having a grand time skipping stones across the river. It is impossible to imagine what this place would have looked like at its "height." No trees. Barges up & down the river. Smoke. The stench of burning coal. Children working in factories instead of spending the afternoon with grampa. It makes me hopeful that someday we can repair much of the damage we've done to the earth by our inefficient and wasteful production methods and improve our standard of living at the same time.

Click to continue visiting more of this fascinating place.