We joined our fellow travelers in Lyon. where a local guide and bus met us at the airport. After picking up the Lyon extension folks at their hotel downtown, our bus left in the pouring rain and headed for the mountains. As we traveled up, up, up, rain turned to snow and roads became treacherous. Not as treacherous as our fellow drivers who stopped in the middle of the road to put on chains! Our intrepid driver dodged the obstacles until arriving at one spot where BOTH lanes were almost blocked. Concerned that the bus would lose traction on the steep road, he leaned on his horn and slithered between stopped cars to much applause! We were relieved to arrive safely at our destination. 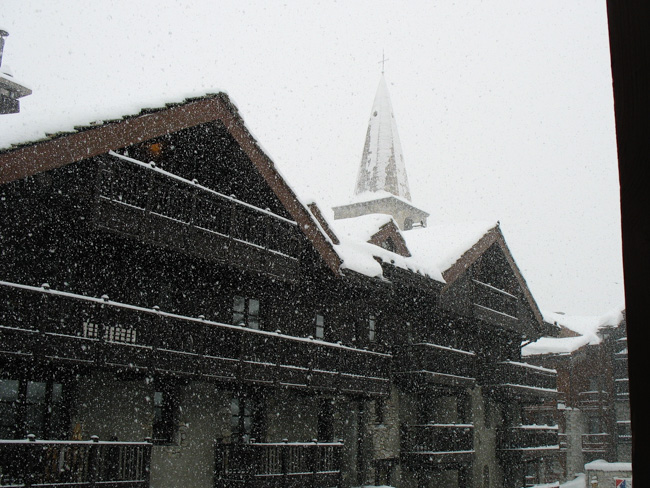 Heavy snow continued for two days (this view is from our hotel room). Although most of the group made an effort to ski at least a bit, it wasn't much fun.

Our only injury occurred on the first day when one of our number slipped on the icy steps of the hotel, fell, and broke his femur! He spent the rest of the trip in the nearest hospital after surgery to repair the joint. The surgery went well and he has recovered fully and is back to skiing! If you must have a serious orthopedic injury, do it at a major ski resort! 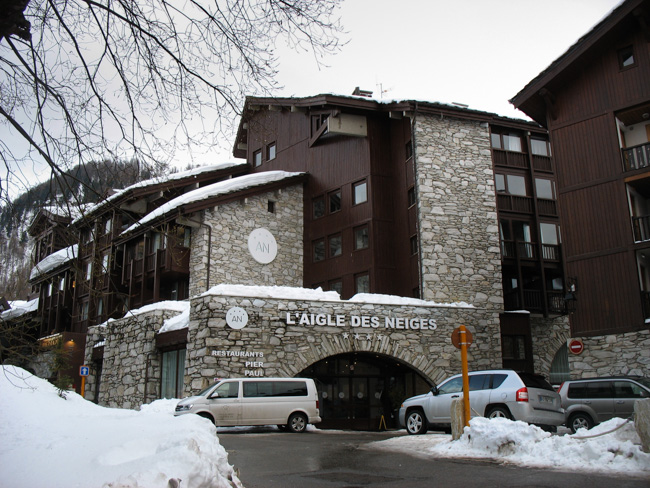 Our hotel was comfortable and well-located a short walk from the lifts and downtown. Early in the week we could ski almost to the front door. 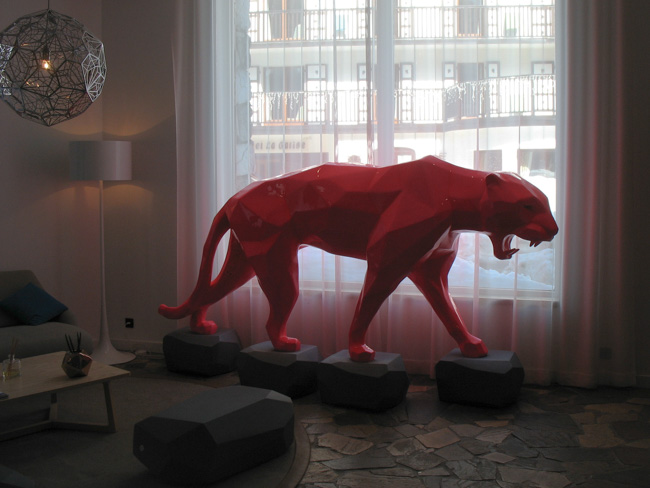 This "pink panther" enlivened the hotel lobby. Similar sculptures of bears, gorillas and other animals appeared throughout the area. 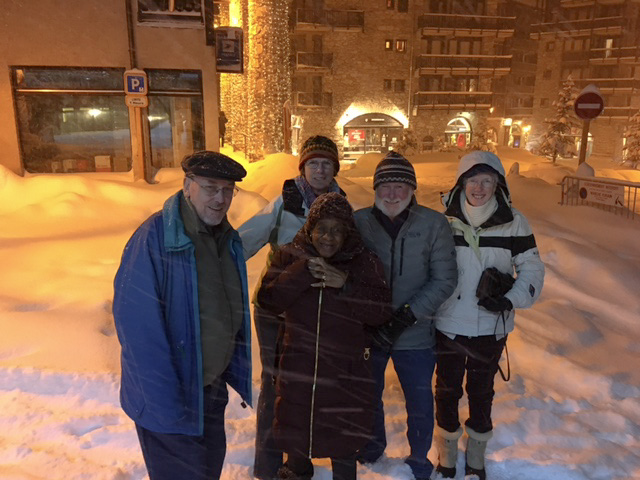 The second night of our stay, Jim and I had dinner with Mike, Eloise & Inge at the aptly named Le Blizzard. It was snowing heavily so the hotel provided us with a van to get us to the restaurant. After our meal, the restaurant's hotel did the same. We were well-taken-care-of! 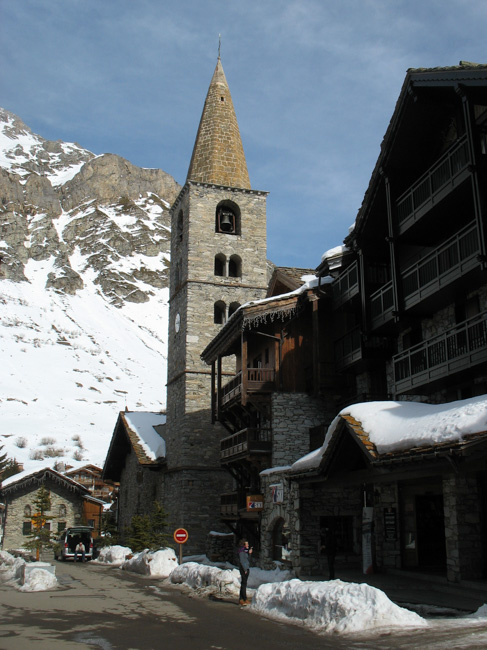 The following night many of us attended a concert as part of the Classicaval Music Festival. We enjoyed selections from Mozart, Shubert, Tchaikovsky, Fauré & Puccini. I was surprised that there was only one French composer, but from what I could understand of the discussion before each piece (in French, of course) all of the composers had been influenced by French connections.

The church, dedicated to St. Bernard of Menthon, dates from 1664. Unlike many parish churches, it escaped the ravages of the French Revolution. 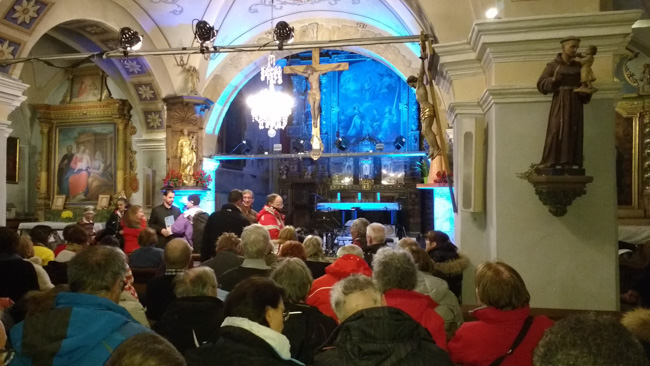 Tuesday's concert was sold-out. We got there early to get good seats. It was a lovely church and if we ever get back I hope to take the formal tour.

Following the concert we attended a reception in the city hall across the street to meet the artists. Wine and a variety of snacks served as the evening's supper.

Thursday was the day for street parties. This "ice bar" was set up in the middle of the main square. Everyone seemed to be having a good time. There was supposed to be a parade later on, but we missed that. 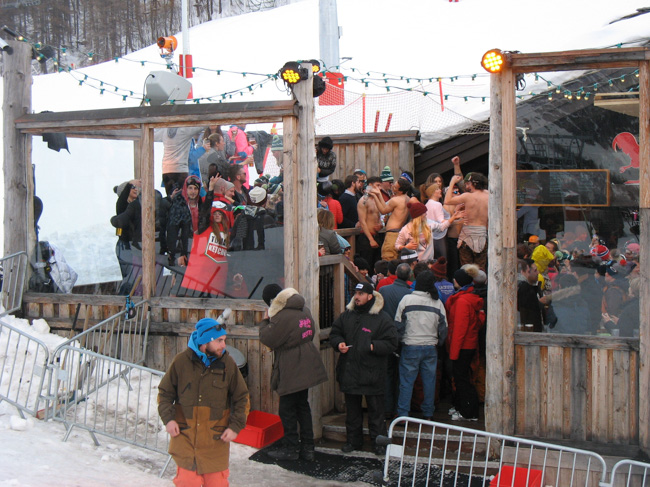 Across the slopes in the condo village there was a much less restrained celebration going on. The boom-boom of the music was invigorating. The guys in the grey coats by the door were security guards. It wasn't clear if this was a private party or if they were just trying to keep the participants from getting smothered. 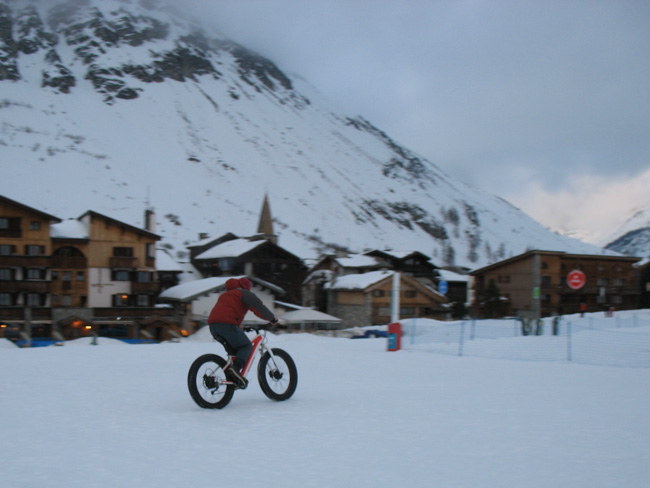 Cyclists zipped back and forth between parties. 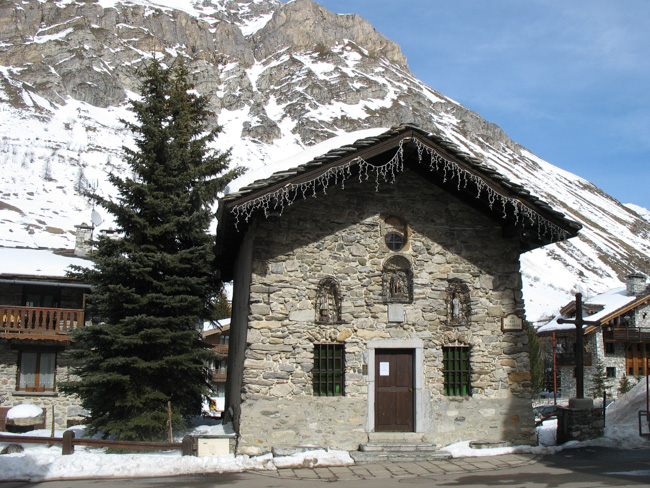 Later in the week Jim and I spent an afternoon exploring the town.

This small chapel on the same square as the church is dedicated to St. Roch. A plaque on the building states that it was constructed in 1653 as protection against the plague, which makes it slightly older than the church. 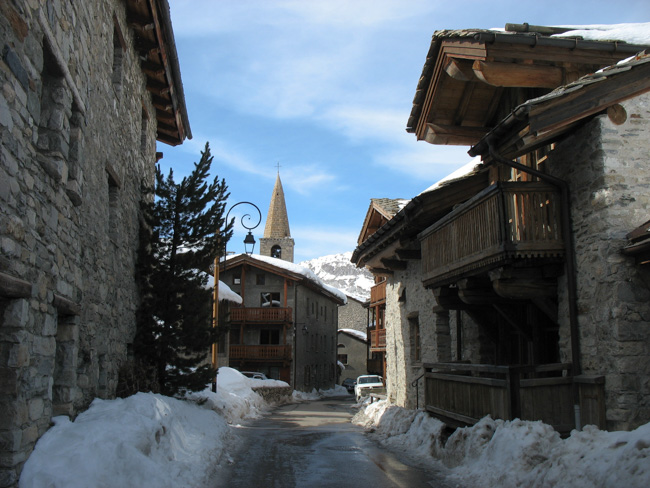 A street in the older part of town near the church. Most of these buildings have been adapted for restaurants and holiday apartments. Some also seemed to be residences.

There was nothing to identify this old building, but it typifies a design style that I saw described elsewhere. There are doors on two levels -- the lower one is partly hidden behind the snowbank and there is another one above it. This allowed entry during times of heavy snows.

Mortises in the stone face may have held galleries and exterior stairs. The highest level door would have opened onto the gallery. 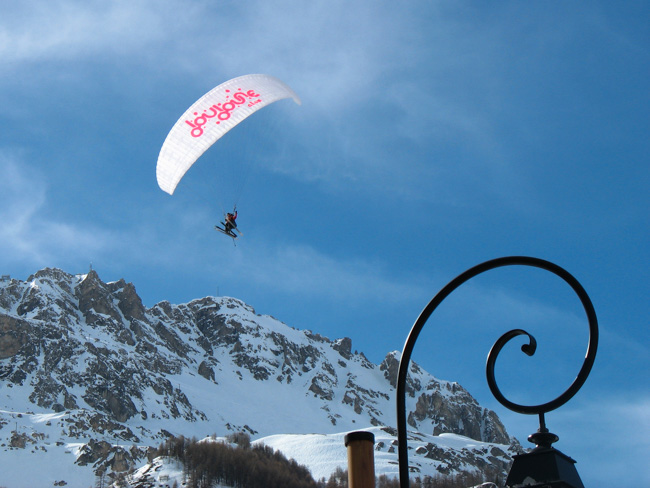 We stayed at Le Brussels on our first visit to Val d'Isère in 1985 -- 32 years ago! The town has changed since then, but the Brussels looks the same -- at least on the outside. We walked inside and didn't recognize a thing. The location is still the best in town!

On our second trip we stayed in the Mercure, which we were unable to find under that name. We think it is now named the Ormelune. It was not a place of fond memory! 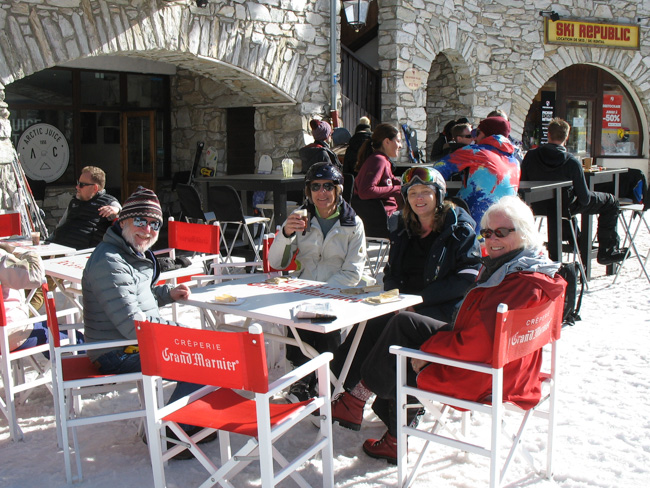 No trip to Val d'Isère would be complete without a stop at the Crepêrie Grand Marnier. It was just as good as we remembered. Jim is joined by Inge, Gwen & Alice. 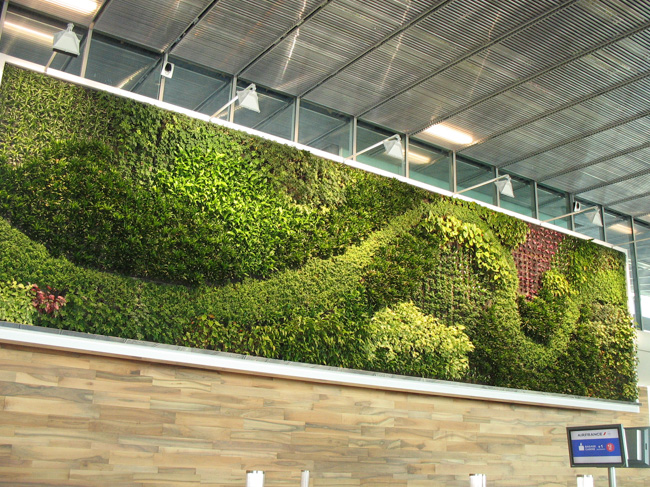 We had a wonderful stay in France, but were glad to be headed home. We crawled out of bed well before dawn for our bus ride back down the mountain to Lyon for the flight home. The Lyon airport had several of these green walls. I'm now puzzling over how I can do something similar at home.