We started Saturday at the market in nearby Belley (bell-LAY) to select "fixin's" for Sunday dinner. Then the four of us explored the nearby Savoie region. This area only became formally part of France in the mid-19th century. Prior to that time it was an independent duchy. 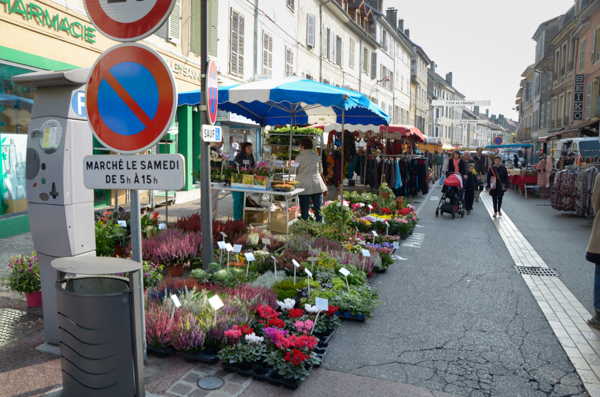 The market, like others we had visited, included everything from flowers to clothes, hardware, prepared food, produce, meats, etc. It was a popular gathering place and Christiane met several friends. She introduced us to them all.

Carl told us that he was concerned when she bought the country house because he was afraid she would be isolated away from the city, but she said that everyone was so welcoming and she had made many new friends. We were see even more of them at Sunday dinner.

There always seems to be at least one paella stand at these markets. We've heard from Agathe since returning that there are some distinctive French ingredients to paella, but we've not yet found out what those are. Jim is curious, but I'm not a fan of paella so it's not like we're going to go out and make some.

This stand also offered tartiflette. That was hard to pass up!

There is a Muslim couple in traditional dress toward the right of the image. We saw many such folks in Belley. When I asked, Christiane agreed that there had been much immigration from former French-ruled areas such as Morocco and Algeria. She and her family had in fact lived in Algeria for a time themselves. She felt that the Muslim influence was going to increase if only because of their higher birthrate.

The Canal de Savière connects the Rhône and Lac du Bourget. Depending on relative water levels, the flow may either be from the lake to the river or the reverse.

The natural waterway, which has been used since Roman times for transportation, has been enlarged and straightened to facilitate transportation. It was used to transport merchandise between Savoy and points east to the settlements along the Rhône.

Steamboats were first used on the canal in 1838 and by 1855 there were four boats daily running between the lake and the river.

Nowadays the canal is primarily appreciated for its beauty and the wildlife along its course. 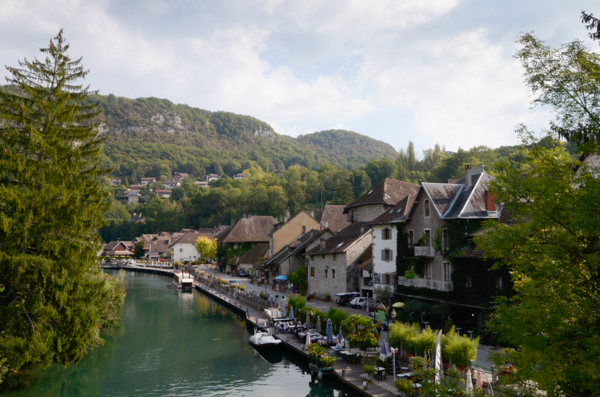 We had lunch in Chanaz, located on the Canal de Savière.

Although we would have liked to dine on the terrace, it was too cool for that. Not to worry, the welcoming fireplace inside had its own charm. 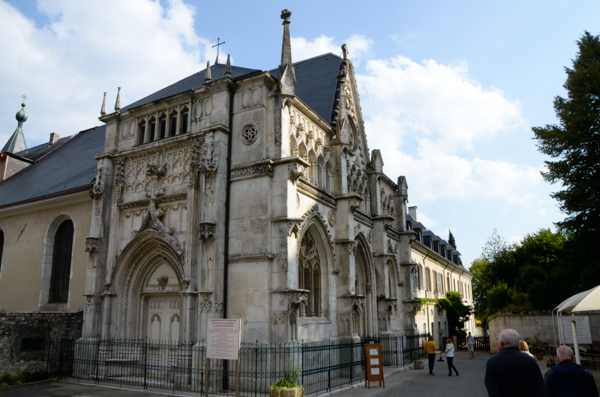 After lunch we visited the Abbaye d'Hautecombe founded in the 12th century on the banks of Lake Bourget. The abbey has a checkered past, which can be seen in the write-up at the link, but it is now serving as a retreat center for the Christian ecumenical group Chemin Neuf. Several families were arriving for a week's retreat.

We took an audio tour of the main church of the abbey, but the building has been heavily "restored" and there is not much that remains of the original. 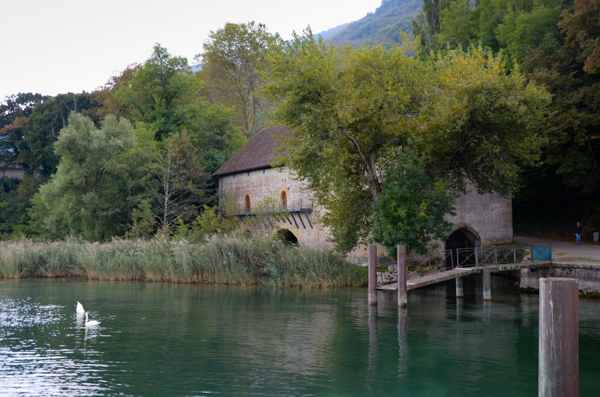 The "boathouse," constructed from the 13th century, is the oldest extant building on the property. Boats arrived under the building using the water entrances that can still be seen. It wasn't clear from the displays at the site if the boats were making deliveries, picking up grain and other products produced at the abbey, or both.

There had been warehouses, mills and other buildings located in the area that made it a major agricultural shipping point in the abbey's early days.

At the time we were there the interior was being set up for a musical performance. Sound-check is the same the world over!

As I mentioned, families were arriving for a retreat session. The children appeared to be participating in an organized program of their own. I gathered this was a period of "recess" where they could get out and run off some energy. 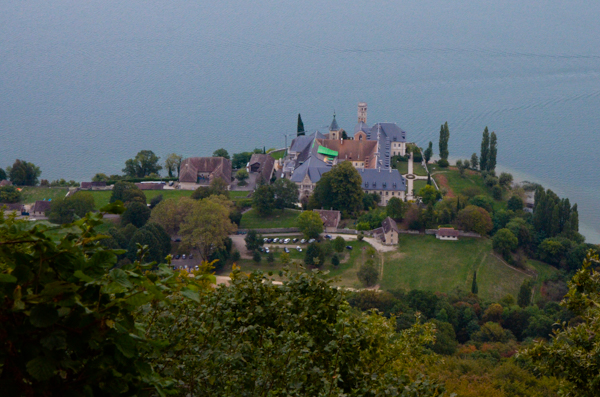 We left the abbey and headed over the ridge dividing the lake from our next destination. This overview gives a good feeling for the extent of the abbey's property.

There are numerous hiking trails throughout this area. Both Carl & Christiane are avid hikers, but in deference to their soft friends we stuck with the car. 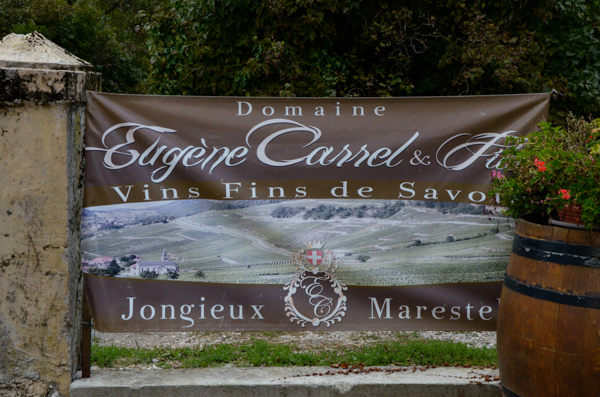 Our next goal was to sample wines at Domaine Eugène Carrel & Fils, a favorite of Carl's & Christiane's. The staff was receiving a load of newly harvested grapes, so we had time to wander around the village until they opened the tasting room. To see pictures, check out the link.

The village, Jongieux, was NOT one of the prettiest in France or the recipient of prizes for being covered in flowers. Although it is a perfectly nice village, its claim to fame is the wine.

We had first tried Savoie whites while skiing in Chamonix many years ago. This was our first encounter with the reds. 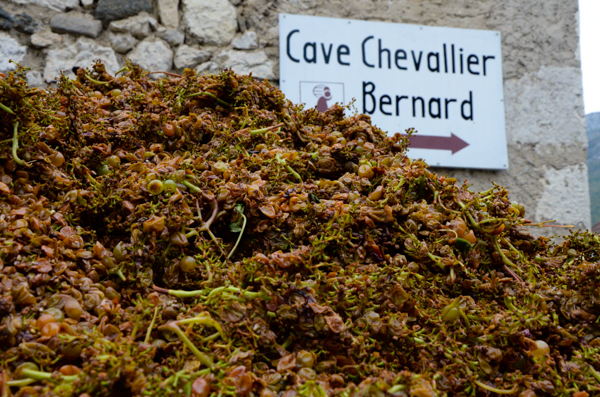 While wandering through the village we came on a dumpster holding discarded pressed grapes. Christiane was ecstatic because she was planning to serve sausage for Sunday dinner and her grandmother, the one who had the château, always insisted that the best way to cook sausage was with freshly pressed grapes.

After getting permission, she nabbed a selection of grapes for the next day. (Yes, the sausage was delicious!)