The next morning our bus tour was billed as "what is left of" Christchurch after earthquakes that occurred over a six-month period from September 2010 to February 2011. A visit to any disaster area is sobering, especially after enough time that things "ought to be" back to normal but never are. Suzanne said that this was the first program to Christchurch since the quake that could be housed in a downtown hotel. We stayed in a Novotel that had been under construction at the time of the disaster. It could be retrofit and completed in a shorter amount of time than it takes to tear down and replace damaged buildings. Christchurch lost something like 4000 hotel beds and is slowly getting them back. We saw lots of "NO VACANCY" in the areas that were least affected. 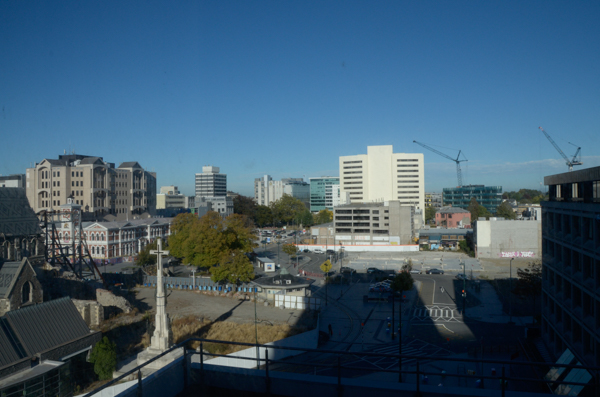 When we asked about which downtown buildings were affected by the quake, the answer was "all of them." This is the view from our hotel room window.

All of the vacant lots had been buildings. The building on the far right was still boarded up. Others were still standing, but condemned.

The Anglican cathedral, just seen on the far left, was in ruins. For several years it appeared that it would never be rebuilt, but the city and the diocese reached a negotiated settlement and construction has begun. In the meantime services are held in a "cardboard" cathedral. 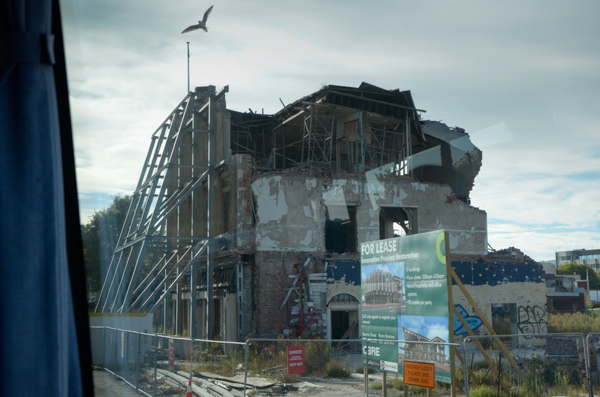 This building shows an intent to preserve the historical facade while rebuilding the fabric of the structure to new standards. It appears that the owner is hoping to attract commitment from potential occupants before proceeding.

In many locations the city has sponsored murals on damaged buildings to prevent graffiti and to give the city a more upbeat vibe amidst the damage. 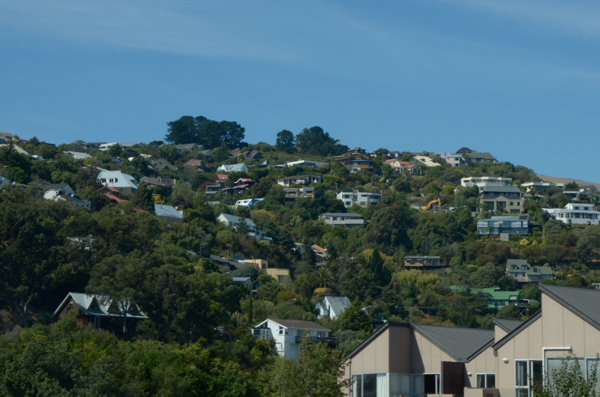 Chas had retired from his farm and moved into a house in this neighborhood shortly before the first quake. He was one of the lucky ones to receive permission to rebuild, but he said it would have been faster and cheaper to demolish the house and start over. The majority of houses in this area were equally damaged. 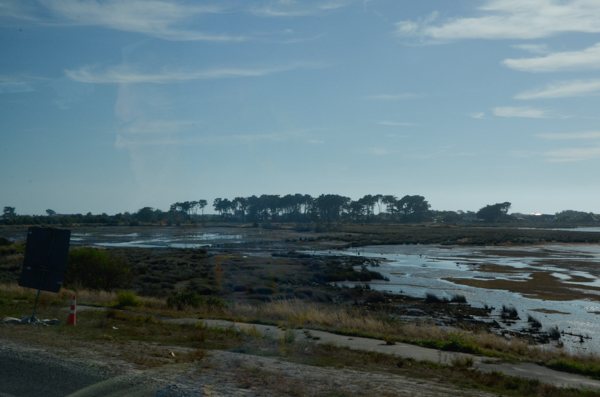 Much of the severe damage was to the east of the city center on reclaimed land. Californians and many others know the dangers of liquefaction in an earthquake. Land with a high water table, often reclaimed land, turns to mud. If it doesn't engulf a building, it jiggles it to pieces. 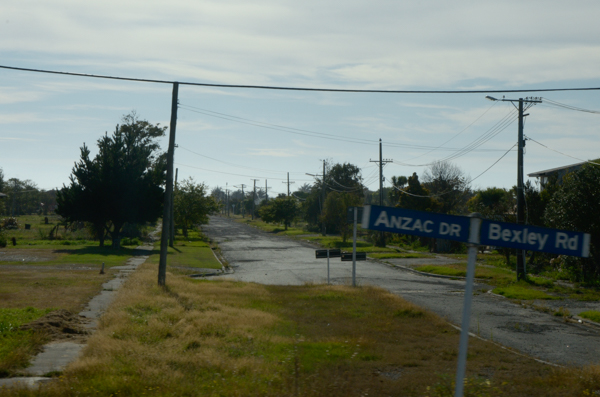 The city has designated entire neighborhoods "red zones" where homeowners are not allowed to rebuild. Some owners have resisted, but the city has terminated services, e.g., electricity, water, sewer, etc., in an attempt to force them out.

Other neighborhoods are "orange zones" with questionable status pending engineering studies. Based on the results they may become "red" or "green."

It is particularly sad at the junction of red and green zones, which may be right across the street from one another.

One aspect of quake damage that I had not heard of before was the tendency of land bordering a stream to slide toward the stream, undermining nearby houses and streets. Perhaps we didn't hear of this so much in California because there are few large streams.

There are numerous such streams in Christchurch, however, and they were desirable locations because of the ambiance. This house is still standing even though its neighbors have been demolished, but it is boarded up.

I have many more pictures of earthquake damage, but it gets too depressing. 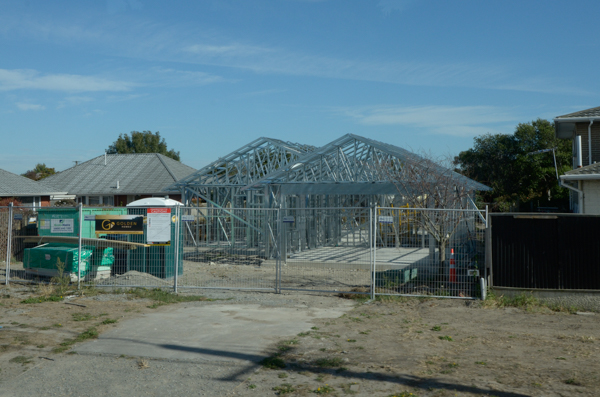 Much of the rebuilding emphasizes metal framing. This is particularly true in commercial buildings that once would have been built with reinforced concrete. Concrete didn't fare well in the quake.

The building standards have changed in the aftermath. The former emphasis was to protect the occupants even though the building's integrity might be sacrificed. As a result of the impact to the urban fabric in Christchurch, the goal now is to preserve both the occupants AND the building. 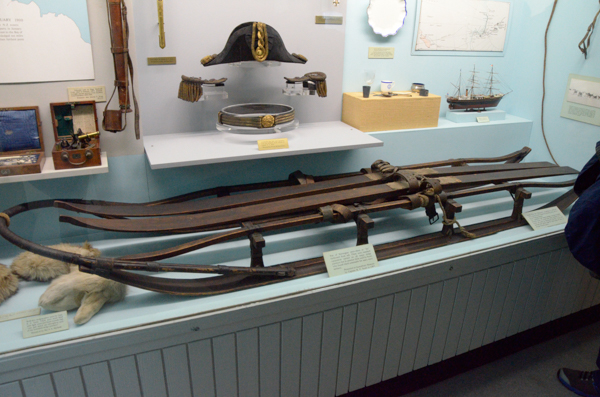 Our next stop was the Canterbury Museum for a guided tour of the Antarctica exhibits. New Zealand is a major embarkation point for Antarctic exploration.

When we visited Antarctica a number of years ago, we read many accounts of early exploration including the attempts to reach the South Pole. This exhibit fleshed out that reading.

This sled and skis had been given to Robert Falcon Scott by Roald Amundsen to help him in his Antarctic exploration, but Scott's team didn't know how to use them effectively and didn't care to learn.

Wikipedia has an analysis of the differences between the Amundsen and Scott expeditions that effectively summarizes what we gleaned from our reading. 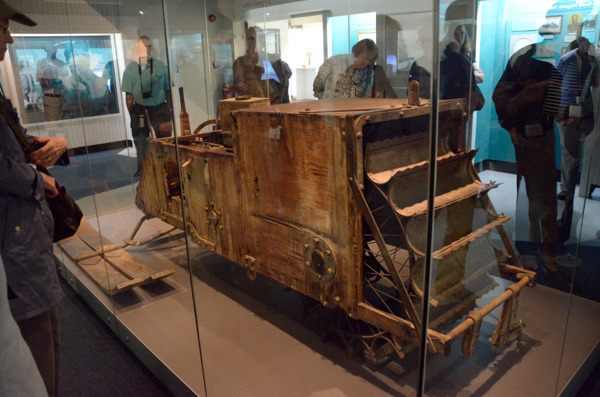 The leader of our tour was Roger Fyfe, senior curator of anthropology, who has made several visits to Antarctica to catalog and preserve remains there. This is one of the original motorized sledges used on Scott's expedition of 1912. Scott was enamored of technology, but the existing state of knowledge didn't measure up to the harsh conditions and the sledges didn't work.

Much was learned about how to improve them, however, and these are the recognizable prototype of the snowmobiles of today. 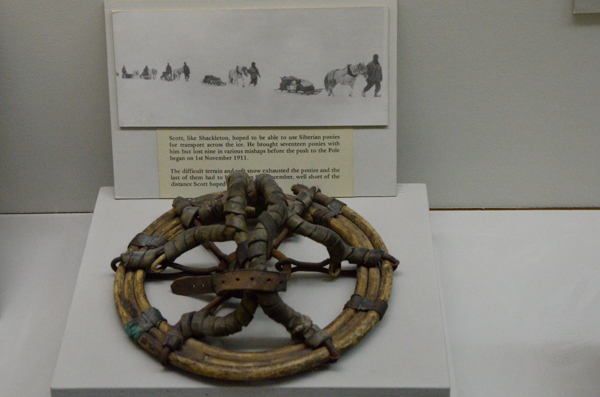 Another misstep by Scott was his insistence on using ponies instead of dogs for pack animals. Dogs were superior for a number of reasons, not least of which is that you can use a dead dog to feed other dogs.

Scott's team made many errors in the procurement and management of the ponies, such as the reluctance to use these "pony snowshoes." The ponies broke through crusted snow and become exhausted. They were eventually shot and Scott's men had to haul the sleds themselves. 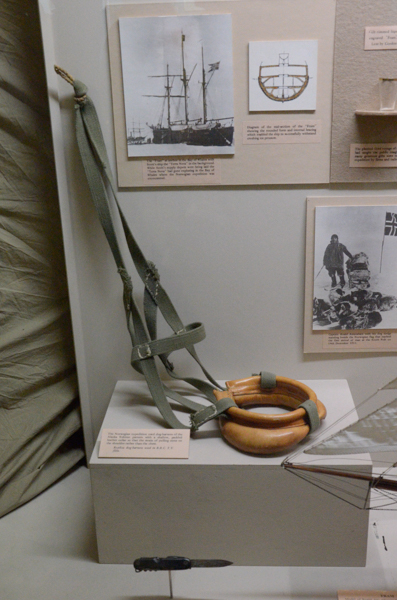 I was glad to hear Dr. Fyfe give Amundsen his due in the presentation because often Scott is treated like a romantic hero who "should have been" the first to reach the South Pole. Amundsen succeeded where Scott failed because he was an experienced professional who weighted risks and allowed for mishaps. Scott did neither.

I don't remember reading about this enhancement introduced by Amundsen. It is a (reproduction) dog harness that includes a pulling collar similar to that used by draft horses. It enables the animal to haul his load without undue stress on his shoulders. It's an example of the thought and planning that went into the Norwegian expedition. I recommend his book The South Pole for anyone who is interested in polar exploration. 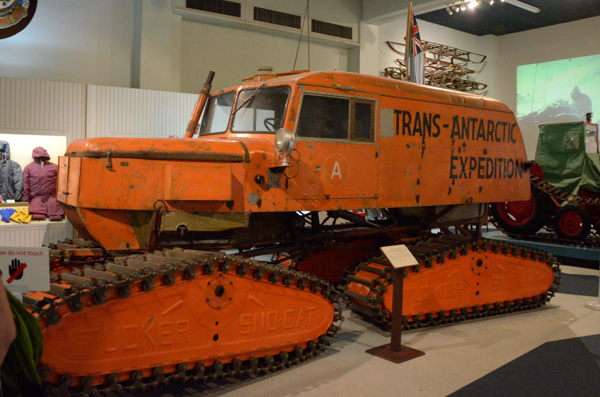 This Sno-Cat was used in the successful Commonwealth Trans-Antarctic Expedition of 1957-58. By this time engineers and designers understood much more about how machinery behaves in extreme conditions.

The descendent of this vehicle makes life better for skiers worldwide today! 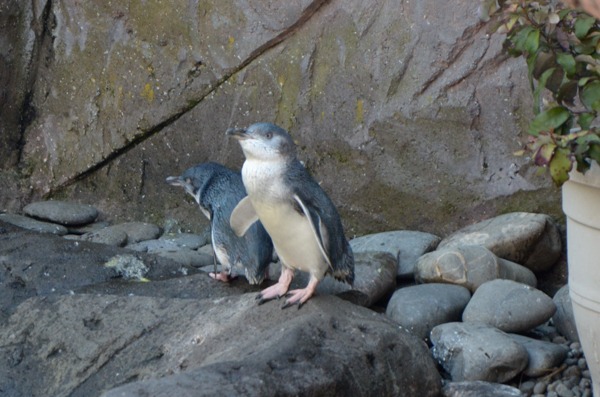 These two slides are out of sequence, but they continue the Antarctic theme. On the day we left New Zealand we visited the International Antarctic Centre located at the airport. It has a section for Little Blue and White-flippered Penguins that are unable to survive in the wild. These two are enjoying the warm weather. 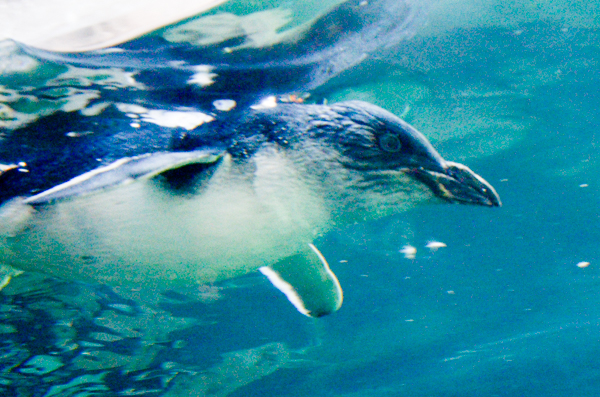