We regretfully bade goodbye to Turangi. The Turangi Bridge Motel where we stayed was my favorite of the entire trip. It had picnic tables on the levee along the river that were a great place to have a beer with your fellow travelers and a nice deck ditto. Bring bug spray, though. The food was delicious, the wine list adequate, and the staff accommodating. And best of all ... free unlimited wi-fi. Only one other place had this benefit.

Our next destination was Wellington, the capital of New Zealand. 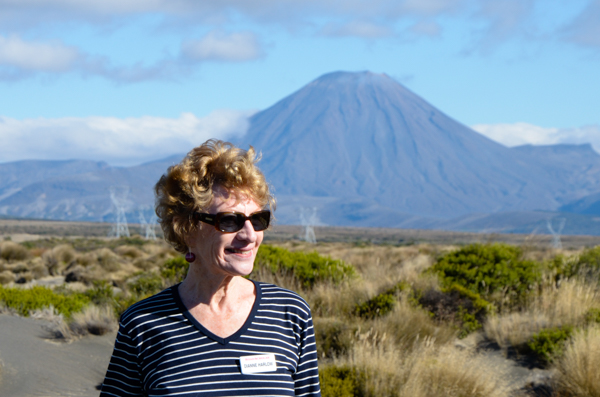 Our route to Wellington took us by the mountains again -- this time on the opposite side.

This picture of our Site Coordinator, Dianne Harlow, is in front of Mt. Doom -- or at least the mountain used for the model of Mt. Doom in the Lord of the Rings trilogy.

Dianne and Suzanne made a great team and really enhanced our enjoyment of the North Island.

Another vital member of our North Island team was our bus driver Tony. He was a great tour guide himself. He had been most places on the island and knew many obscure and fascinating facts about them. 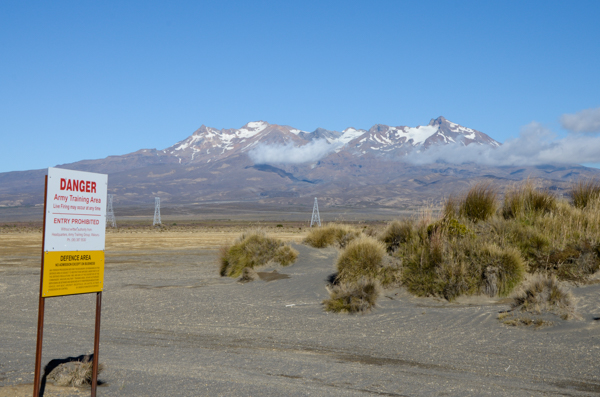 This is Mt. Ruapehu from the opposite side. The military training area isn't any bleaker than the volcano's flanks.

The road south is called the Desert Road because of this landscape. Suzanne told us a harrowing tale about getting caught on this road one winter in an unexpected heavy snowfall. Although it is flat here, the road later winds steeply through some desolate canyons that would be quite unnerving in the snow.

Once we were down off the high plateau we came into an area of sedimentary rocks and hills that had been formed by tectonic rather than volcanic activity. This bank has been eroded by the Rangitikei River in front of it. The sediment layers are obvious.

One of the fabulous things about NZ was the variety of landforms that changed dramatically within short distances.

Other parts of this river were used in filming the Ring trilogy. 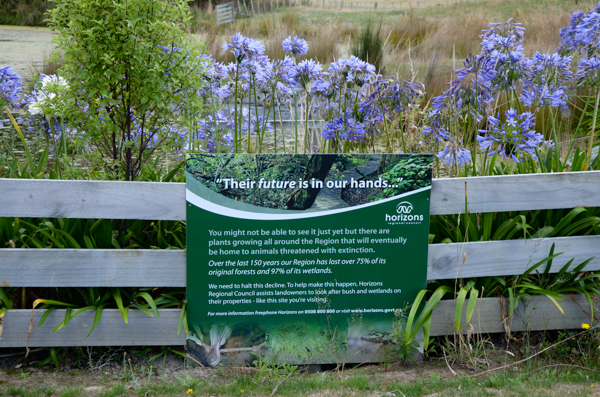 We stopped at a roadside business that offered snacks, coffee, and amusements for the kiddies as well as restrooms.

I walked around back and found this area of wetland restoration. Unfortunately, in spite of the sign touting native plants, the area was extensively planted with invasive non-natives such as the blue agapanthus. Not clear on the concept! Nevertheless there were a number of ducks enjoying the pond. 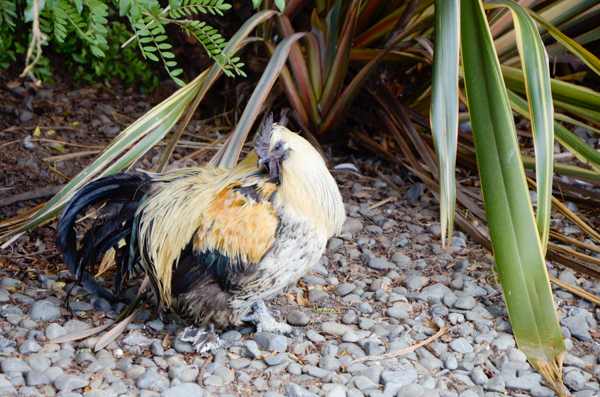 They also had a number of exotic chickens including this handsome rooster. 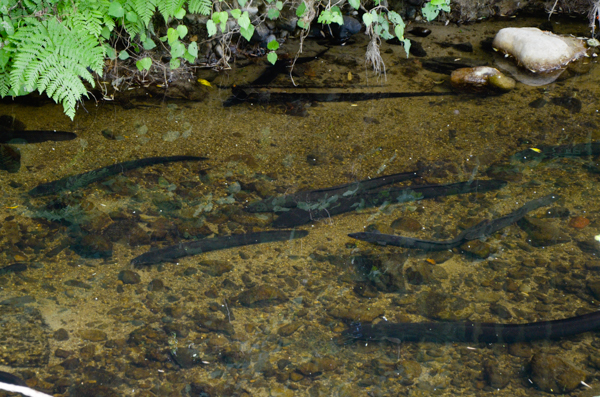 We stopped for lunch at a restaurant owned by a transplanted American! It is named the Quarter Acre Café Bistro and it was good.

The stream out back was populated with eels. The owner told us that eels normally migrate, but he has been feeding these and they seem to have settled in. I hope he isn't fattening them for next week's menu!

We arrived in Wellington in the rain, during the Friday afternoon rush hour. It was not an auspicious beginning. Because of the hills running through the city, the traffic, and the narrow streets that made it difficult to turn the bus, we had to take a very out-of-the-way route to get to our hotel, which was well-located right next to the city center.

Our room opened onto a large plaza with this view of the harbor. 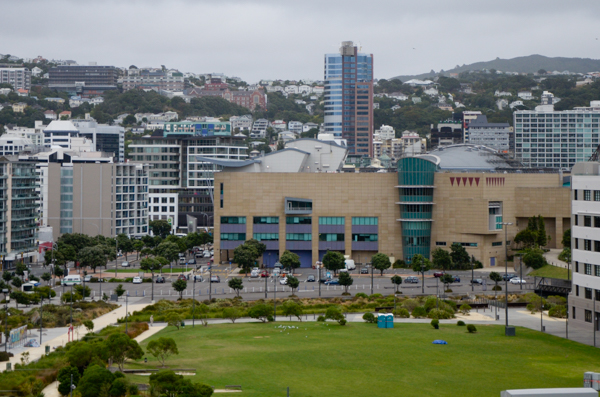 The plaza also overlooked the Te Papa Tongarewa Museum of New Zealand -- the tan building. We would visit it later. 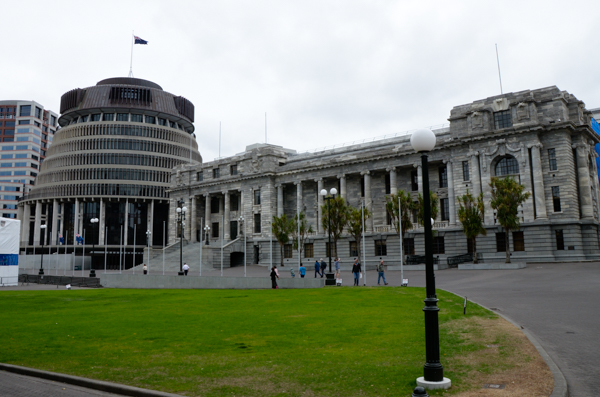 The following morning we heard a lecture on the New Zealand political system. It is a constitutional monarchy with an electoral system very different from ours. Details are at the link, but surprising facts are that each voter has two votes and that the legislature usually has 120 members, but may have more depending on the voting.

One goal of their system is to ensure that no single party gets complete control of government. The main goal of our election system often appears simply to re-elect the incumbents!

The round building holds the equivalent to our cabinet. 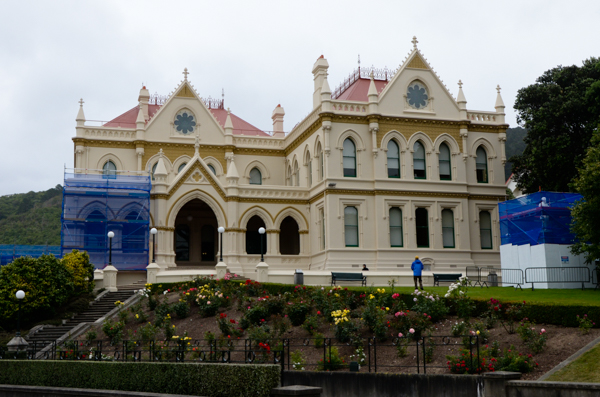 The Parliamentary Library is the only building that survived a devastating fire in 1907 that destroyed the adjacent governmental buildings.

The most memorable part of the visit to the Parliament buildings was getting to see the base isolation technique being retrofitted into the buildings for enhanced earthquake protection. NZ raised the minimum resilience standards after the deadly 2011 Christchurch quakes. 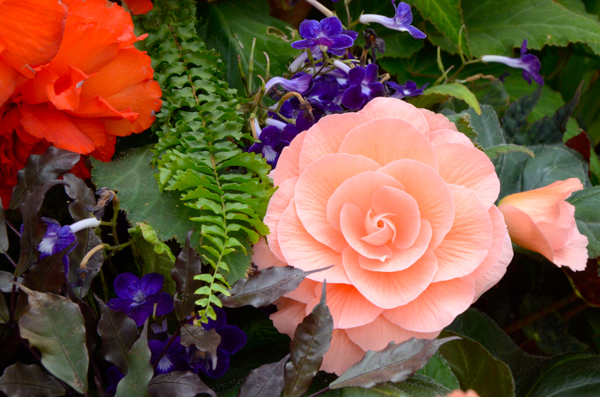 After lunch we took a funicular to the Wellington Botanic Garden. We had a lovely walk through the gardens, but I could have spent much more time there. 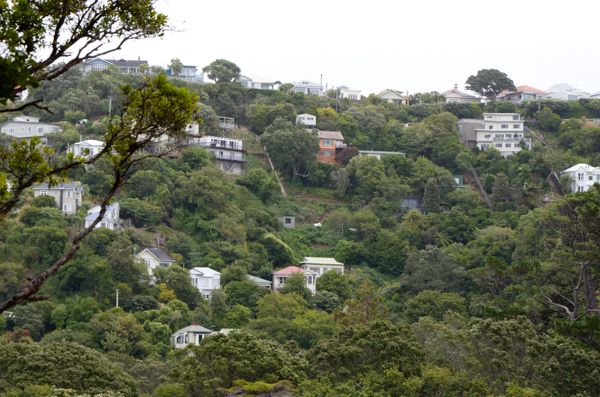 Many residential neighborhoods of Wellington cling precariously to the steep hills.

The narrow diagonal structures seen here and there are tramways used to access the houses! 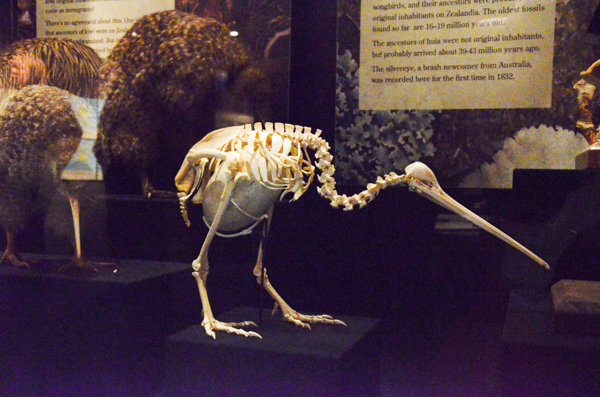 The next morning we visited the Te Papa Museum. Our guide took us on a fly-by of the exhibits that we could then visit at our leisure. Many of our number spent the entire afternoon in the museum, but Jim and I were "brain full" of sights, sounds and information.

I was most interested in this kiwi display. The kiwi has the largest egg relative to body size of any bird on earth and this exhibit really shows that.

Another skeletal exhibit was that of Phar Lap, the racehorse.

Adjacent to the museum was this farmers' market. It was jammed with tourists and locals alike. We bought apples to snack on and burritos (!) for lunch at one of the food vendors. 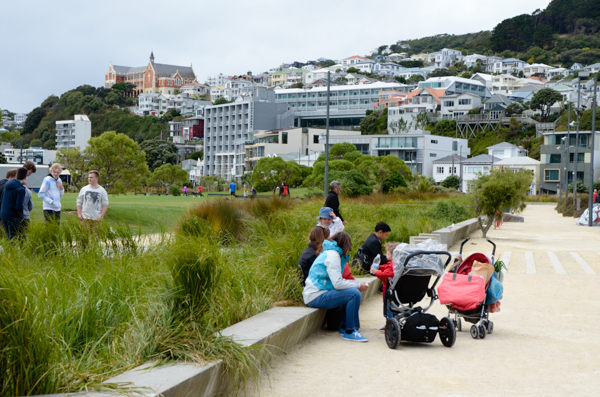 The park next to the market was a favored place for families to rest and picnic. A nearby skateboard park was crowded with kids polishing their moves.

One youngster in a motorized wheelchair was having a ball swooping around while his dad kept watch.