The following day we took the bus down to Plaça Catalunya, the starting point for our walk down Las Ramblas. This street was originally a river running along the edge of the old city. There were several no longer extant neighborhoods or religious institutions that are remembered by the names along the street. That is the reason that the name of the street is plural: Las Ramblas is the sum of La Rambla this & La Rambla that.

Up until the 19th century Barcelona was enclosed by a city wall. Most city walls are designed to keep people OUT, but in Barcelona it was designed to keep the citizens IN. The city had been a hotbed of revolt for centuries and the Spanish government used the wall to keep them under control. Likewise the fortress that tops Montjuic had its cannon pointed AT the city rather than out to sea. When the citizens were finally allowed to remove the walls, they were almost completely demolished. There was one small section left.

The Roman walls, however, can still be seen in many locations -- sometimes even inside shops! 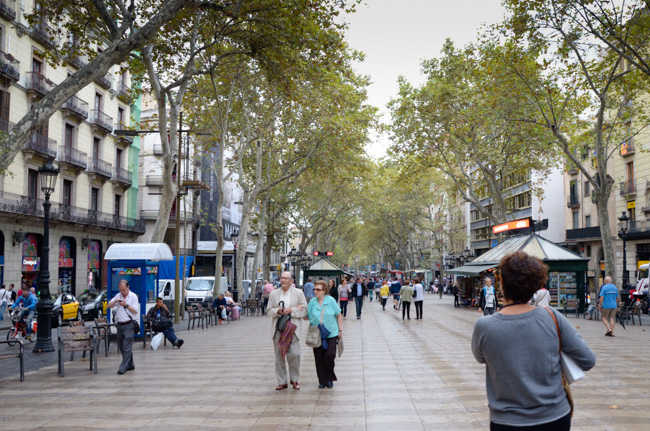 At this point in the early morning the crowds haven't come out yet. The weather was gloomy to start and became drippier as the day progressed.

But we were all determined explorers and nothing would dampen our enthusiasm.

Luisa (in the blue sweater) is leading her intrepid band. The radio listening devices enabled her to lecture while we walked.

One of the many colorful buildings on Las Ramblas is the Casa Bruno Cuadros also known as the House of Umbrellas. It had been remodeled in the late 19th century. Since there was an umbrella shop in the house, umbrellas, fans and other eastern motifs, such as this wonderful dragon, make it distinctive. 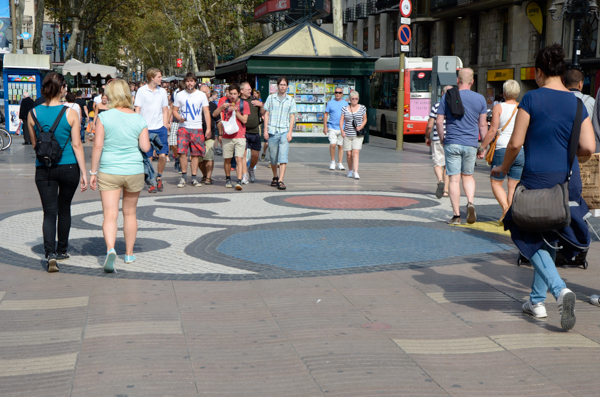 It's not every pedestrian mall that has an original Miró in the pavement. Luisa said that she found herself unable to walk on the artwork, but these folks do not suffer from that restriction.

The van driven by the terrorist who drove through this crowded pedestrian street stopped near this medallion. It was a mercy that more people weren't injured or killed.

CaixaBank, or La Caixa (appropriately pronounced CASH-a), a major bank with its HQ in Barcelona, also has a Miró-designed logo. 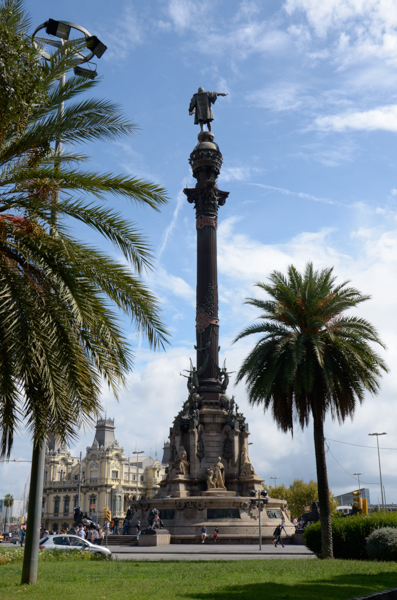 At the seaward end of Las Ramblas is a monument to Christopher Columbus.

According to local lore, on his return from his inaugural voyage to America Columbus met Ferdinand and Isabella in Barcelona. Some historians disagree as to the exact location.

This monument was completed in 1888. Ironically the statue's gesture toward the sea is pointing away from the Americas. 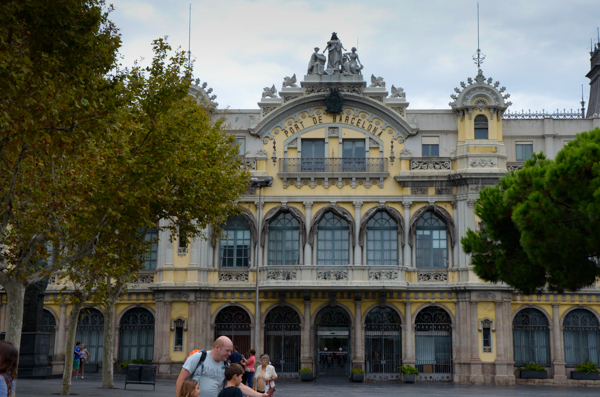 Not every turn of the 20th century building in Barcelona was in the modernisme style. This customs house, completed in 1902, was designed by Enric Sagnier, a contemporary of Gaudí and Domènech. It is located by the old port across the street from the Columbus monument (see it to the left of the monument in the picture above). 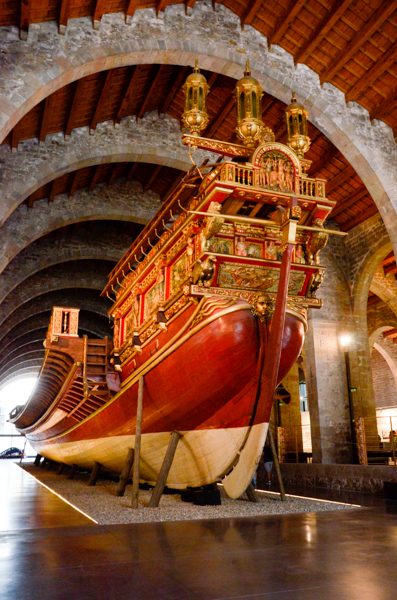 When we reached the Columbus monument the group session was over and everyone scattered to the winds. Jim and I went to visit the medieval shipyards, now the Barcelona Maritime Museum. There was an interesting traveling exhibit on the Vikings, which had originated at the Swedish History Museum, but the standout (besides the building itself) was this galley.

It is a reproduction of the flagship of John of Austria, illegitimate son of Charles V and half-brother of Philip II of Spain (of the infamous Spanish Armada). He commanded the triumphant naval forces of Spain, Venice and other allies in the 16th century Battle of Lepanto, which ended the Ottoman threat in the Mediterranean.

Cutaways in the side of the galley showed how it was provisioned and staffed. 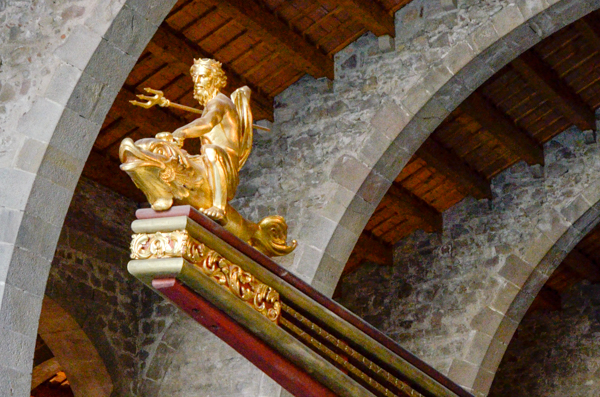 The prow of the galley featured this ornate ram. All in all it was a scary looking ship. 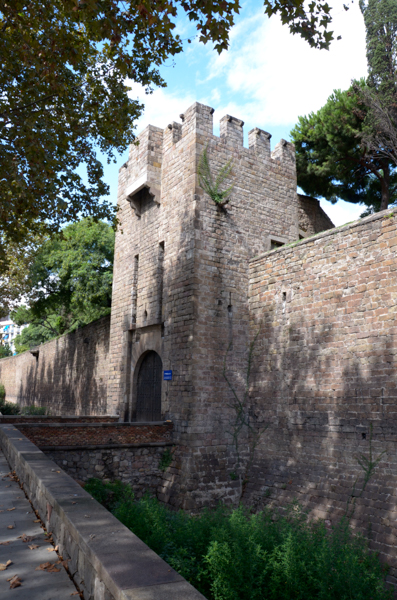 After touring the museum, we decided to walk up to La Boqueria for lunch.

This is the only surviving segment of the medieval wall. It was built in the late 14th century at the same time that the shipyards described above were enlarged. That enlargement incorporated part of the wall. 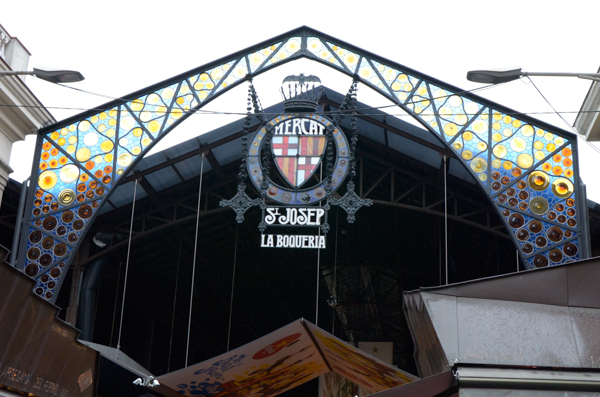 The market known today as La Boqueria has its roots in the 13th century although the current structure dates only to the mid-19th century.

We ran into a couple of friends from the group and had lunch at an adjacent Basque restaurant (although we had pizza!), but many locals will simply buy the fixin's at the market and eat at one of the stand-up tables placed here and there. Click to see pictures of the yummy wares on display. 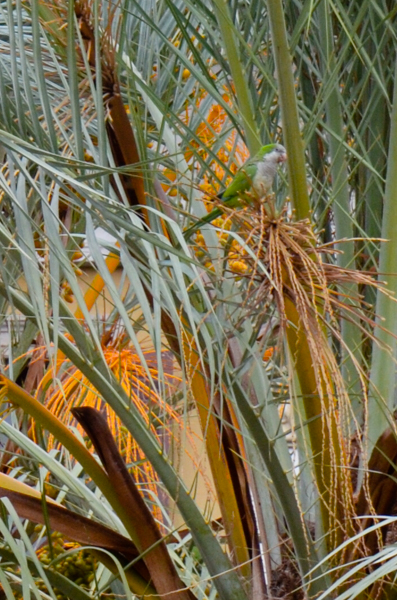 During lunch our friends recommended the nearby Palau Güell. We purchased some tickets that came with a specific entry time. Having about 1/2 hour to kill we returned to the Plaça Reial (Royal Plaza), which we had visited in the morning. I had noticed that it was home to some of the VERY noisy squawking parrot-like birds that I had been unable to see clearly at Park Güell. I was hoping to get a picture and I was successful!

They are Monk Parakeets, a South American species that has been introduced in many places world-wide. The write-up at the link is pretty favorable, but others not so much.

They do make a racket.

There are also some street lamps in the plaza that are very early works by Gaudí. He designed these in 1879, shortly after graduating from architecture school.

We were told that after his graduation from the Barcelona School of Architecture, the Dean said words to the effect: "I am not sure to whom I presented a diploma today, a madman or a genius." Probably something of both.

Pictures of the Palau Güell are on a separate page.

In the evening we gathered after supper to attend a folkloric dance presentation by the Esbart Sant Martí. Unfortunately I didn't take my camera because the group was really very good. The web site is in Catalàn, but at least it has some pictures.